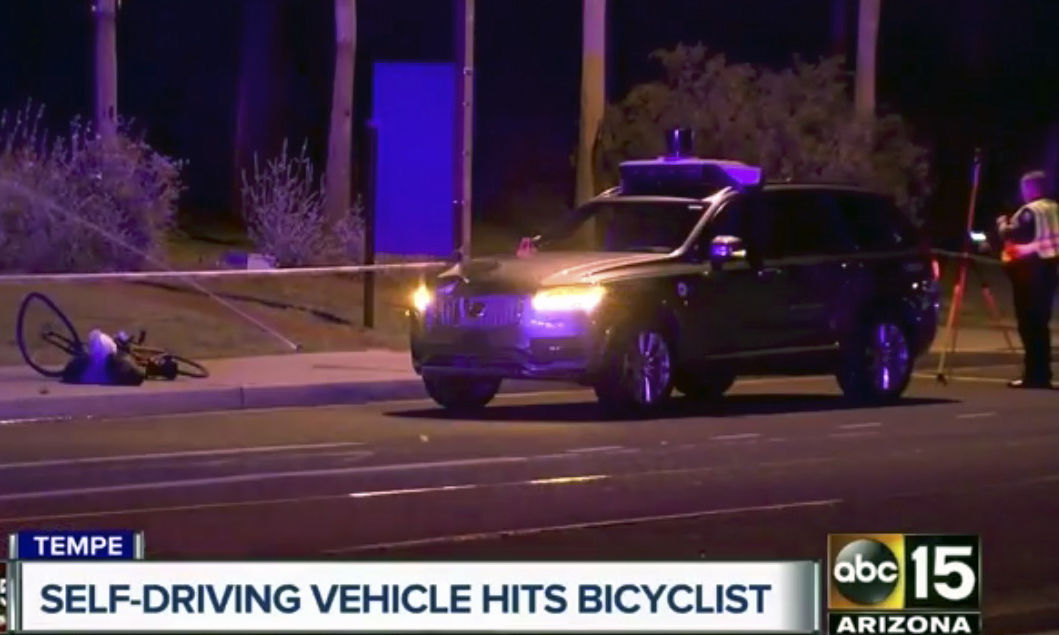 This March 19, 2018 still image taken from video provided by ABC-15, shows investigators at the scene of a fatal accident involving a self driving Uber car on the street in Tempe, Ariz. Police in the city of Tempe said Monday, March 19, 2018, that the vehicle was in autonomous mode with an operator behind the wheel when the woman walking outside of a crosswalk was hit. 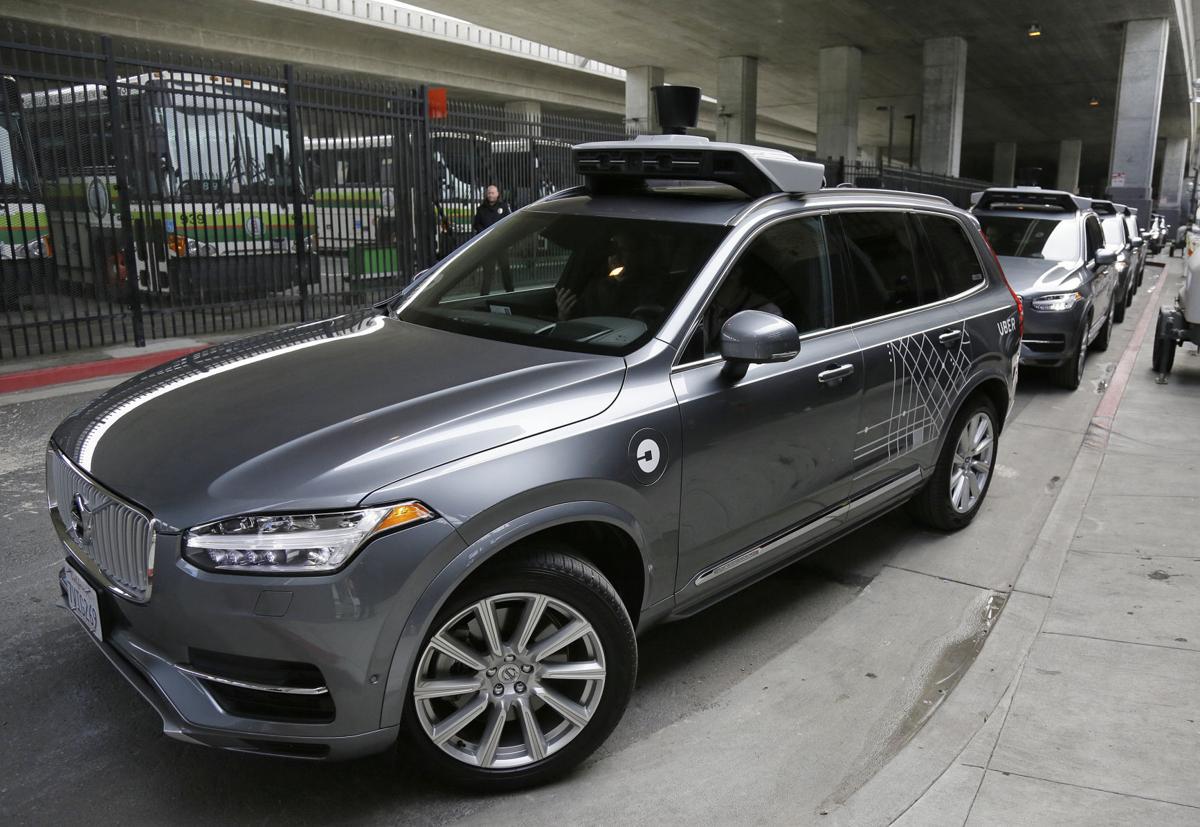 By Felicia Fonseca and Tom Krisher The Associated Press

A self-driving Uber SUV struck and killed a pedestrian in suburban Phoenix in the first death involving a fully autonomous test vehicle, prompting the ride-hailing company Monday to suspend all road-testing of such autos in the U.S. and Canada.

Depending on who is found to be at fault, the accident could have far-reaching consequences for the development of self-driving vehicles, which have been billed as potentially safer than cars with humans at the wheel.

The Volvo was in self-driving mode with a human back-up operator behind the wheel when a woman walking a bicycle outside a crosswalk in Tempe on Sunday night was hit, police said. Elaine Herzberg, 49, died at a hospital.

Uber suspended its self-driving vehicle testing in the Phoenix area, Pittsburgh, San Francisco and Toronto. The testing has been going on for months as automakers and technology companies compete to be the first with cars that operate on their own.

Uber CEO Dara Khosrowshahi expressed condolences on his Twitter account and said the company is working with local law enforcement on the investigation.

The National Transportation Safety Board and the National Highway Traffic Safety Administration said they are sending teams to investigate.

The crash could be a setback for autonomous vehicle research and lead to stricter regulations from states and the federal government, said Bryant Walker Smith, a University of South Carolina professor who studies the technology.

But Smith said more than 100 people die each day on U.S. roads in crashes of human-driven vehicles.

"That's a real contrast that we should keep in mind about this," he said. "We should be concerned about automated driving. We should be terrified about human driving."

The federal government has voluntary guidelines for companies that want to test autonomous vehicles, leaving much of the regulation up to states.

Many states, including Michigan and Arizona, have taken a largely hands-off approach, hoping to gain jobs from the new technology, while California and other states have taken a harder line.

California is among states that require manufacturers to report any incidents during the autonomous vehicle testing phase. As of early March, the state's motor vehicle agency had received 59 such reports.

Arizona Gov. Doug Ducey used light regulations to entice Uber to the state after the company had a shaky rollout of test cars in San Francisco. Arizona has no reporting requirements.

Hundreds of vehicles with automated driving systems have been on Arizona roads.

The crash in Arizona isn't the first involving an Uber autonomous test vehicle. In March 2017, an Uber SUV flipped onto its side, also in Tempe. No serious injuries were reported, and the driver of the other car was cited for a violation.

Herzberg's death is the first involving an autonomous test vehicle but not the first in a car with automated control features. The driver of a Tesla Model S was killed in 2016 when his car crashed into a tractor-trailer in Florida.

The NTSB said driver inattention was to blame, not the vehicle's autopilot system. The agency said automakers should have safeguards that keep drivers engaged.

The U.S. Transportation Department is considering further voluntary guidelines that it says would help foster innovation. Proposals also are pending in Congress, including one that would stop states from regulating autonomous vehicles, Smith said.

Peter Kurdock, director of regulatory affairs for Advocates for Highway and Auto Safety in Washington, called the Arizona crash tragic.

The group sent a letter Monday to Transportation Secretary Elaine Chao saying it is concerned about a lack of action and oversight by the department as autonomous vehicles are developed. That letter was planned before the crash.

Kurdock said the deadly accident should serve as a "startling reminder" to members of Congress that they need to "think through all the issues to put together the best bill they can to hopefully prevent more of these tragedies from occurring."

Krisher reported from Detroit. Susan Montoya Bryan in Albuquerque, N.M., and Jacques Billeaud in Phoenix contributed to this story.

Out of the system, young adults find themselves 'flooded with freedom'

Donald Jayne could have lost everything the day he turned 18 — his housing, his friends, the adults he turned to for support and guidance. Gro…

The union says resources continue to shrink while the city grows.

This March 19, 2018 still image taken from video provided by ABC-15, shows investigators at the scene of a fatal accident involving a self driving Uber car on the street in Tempe, Ariz. Police in the city of Tempe said Monday, March 19, 2018, that the vehicle was in autonomous mode with an operator behind the wheel when the woman walking outside of a crosswalk was hit.