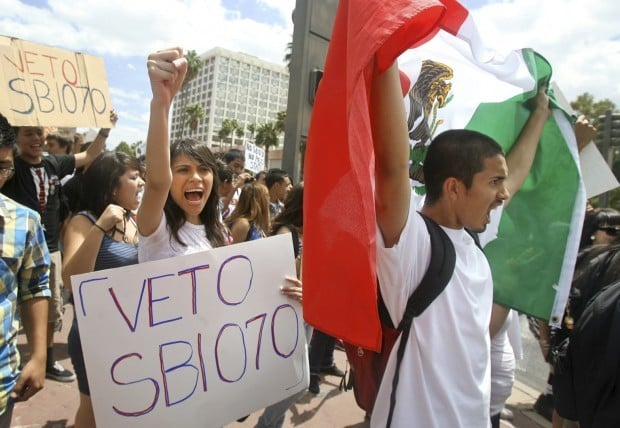 Tucson High School students Arianna Santacruz, with fist in the air, and Izzy Valenzuela, holding the Mexican flag, shout chants during a march on the state office building in Tucson to protest of the controversial SB 1070 immigration bill. 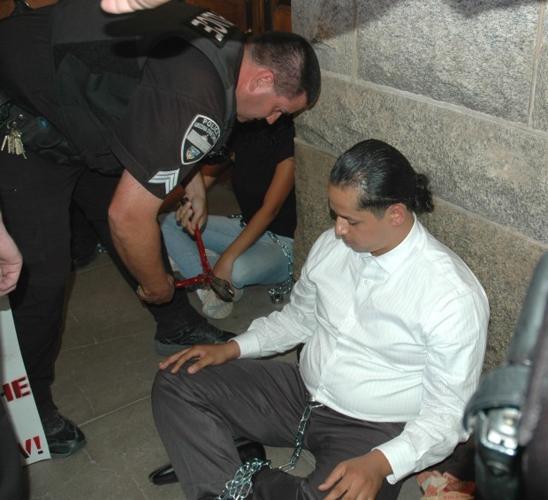 Police cut protesters from their chains before they were escorted from the Capitol building in Phoenix. 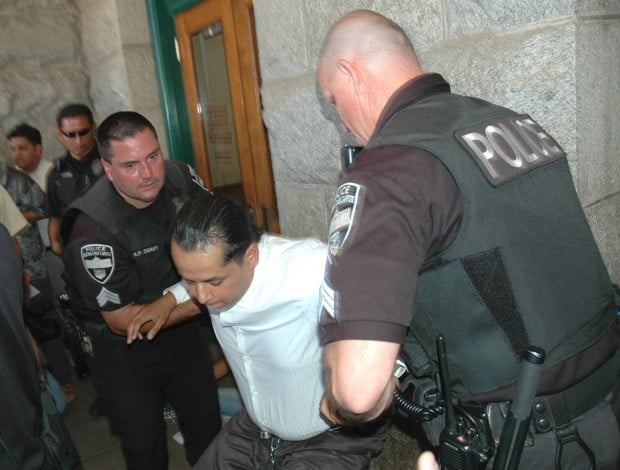 Police take a protester from the Capitol.
By Brady McCombs Arizona Daily Star

Outrage about a state immigration bill that is Gov. Jan Brewer's signature away from becoming law spurred protests throughout the state Tuesday.

A major protest led by leaders from immigrants advocacy, religious and labor groups is going on at the state capitol in Phoenix. A vigil will be held in Tucson this evening.

About 40 Tucson High students walked off of campus this morning to protest the immigration bill, said Principal Abel Morado.

While the Tucson High campus is normally closed, the students left as gates were opened for classmates who do not have full schedules and have permission to leave campus at the lunch hour.

Morado attempted to keep the students on campus by verbally directing them to go to lunch or class but was unsuccessful.

"We invited students to stay and air their grievances, but they were really upset about this immigration issue," he said.

No school escorts were provided to the students. They will receive an unexcused absence as a result.

Tucson High students walked out about 11 a.m. today and gathered briefly at Armory Park, then headed to the state building downtown and joined some 100 other teens. Students tried to get into the building, but the doors were locked. They were chanting, but no damage was reported and a handful of police officers were monitoring the students.

The state Senate gave final approval Monday to a package of changes in state law that proponents say will help crack down on illegal immigration.

SB 1070 would overrule any policy or procedure of a city council or police department that keeps officers from enforcing federal immigration laws. It also says, when practicable, police must inquire about the immigration status of those they encounter as part of their regular activities.

A vigil and protest of the bill by border activists is planned from 4 p.m. to 6 p.m. today in front of the state building downtown, at the corner of West Congress Street and South Granada Avenue.

The Coalición de Derechos Humanos has planned a protest and candlelight vigil for later today from 4 to 6 p.m. at the state building at the intersection of W. Congress St. and S. Granada Ave. in Tucson.

The bill's architect, Sen. Russell Pearce, R-Mesa, said SB 1070 is necessary because of the political failure in Washington to secure the border. The bill is aimed at what Pearce said is "removing the handcuffs" from local police. But critics say the result will be racial profiling.

But Rep. Raúl Grijalva, D-Ariz., urged Brewer to veto the "unconstitutional anti-immigrant bill" saying that not doing that would result in severe economic penalties for the state.

Tucson police chief Roberto Villaseñor is withholding comment, electing to see the final version of the bill and what the governor decides to do, said Sgt. Diana Lopez, a Tucson Police Department spokeswoman.

Cochise County Sheriff Larry Dever supports the bill and believes it comes as a response to the killing of rancher Robert Krentz on March 27 by a presumed illegal immigrant.

“The alternative is to do nothing and doing nothing is getting people murdered and maimed and our lives turned upside down,” Dever said. “That’s not working.”

The “hysteria” at protests is misplaced fear and misaligned priorities, Dever said. The bill won’t be too much work for deputies and it won’t generate racial profiling, he said.

The protests are “a very lame position for people to take that don’t appreciate the professionalism in the law enforcement ranks,” Dever said.

He said the bill would simply give deputies another tool in their bag when they encounter illegal immigrants during the course of their regular work.

“Officers on the street will use their discretion,” Dever said. “And they will reel in those that needed to be reeled in. They won’t be out there doing wholesale immigration roundups.”

But Dupnik doesn’t agree. The law would leave the possibility of racial profiling open to law enforcement leaders depending on how they interpret the law.

“If you are going to take a tough stance and create a squad to go out and seek illegal aliens, then there is a potential for racial profiling,” Dupnik said.

Dupnik said the bill’s requirement for people to show proof of citizenship through “alien registration cards” takes immigration enforcement too far. It’s also unnecessary: his deputies regularly turn over suspected illegal immigrants they come across during their patrols to the Border Patrol.

“We probably do that in greater numbers than any other law enforcement department in the state,” Dupnik said.

But If Pima County Sheriff’s deputies started arresting illegal immigrants in large numbers and putting them in county jails, rather than turning them over to the Border Patrol, it would throw the entire criminal justice system into a crisis, he said.

It would also cost taxpayers more and diminish the county’s primary responsibility of keeping the community safe, he said.

If the governor signs it into law, his department won’t take any action until the county attorney assesses exactly what deputies must do, must not do and what they may do, Dupnik said.

“I have told people: ‘Don’t let this happen because you will just be doing the federal government’s job,” Estrada said. “It's not our job.”

It's also misguided, he said.

"I'm disappointed because they are painting all illegal immigrants with a broad brush," Estrada said. "Everybody is bad, everybody is harmful, everybody is hurting the economy. That is not necessarily true."

The outcry came from across the country as well among religious, law enforcement and immigrants' rights groups.

In Phoenix, nine young people were arrested this morning after then chained themselves to the doors of the state capitol building.

The president of the state congress in Sonora, Mexico,  Eloisa Flores Garcia, said Arizona will become an unsafe place for families and Mexican buyers, since the police would have the power to detain a person just because you suspect is undocumented, according to El Imparcial newspaper.

"Arizona is no longer a safe place for them to go, because the police will stop you on the streets for not carry proper documentation when fellow citizens who keep them on site to avoid losing them," she said.

PHOENIX - The question of whether police will be required to ask people if they are in this country legally is now in the hands of Gov. Jan Brewer.

The following ran Sunday in The New York Times:

Sens. John McCain and Jon Kyl have joined with others requesting troops on the border by unveiling a security plan that calls for more soldier…

The bill is intended to ramp up law enforcement efforts even as critics complained it could lead to racial profiling.

Tucson High School students Arianna Santacruz, with fist in the air, and Izzy Valenzuela, holding the Mexican flag, shout chants during a march on the state office building in Tucson to protest of the controversial SB 1070 immigration bill.

Police cut protesters from their chains before they were escorted from the Capitol building in Phoenix.