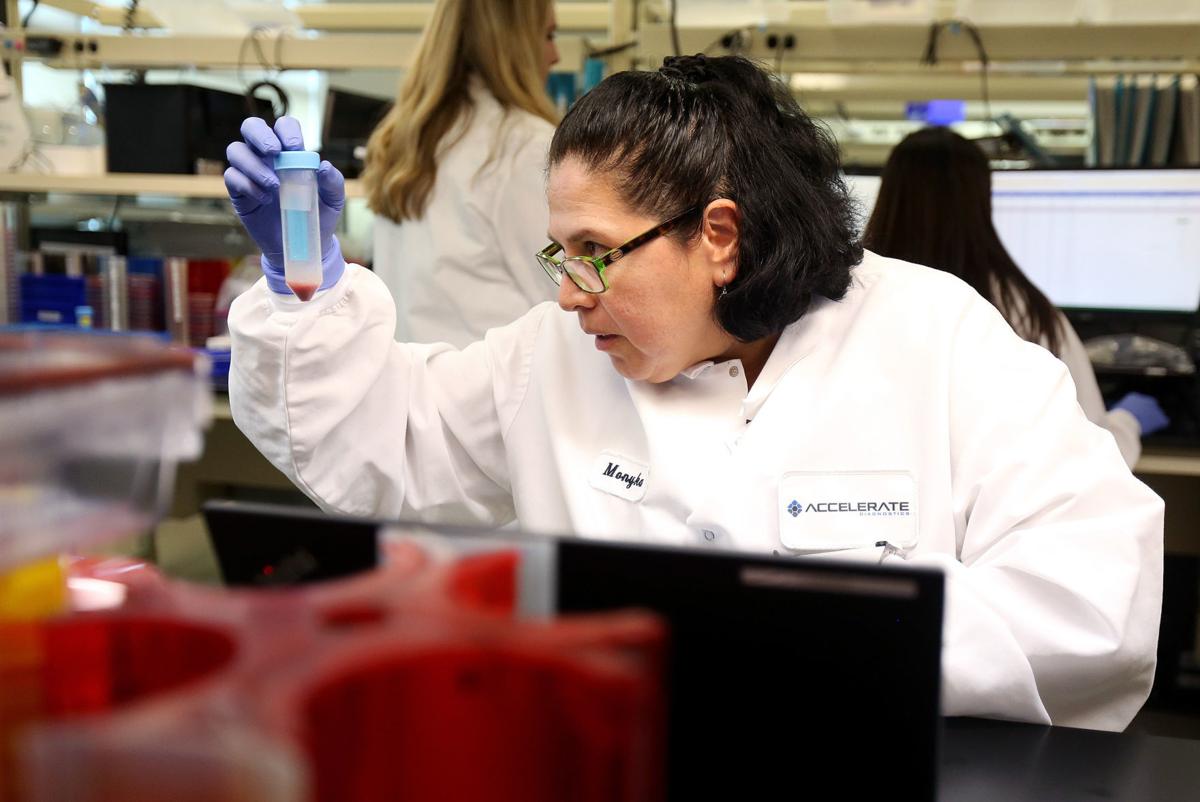 Monyka Salazar, a research associate, examines fluid extracted from a patient’s lung for testing in the lab at Accelerate Diagnostics, which received a $4.8 million PPP loan. 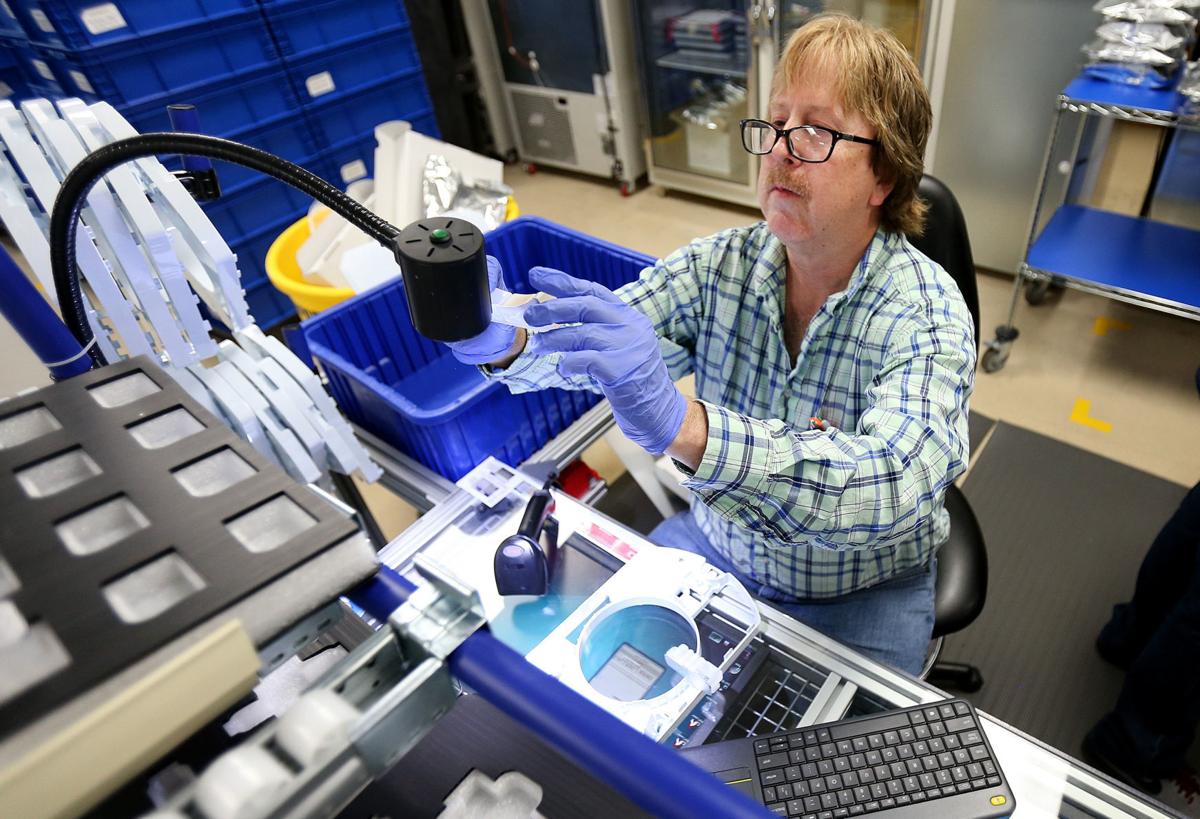 Lenny Dietsch checks test-kit components prior to assembly at Accelerate Diagnostics, which was one of two public companies into Tucson that received a PPP loan.

At least eight Arizona-based public companies, including two based in Tucson, have won loans through the federal Paycheck Protection Program, according to documents filed with regulators.

Thanks to new restrictions, money from a $310 billion cash infusion from Congress to fund a second round of PPP loans appears to be flowing to smaller businesses.

But larger companies are still tapping the loans, which are limited to companies with 500 or fewer employees and forgivable if the proceeds are used to keep workers on the payroll for an eight-week period.

According to filings with the U.S. Securities and Exchange Commission, Tucson-based medical instrument startup Accelerate Diagnostics got a $4.8 million PPP loan through National Bank of Arizona on April 14.

AudioEye Inc., a Tucson-based internet audio startup co-founded by a University of Arizona alumnus that went public in 2013, reported getting a $1.3 million PPP loan.

AudioEye, which offers a system that provides options such as audio content reading for sight-impaired users, had 84 full-time employees at the end of March, according to SEC filings.

Officials of Accelerate Diagnostics and AudioEye, which as public companies are restricted on what they can say publicly, did not respond to requests for comment about their loans.

During a conference call with Wall Street analysts on Thursday, Accelerate CEO Jack Phillips said the company’s sales efforts have been hampered as hospitals turned most of their attention to treating COVID-19 patients and restricted hospital access.

The company recently inked an agreement with San Francisco-based BioCheck Inc. to distribute BioCheck’s instrument and tests for COVID-19 antibodies, which signal that a person has had the disease.

The company is in the process of applying for emergency use authorization of the antibody test from the U.S. Food and Drug Administration.

In its filing with the SEC, AudioEye said it would use its PPP loan “to retain employees, maintain payroll and make lease, mortgage interest and utility payments.”

Both Accelerate and AudioEye have been losing money as they continue to refine their technologies and build up their sales forces.

Accelerate, which leases a building at Banner-University Medical Center South from Pima County, posted a net loss of $84 million in 2019. Net sales of its Pheno diagnostic instrument and related items rose 63% from 2018 to $9.3 million.

SECOND ROUND OF LOANS

The PPP loan program, part of the larger Coronavirus Aid, Relief, and Economic Security (CARES) Act, was launched by the U.S. Small Business Administration on April 3 but the initial $349 million in funding ran out in two weeks.

Loans of up to the maximum $10 million went to large public companies, including national restaurant chains like the Ruth’s Chris Steakhouse chain and Shake Shack, which took advantage of a loophole allowing single locations with 500 or fewer employees to qualify.

Amid a public outcry and the urging of the SBA, Shake Shack and other big companies have returned their PPP loans, and the SBA and the Treasury Department said recently they would review all PPP loans of more than $2 million.

The SBA began loaning out an additional $310 billion in a second round of PPP funding on April 27, including $60 billion earmarked for smaller banks that tend to serve the smallest businesses.

The SBA also has required businesses to certify that they are at risk of going under because of the pandemic and that they don’t have access to other capital.

Though the SBA generally makes data on its loan recipients public, the agency has not released the PPP data and there is no current timetable for doing so, said SBA spokeswoman Carol Chastang.

Public companies are required to disclose their loans in filings with the SEC, but some that have gotten PPP loans may not have yet reported them.

More money from the second round of the PPP loans is starting to flow to Arizona businesses since the application process was reopened on April 27.

The SBA reported that in Arizona, 43,915 loans totaling $3.7 billion had been approved in the second PPP funding round as of May 1, after businesses in the state got 19,280 loans totaling $4.8 billion in the first round.

Nationally, about $176 billion of the second-round PPP loan funds were approved as of May 1, with an average loan amount of $79,000.

That average loan is down from $206,000 in the first round of funding, and the percentage of loans greater than $2 million dropped to about 16% from nearly 28% in the first round, suggesting fewer large businesses are getting the loans.

While private businesses aren’t required to report their loans, business leaders say loans are starting to flow to smaller businesses.

Michael Guymon, vice president of community and government affairs for the Tucson Metropolitan Chamber of Commerce, said there’s nothing wrong with larger employers getting PPP loan money as long as they qualify under the rules, but the Chamber hopes the new rules will give smaller companies a better chance.

“We were pleased to see Congress recognized the fact that they needed to modify the language in the second round, so it clearly went to what the federal government considers a small business,” Guymon said.

Based on surveys of Chamber members, about 30% to 40% of those who applied for PPP loans had been approved as of last week, Guymon said.

Nationally as of last week, more than half of members surveyed by the National Federation of Independent Business have received PPP loans they applied for, while about 45% of those still waiting have been approved but not yet funded, said Chad Heinrich, the NFIB’s Arizona state director.

Heinrich said those percentages are likely to be roughly similar in Arizona.

While some public companies may be deserving of PPP loans, they can typically tap other financing options, Heinrich said, adding that he was pleased some loan money is being dedicated to smaller banks and their small-business customers.

“The program’s intent was to provide help to those small businesses that did not have access to other capital,” he said.

Flores confirmed that the group’s restaurants got about half of the individual PPP loans they applied for through several local banks, noting that they applied individually because they all have different ownership structures and banking relationships.

He declined to disclose the value of the loans.

“We’re trying to work within the structures of the PPP loan, but they keep changing,” said Flores, noting that the SBA released new guidance on loan forgiveness just last Monday.

Flores Concepts has laid off about 400 of its 450 employees across all of its locations, while the others have been preparing take-out orders at six locations, he said.

The remaining employees also have been feeding firefighters across Tucson and making tamales for the company’s “Tamales for Heroes” program that allows people to sponsor tamales for hospital staffers.

Gov. Doug Ducey said last week that restaurants in Arizona can start reopening for dine-in service, with precautions, on Monday.

Flores said he’s looking forward to reopening and recalling the workers but plans to reopen gradually, as each eatery runs through an exhaustive, 100-point COVID-19 safety checklist for service and sanitation.

“Every one of us (small businesses) is different,” Flores said. “For us, we’ve been at the mercy of trying to figure when the government will work with us to reopen.”

The PPP loan money is starting to trickle down to the smallest of businesses — those owned by sole proprietors.

Bobbie Butler, a local sole-proprietor accountant since 1979, shared her difficulty in getting a PPP loan in the first round with the Star recently.

Last week, after reapplying, Butler got a $2,835 PPP loan through Old Pueblo Credit union that she hopes will carry her through until the pandemic eases.

But that’s unclear as half of her clients are in Nogales, where businesses are suffering from the COVID-19 border restrictions, Butler said, adding that one of her clients recently was approved for a second-round PPP grant and six others have reapplied.

Besides Tucson-based Accelerate Diagnostics and AudioEye, other Arizona-based public companies that have reported to the SEC they have received PPP loans through last week:

Most Tucson area bike shops are open as "essential services."

Apartments tend to be more stable than office or retail properties during economic downturns.

TEP home customers will get $13 off their bills and electric and gas customers of sister utility UniSource will also credits to help them amid the pandemic.

Report: Tucson among top 10 US cities best-positioned to thrive after pandemic

Report anticipates Tucson will draw in skilled workers fleeing highly-populated areas post-COVID-19, and the firms that would be expected to follow.

The company's FreeStar5G antenna has greater range and flexibility than any 5G antenna system currently on the market.

Raytheon to move Albuquerque operations to Tucson, other US sites

Raytheon’s Albuquerque division has worked to develop modern laser and microwave weapons. That work will be transferred to Raytheon Missiles and Defense headquarters in Tucson.

The device, based on an invention by University of Arizona optical scientists, can be rapidly “trained” to detect any pathogen, from the common flu to future, as yet unknown threats.

Tucson-based Pyx Health is an online platform that recognizes when a patient has urgent needs. It will offer access to resources such as food, transportation and a nurse hotline, backed up with human contact via Pyx staffers in the company’s “compassionate call center.”

Monyka Salazar, a research associate, examines fluid extracted from a patient’s lung for testing in the lab at Accelerate Diagnostics, which received a $4.8 million PPP loan.

Lenny Dietsch checks test-kit components prior to assembly at Accelerate Diagnostics, which was one of two public companies into Tucson that received a PPP loan.