Arizona cotton, pecan growers casualties of trade war with China
Share this
1 of 3

“China has all the manufacturing, so we’re kind of at their mercy as far as them wanting to buy our crops,” says Marana cotton farmer Daniel Pacheco of Pacheco Farm Management. Pictured is a cotton field his team manages near Tangerine Road and Interstate 10. 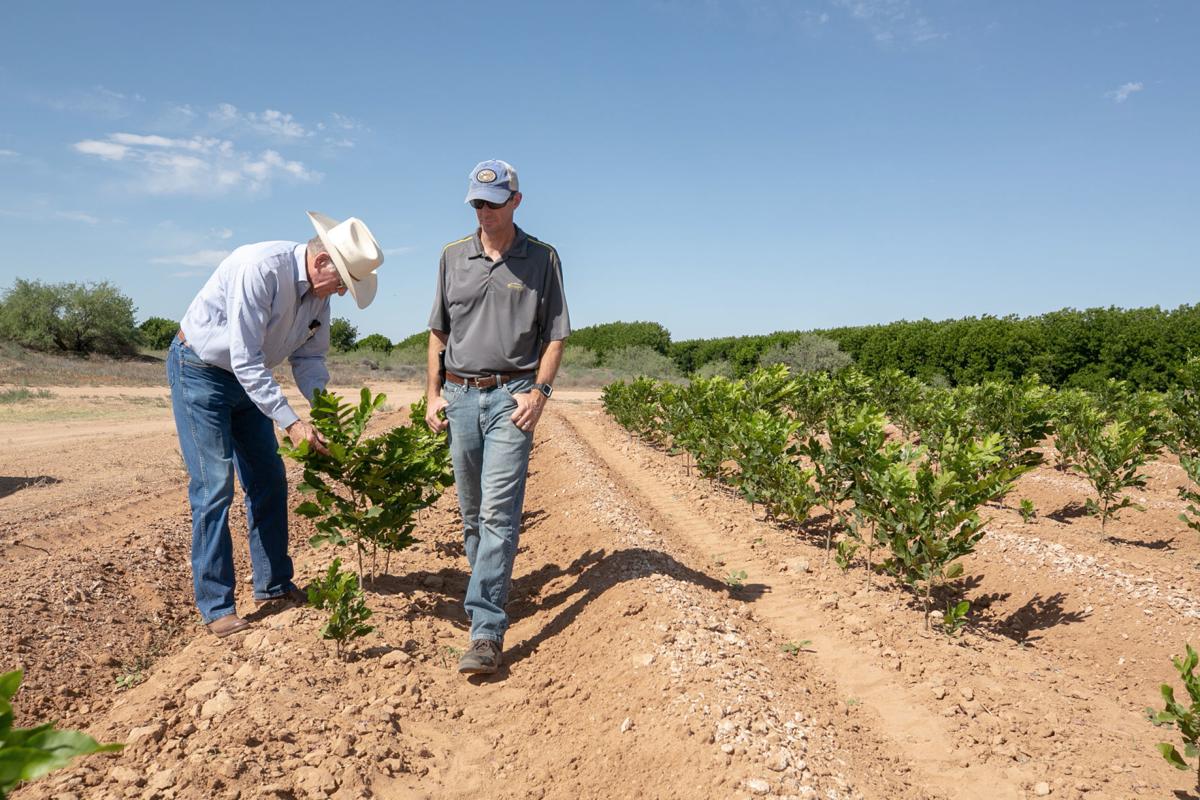 Dick Walden, left, and son Rich Walden inspect 2-year-old pecan trees in their Sahuarita nursery. Farmers are getting just under $2 a pound for their pecans, down from about $3 a pound last year. 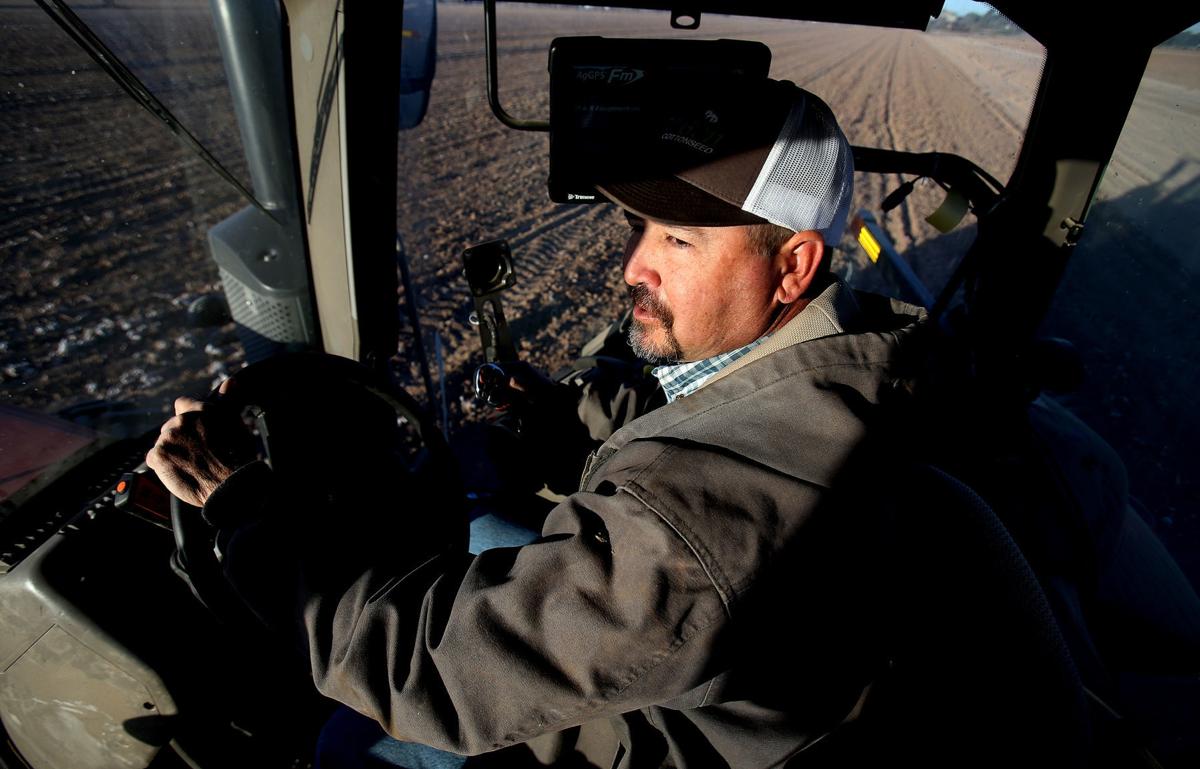 Marana cotton farmer Daniel Pacheco, piloting a tractor near Tangerine and I-10: “Something needs to be done so China doesn’t have total control over the markets that we have.”

Some Arizona farmers are facing tough times as the Trump administration’s trade war with China continues with no end in sight.

Farmers across the nation are coping with the loss of sales to Chinese markets and sagging commodity prices as China has retaliated for Trump tariffs with steep duties of its own.

While soybean farmers in the Midwest have faced the biggest losses, in Arizona cotton and pecan farmers are among the most hard-hit by the trade war.

Cotton prices began falling last June from about 95 cents per pound to less than 60 cents recently.

While some other factors are at play — including strong prices that prompted farmers to plant more cotton in recent years — the tariff fight has been blamed for much of the downward price momentum.

President Trump and supporters of his trade policy say the tariffs are needed to fight what they say are unfair trade practices by China, which protects its markets and manages trade through a system of subsidies and tariffs.

But in response to tariffs on billions of dollars of Chinese goods imposed by the Trump administration, China in June 2018 slapped retaliatory tariffs of 25% on U.S.-produced cotton and other goods. China has since raised other tariffs, including new duties on soybeans, coffee and oil announced Friday.

Now, not only are U.S. cotton farmers losing market share in China to producers in countries like Brazil, but the tariffs also have the effect of stunting overall demand and prices.

About 70% of the U.S. cotton crop is exported and historically, 20% of that has gone to China.

With the cotton harvest looming about a month or so away, Marana cotton farmer Daniel Pacheco said the recent price of cotton at 59 cents per pound is about his break-even price, leaving no room for a profit, mainly because of the tariffs.

The longtime farming business started in 1980 by his father and uncle, Pacheco Farm Management, has about 1,000 acres planted in upland cotton for lint and cottonseed.

“We’re just hoping the market’s going to turn and we can come to some sort of agreement with these tariffs,” said Pacheco, farm manager for the family business. “That’s the only thing holding the price down right now. China has all the manufacturing, so we’re kind of at their mercy as far as them wanting to buy our crops.”

The farm has already cut its costs to the bone, Pacheco said.

Kevin Rogers, a Scottsdale farmer and executive vice president of the Arizona Cotton Growers Association, said the price of cotton was weighed down by supply and other factors before Trump’s trade war with China erupted.

But with the tariffs pushing prices down to levels not seen since 2009, many Arizona cotton farmers are feeling the financial pressure, Rogers said.

“China is one of our main buyers when they are able, and they really like U.S. cotton,” he said. “It’s hurting them, but it’s hurting us in the pocketbook.”

Arizona pecan farmers also have been hit with the retaliatory tariffs — after expanding their groves in recent years to fulfill growing demand for the nuts in China.

Bruce Caris, chief operating officer for Sahuarita-based Farmers Investment Co. or FICO, said pecan farmers are getting just under $2 a pound for their pecans, down from about $3 a pound last year before the Chinese tariffs took hold.

China had significantly increased its imports of U.S. pecans in recent years to 100 million pounds, but exports have dropped to just 9 million pounds so far this year, Caris said.

FICO exports about 60% of its pecan crop to nations including China.

“We’ll get some of that business back,” Caris said. “We’ve been hit in the nose with a two-by-four and we’re just trying to get through it.”

Amid the plummeting prices, FICO has managed to avoid layoffs, Caris said, but the parent of Green Valley Pecans recently decided to cancel this year’s Sahuarita Pecan Festival in its 11th year.

Pecan producers are looking at new foreign markets, including the European Union, the United Kingdom, India, Turkey and the Middle East to fill the demand void left by China, Caris said.

“As a company, we feel that government interference in free trade is not a good thing,” he added.

While cotton farmers and other agricultural producers are struggling with market losses and depressed prices because of the trade war, the costs of the tariffs are ultimately passed along to consumers.

Taxpayers also are picking up the tab for nearly $30 billion in subsidies to farmers to compensate them for retaliatory tariffs imposed by China and other countries.

George Frisvold, a professor in the University of Arizona’s College of Agriculture, said in theory, some of the tariff costs will be absorbed by importers.

“But most of the studies I’ve seen so far is that almost all of the cost of the tariffs is being pushed on U.S. consumers,” said Frisvold, who in the mid-1990s served on the senior staff of the President’s Council of Economic Advisers with responsibility for agricultural, natural resource and international trade issues.

Last week, the financial firm JPMorgan estimated that the current U.S. tariffs will cost the average American family $600 a year, and that figure will rise to $1,000 per family if new tariffs go into effect as planned in September and December.

Frisvold said U.S. agricultural producers will replace some of their exports to China with sales to other nations, an effect known as “trade diversion.”

U.S. farmers affected by retaliatory tariffs have gotten some relief from special “market facilitation” payments to offset their losses.

The Trump administration approved $12 billion in such aid last year and this year has added $16 billion for the current market year, which varies by crops.

A recent analysis by The Associated Press showed that from last year’s $12 billion in aid, 440 farmers or farm businesses in Arizona received payments totaling about $16 million.

Pacheco Farm Management received a payment of $51,428 under a price-based system, but that doesn’t make up for the farm’s losses, Dan Pacheco said.

“They don’t cover what’s lost, that’s for sure, they’re kind of a band-aid,” he said. “It looks bad to the public that we’re being paid so much, but really when you’re relying on other countries for food and fiber, then you basically add a huge national security risk.”

“We would rather have our markets than supports, without a doubt,” he said.

Rogers said most farmers support the over-arching goal of forcing China to reform its trade policies but feel like “pawns on the table,” adding that he believes cotton prices will recover if a trade deal is reached.

“At 100,000 feet, we understand China hasn’t been playing fair,” he said, noting that Trump still enjoys strong support in rural communities. “We get that, but now it’s getting pretty critical.”

“It hurts us — in fact, it may kill us — but in the long run something needs to be done so China doesn’t have total control over the markets that we have.”

The Pecan Classic race scheduled for Nov. 9 will still be held.

Fourth-generation farmer is unwilling to take the risk of hiring undocumented workers.

Ohio-based subsidiary of Marathon Petroleum is converting 29 local stores to its Speedway brand.

“China has all the manufacturing, so we’re kind of at their mercy as far as them wanting to buy our crops,” says Marana cotton farmer Daniel Pacheco of Pacheco Farm Management. Pictured is a cotton field his team manages near Tangerine Road and Interstate 10.

Dick Walden, left, and son Rich Walden inspect 2-year-old pecan trees in their Sahuarita nursery. Farmers are getting just under $2 a pound for their pecans, down from about $3 a pound last year.

Marana cotton farmer Daniel Pacheco, piloting a tractor near Tangerine and I-10: “Something needs to be done so China doesn’t have total control over the markets that we have.”