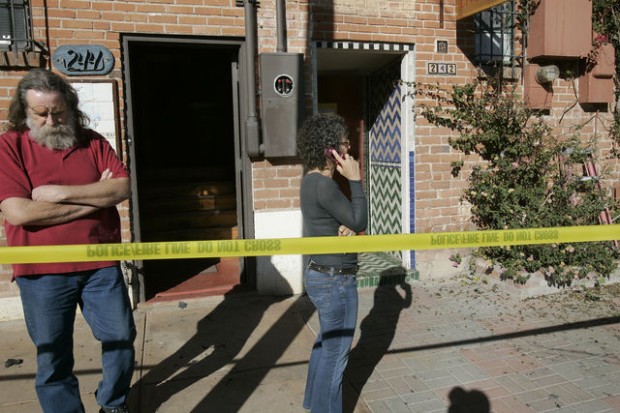 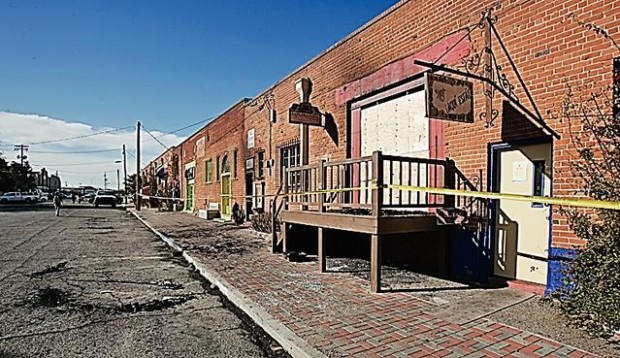 The blaze that tore through the Lost Barrio district Tuesday night may have caused up to $1.25 million in damage as it not only ripped apart the warehouse's roof but also consumed a number of rare and valuable items, Tucson Fire Department officials said.

Although the cause of the fire remains unknown, it's believed to have started in the back workshop of Explorations in Design, one of a handful of high-end furniture and import stores in the row of brick warehouse space starting along the 200 block of South Park Avenue.

Wednesday morning, though, the smoke had cleared, and police tape was wrapped around the warehouse district. A number of the shop owners milled about outside their stores, speaking with insurance reps and reporters while waiting to be let back into their stores to get a full look at the damage.

"I think it started in my workshop," said Robert Gibson, owner of Explorations in Design.

Gibson opened Explorations 12 years ago, and his shop featured handmade work ranging from Islamic art and rugs to tiled Moroccan tables, teak armoires and doors. He described a large part of his inventory as "treasures" that were probably too high-end for the Tucson market, so he balanced his inventory with more traditional imports to keep things going.

"This was a lifetime of collecting," he said. "It's stuff that can't be replaced."

Although he has fire insurance, Gibson said the fire might have put his business under. Not only is he facing a stretch of time without any business, but he also has to buy new inventory.

"In the best of times, it would be tough to reopen," he said.

The Lost Barrio's warehouse space was built in the early 1940s and originally was used to ship produce. There was a time when the University of Arizona stored Spring Fling equipment there, said Paul Buck, who opened a store there in the late '80s.

"It was the cheapest storage space in town," Buck said. "We called it the Lost Barrio because back then the only people who ever found us were lost."

Now the strip has become a well-known gem for unique shops and high-end imports. It has a hip urban feel that fits well in the slow-paced barrio tucked away just south of Broadway between Aviation Parkway and the Arroyo Chico.

But like most in the furniture business, the shops in the Lost Barrio have been hit hard by the recession, and the fire is just one more problem to deal with in tough times. Even for those shops spared fire damage, there was still the question of smoke damage to the furniture.

"My business has dropped off about 40 percent," said Michael Bernstein, owner of Colonial Frontiers, which was spared from the fire.

He said he was waiting to see how much smoke damage, if any, his inventory suffered. Mostly, though, he was just hoping to get back in his shop, pronto.

"I plan on reopening for business as soon as possible," Bernstein said.

Social Security & You: Seniors Who Are Disabled

Baby boomers (like me) aren't just getting old. Some of us are also getting frail. I'm probably a pretty good example. After a lifetime of ess…

Leonardo says it has outgrown the former Lasertel plant in Marana and plans to build a new facility in Oro Valley that will add 170 jobs to its local payroll.

6 steps to higher net worth: A year-end financial checklist

Here are six easy-to-implement steps to help boost your net worth going into the new year. Plus, check out more personal finance tips from experts.

Despite surging home prices, Tucson ranks among the most affordable places to own a home in the West, University of Arizona economists say.