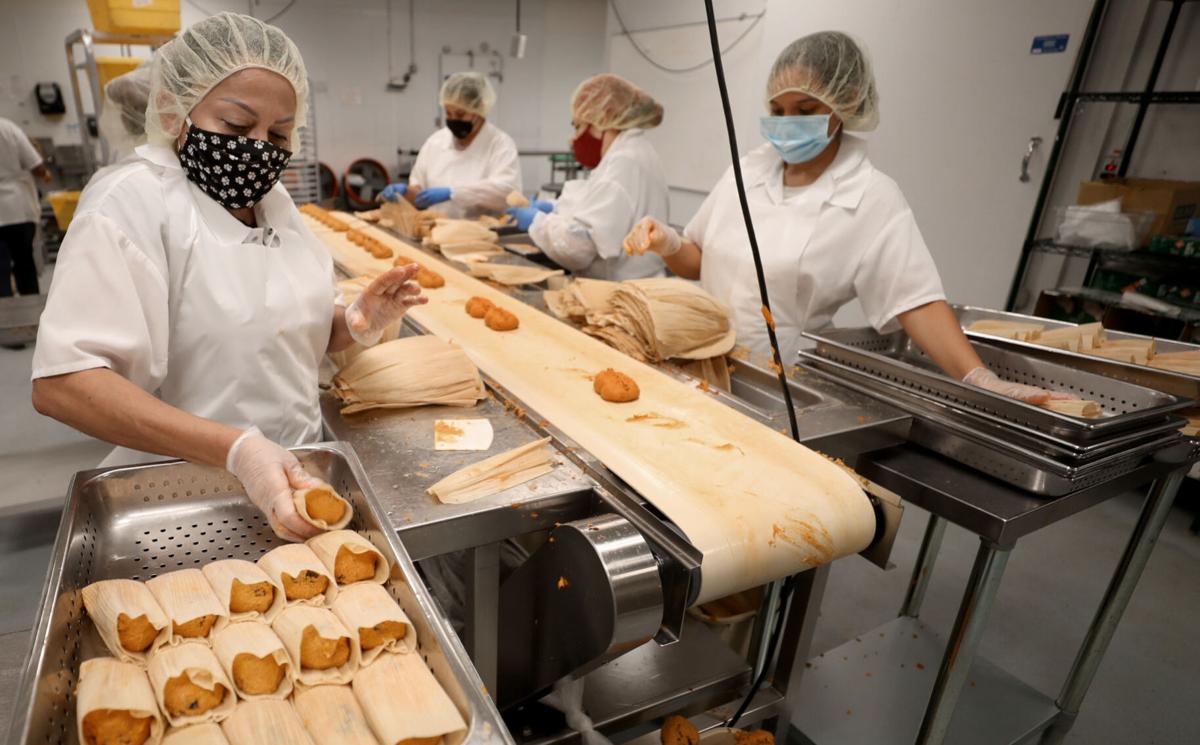 Maria Miranda Felix, left, rolls black bean tamales off a conveyor in the kitchen of Tucson Tamale Co. in September. The company employs more than 40 full-time workers and has grown to have a national presence. 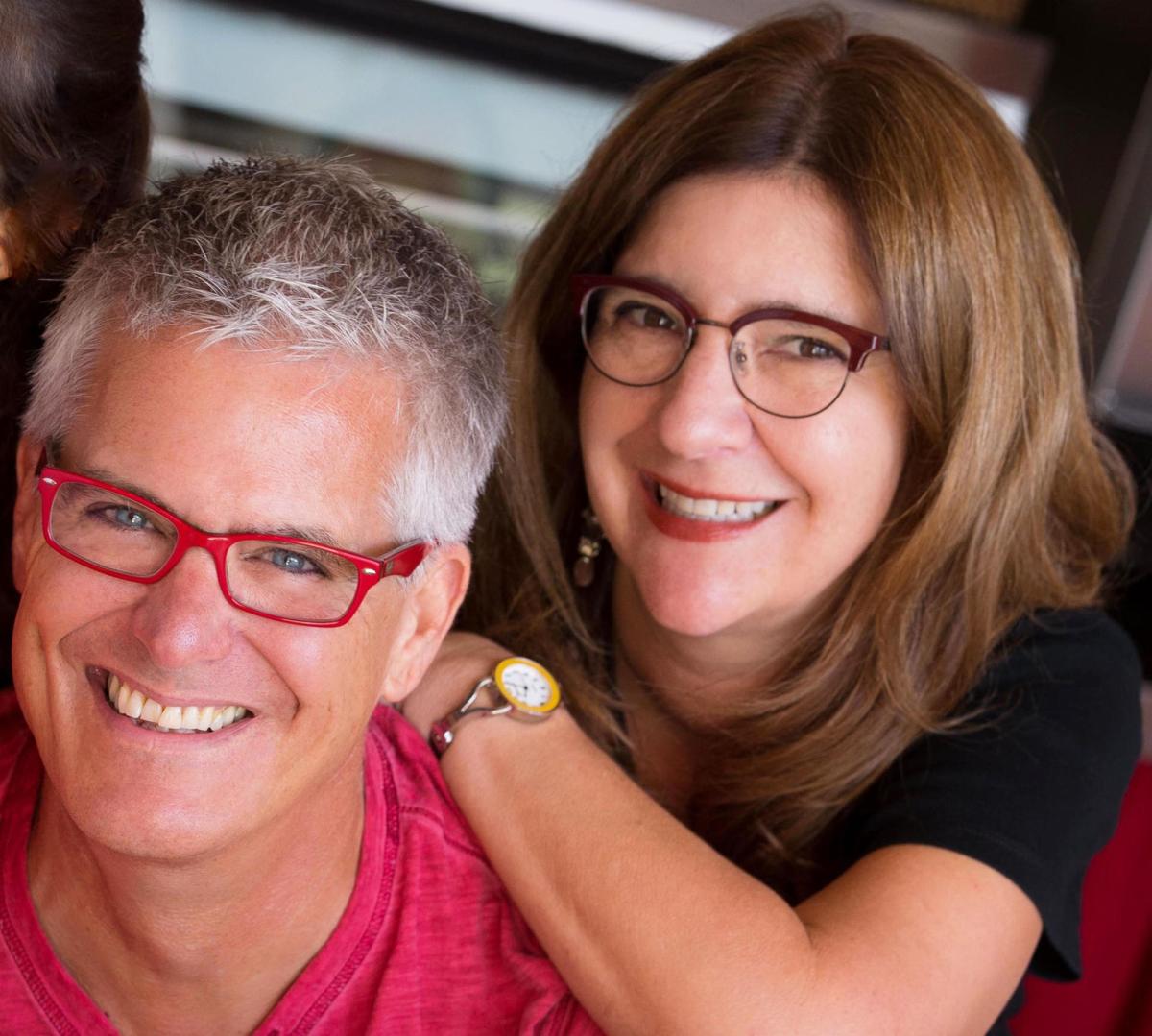 Sherry and Todd Martin are the founders of Tucson Tamale. They officially started the business about 12 years ago. Unofficially, the business started a few decades earlier in Sherry’s great-grandmother’s family kitchen in Mexico.

The making of tamales is a tradition in Mexican culture — a time for family and friends to get together, have some fun, and make some great food. Each family has its own traditions and flavors. Sherry’s family was no different.

Sherry’s family came to Tucson when she was 5 years old. Sherry graduated from the University of Arizona, met Todd Martin in 1995, and Todd joined the tamale-making parties.

As with most businesses, Tucson Tamale was born out of a passion for the product, and an opportunity in the market. Sherry and Todd Martin left corporate America in 2008 to begin sharing their tamales with Tucsonans. As they described it, they moved from the family kitchen to a small storefront on Broadway.

Their timing couldn’t have been worse. Remember the recession that began in 2008? Well, Tucson Tamale began at the same time as the recession. The terrible economy, however, had a couple of silver linings.

First, they were forced to shift strategies from takeout on Broadway to consumer products. Open to every opportunity, they answered a call for local product placement at Whole Foods, Sunflower (which would be bought by Sprouts) and the Food Co-op. They worked to get Tucson Tamales into 35 outlets around the city by the end of 2009.

Second, their change of direction and growth in the middle of a recession was a good story to tell. They got some positive exposure in the media. It helped them increase awareness among the public, increase sales at the retail level and increase their number of retail partners.

Despite how rough the recession was, one mistake the Martins never made was to compromise on their product. “We never put out a crappy product,” Todd Martin said.

The Tucson Tamale product is made with quality ingredients. All of the corn they use is 100% organic and non-GMO. All of the pork and chicken is antibiotic- and hormone-free.

Remember the Food Co-Op as one of the Martins’ original distribution outlets? Their tamales sold very well at the Co-Op and the buyer took notice. That buyer eventually moved to a national natural food distributor and the Martins and the buyer remained in touch. When Tucson Tamale was ready to go national, they had guidance and support from the buyer.

Today, Tucson Tamale has a presence in 74% of all natural food stores and is gaining a presence in national chains such as Kroger and Safeway. It has gone from 35 retail stores in Tucson in 2009 to over 3,500 stores nationally today.

Remember the small storefront and kitchen on Broadway? They now have two retail locations in Tucson and their own manufacturing facility at Interstate 10 and Grant Road. They employ over 40 full-time employees, and numerous contract employees like a national sales team and brokers.

History repeated itself economically in 2020 with the pandemic. Curiously, the Martins strategic shift in 2008 to consumer packaged goods enabled them to weather the economic collapse of 2020.

There were some rough months from February through April. Since then, business has prospered. Online orders are way up. In 2020, their e-commerce business shipped over 750,000 tamales. In total, Tucson Tamale made over 4 million tamales in 2020.

Going forward, the Martins want to double the size of the company. They have new products in the development pipeline and are rapidly accelerating their e-commerce business.

One other thing to know about Tucson Tamale and Sherry and Todd Martin is their love of Tucson. The naming of the business was a conscious decision on their part.

The Martins are proud to be part of Tucson’s business community. Their family and the families of their 40 employees are proud to live in Tucson.

“We are Tucson ambassadors, and we want our name Tucson Tamale to reflect that,” Sherry Martin said.

Ken Cook is the co-founder of How to Who, a program on how to build strong business relationships. Learn more at howtowho.com.

Startup Tucson alumni have created over 300 new jobs, and raised over $34 million in invested capital.

Building Tucson Businesses: Back from the brink, Commerce Bank steps up

In the midst of the COVID-19 pandemic, Tucson businesses turned to Commerce Bank of Arizona for assistance with federal loans, Ken Cook writes.

Building Tucson Businesses: For this auto shop, culture, community are the foundation

Local United Way and Catholic Community Services, AARP will offer options for  online help and in-person sites with curbside and other service options to limit the spread of the virus.

Loans are available for a variety of functions including start-up funding, starting a franchise, buying equipment, inventory, real estate and more.

The story behind Ten55 Brewing and its pandemic pivot

When the COVID-19 pandemic hit, co-owner Chris Squires' Marine Corps' experience kicked in. His mission: to protect his team and business.

Believing in the power of private enterprise, Rio Nuevo works to leverage its assets to grow the economy and the community, Ken Cook writes.

The ripple effect of small businesses on the Tucson economy

When the unexpected occurs, small businesses like insurance agencies enlist other industries to make things right for clients.

Maria Miranda Felix, left, rolls black bean tamales off a conveyor in the kitchen of Tucson Tamale Co. in September. The company employs more than 40 full-time workers and has grown to have a national presence.