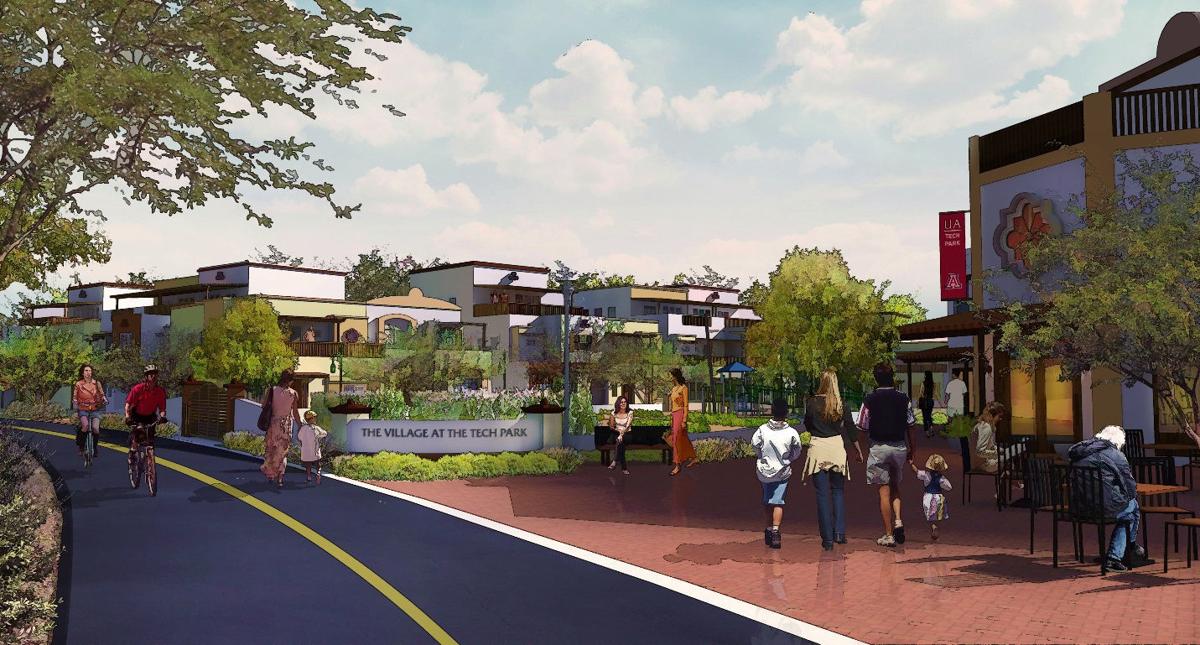 An artist’s rendering of The Village, a 175-acre development with residential, retail, commercial and hotel uses planned at the UA Tech Park on South Rita Road. 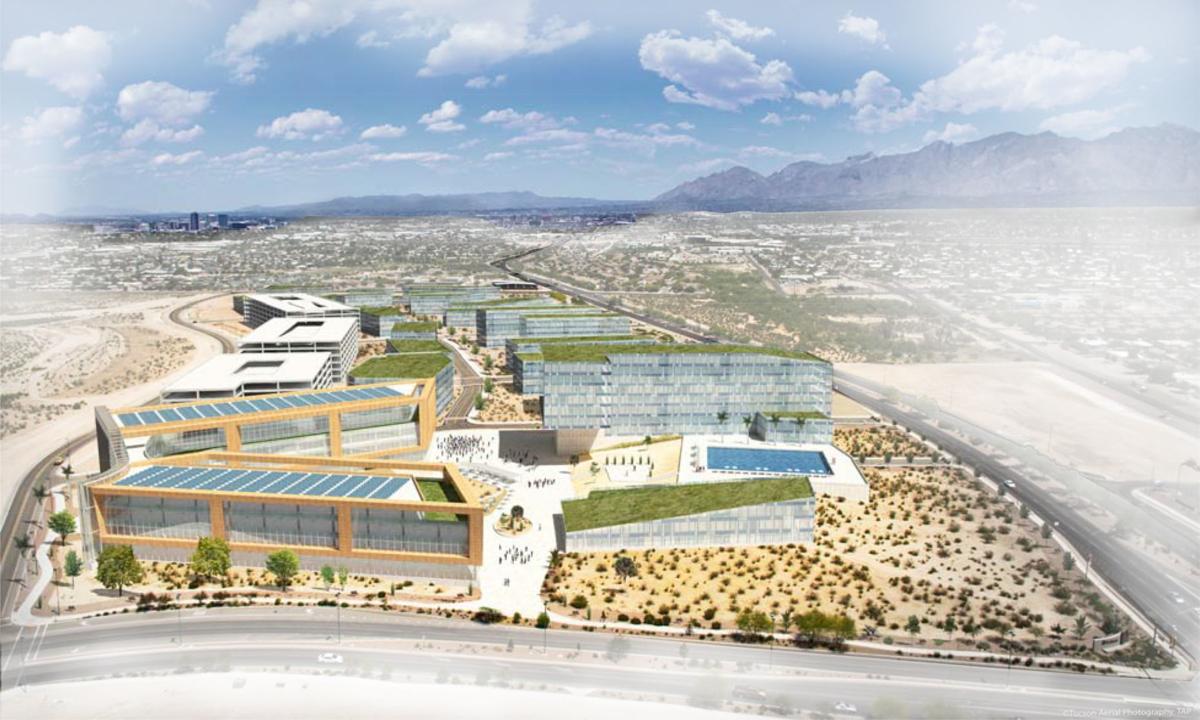 An aerial rendering of the proposed Technology Precinct at the UA Tech Park at The Bridges, which would occupy about 65 acres at the southwest corner of South Kino Parkway and East 36th Street.

Office buildings will finally start going up at the UA Tech Park at the Bridges on Tucson’s south side, and planning is underway for a mixed-use “urban village” development for the Tech Park on Rita Road, according to plans unveiled by the University of Arizona Thursday.

Tech Parks Arizona announced Thursday that it has picked The Boyer Co., a Salt Lake City company, as a development partner to design and develop a new “Technology Precinct” at The Bridges, at South Kino Parkway and East 36th Street.

The first development in the Technology Precinct is expected to be the Innovation and Technology Complex, initially anchored by a four-story office building that will house the UA’s technology-commercialization operation, Tech Launch Arizona, as soon as early next year.

Tech Parks Arizona also selected Tucson-based Bourn Cos. as master developer of The Village, a 175-acre proposed development at the Tech Park on Rita Road including commercial, residential and hotel components.

Expansion at the UA Tech Park, including a hotel and conference center, has been part of the UA’s long-range plan for the park for years.

Bruce Wright, UA assistant vice president of Tech Parks Arizona, said the timing for new development there is right, with the park at nearly full occupancy and the local economy picking up.

“The economy in Tucson has taken off, and Tech Park here on Rita Road has seen some significant growth,” said Wright, citing a current vacancy rate of just 2.5 percent.

The planned new development will help tenants attract a younger workforce of millennials — generally considered those who reached adulthood in the early 2000s, Wright said.

An increasing percentage of the Tech Park’s 6,000-plus employees are millennials, who according to research tend to place a high value on things like interactive public spaces and a variety of food and entertainment options, he said.

“The millennials are a really different kind of employee than baby boomers or Gen X,” Wright said. “They want their work site to be more exciting.”

New retail and food options also will help fill unmet demand in the fast-growing but “underserved” Vail area, he added.

The Tech Park also plans a series of outdoor public spaces at The Village not only for employees, but to invite the larger community, Wright said, adding that he envisions student and other community groups visiting to learn about local technology companies.

Bourn partner Don Bourn said that when the UA put out a request for proposals for a development partner for the Tech Park, he reacted, as before, by thinking, “that’s way out there.”

But upon closer consideration, Bourn saw a vibrant tech hub that has the potential to grow and attract new companies and residents, with good access just 15 minutes from downtown.

“There are very few places in Tucson that have that concentration of technology-oriented workers,” Bourn said, citing the presence of tech giants IBM and Raytheon Missile Systems.

The Village is still in the early planning stages and Bourn still must bring in other developers and investors, Bourn said.

“We’re not looking at the next five years; we’re looking at the next 25 or 30 years,” he said. “All great cities have dense nodes of activity that bring energy and excitement, and we really believe that for the southeastern part of Tucson, this can become that node, if not become the No. 1 node for research and development.”

The new plans for The Bridges are further along, as UA officials floated the idea of an initial tech building anchored by Tech Launch Arizona more than two years ago.

The site was initially focused on biotech development and called the UA Bio Park, but it was rebranded and its focus broadened after the UA couldn’t attract bio firms there in the aftermath of the Great Recession.

An earlier plan for the initial UA building had Pima County contributing $20 million of bond funding, with the UA bonding for the rest, but the failure of a related county bond proposal in 2015 sent the UA looking for a new development partner.

The Boyer Co., which worked with the UA to develop its biomedical campus in Phoenix and has an office there, has won more than $2 billion in construction and permanent financing and more than $500 million of projects in various stages of development.

“The Bridges is ideally situated to take advantage of the continued growth in Tucson,” Boyer Co. partner Matt Jensen said, adding that the company plans to be a long-term strategic partner with the UA.

“We think it’s going to really become the place for companies to want to locate, as they look at Tucson.”

Long-term plans for the Technology Precinct at The Bridges include four to five office buildings, a full-service hotel and conference center, a parking structure and 400,000 square feet of additional office and lab space.

Besides the usual wet-lab spaces, the new lab and office building will include significant areas for computing, which is becoming increasingly integrated with biomedical and other technologies, as well as both formal and informal meeting spaces to foster collaboration, Leathley said.

After an initial design phase, the first new building at The Bridges is expected to start going up by January or February, Wright said.

The timing of the construction of the hotel and other features will depend on market demand, the developers said.

Bourn is also involved in new development at The Bridges, outside of the new Technology Precinct, after acquiring 112 acres of land there formerly owned by a joint venture of KB Home and Lennar Homes, which had originally planned to build houses there.

In January, it was announced that Bourn would build a 200,000-square-foot building at the south-side tech park where insurance giant Geico plans to move its regional customer-service operation and expand by some 700 workers.

Bourn said the company has agreed to build at least 300 units of new housing, likely including both single-family homes and apartments.

The company also plans to add a new stoplight on East 36th Street at Martin Luther King Junior Way, which bisects The Bridges, and it plans to build a county park there, he said.

An Arizona Court of Appeals ruling says an Arizona law providing for stiffer sentences for use of a dangerous instrument in an attack only applies to cases in which the victim is a human, not an animal.

In a 4-3 decision, the justices overturned a 2002 voter approved law that said bail must be denied when someone is accused of certain sexual offenses.

Says decision to limit protests "typical of the NFL."

Davis-Monthan Air Force Base participated in National Police Week from May 13 – May 19, 2018.

Six people have been arrested in connection with a violent home invasion at a Tucson apartment Thursday night, Tucson police say.

An artist’s rendering of The Village, a 175-acre development with residential, retail, commercial and hotel uses planned at the UA Tech Park on South Rita Road.

An aerial rendering of the proposed Technology Precinct at the UA Tech Park at The Bridges, which would occupy about 65 acres at the southwest corner of South Kino Parkway and East 36th Street.