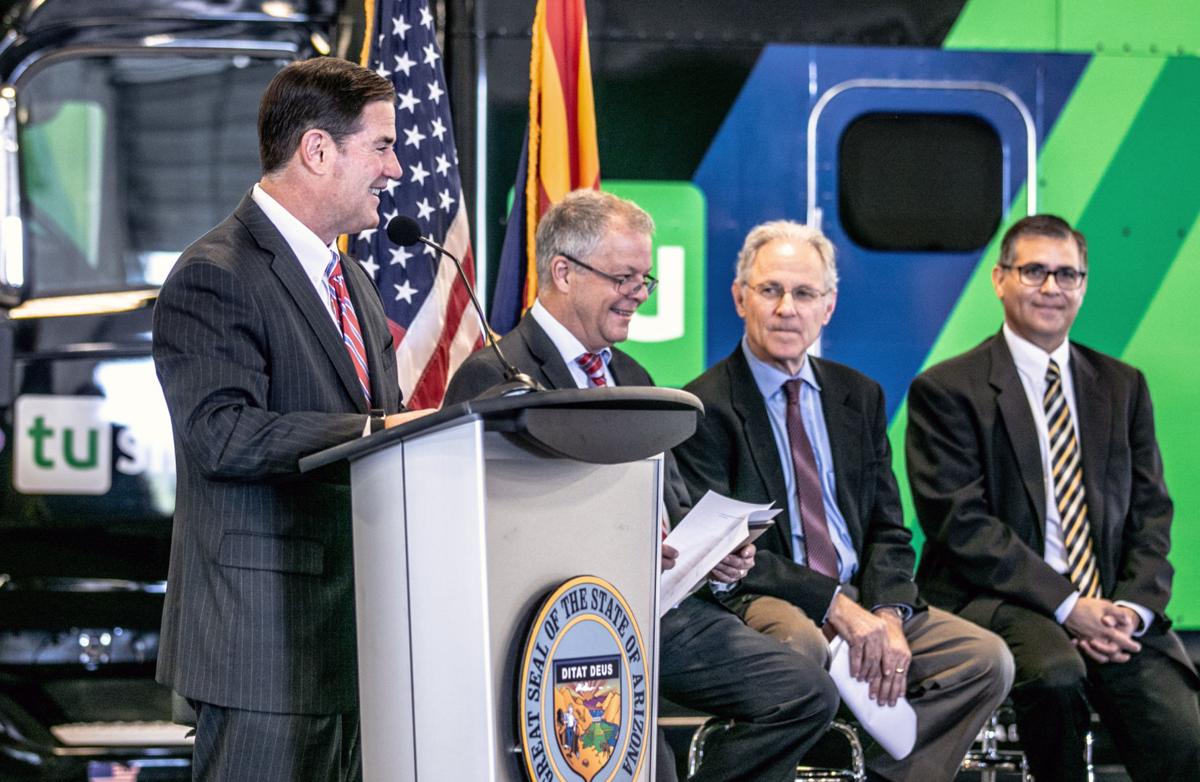 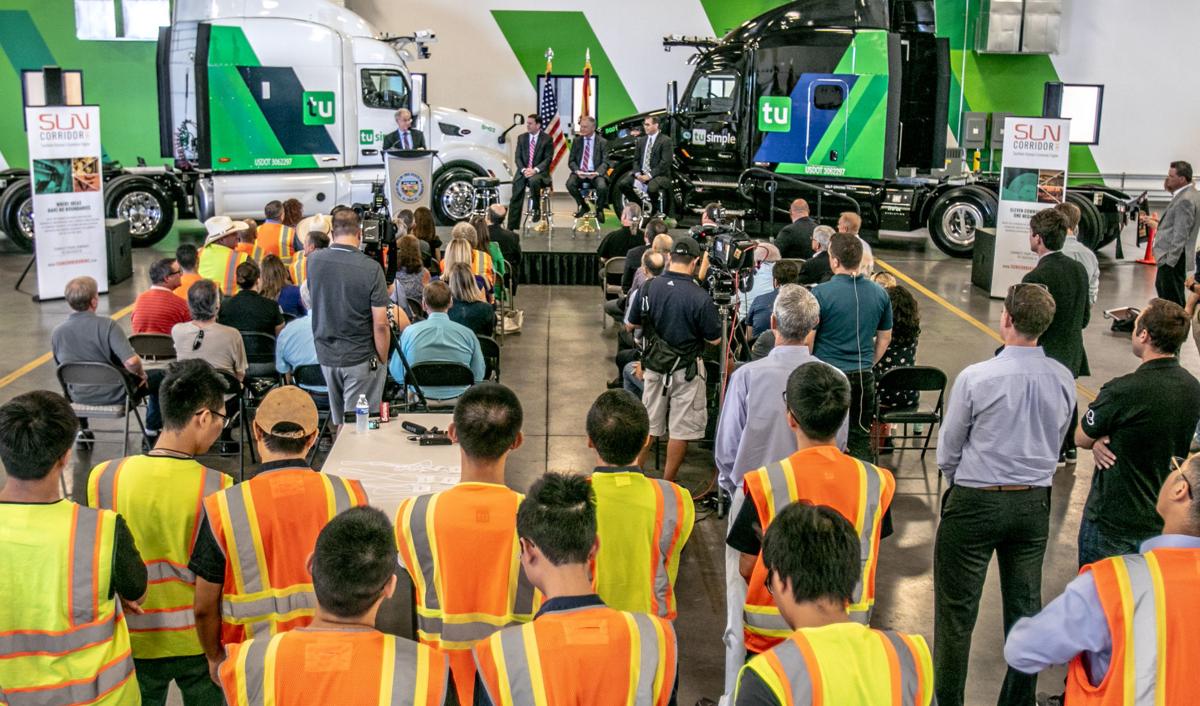 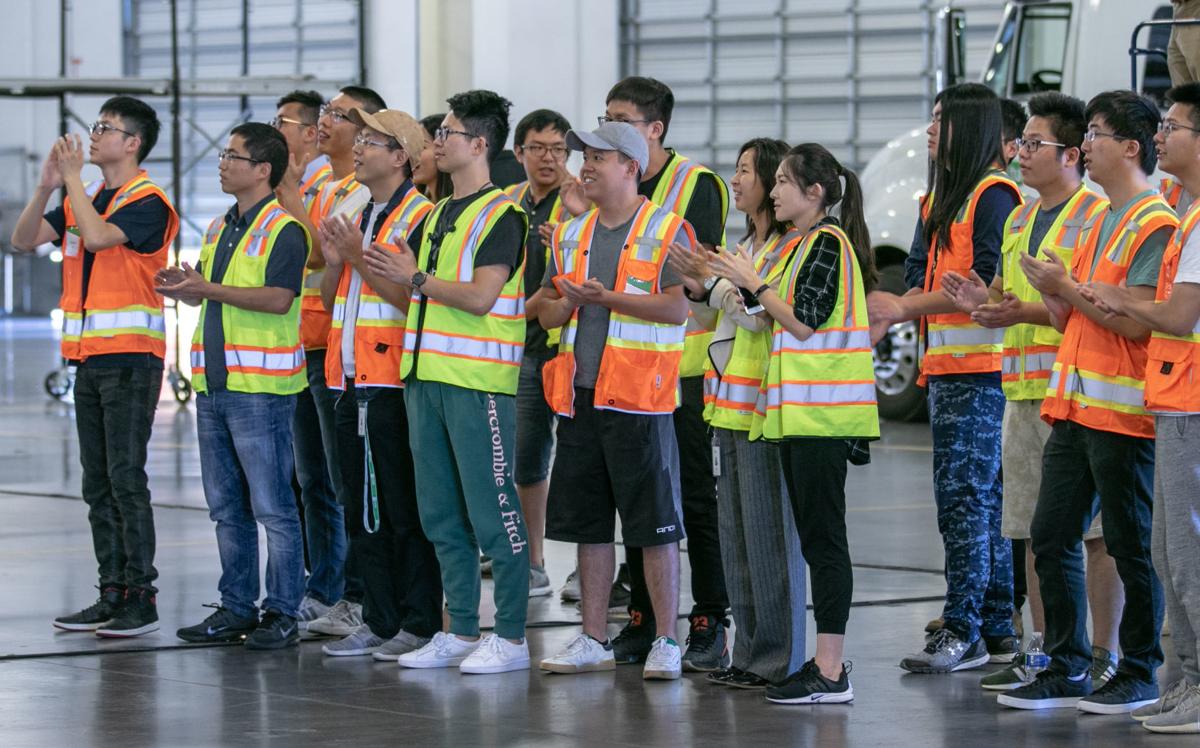 TuSimple says it will expand its Tucson workforce from 100 to 600 over the next two years.

TuSimple, a Chinese company that is developing self-driving commercial trucks in Tucson, plans to add 500 jobs here over the next two years, officials announced Wednesday.

The company, which has dual headquarters in Beijing and San Diego, opened operations here about a year ago in a small commercial space on Tucson’s west side. It moved to a large industrial building on Tucson’s southeast side earlier this year.

TuSimple has about 100 local employees — including drivers, engineers and technicians — who have been testing autonomous trucks from its new facility on East Old Vail Road on manned test runs mainly on Interstate 10 between Tucson and Phoenix.

The expansion, which will also include additional building space, will allow TuSimple to build out and staff a planned fleet of 200 Peterbilt heavy trucks, Chuck Price, a TuSimple partner and vice president, said at an event marking the expansion.

The company is already hauling freight for paying customers on its manned test runs and hopes to be able to test completely driverless trucks within two years.

“It allows us to develop a safe and effective solution that we can bring from testing to production,” Price said.

Gov. Doug Ducey has wooed operators of self-driving fleets, such as Uber and Waymo, with executive orders supporting the testing and operation of autonomous vehicles in the state.

After a self-driving Uber car struck and killed a pedestrian in Tempe, Ducey suspended the company’s test program, and in May Uber dropped its testing program in Arizona.

Ducey made prepared remarks at Wednesday’s announcement at TuSimple but was not made available for questions.

Price said that for TuSimple, “Safety is our north star, it is the most important aspect of what we’re doing.”

After the fatal Uber crash in March, TuSimple halted its testing program and conducted a full review before restarting the effort, he said.

“The Uber crash, we believe, is primarily a management issue with how they were conducting their program,” Price said. “There were safety systems that were disabled — we don’t do that. Our drivers are CDL (commercial driver’s license) professional drivers, professionally trained, highly experienced drivers.”

The company uses a combination of imaging and sensor technologies and proprietary software to allow trucks to navigate complex road scenarios autonomously, though each test truck is manned for now with a driver and an engineer.

The trucks follow routes mapped by passenger cars that create 3-D maps of the environment and are programmed to safely pull over in an emergency situation.

“The vehicles, we believe, will be far safer than a human. It will never fall asleep, and we have a perception system that is better than a human,” Price said.

TuSimple recently announced that its camera-based system has a vision range of 1,000 meters — farther, the company says, than any other perception system today. The system can “see” 360 degrees around, enabling the vehicle to locate itself within four inches of the road at all times, the company says.

Eventually, TuSimple plans to run “platoons” or “processions” of several driverless commercial trucks in a group.

Price said the company will continue to test its systems while policymakers sort out regulations allowing autonomous vehicles.

TuSimple’s planned expansion has a projected total economic impact of $1.1 billion over the next five years, according to Sun Corridor Inc., the Tucson area’s main economic-development agency.

Price declined to say how much TuSimple plans to spend on its Tucson expansion. The company has raised more than $80 million from private investors, including Chinese internet giant Sina Weibo and Nvidia, a major maker of computer graphics hardware.

The company has not applied for any state or local economic-development incentives, though it may qualify depending on the size of its investment and additional jobs.

The new jobs will span a variety of fields, ranging from engineering and autonomous truck driving to office management.

TuSimple already has built strong relationships with the University of Arizona and Pima Community College to help it find the talent it needs, Price said.

“This is the kind of unique, groundbreaking company we’re glad to have in Arizona,” Ducey said.

“For a city to be sustainable, its economy has to adapt along with the global economy,” Rothschild said. “Tucson is a city that can attract and retain the jobs of the future, like those being created here.”

TuSimple’s Price acknowledged that some people, including truck drivers, may be skeptical of the company’s efforts.

The Teamsters Union has vehemently opposed the implementation of self-driving trucks, citing safety concerns and the potential loss of thousands of jobs, though the industry is experiencing a worsening driver shortage.

“We’re following a very rigid safety program to ensure the vehicle is not released in the wild until it’s ready, and that will require millions of miles of testing,” Price said.

“That’s the reason we are building a 200-truck fleet, with real cargo, to prove that it’s safe, and we won’t pull the driver out until it is safe.”

Caterpillar partners with PCC to train engineers on hands-on skills

The park and its Arizona Center of Innovation will help inventors go after $3 million in prize money to demo new solar tech.

Programming is being refined to meet employers' needs and some course fees have been eliminated.

The program will focus on “civilianizing” job-seeking vets’ skills and training into skills employers can understand and use.

In an executive order signed Thursday, Ducey created the Institute for Automated Mobility.

TuSimple says it will expand its Tucson workforce from 100 to 600 over the next two years.