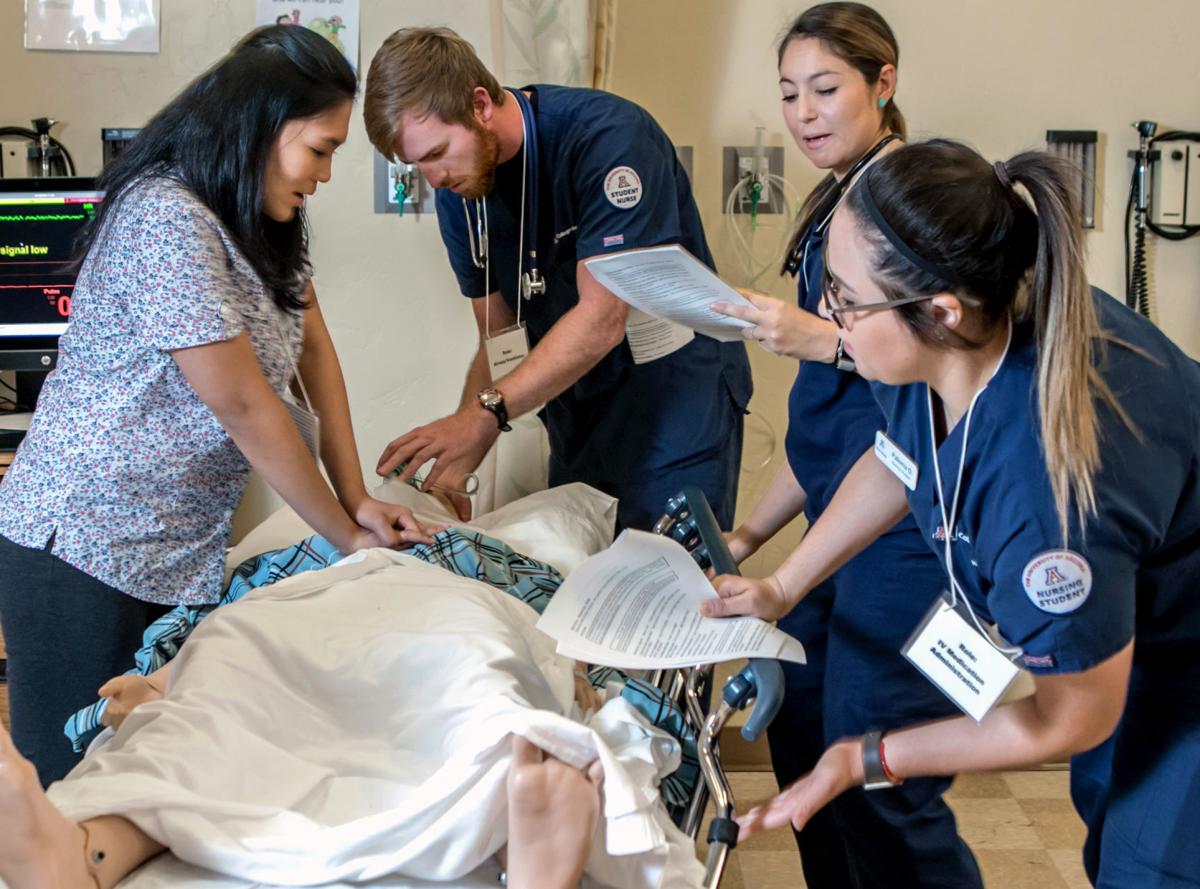 Pharmacy student Sigrid Jimenez, left, works on a computerized mannequin with nursing students Richard Douglas, Rebecca Moore and Paloma Ojeda at the University of Arizona College of Nursing. A new program is trying to improve diversity in nursing. 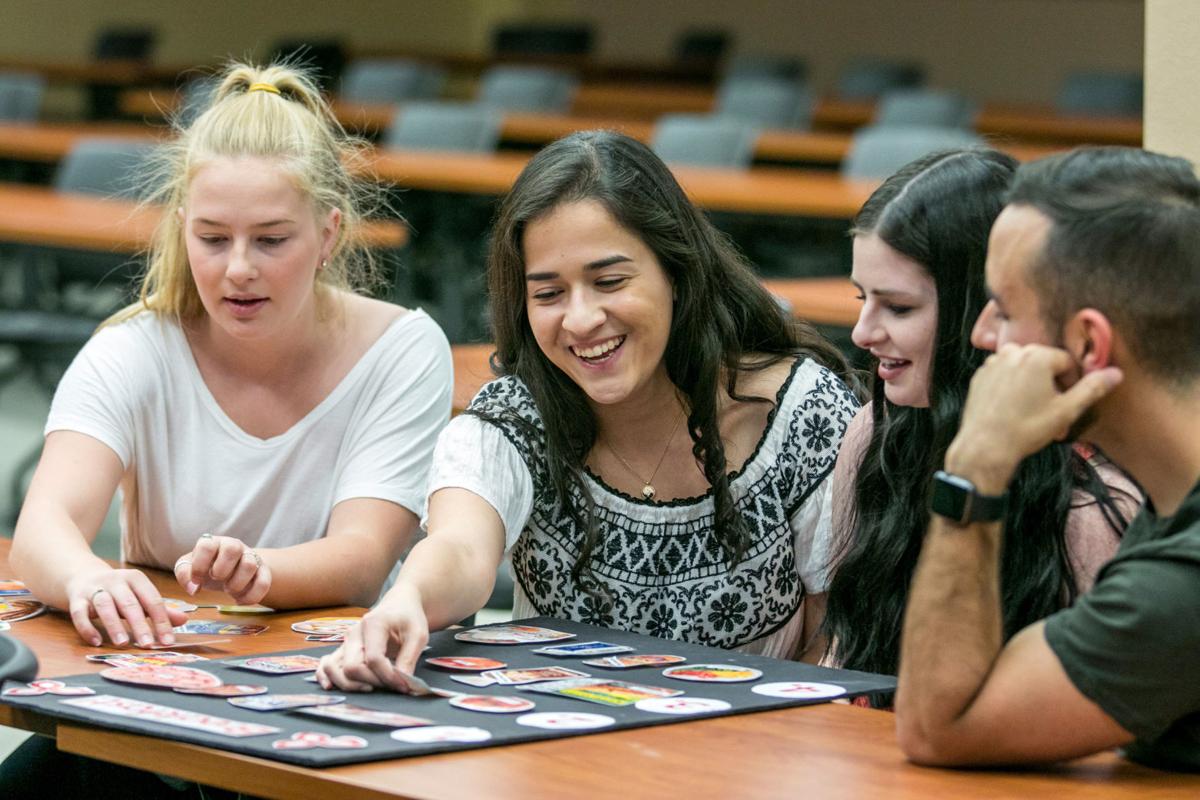 Forty-six percent of students who enter college in pre-nursing fit the groups targeted by the Arizona Nursing Inclusive Excellence scholars project, which is designed to support students from underrepresented backgrounds. 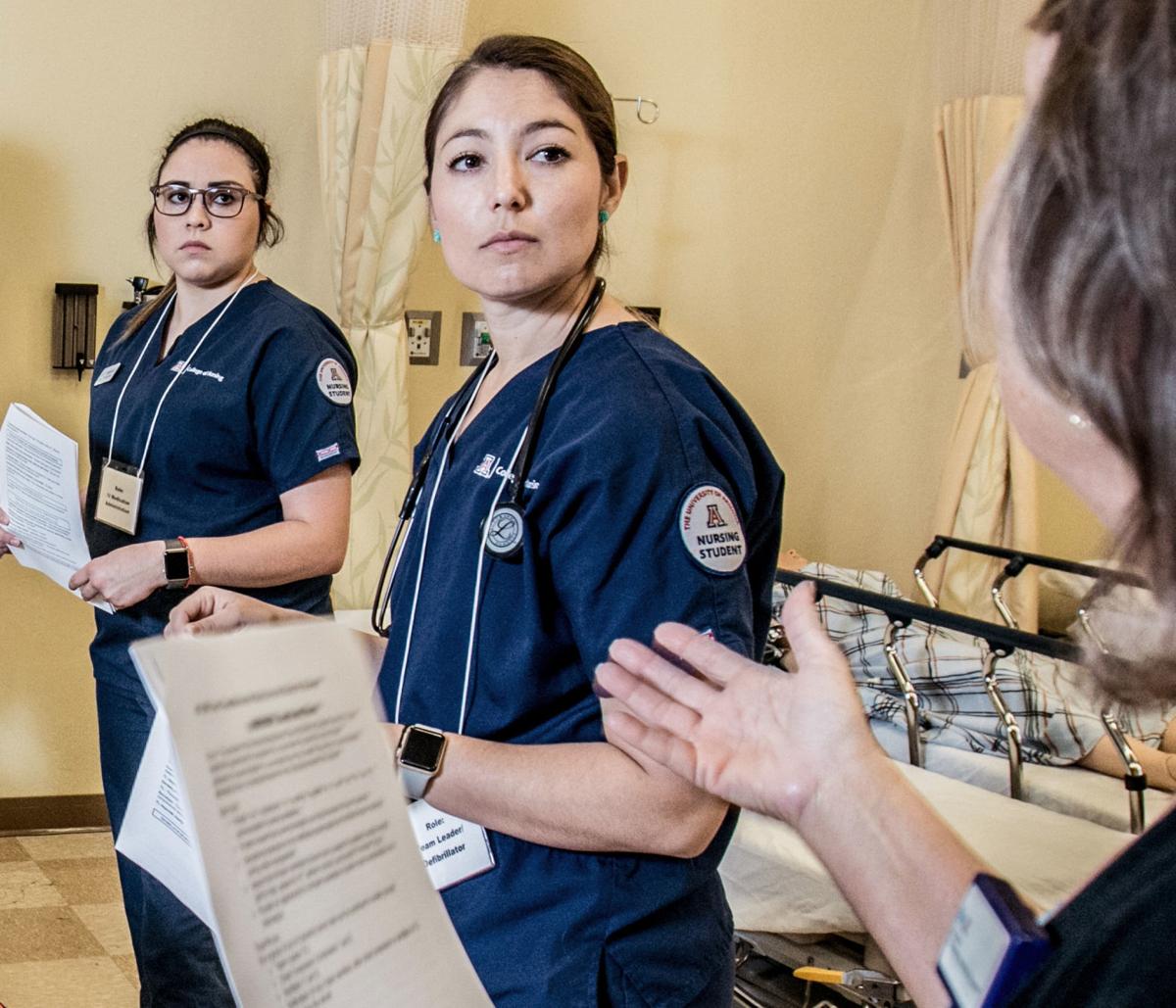 Nursing students Paloma Ojeda and Rebecca Moore listen to facilitator Dr. Wanda Larsen in a simulation lab at the University of Arizona College of Nursing in Tucson, AZ, on April 10, 2018.

By Elena Gonzalez For the Arizona Daily Star

Samaria Gregorio spent a lot of her childhood surrounded by nurses. At 7 years old, Gregorio was diagnosed with leukemia.

She was never afraid of her nurses and was always curious to see them perform different tasks. She eagerly watched as they pricked her with IV needles and proudly showed off when she swallowed all of her pills.

During her three years as a patient, Gregorio noticed something consistent about her nurses — the majority of them did not look like her.

“I only remember one of them being African-American, the rest of them were all white,” Gregorio said.

What Gregorio noticed is not uncommon. Across a variety of occupations in the U.S., diversity is lacking.

In Arizona, whites made up 61 percent of the nursing workforce in 2017, according to the Center for Health Information and Research (CHIR) at Arizona State University.

“It’s comforting for patients to see people who look like you because you can relate to them,” said Gregorio, now a University of Arizona sophomore studying to become a nurse.

With the help of a new program, the Arizona Nursing Inclusive Excellence scholars project, the 19-year-old hopes to contribute to a more diverse nursing workforce.

With the nation’s third-largest population of Native Americans and a Hispanic population of nearly 31 percent, Arizona is well suited to implement the ANIE program.

Studies have shown patients are more likely to trust their caretaker when they feel they understand them and where they come from, which can improve their overall experience, said Joan Shaver, dean of the UA’s College of Nursing.

“If that person is aware of your cultural sensitivities then they are going to be better at getting you the information you need,” said Professor William Johnson, founder of CHIR.

Whether people are conscious of it or not, they are also more likely to respond to someone who reflects their own cultural background than someone who looks nothing like them or cannot relate to their circumstance.

A more diverse nursing workforce can also reduce communication barriers that could lead to serious errors.

“There are problems in communication with people who speak different languages or speak English but may not use the same kinds of concepts,” Johnson said.

Increasing diversity in the nursing workforce is not an easy fix.

While minorities are underrepresented in Arizona’s nursing workforce, it’s not necessarily due to a lack of interest or drive.

Forty-six percent of students who enter college in the field of pre-nursing fit the targeted groups of the ANIE program, said Mary Koithan, ANIE project lead.

What they lack are the same resources and skills their peers have when coming to college, which result in the students falling behind and ultimately leaving the program.

“We’re trying to build those skills that have been shown to cause this lowered success rate,” Koithan said.

The ANIE program, which started in October, will help students build a stronger math and science foundation.

This summer, Gregorio and other ANIE members will participate in an eight-week program to help practice math, writing and STEM skills.

Gregorio values the support ANIE is providing because she missed a lot of school as a child while undergoing treatment and couldn’t afford a tutor.

Being a part of the inaugural group of ANIE members makes Gregorio — a first-generation college student — feel more at ease about becoming a full-time nursing student in the fall.

In addition to academic support, the ANIE program is connecting students with mentors from similar backgrounds.

Another goal of the program is to encourage underrepresented students to pursue doctoral degrees and become teachers.

The ANIE program is projected to support 158 students in a span of four years, although workshops and engagement events will reach beyond that, helping Arizona work toward a more diverse nursing workforce.

“This is about creating the dynamics of better and better health care,” Shaver said.

Elena Gonzalez is a University of Arizona journalism student who is an apprentice at the Star. Contact her at starapprentice@tucson.com.

Bouncing back after recession, carpenter training center reopens in Tucson

Effort seeks to address shortage of skilled labor in the construction industry.

Pharmacy student Sigrid Jimenez, left, works on a computerized mannequin with nursing students Richard Douglas, Rebecca Moore and Paloma Ojeda at the University of Arizona College of Nursing. A new program is trying to improve diversity in nursing.

Forty-six percent of students who enter college in pre-nursing fit the groups targeted by the Arizona Nursing Inclusive Excellence scholars project, which is designed to support students from underrepresented backgrounds.

Nursing students Paloma Ojeda and Rebecca Moore listen to facilitator Dr. Wanda Larsen in a simulation lab at the University of Arizona College of Nursing in Tucson, AZ, on April 10, 2018.