Everyone needs a plan B.

Tucson dancer Ashley Bowman‘s is coming to life in a 2,500-square-foot warehouse on South Park Avenue in the Lost Barrio.

But don’t look for a dance barre and wall-to-wall mirrors among the dozens of old chairs filling one of the rooms.

And there are no floor mats in the loft, where she has more chairs and end tables, all in various states of wear and tear.

Last year, as the COVID-19 pandemic was making its presence felt, Bowman had an epiphany: Turn a longtime hobby of refinishing furniture into her post-dance career.

Hence was born Of House, where Bowman repurposes antique and neglected chairs, tables, couches and other pieces into distinctive custom furniture.

“This is a life-changing, full out jazz hands pivot,” said Bowman. “I did a Bob Fosse pivot.”

From hobby to full-time calling

Bowman has been tinkering with furniture since she attended college in Pittsburgh in her late teens and was living with her grandparents.

“I picked up this old dresser from a thrift store and I sanded it and painted it. It was so much fun,” she recalled.

From that point on, Bowman, who grew up in Tucson, eschewed big-box stores when it came to furniture. She would shop garage sales and Goodwills looking for distinctive pieces that she could remake as new. The bones were there, but when she was done, the chairs, tables and dressers often bore little resemblance to the originals.

“I furnished my whole apartment in the barrio with used furniture that I redid,” she said.

But she never imagined that her hobby would be anything more than that.

Dancing was all that Bowman had known for most of her life. She started when she was 3 and never stopped, earning a bachelor’s and master’s degree from the University of Arizona and dancing for a couple small companies before she and her then husband, former Tucson Symphony Orchestra violinist Ben Nisbet, and her classmate Claire Hancock formed the progressive dance company Artifact Dance Project in 2009. It was Tucson’s first and only troupe that incorporated dance, live music and film on one stage.

“The three of us utilized dance and music as a platform for what we believed the performing arts was capable of communicating to the community,” Bowman said.

The innovative company, which was born of Bowman’s and Hancock’s master’s project performance, attracted packed audiences to its local concerts and found itself, less than two years in, on the road to China for an ambitious monthlong tour in spring 2011. They were invited back in summer 2012 for a 14-city tour that included a stop in the burgeoning metropolis of Huizhou in the Guangdong province.

But it was at home in Tucson where Artifact Dance made its biggest impression, serving as a training ground for young dancers and a springboard for Bowman and Hancock’s creative output. “Frida” in 2018 and “Goliath: A Story Retold” in spring 2019 were among the dozens of works they choreographed over their 10-year run.

“Claire and I believed in collaboration, bringing the diversity of the arts together, and telling stories through dance,” Bowman said. “We didn’t follow the trends of contemporary dance. We carved our own style and aesthetic and set the groundwork of using incredible music through Ben as our music director.”

In 2019, as Artifact Dance was marking its 10th anniversary, Bowman and Hancock decided the company had run its course.

“I wasn’t quite sure what I was going to do, but I could feel … my time with dance was fulfilled,” Bowman said. “I did a lifetime of dancing in 15 years. I have no dream left unfulfilled.”

Plan B: ‘Totally crazy and random’

As she was mulling over all those what-next scenarios that one contemplates with a major life change, COVID-19 hit. In quarantine, Bowman started filling her days with little furniture restoration projects — a hobby that gave her a chance to catch her breath.

She collected a couple pieces of broken-down antique furniture and set up a 10-by-10-foot craft-fair tent in her front yard. She ran an extension cord from the house to power an electric sander and set to work refinishing the pieces.

“I was literally sanding things in my front yard,” she said, then laughed at the impression she must have left on her neighbors.

And that’s when it hit her:

“I literally just made this decision: ‘I’ll just refinish furniture and sell it.’ It was totally crazy and random,” said the 39-year-old single mother of a 4-year-old daughter.

But in 2020, crazy and random seemed oddly normal.

Beyond the blue front door of her Lost Barrio showroom and workshop at 299 S. Park Ave. are rooms filled with old furniture in various states of disrepair and reinvention. A room off the main showroom is filled with several 1970s-era chairs strategically stacked to protect their intricately carved wooden backs.

A loft space is loosely filled with more chairs, and a narrow balcony on the other side of the room overlooks the main floor and a beautiful 121-inch black walnut dining room table. Bowman and her assistant, Antonio Gonzalez, made the table — her first original piece of custom furniture — from hand with a little help from Bowman’s mentor, Eric Touhey, who taught Bowman joinery. It’s a complex process of joining pieces of wood together without the use of screws, glues or nails and for Bowman, it was a game-changer that allows her to flex her creativity.

“It’s a ton of work,” Bowman said one day earlier this month during a break from creating new doors for an antique buffet. “Before meeting Eric, I had no idea how much strength you needed to be a carpenter.”

In the overflowing showroom, she points to a pair of parlor chairs that date back 40, 50 years that she got at an estate or garage sale. She has sanded the finish to reveal solid wood bones and plans to send the age-worn and threadbare cushions to an upholsterer who follows her philosophy of repurposing old into new again. She points to a couch near the front door that was reupholstered using a Native American rug.

“I repurpose it into something new and I take all of the old stains and finishes off, the very dated, dark stain where you can’t even see the grain of the wood,” she explained. “I get it down to the raw wood and I don’t stain it. I keep it raw.”

Like her Lost Barrio neighbors, the shops that sell kitschy Southwest artwork and knickknacks, Bowman tries to express the Sonoran Desert and Tucson in her furniture, without resorting to cliches like kokopellis and cacti.

“I’m trying to do something that’s a little more subtle,” she said.

Bowman no longer sands furniture in her front yard. She has a workshop at the back of the Lost Barrio building, which dates back to the 1940s and used to house Haskell Linen Supply. On most days, including a breezy Monday earlier this month, you will find her there, pounding and drilling and sanding.

On this day, she is recreating buffet doors, adding repurposed wood blocks to the doors. As an industrial sized fan circulated the breeze from the open garage doors leading to the alley, Bowman used a pencil to mark three spots for three screws, then used a power drill to make the holes. She finished off using a power screwdriver to secure the wood pieces.

It was all very repetitive and somewhat mechanical, which is the opposite of dance, where movements are stringed together to create fluidity and form.

Even so, Bowman says she believes dance brought her to Of House and her Plan B.

“I think dance has a huge influence on what I’m doing now,” she said. “I find it interesting how the universe charts our path.”

Location: 299 S. Park Ave, in the Lost Barrio, next to the former Tooley's Cafe

For an appointment: Call Ashely Bowman at 780-6879 or email ashley@of.house

Tucson's Los Changuitos Feos mariachi group made a name for itself across the country decades ago, amid much turmoil.

Paul McCartney's company still pays taxes on the sprawling ranch he shared with his wife Linda on Tucson's far-east side.

A love letter to a Tucson Thai restaurant

Retired Tucson nurse volunteers in a world informed by solidarity

This Tucson woman spends her retirement taking risks in an effort to help marginalized groups. 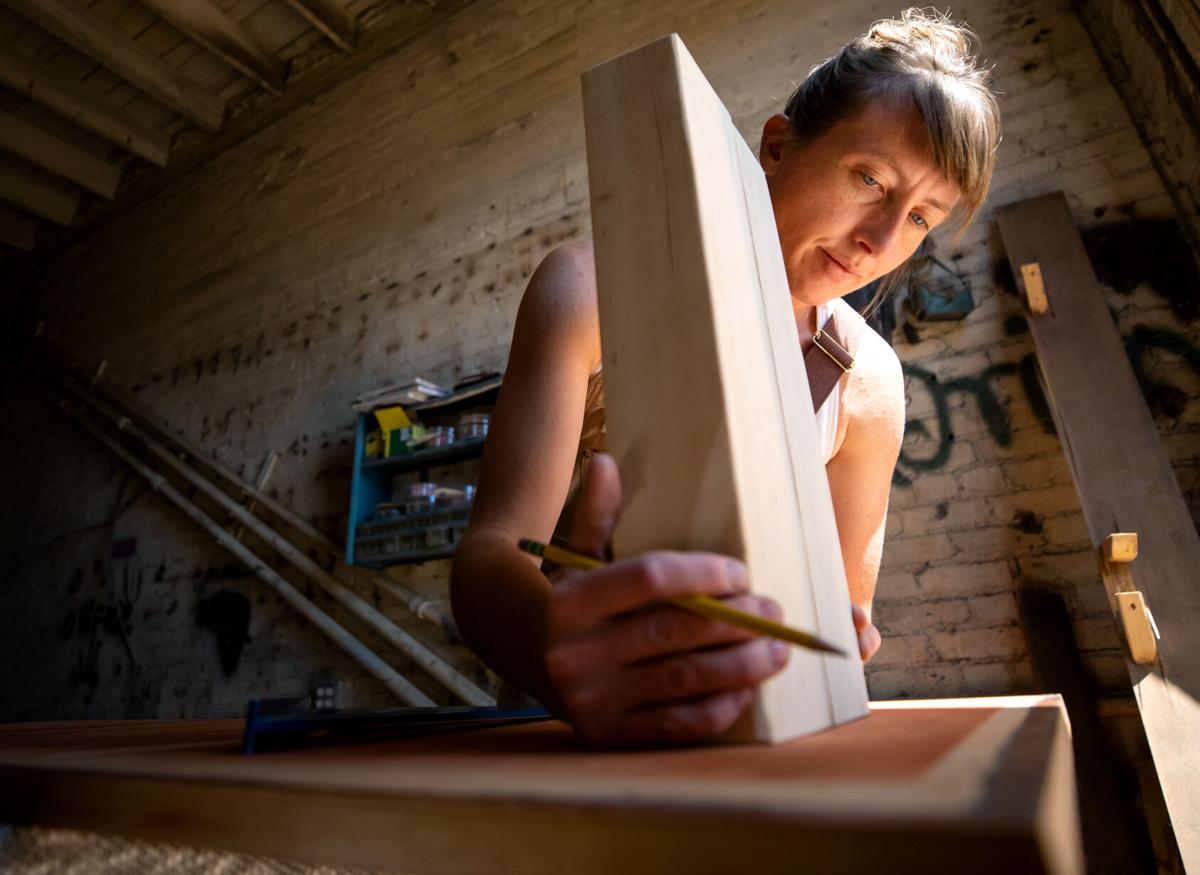 Ashley Bowman, owner of Of House, works on the legs of a coffee table at her warehouse, 299 S. Park Ave. After being a classically trained dancer, Bowman is starting the second chapter of her life repurposing old furniture. She fixes up wooden tables, chairs and coffee tables, often adding a Southwestern influence. 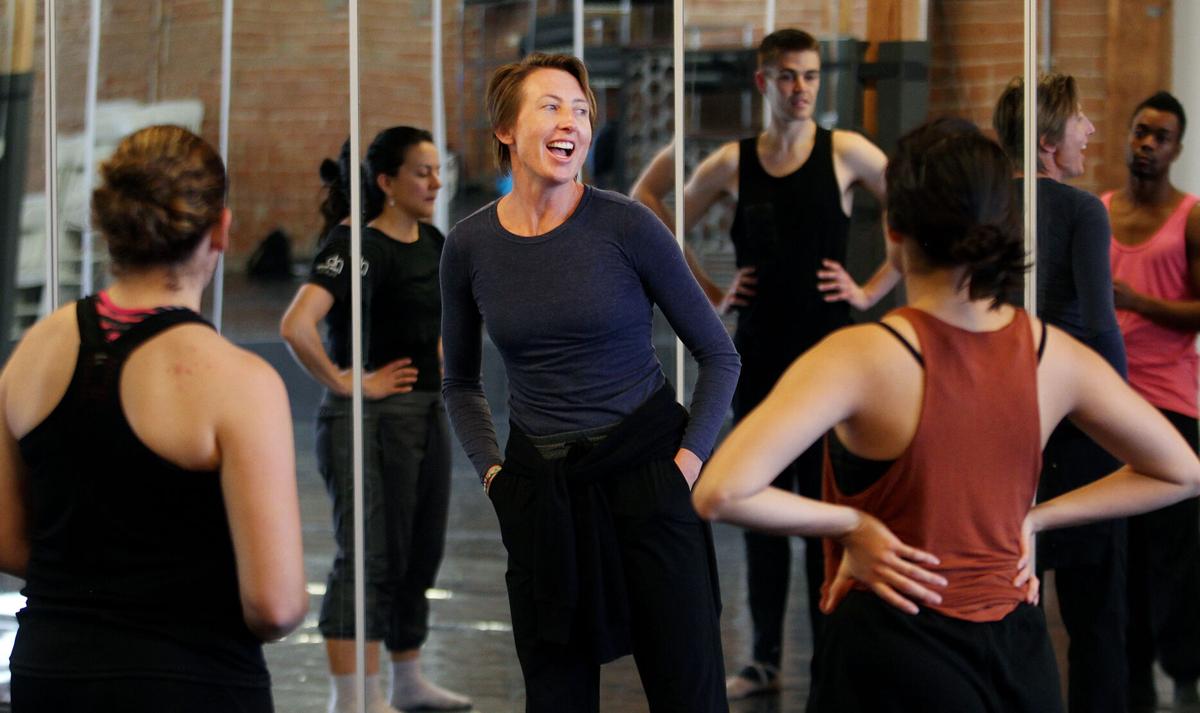 Choreographer Ashley Bowman leads a rehearsal for the Artifact Dance Project's performance of "Frida" in 2018. 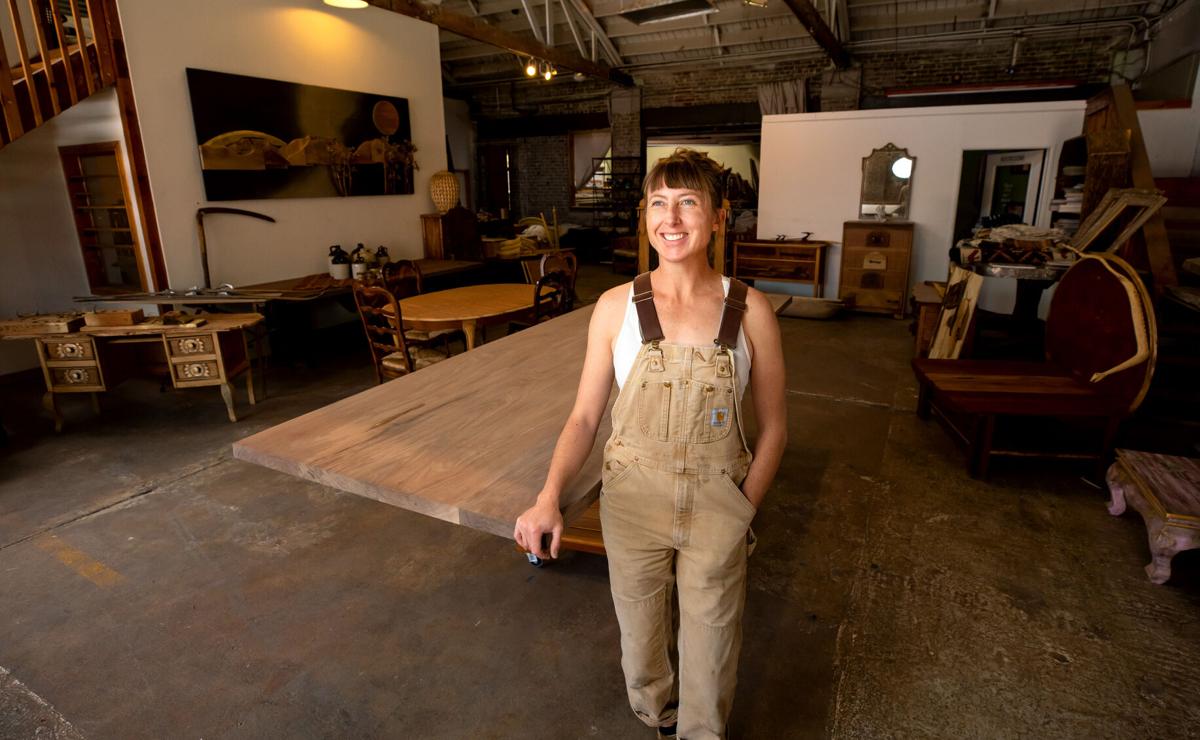 As the world shut down during the COVID-19 pandemic, Tucson dancer Ashley Bowman turned a lifelong furniture restoration hobby into her plan B. 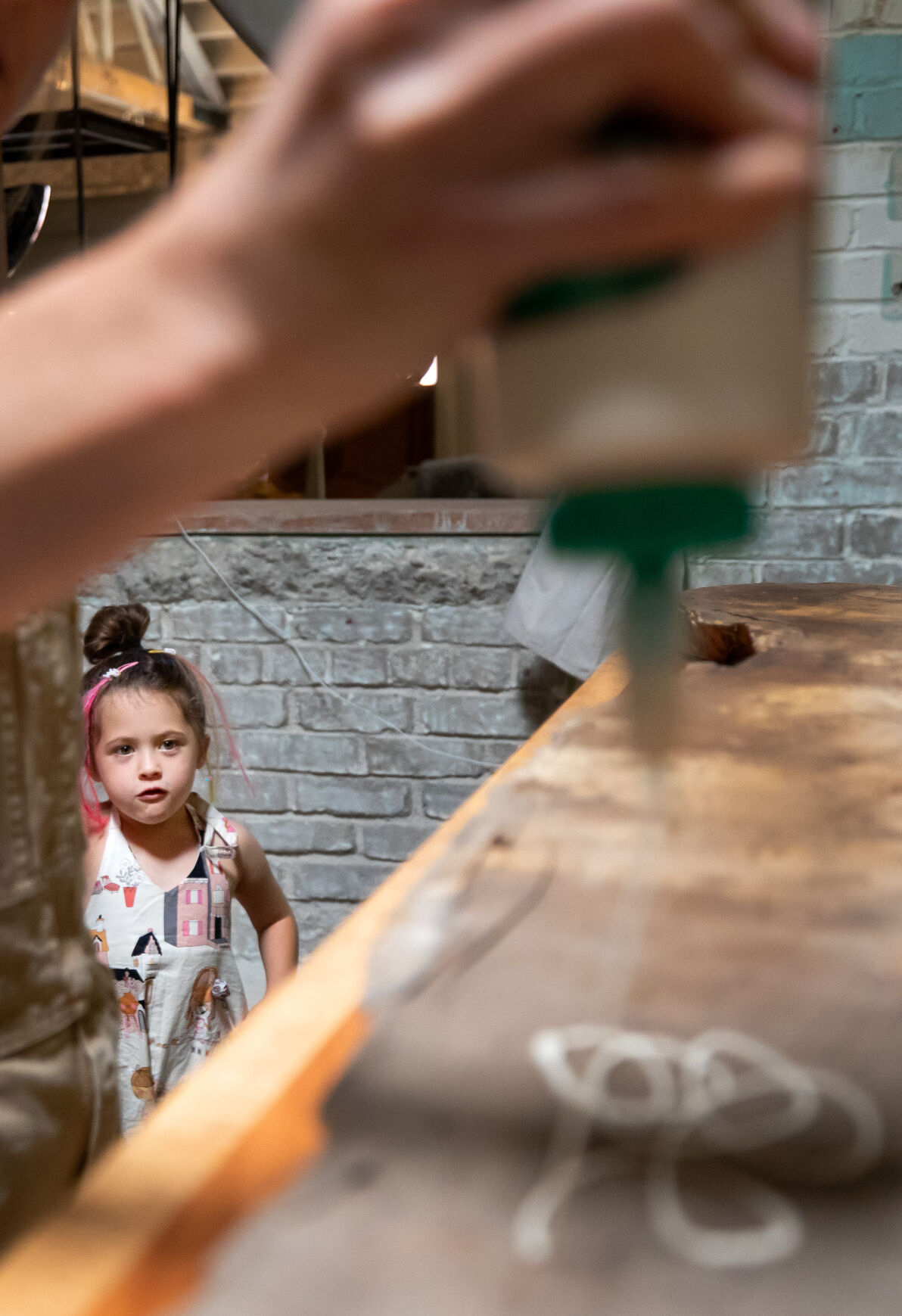 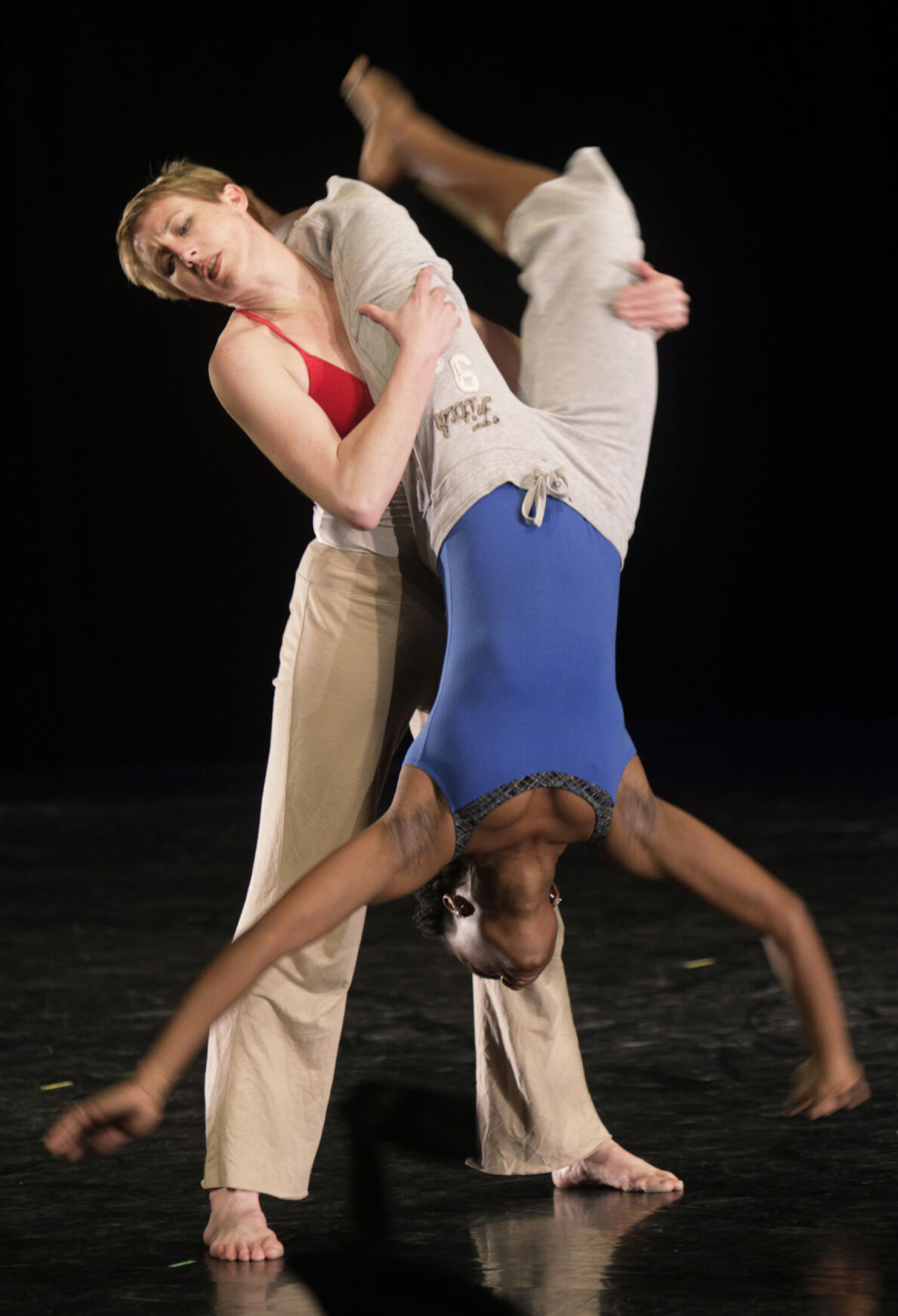 Dancers Ashley Bowman, left, and Eboni Taylor during a rehearsal of "Dance in the Red" at the Stevie Eller Dance Theatre in 2010.