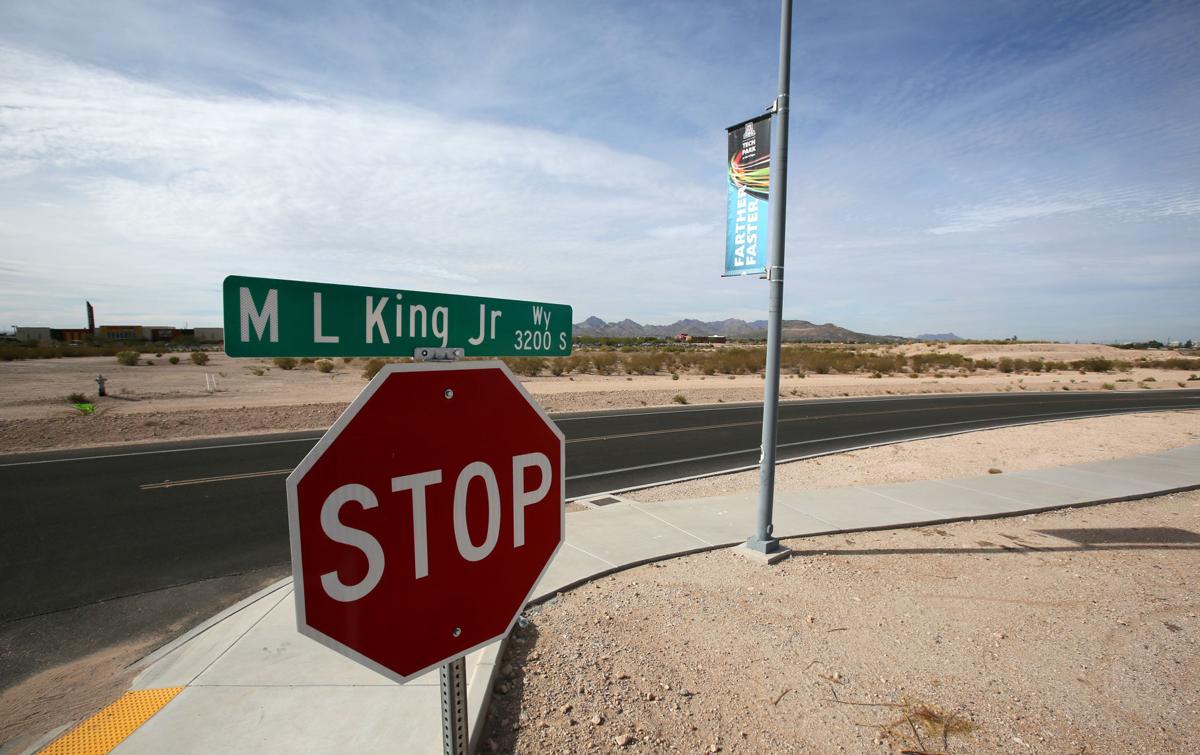 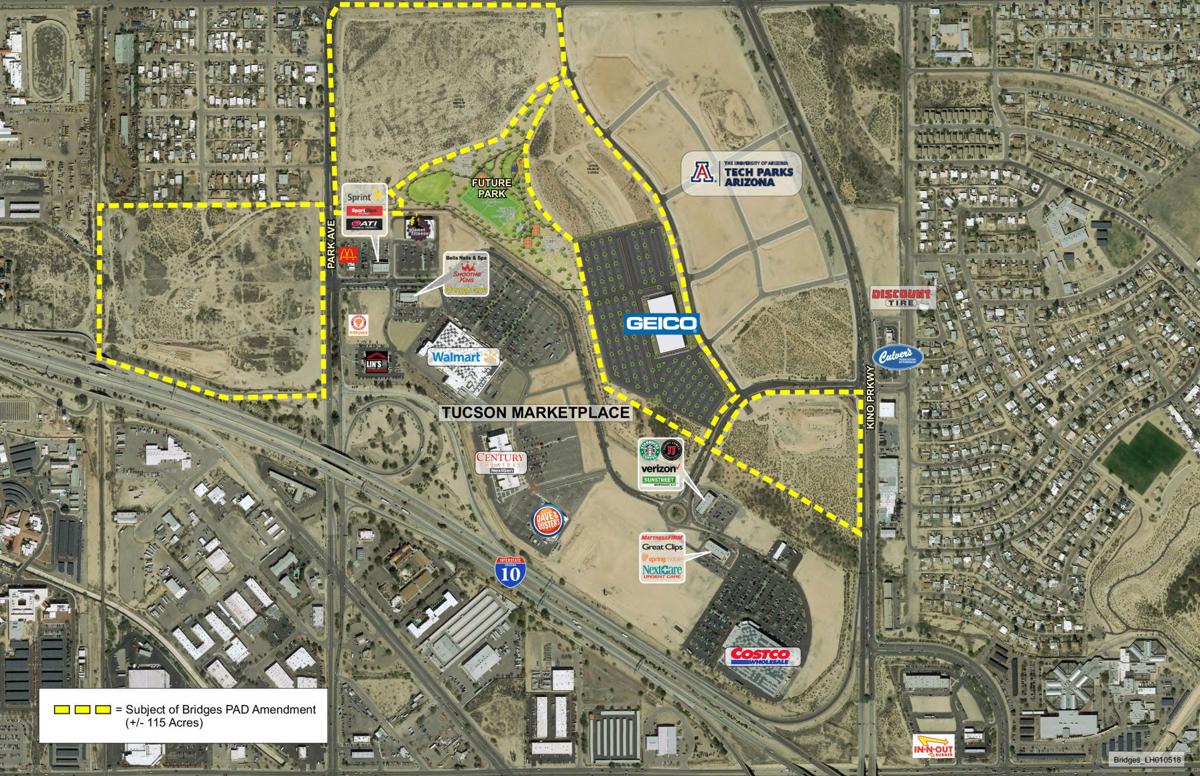 The site plan for The Bridges shows the location of new Geico offices. The move could open the area to more corporate clients.

A local developer has sealed a deal to keep Geico’s regional office in Tucson, expanding into new space and adding 700 jobs in the process.

The Bourn Companies plans to develop and build a 200,000-square-foot building on 20 acres at The Bridges, near 36th Street and Kino Parkway for the national insurer — one of Tucson’s largest employers with 2,100 workers.

“They were weighing the decision to potentially leave Tucson,” Mayor Jonathan Rothschild said. “Ultimately we were able to persuade Geico that The Bridges site would be an excellent location for them.”

The Bridges is comprised of the retail center, Tucson Marketplace and the University of Arizona Tech Park.

“We’re big believers in The Bridges’ location, and it’s an opportunity to serve companies like that in the future,” Don Bourn said.

Geico will be the first corporate employer in the development and will consolidate its employees in the new office. It plans to add 700 positions over the next few years.

Positions will be a mix of entry-level and management positions, but specifics were not available as the facility won’t be complete until mid-2019, at the earliest, officials said.

Geico’s Tucson office opened in 2003 and is currently in a three-building cluster at 930, 940 and 950 N. Finance Center Drive, near Speedway and Kolb Road.

The company is eligible for the city’s Primary Jobs Incentive Program, which allows job-producing businesses to qualify for building-fee exemptions.

Mike Czechowski, the city’s annexation manager, said criteria for the program are the creation of at least 25 jobs that pay $52,400 or more and a salary for the remaining jobs at $45,600.

He said when companies add a significant number of jobs, they may still qualify for the program even if some of the employees make less in entry-level positions.

“In that case, it would be taken to mayor and council to be decided on a case-by-case basis,” Czechowski said.

It was nearly two years ago that Bourn became aware that Geico wanted to expand its Tucson operation, but couldn’t find the right space.

He consulted with city leaders.

“That private-sector leadership is critical,” Rothschild said. “People somehow think that government will go out and create jobs and bring companies here, but government can only facilitate.”

He said the promotion of Tucson by brokers and business leaders is a significant tool in economic development.

“Don could have gone to Geico and said, ‘Hey, there’s space in another city,’ but he lives here and is committed to Tucson,” Rothschild said.

Joe Snell, CEO of Sun Corridor Inc., echoed the mayor’s sentiment and said with Bourn’s commitment to build some speculative office space, The Bridges should become a magnet for other corporate sites.

The lack of available space is a result of 24 months of good news and absorption of office space, Snell said.

“Currently, 50 percent of our pipeline is build-to-suit because we don’t have the existing space out there,” he said. “This is dangerous because a lot of these companies want to move within 14 months.”

Snell said he was thankful for the patience of Geico’s local CEO, Martha Furnas, and her team while a site was identified.

“I’m thrilled to see this happen,” he said. “It would have been a real blow to lose Geico.”

When will Arizona hire RichRod's replacement? It depends on these four factors

A 61-year-old man was killed during a gun battle between his son and an armed robber on Tucson's south side, according to the Tucson Police De…

The final piece that tied it all together was finished shortly before Christmas.

The chaos of the past week makes boosters, fans wonder just exactly how their money is being spent.

Remember Cup It Up? Top Tucson food stories in 2017

Tucson’s restaurant industry in 2017 at times felt like a rollercoaster ride, with enough twists and turns to keep us on our toes.

Hexagon Mining will add 120 employees over the next five years.

New shopping center coming to life on Tucson's south side

Plans for northwest side mall include entertainment presence, office space and hotels.

The new development would generate $8.9 million in direct sales tax revenues, says an outside consultant hired by Rio Nuevo.

I have missed only one Roadrunner hockey game since the opening day sellout. The Rio Nuevo board is proud that we provided funds for Tucson Co…

PHOENIX — A former Bank of America worker suspected of theft chose the wrong employer when applying for a police dispatch job.

If McSally announces on Friday, she will face several candidates in a GOP primary, including former Maricopa County Sheriff Joe Arpaio , who on Tuesday announced his candidacy for the post on Twitter.

Tucson weather: Storm activity to taper off this afternoon

The women had packages of pills hidden in their clothing.

Roadway is expected to be closed for two to three hours.

Employees and residents with four-wheel drive will be allowed up.

Hiring is underway for customer service agents and supervisors.

Woman was bitten in the calf when she tried to kick the fox away.

Tucson Real Estate: 4 Pinkberry yogurt shops could open in the area in next 18 months

More were looking for work in December than the number of jobs created.

Majority of new retail in 2017 was on city's outskirts.

The company is asking for city incentives to support a $6.4 million expansion.

The site plan for The Bridges shows the location of new Geico offices. The move could open the area to more corporate clients.