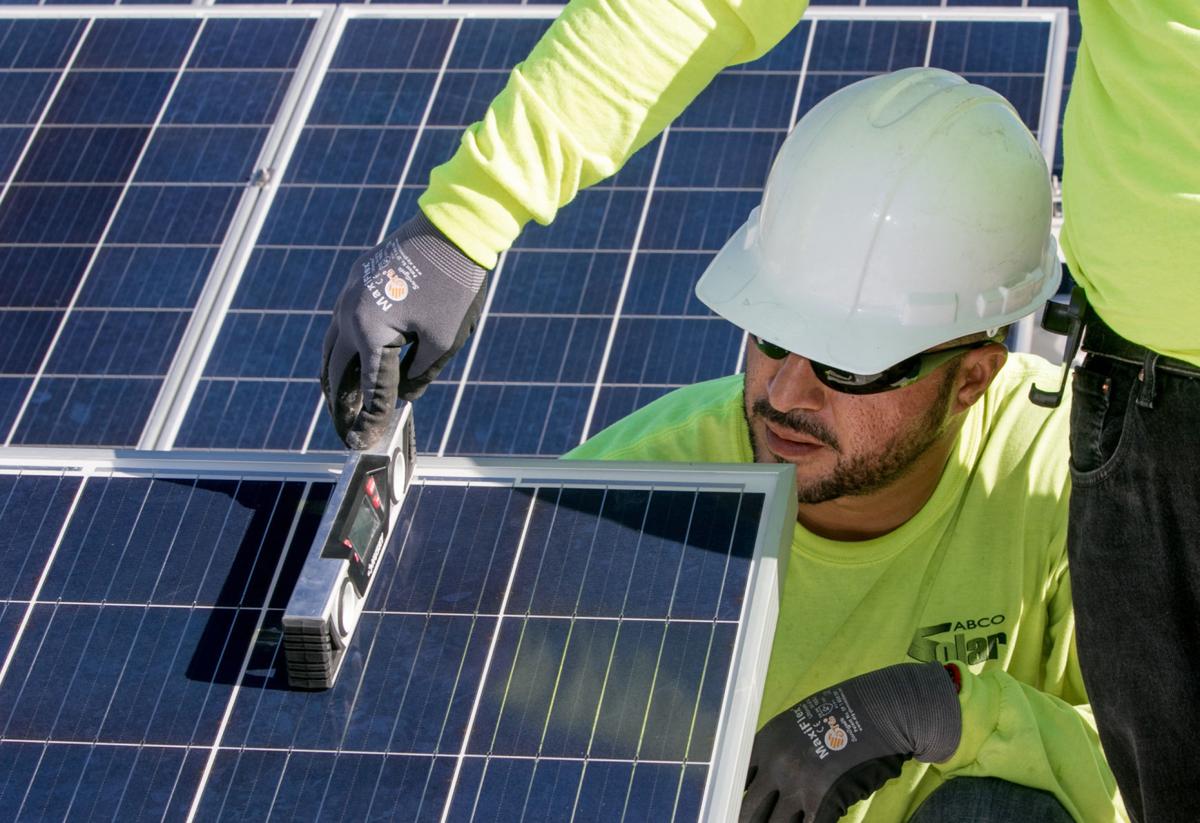 The new rates would apply to customers who apply to connect new solar systems to the power grid after a final decision.

State regulators will soon decide Tucson Electric Power Co.’s solar rate case in a ruling that will likely dictate the pace of rooftop solar installations in the area for years to come.

After a three-month delay, Arizona Corporation Commission hearings are set to start in Tucson on Monday, Oct. 23, on proposed new rates for TEP customers with new rooftop solar arrays, as well as for new solar customers of sister utility UNS Electric.

The utility says the plan would increase the average bill paid by new solar customers by $14 per month, but the typical home solar customer will still be able to save about $90 a month under initial rates.

“We’re proposing changes that will help lower costs for all of our customers while helping to bring more solar power into our community from larger, more efficient systems,” TEP spokesman Joe Barrios said.

The new rates will not affect customers with existing solar systems, or those who file to connect new systems before the effective date of the new rates, which after a series of delays now isn’t expected until February.

Barrios said the changes would reduce a cost shift that results when solar customers avoid buying power from the grid, since those costs are largely recovered through usage-based charges.

But solar installers and industry advocates say TEP could choke off demand for rooftop solar systems in a few years.

“While the TEP proposed rates would not kill solar completely, I believe adoption would slow to a crawl and would effectively cease by 2020,” local solar installer Kevin Koch, co-founder and co-owner of Technicians for Sustainability, said as a formal intervenor in the TEP solar rate case.

The move to end net metering has generated more interest from homeowners who want to install systems before the rate changes, but the uncertainty has left many customers balking at a purchase decision, said Charlie O’Dowd, president of Tucson-based Abco Solar.

“Things have slowed down now, but I have a lot of people on the fence,” O’Dowd said. “People don’t like uncertainty.”

The solar case represents the second phase of a general rate case decided in February, raising TEP’s average residential bill about $8.50 a month for typical usage.

In December, the Corporation Commission voted to end net metering — the practice of crediting solar customers for their excess power production at full retail rates — after ruling the practice resulted in a cost shift to customers without solar.

The commission ordered that state-regulated utilities propose new solar “export rates,” initially based on the average cost of wholesale power each utility gets from utility-scale solar farms, to be adjusted in future rate cases.

APS’s initial solar export rate is 12.9 cents per kilowatt hour, a couple of cents below its average retail rate, stepping down 10 percent annually and locked in for 10 years, with the option of time-of-use or demand-charge rate plans.

In its initial filing, TEP proposed a solar export rate of 9.7 cents per kilowatt hour for both TEP and UNS, with 10 percent decreases annually.

Overall, not including basic service charges, TEP residential customers on average pay a rate of 10.78 cents per kWh, while UNS customers pay an average 9.12 cents.

TEP also proposed two rate plans for solar customers, a two-part time-of-use (TOU) plan with higher charges for power usage during peak periods, and a time-of-use plan that includes “demand charges” with two tiers of charges based on highest usage during a one-hour period in a month.

Each plan would include a $10 basic monthly service charge, compared with $13 for current basic residential plans, and a monthly solar meter fee of $4.32 per month.

The two-part TOU plan would include grid-access charges of $3.50 per kilowatt of system capacity, or $24.50 per month for a typical 7-kilowatt system.

TEP said new solar customers with medium monthly usage of 964 kilowatt hours would still save about $90 on the two-part rate and about $89 on the rate with the demand charges.

The commission’s utilities staff agreed with most of TEP’s proposals but in a filing suggested a lower meter fee of $3.50 and different solar export rates for the two sister utilities — 10.5 cents per kWh for TEP and 12.8 cents for UNS Electric. Alternatively, the staff recommended a common rate of 10.5 cents.

The state Residential Utility Consumer Office, or RUCO, which advocates for residential ratepayers, proposed an initial common export rate of 9.73 cents per kWh, or separate rates of 10.5 cents for TEP and 8.2 cents for UNS.

In subsequent filings, TEP said it stands by its original proposal but it would accept the staff’s proposed combined export rate, a reduced meter fee of $3.50 and a grid-access fee of $2.50 per kWh, if the rate would be dropped 10 percent on July 1, to 9.63 for TEP and to 9.2 cents for UNS.

TEP said it would also accept RUCO’s combined export rate of 9.73 cents if it were dropped after a year to 8.76 cents.

Solar-industry groups have argued for solar export rates even higher than average retail rates, arguing for “adders” to reflect savings on transmission and distribution, such as reduced line losses, from local solar installations.

Vote Solar, a nonprofit solar advocacy group, has proposed an initial solar expert rate of 15.4 cents per kWh for TEP and 15.2 cents for UNS.

The Alliance for Solar Choice and the Energy Freedom Coalition of America — which is backed by solar leasing industry leader Solar City — have proposed export rates of 15.4 cents for TEP and 18.2 cents for UNSE.

But TEP, the commission staff and RUCO have rejected those proposals, contending that the groups overstate the benefits that solar have on the grid while ignoring some added costs.

TEP says under the revised plan with an initial export rate of 10.7 cents, the simple payback period for the typical home solar system would go from about seven years under current rates to nearly nine years initially, then to 9.6 years when it is dropped for the first time and to just over 10 years in the next year.

Koch said TEP’s estimates of payback periods under its proposal are too short, partly because they include savings from TOU rates unrelated to solar — including a $3 lower basic monthly charge.

Koch calculated that the payback period under TEP’s plan would surpass 10 years by 2019, including some other factors, including an expected tariff against Chinese solar panels resulting from a recent U.S. trade complaint, and reductions to the 30-percent federal tax credit for solar systems starting in 2020.

Koch and Abco’s O’Dowd said they’re especially worried that the export rate lock-in period of 10 years will make it difficult to finance rooftop solar systems, typically financed over 20 years, because of the uncertainty of future rates.

“You can’t make assumptions because after 10 years, you don’t know what the export rate could be … it kind of puts you into limbo,” O’Dowd said.

Koch said the proposed solar meter fees are unfair because they would allow TEP to recover the $143 cost of each meter, plus any capital costs, in just over four years.

TEP should allow solar customers, who have been paying a $2 monthly meter fee since February, to pay the meter cost upfront, he contended.

Elias and Goldwater: Arizona can learn from Nevada’s mistakes

TEP's effort to penalize solar customers is not befitting a state with plenty of sunshine and a history of conserving its natural resources.

Plan is fair to solar and non-solar customers alike.

Parents can enjoy the coffee bar or get in on the play.

Big tax cut for TEP, other utilities could trickle down to customers' bills

Tucson Electric Power Co. is exploring options including a rate cut or spending its tax savings on system improvements that would benefit customers in the long run.

The new rates would apply to customers who apply to connect new solar systems to the power grid after a final decision.