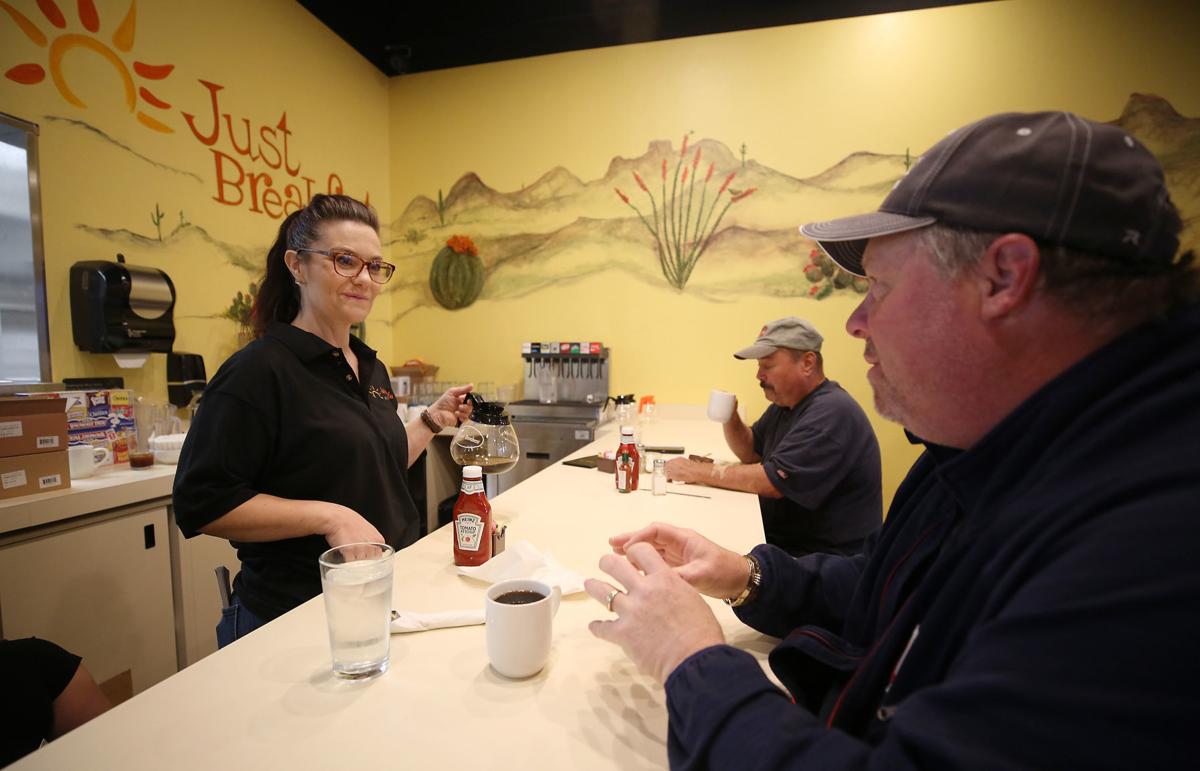 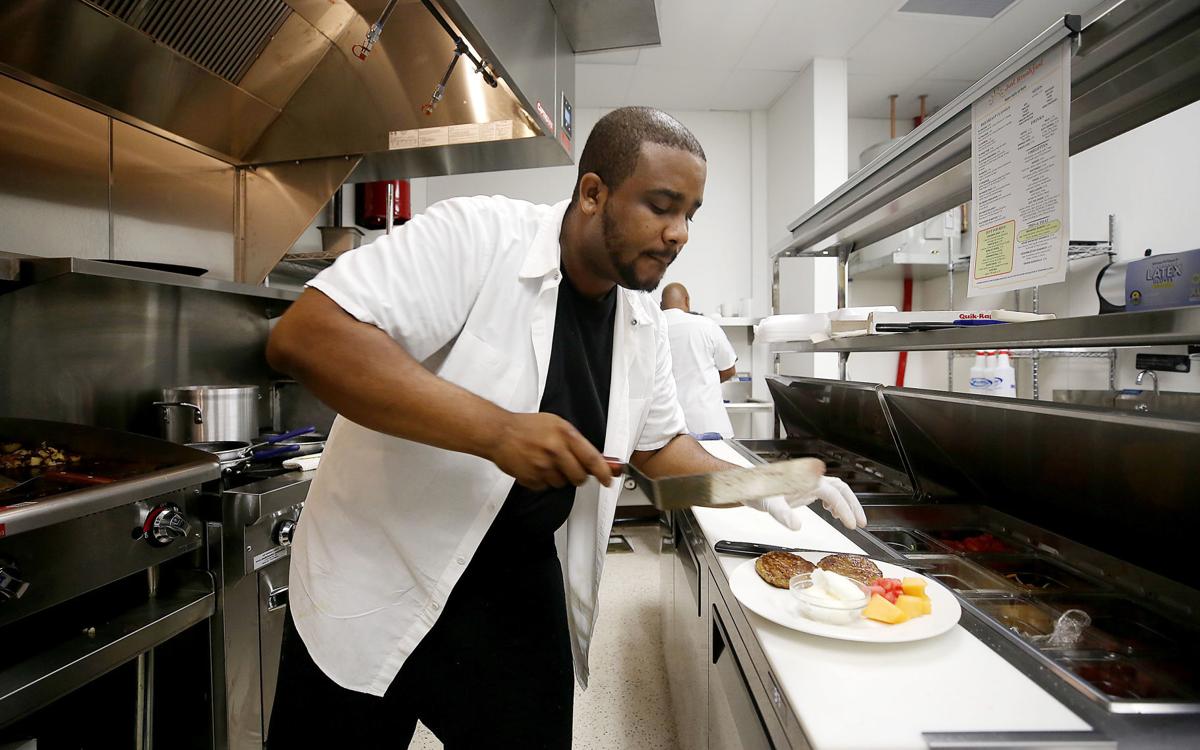 Devan Sellers serves up an order of poached eggs and sausage at Just Breakfast, which opened earlier this week, drawing customers despite little fanfare. 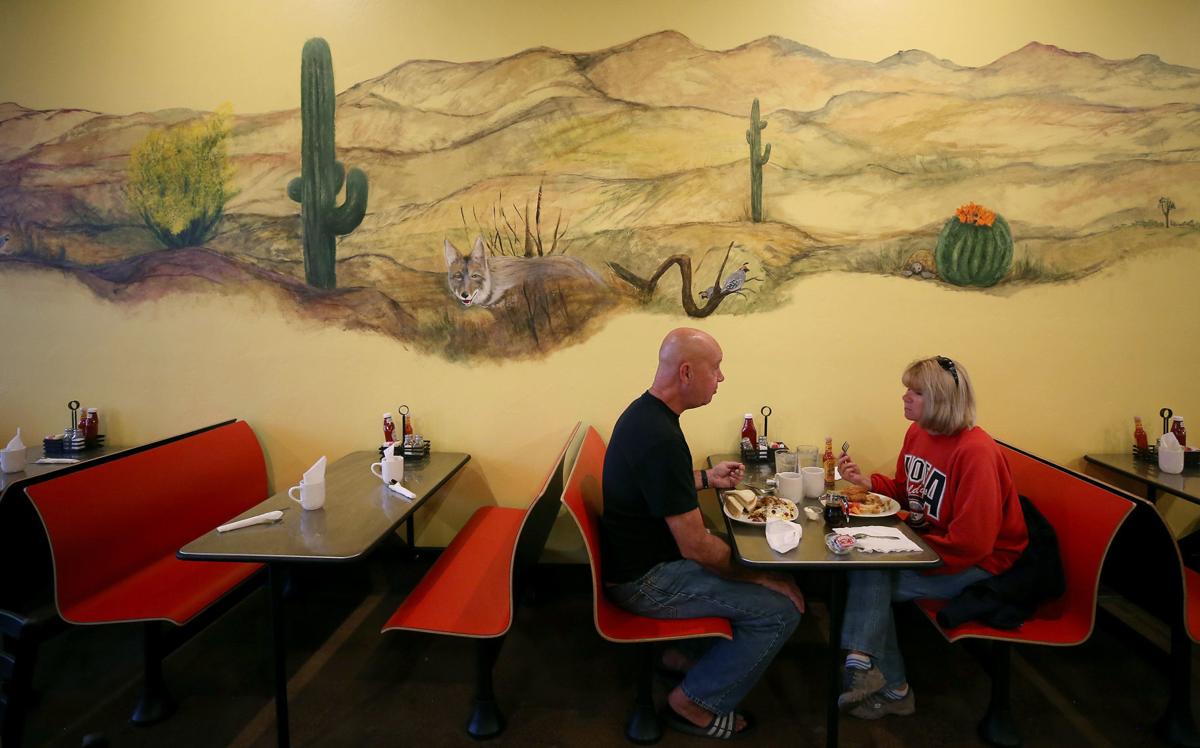 Kurt and Pam Piska were among the customers that found the Marana restaurant on Thursday. Just Breakfast opens at 6 a.m.

When it came time to decide how to use the 1,500-square-foot space next to their popular Home Plate Marana restaurant and sports bar, Rick James and his two sons, Cole and Randy Borg-James, had an idea:

What if they started a small breakfast diner?

This week, after months of planning and renovating the space, including building a separate kitchen, Just Breakfast On Silverbell quietly opened at 8579 N. Silverbell Road in Marana’s Continental Ranch neighborhood.

On Wednesday, Day 3 of the venture, nearly a dozen diners stumbled into the restaurant, mostly taking up the booths lining the walls. A handful of small tables in the middle were vacant and no one had ventured to the half-dozen swivel seats at the counter, looking into the open kitchen, where cooks John Ellis and Devan Sellers were cracking eggs and flipping pancakes just as fast as Cole Borg-James laid them down.

Cole is the new restaurant’s general manager, and older brother Randy Borg-James runs Home Plate, as their father has pretty much retired from the business.

On Wednesday, Randy popped in to help wait tables and noted that they were pleasantly surprised by the early turnout. They had not really advertised the opening aside from word-of-mouth at Home Plate and the bright “Open” sign that glares from the window.

Just Breakfast On Silverbell opens at 6 a.m., but they haven’t quite decided when it will close each day.

Cole said the idea is to serve, as its name implies, just breakfast — omelettes, eggs, pancakes, waffles and breakfast sandwiches with nothing priced over $10 — and leave the lunch and dinner to Home Plate.

“Some people don’t want to eat breakfast at a bar, and that’s understandable,” he said of why they didn’t just add breakfast to the lineup at Home Plate, which many consider more of a bar than a restaurant. “The game plan is that while the lights are off over there, we’re making some money over here.”

The Borg-James brothers broke into the restaurant business working for a fast-food chain before joining the family business. Both graduated from Salpointe High School before attending the University of Arizona.

Rick James opened Home Plate Marana in the summer of 2015 after he bought the 12,000-square-foot Monkey Business Eatertainment.

Home Plate, which includes batting cages, takes up 4,500 square feet of the space. James leased the rest of the building, including about a third of the space, to a CrossFit gym.

Will open in June at old Monkey Business Eatertainment in Continental Ranch neighborhood.

It's not too late to celebrate Arizona Beer Week in Tucson

Arizona Beer Week hops to a close this weekend, but it will not go quietly.

Oh, there is nothing like an old spiritual or traditional when it is sung with deep feeling.

Chief Chris Magnus said the department is using the reviews to improve policing, training and supervision.

Tomorrow's temperatures will be 15 to 20 degrees below average.

The proposed rule change would reverse decades of departmental policy.

Devan Sellers serves up an order of poached eggs and sausage at Just Breakfast, which opened earlier this week, drawing customers despite little fanfare.

Kurt and Pam Piska were among the customers that found the Marana restaurant on Thursday. Just Breakfast opens at 6 a.m.