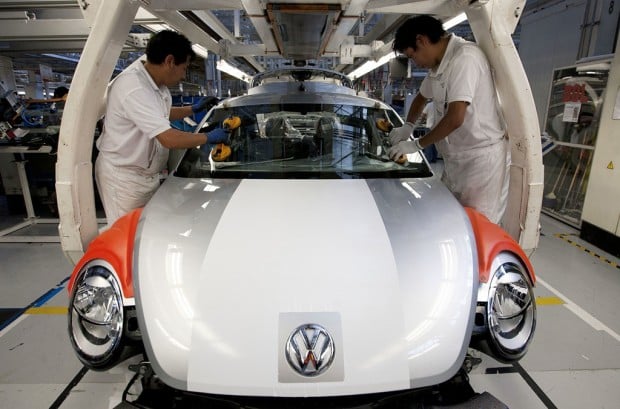 Autoworkers place a windshield on the new-generation Volkswagen AG Beetle at an assembly plant in Puebla. 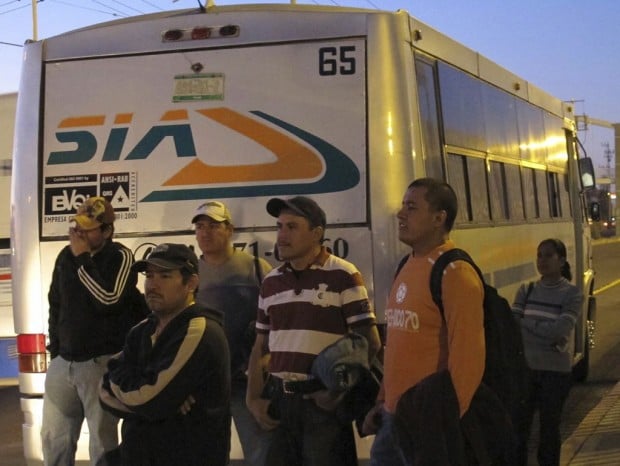 Nissan workers wait for a company-provided bus in Aguascalientes.

AGUASCALIENTES, Mexico - For 12 hours, Luis Moreno moved camshafts along the assembly line at the vast Nissan plant here, 30 seconds for each one. Now he was coming home in the dark, just as he'd left.

His five children were waiting inside. His wife. Her parents.

"I want you to know something," said Moreno, 31, outside the small house he bought last year with a mortgage financed by Nissan. "It might sound sentimental or corny. But this company has given me everything."

To be precise, Nissan gives Luis Moreno $130 a week. For that, he works four 12-hour shifts, one of 5,400 Nissan employees here making compact models such as the Versa and Sentra, performing a task so monotonous that it puts him in a trance.

At a facility that is among the company's most productive and profitable in the world, Moreno earns roughly one-seventh as much as a comparable worker at Nissan's U.S. plants in Canton, Miss., and Smyrna, Tenn.

But here in central Mexico, where the global auto industry is booming, a job at Nissan is a path to the middle class.

To work for the company in Aguascalientes today is akin to what it might have been like working in the 1950s for General Motors in Flint, Mich., or for Ford in Dearborn.

Only it is not the same.

Mexico's export-oriented auto industry has a wide, pernicious gap between the high productivity of its workers and their low pay, critics say.

Even with the lower cost of living here, the wage gap represents a hindrance to more robust middle-class growth.

At General Motors plants in Mexico, the average worker earns less than $4 an hour in pay and benefits - compared with more than $50 in the United States, according to company figures.

It is a wage disparity with sobering implications for the long-term prospects of the U.S. auto recovery. After World War II, the auto industry lifted millions of Americans into the ranks of the middle class, as blue-collar workers bought cars, made cars, and bought more cars, spinning forward a virtuous cycle of growth and development that spread prosperity across the Midwest and beyond.

Mexico's auto industry today is just as essential to the emergence of the country's middle class. The latest demographic research shows that Mexico is crossing a critical threshold, as its middle class - about 53 percent of the population - becomes a majority.

Autoworkers are churning out record numbers of vehicles in Mexican cities such as Puebla (Volkswagen), Silao (General Motors) and Toluca (Chrysler), with production up 24 percent in February over the same month last year. Several of these facilities are just as productive and technologically advanced, if not more so, as plants in the United States, Europe or Japan, where workers make far higher wages.

Mexico's cost of living is significantly lower than that of the United States, as basics such as food, housing, health care and transportation are often government-subsidized and can cost half as much or less. But manufactured goods, clothing and household appliances can be just as expensive here as they are in American stores, or even more so because of high sales taxes and other levies. To a Mexican worker making assembly-line wages that are 10 to 20 percent of U.S. pay rates, the lower cost of living is not nearly enough to compensate for the wage gap.

NAFTA, the 1994 free-trade agreement between Mexico, the United States and Canada, has put Mexican factories at the center of the hemisphere's car market, ready to supply buyers in both North and South America. In January, Nissan announced that it will build a second, $2 billion plant in Aguascalientes.

Other foreign carmakers are plowing billions more into new Mexican facilities, hiring tens of thousands of workers and insisting that their low wages do not reflect the total worth of their local contribution to Mexico's development.

Moreno, who has worked six years at Nissan, would agree. His wife is a homemaker. Their entire family is covered by a company-subsidized health insurance policy that costs the equivalent of $4 a week. Next year, Moreno - the son of a day laborer - thinks he will buy his first car, a Nissan, with a loan financed by the company. The mortgage on the family's $27,000 home is $210 a month, deducted automatically from his Nissan paycheck.

"They tell us: 'If a person is good, then the company will be good,' " Moreno said.

Mexico, too, has been good to Nissan. Japan's second-largest automaker is typically mentioned third behind Toyota and Honda in the United States, but in Mexico, Nissan marketers have practically remade the company into the country's national brand.

When Nissan built its first plant outside Japan, in 1961, it was in Mexico, not the United States. Today the company has transformed Aguascalientes, a once-somnolent farming town, into Mexico's motor city, with 700,000 residents and all the big-box symbols of middle-class success: Costco, Home Depot, Sam's Club and a growing array of Walmarts.

The drug cartels that dominate Mexico's border cities and have spread to once-safe places such as Monterrey and Veracruz seem to have little interest in Aguascalientes. It is not a trafficking hub or a drug-growing area. It is Nissan Town.

That doesn't mean residents can afford to drive Nissans.

With a population of 114 million, Mexico has about 20 million registered vehicles today, compared with 4 million in 1980, government statistics show. But sales of new vehicles in the country still lag far behind other Latin American nations such as Brazil and Argentina, and the industry blames weak sales on the 600,000 used cars that roll across the border each year from the United States.

Jose Munoz, Nissan's top executive in Latin America, said this gap reflects in part the high cost of credit, as interest rates on car loans here are well over 10 percent. The company has set up a financing center in Aguascalientes for loans. "In the next few years, I think we'll see a huge leap in the number of middle-class Mexicans buying cars," he said.

The cars produced here are overwhelmingly destined for export to the United States, with nearly two-thirds of Nissan's vehicles shipped north, notes Harley Shaiken, an expert on the Mexican auto industry at the University of California at Berkeley.

That's not how the auto industry drove middle-class growth in the United States, Shaiken argues, and he blames weak unions largely operating under company control.

In the United States in the 1950s, Shaiken said, "automakers and the (United Auto Workers) forged a link between rising productivity and rising wages at the bargaining table. And that gave us not simply a middle class and bigger paychecks, but the flip side - strong purchasing power, which fueled more economic growth.

"Has it been achieved (in Mexico)? Not quite," he said.

"It might sound sentimental or corny. But this company has given me everything."

Autoworkers place a windshield on the new-generation Volkswagen AG Beetle at an assembly plant in Puebla.

Nissan workers wait for a company-provided bus in Aguascalientes.