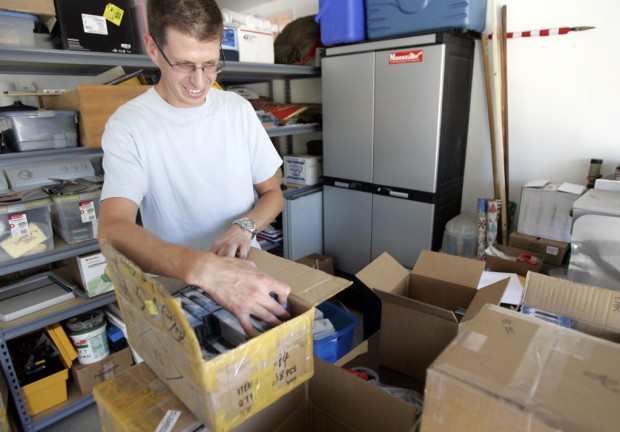 Kevin Goldstein prepares his single earbuds for shipment from in his garage. For safety reasons, they're better than having both ears plugged while riding a bike "As a kid, I did a lot of programming stuff, but I'd never had anything manufactured before," he said. 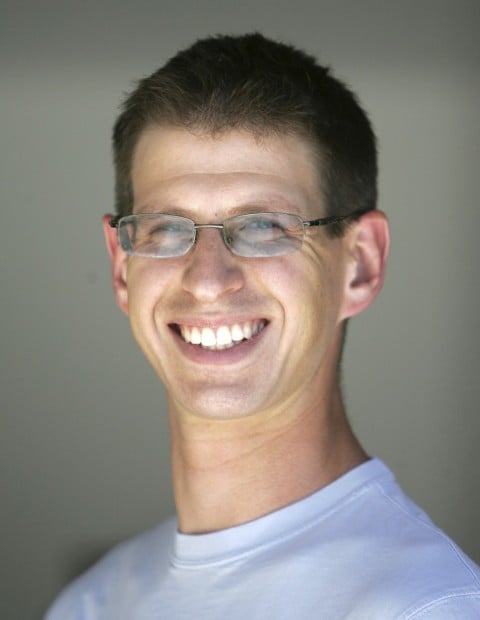 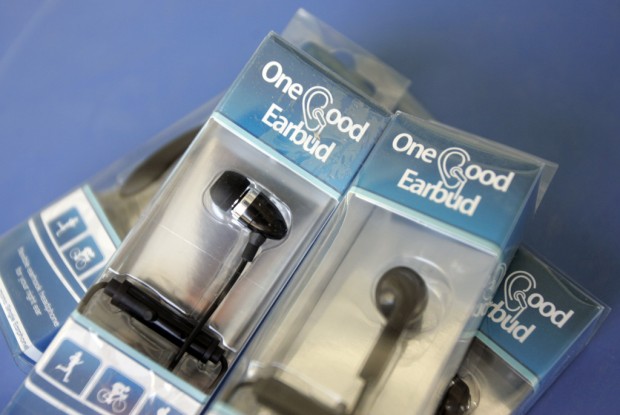 There are four One Good Earbud options, with plans to increase the product line to 10.

Kevin Goldstein prefers not to be called an inventor.

The way he sees it, he took an idea that had been floating around awhile and found a way to market it.

Thus, One Good Earbud was born.

After gaining weight in his 20s, the Dove Mountain resident, 35, began looking for activities to help him trim down.

He tried running and didn't like it. But while he was doing it, he listened to music as he ran, with earbuds in both ears.

Then he discovered cycling at the end of 2006.

He eventually wanted to listen to music while riding, but for safety reasons he didn't want both ears plugged. He also didn't want to use just one of the two earbuds because it split the music and affected the sound quality, he said.

He found a company that made a single earbud and began to resell the product online in 2010. But there were quality issues.

"The fact that they weren't mine, I couldn't fix them," Goldstein said. He found himself replacing a lot of them for free to keep customers happy.

So he decided to come up with his own design and have it manufactured. His background is in programming and database design.

"As a kid, I did a lot of programming stuff, but I'd never had anything manufactured before," he said.

He began working on prototypes.

In November, he took a leap and began working with a manufacturer.

He built a website to show the manufacturer what he was planning, and someone came along and placed an order.

The first shipment of earbuds he designed - there are four options, with plans to increase the product line to 10 - arrived this spring in tiny plastic bags.

That's fine for filling online orders - prices begin at $19.95 - but Goldstein's next step is to get the product into local cycling and running shops.

The product already is gathering fans.

Michael McKisson, publisher and editor of TucsonVelo.com, a cycling community news blog, wrote about One Good Earbud in a recent entry.

He discovered the product on Facebook and was pleased to find out the company was local.

The big concern about using two-ear earbuds is that a rider can't hear traffic, and some purists will say that even one earbud isn't safe, McKisson said.

But he thinks One Good Earbud is a good compromise.

He said his choice has less to do with sound quality and more to do with the inconvenience of the second, unused earbud bouncing around and catching on things while he rides.

"I really like having just one cord. It makes it a little nicer and less cumbersome," McKisson said.

When she found One Good Earbud, she sent the company a Twitter tweet and got to test a prototype.

"I was really impressed that not only was this product in existence, but a lot of their materials are about safety for runners and cyclists and making sure they're aware of their surroundings," she said.

Goldstein said he funded the company on his own, setting aside money as he went along.

"I've taken the company real slow, to say the least."

Kevin Goldstein prepares his single earbuds for shipment from in his garage. For safety reasons, they're better than having both ears plugged while riding a bike "As a kid, I did a lot of programming stuff, but I'd never had anything manufactured before," he said.

There are four One Good Earbud options, with plans to increase the product line to 10.
© Copyright 2020 Arizona Daily Star, 4850 S. Park Ave. Tucson, AZ | Terms of Use | Privacy Policy
Powered by BLOX Content Management System from TownNews.com.
You don't have any notifications.