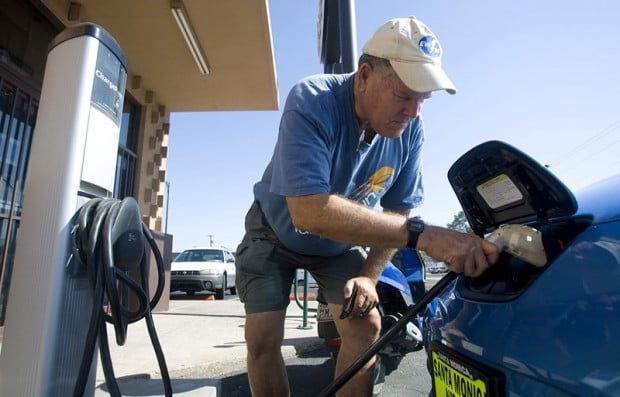 Jerry Asher, a Tucson Electric Auto Association member, recharges his Nissan Leaf electric car at a charging station at Bookmans, 1930 E. Grant Road. Asher plans to share use of the car with his brother, who lives in San Diego. Asher recently drove the car from San Diego to Tucson. 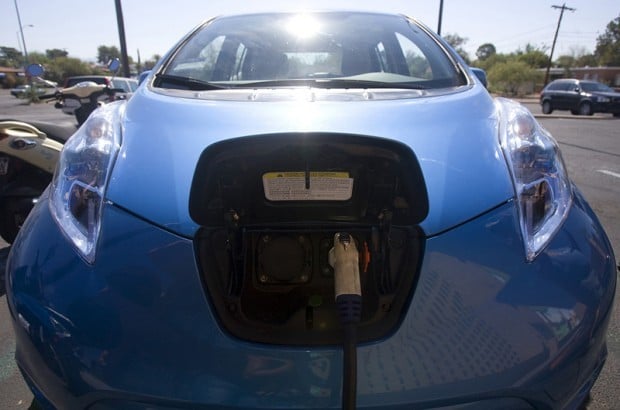 The Nissan Leaf electric car, being charged at Bookmans, has a range of 100 miles. It takes about eight hours to fully charge the Leaf with a 220-240-volt charger.

Many people look at electric cars and see only limitations.

Stretching those possibilities to the limit, Asher recently drove his Nissan Leaf plug-in electric car from Santa Monica, Calif., to Tucson — despite the all-electric’s range of about 100 miles per charge.

The trip took Asher a week with stops for recharging — as opposed to about eight hours for a straight drive with a stop for gas.

But speed wasn’t really the point for Asher, who described the journey as part leisure trip, part goodwill tour for the spunky little Leaf.

“This car is being put to the test, because it’s really a city car with a 100-mile range,” said Asher, a 66-year-old retired Army sergeant major who calls himself “EVJerry.”

Asher, who took delivery of his Leaf about two weeks ago, started his journey from Santa Monica Nissan, where he bought the car from longtime electric-car advocate Paul Scott.

After swinging down to visit family in San Diego — he plans to share his Leaf with a brother who lives there — he drove through El Centro, Calif., to Yuma, then through Gila Bend and Phoenix and Casa Grande to Tucson, a route he calls the “historic Arizona Green Cactus Run.”

Along the route, which included parts of old Highway 80 and Interstate 8 — partly along the historic Butterfield Overland Stage route — he stopped to charge up and hobnob at dealerships during stops including Imperial, Calif., Yuma and Phoenix. He spent a night in Casa Grande to make the trip to Tucson. He stayed overnight and recharged at the U.S. Naval Air Facility in El Centro, and took advantage of free, faster charges offering 220-240-volt fast chargers at several dealerships.

Someday, Asher hopes enough public fast chargers — including 440-volt systems that can give an 80 percent charge in about 30 minutes — will be in place to allow Leaf drivers to make it from San Diego to Tucson in 24 hours.

Asher said he stopped often enough that running out of juice wasn’t an issue though he got a little nervous when his car’s energy monitor showed just seven miles left on the way to Yuma.

“But it was this fun time, leisure trip, and I had no appointments,” he said.

Asher, who has driven several electrics over the years and had an electric Oldsmobile made for him by a North Carolina high school, believes electrics are the key to shaking off America’s dependence on foreign oil.

“America needs to regain its independence, and we can’t do that without energy independence,” he said, adding that by making more electric power with solar and other renewables, America can “gain and maintain our electric energy future.”

Meanwhile, local Nissan dealers say they’ve delivered nearly 50 Leafs and interest remains high as gas prices spiked in late spring. The cars list for about $33,000, or about $33,700 for the deluxe SL model, and buyers can get a federal tax credit of up to $7,500.

Nissan officials have said at least 1,000 Leafs have been ordered through dealerships in Arizona, one of five states in Nissan’s initial rollout, though some buyers come from other states.

“The interest has not slowed one bit,” said R.J. Blevins, Internet fleet manager at Thoroughbred Nissan.

Thoroughbred has had 43 Leaf orders and has delivered 18 cars, he said.

The earthquake and tsunami in March in Japan, where the Leafs are made, slowed car deliveries briefly but they are back on track, the dealers said. A Nissan plant in Tennessee is scheduled to start producing Leafs in late 2012.

Jerry Asher, a Tucson Electric Auto Association member, recharges his Nissan Leaf electric car at a charging station at Bookmans, 1930 E. Grant Road. Asher plans to share use of the car with his brother, who lives in San Diego. Asher recently drove the car from San Diego to Tucson.

The Nissan Leaf electric car, being charged at Bookmans, has a range of 100 miles. It takes about eight hours to fully charge the Leaf with a 220-240-volt charger.