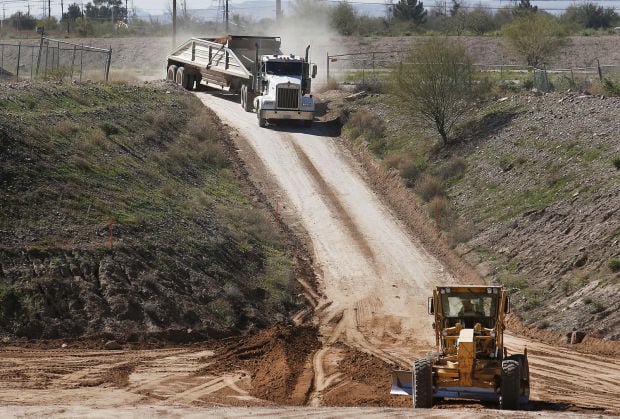 This area west of the Santa Cruz River, which holds two old landfills, has long been the target of development. 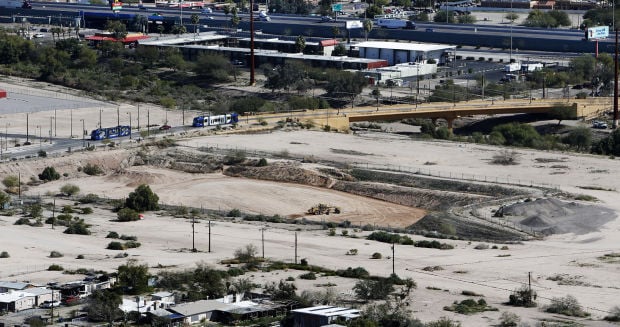 An excavated hole lies west of Interstate 10, south of West Cushing Street where a parking garage was planned. A consultant is looking a the 27-acre site for possible development. 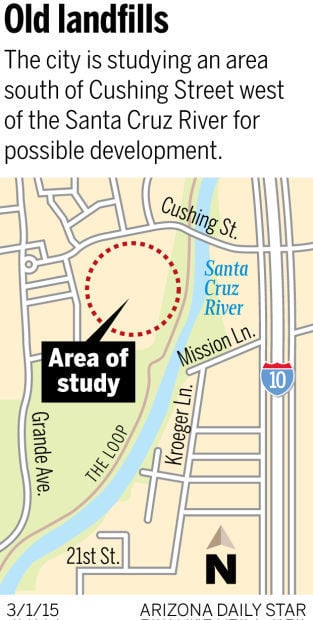 This is Tucson’s land of broken dreams, a place where study after study and committee after committee have looked for decades at possible development to turn the west side into a magnet for tourists, culture lovers and shoppers. But little happened, and most plans sat on the shelf.

Now, a consultant hired by the city is looking at the potential for cleaning up one of the area’s biggest lingering problems — two municipal garbage landfills dating to the 1950s — and turning an eyesore into an asset.

IRG LLC of Denver will spend about 10 weeks evaluating the costs and benefits of making 27 acres of this property habitable for development, as well as the merits of development itself.

Part of this property, bordered by Cushing on the north and Mission Lane on the south, is supposed to be the site of the Tucson Origins Heritage Park. That’s a longtime centerpiece of this area’s redevelopment hopes that has been largely stillborn since about 2008 due to lack of funds in the Great Recession and its aftermath.

Officials are hoping for some kind of private, “mixed-use” development of homes and businesses on the rest of the site.

The Denver consultants will return with recommendations to neighbors, city staff and the City Council. The council along with possible future private investors would make the ultimate decision on the area’s fate.

The idea of another study here raises more than a few eyebrows among weary west-side residents. But it triggers hope as well as wariness. They hope that fixing the landfills will remove one of the biggest obstacles to redevelopment — the uncertainty triggered by an environmental nuisance whose remediation cost is unknown.

Much of this area, now considered part of the Menlo Park neighborhood, was targeted in the late 1990s and early 2000s as a future home for a major complex of museums — science, cultural and history-based — that was to be the centerpiece of the ill-starred Rio Nuevo project. After tens of millions of dollars were poured into studies of these and other ideas, most didn’t materialize, in part because of the financial crisis. Also, city officials concluded the museums would be too expensive to run.

A big hole in the ground south of Cushing stands as a symbol both of the shattered past plans and of future hopes. That part of the landfill area was excavated and completely remediated a decade ago, to make way for a parking garage, recalls City Councilwoman Regina Romero, who represents the area. The garage was never built because of the recession, but is now being reconsidered, she said.

While many neighbors say they would accept or welcome compatible development, they want it to match their vision for the Tucson Origins historical park, which would celebrate what is known as Tucson’s birthplace.

They say they don’t want the home of what’s known as the historic Convento, site of a two-century-old, two-story structure that served as a home for Franciscan priests at the Mission of San Agustín, to become surrounded by high-rises and big boxes.

The Menlo Park Neighborhood Association, for one, has already laid out its vision, seeking development along what it calls smart growth principles. They include “green” buildings, native landscaping, transit-oriented development, architecture matching regional styles, and, above all, affordable housing serving working-class families as part of a broad mix of housing types.

Yet Menlo Park Neighborhood Association President Gene Einfrank sees the city’s hiring of the Denver group as a step in the right direction, as does a consultant who’s working with another surrounding barrio, Kroeger Lane.

“That’s evidence that they are truly committed to doing something of value not only to that specific area but the surrounding area,” said Awilda DiCarlo, who is working with Kroeger Lane on economic development issues.

“Anything that can be done to move forward with development in that area, I think is positive,” Einfrank said.

The cross-current of hope and wariness played out at a recent public meeting, run by city staffers and attended by close to 20 west-siders as well as by developers.

Two top officials of IRG, short for International Risk Group, laid out their approach. IRG specializes in advising other parties about how to remediate and redevelop what’s known as “brownfields” — lands known to have some sort of environmental problem, such as contamination from waste disposal.

Tucson officials say, however, that these landfills now under study are known to have accepted only standard municipal garbage. All substances found in underlying groundwater are at levels below state water-quality standards and the methane production is minimal, they say.

“Our concept is not necessarily to come up with one solution for you, but to start to highlight the tradeoffs that the parties need to think about,” said Brent Anderson, IRG’s CEO. “In our experience, we’ve seen a lot of communities go out and come up with a chalk drawing of what could be, but not based on economic realities of the day. They looked great, but they were stillborn.”

Mike Malley, an IRG vice president, said the consultants will examine alternatives ranging from fully excavating the landfills to leaving them as is, with some kind of engineering controls installed to prevent problems such as methane leakage.

“We want to establish the most probable use for the site that’s legally and physically possible and financially feasible,” he said.

One possibility is a public-private partnership to finance projects, said Elaine Becherer, an assistant to the city manager.

Katia Peterson, co-chair of the group Friends of Tucson’s Birthplace, asked, “I don’t mean to be naive, but does the city have a budget for this?”

Pressing, Peterson asked: What would be the cost of total remediation, for instance? Her group runs the four-acre, Pima County-owned, Mission Garden site near the 27 acres, and has been pushing for rehabilitation of the Convento site and for the Tucson Origins park in general.

“It’s a little unfair for them to answer that question, for them to give you a number now,” Becherer said. “What if the number is higher, and this number gets out, gets in the newspaper?”

The city has to be thoughtful and strategic because it’s in another difficult budget year, added Nicole Ewing-Gavin, the city’s director of integrated planning.

“It’s not to say that we couldn’t later. We’re looking to create something like an improvement district and see, can the private sector help?” Ewing-Gavin said.

Lorraine Bartlett, who lives near the site, in the Barrio Sin Nombre neighborhood, said she knows what’s in those landfills because she used to play there as a child.

“There’s a lot of trash, junk, cars and refrigerators there and stuff that was put in to cover it up,” said Bartlett, now 63.

“All the neighbors feel they can’t build in that area because it will sink,” Bartlett said. “You go in that property, you see the ground moving up and down. If you start that again, to try to clean it up, will you move us out for awhile and move us back in after it’s done?”

Ewing-Gavin responded that the IRG officials are staying at the Hilton East Hotel, which was built at 7600 Broadway decades ago atop an old landfill.

“Almost anything can be built on a landfill,” she said.

Later, Romero said she’s upbeat about the area’s possibilities. “It’s been a long time in coming,” the councilwoman said.

This area west of the Santa Cruz River, which holds two old landfills, has long been the target of development.

An excavated hole lies west of Interstate 10, south of West Cushing Street where a parking garage was planned. A consultant is looking a the 27-acre site for possible development.