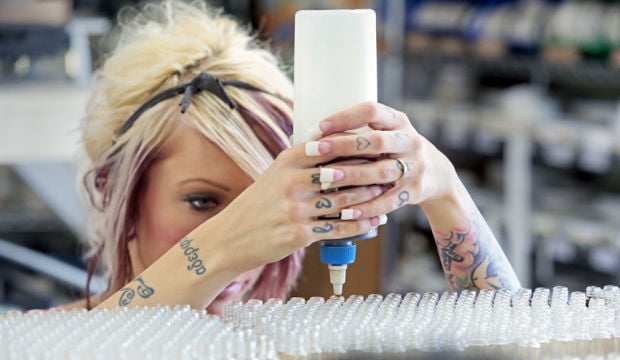 Danae Lynn Goodman fills one ounce bottles of Black Coconut Fragrance Oil at Kuumba Made, a body botanical manufacturing business, 410 E. Fort Lowell, on Wednesday, June 5, 2013 in Tucson, AZ. The company ships more than 300,000 of the 1 ounce bottles a year. 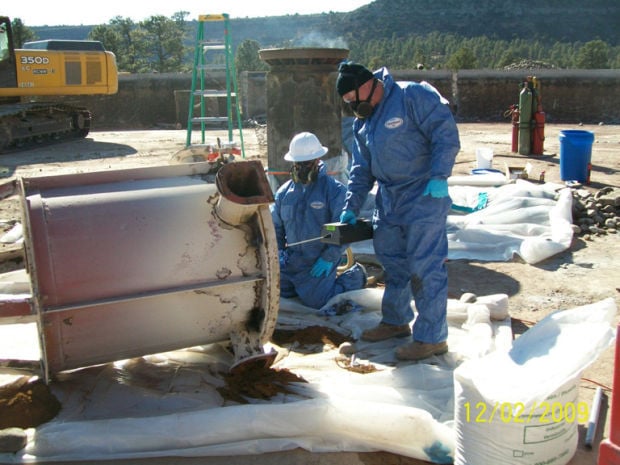 An estimated 75 female-run businesses in Tucson bring in at least $1 million per year in revenue, according to the Women Presidents' Organization.

So far, 30 of them have joined a new Tucson chapter of the organization, a global peer advisory group for women who run or own million-dollar businesses, said Kandy Hirsch, the local chapter chairwoman.

Nationally, about 20 percent of $1 million businesses are owned and run by women - and many of these businesses have surpassed the multimillion-dollar mark. The number of female-owned businesses has increased 59 percent nationally since 1997.

In Arizona, there are 137,600 female-owned firms, says a new report called the State of Women-Owned Businesses. The report, commissioned by American Express Open, placed Arizona in the top 10 states for female-owned businesses.

While many of those firms are in Phoenix, Tucson women are representing the Old Pueblo well.

In Tucson's chapter of the Women Presidents' Organization, Hirsch acts as a coach, mediator and facilitator at the monthly gatherings, where members discuss issues, problems and successes.

"Women need connection with each other," Hirsch said.

Despite the diversity in the types of businesses represented, Hirsch said many of them face similar issues.

Group discussions are confidential to create a trusting environment for women to open up.

"The trust is amazing," said Kuumba Piazza, owner of Kuumba Made. "We really support one another."

From a body botanicals manufacturer to an environmental remediation company, the following five businesses bring in more than a million dollars each year and are all run by Tucson women who belong to the organization:

Kuumba Made creates and sells natural fragrances, botanical body care and herbal first-aid products. Piazza started the company about 30 years ago after friends from the Caribbean taught her how to make coconut oil.

"I'd sit on the floor of my apartment and grate coconuts by hand," she said of her humble beginnings. "I used to sell my products on the streets."

It took some time, but Piazza recently exceeded the $1 million mark. "I feel like I just climbed the ladder. I did it all myself," she said.

Piazza said she's been satisfied with growing slowly, but since joining the WPO, she feels inspired, and feels it's helping her grow her business even more.

Kuumba Made products are available at about 90 percent of Whole Foods Market locations.

The company started out as a consulting company in 1982 and moved into doing remediation activities in 1984.

Karches started working with Southwest Hazard Control as the secretary and did some accounting while she was in college in 1982. She also cleaned the office, worked on jobsites on an Indian reservation and did lab work. "Jack of all trades," she called herself.

The biggest challenge for her when starting out was other people's lack of confidence in her. "When you're younger, people assume you're not qualified," Karches said. "But I never believed it."

Karches became president of the company about 15 years ago.

About 10 years ago, it started to feel like she had made it, she said. "It felt like the revenue was up to where we didn't have to worry, and I had confidence."

The Maids, one of Tucson's most well-known maid services, has been open since 1986.

Suzanne Faustlin bought the Tucson franchise about 15 years ago with her husband, and is president of the company.

The sluggish economy has been Faustlin's biggest challenge.

"We were at a double digit growth rate until four years ago - now we are single digit. But, we're still growing," Faustlin said.

She attributes that growth to being bold and coming up with unique opportunities.

"We wanted to keep everybody employed," she said. "We did that and continued to grow."

When the Faustlins bought The Maids, there were 13 employees. That number has gone up to 47.

That's not the only thing to grow. "We grew in revenue seven times over the last 15 years," Faustlin said.

Paying it forward is important to Faustlin, so her company participates in the Cleaning For a Reason program by donating cleaning services to women undergoing treatment for cancer.

There are three aspects to DK Advocates, said its president, Dot Kret.

The main part is helping people become employable. The company provides services such as job training, transportation, counseling and job-skills training to people who are unemployed, have limited work experience or find it difficult to qualify for work.

The second part is Archive Advantage, which offers data-transfer services, such as scanning and digitizing items like documents, photos or video.

Archive Advantage also is used to train people in the craft of scanning and digitizing, to give them a skill set to find work.

The third is forensic rehab, which offers expert testimony in legal cases.

Inspiration to start the business came from watching a friend's physical condition deteriorate from muscular dystrophy.

Kret said watching him taught her three lessons: "That the most painful and handicapping of any condition is the reaction of others. That so much of who we are is what we do. And everyone can contribute - sometimes it just takes creativity and a willingness to give someone a chance."

Kret wanted to help others have a chance. She started the company 28 years ago.

DK Advocates has offices in Tucson and Phoenix and employs 27 people. The company hit the over-$1 million mark in the early 1990s.

Kret said the company's worst year was 2010, when, due to federal budget cuts, it lost grant funding to help military veterans with disabilities find jobs. "We had to call about 500 vets and cut them loose. … It was rough - heartbreaking."

The company lost 26 percent of its annual budget and nine employees during that time.

"But, we stuck together," Kret said. "We didn't have to lay anybody off. Instead, we helped find them jobs."

LeCroy & Milligan is a research, evaluation and training firm.

"We do research studies to help organizations see if their services are effective," said Kerry Milligan, the company's president and co-founder.

Milligan felt that starting the business in 1991 was good timing. "We hit at a lucky time because the government was paying more attention to where grant money went," and in turn sought out her company's services, she said.

The company grew quickly, gaining 17 employees in a summer, Milligan said. It then grew to 35, but shrank by half in 2009 due to government budget cuts.

The company currently has 16 employees.

"We have been in the black every year," Milligan said. "We never had any debt and have been totally self supporting."

Milligan credits the company's success to being cautious and yet also having the guts to jump in.

"Our vision was never to be huge - just to do the good work."

We asked six successful Tucson businesswomen for one piece of advice they'd give to somebody starting out. Here's what they had to say:

Tucson chapter chair of the Women Presidents' Organization: "Reach out to other business owners, especially if you are unsure. Don't be afraid to be unsure, because we all are."

President of Southwest Hazard Control: "Keep an open mind. If opportunity presents itself, jump on it."

Co-owner of The Maids: "Be bold. Be flexible. Be a visionary."

President of DK Advocates: "Get involved and give back. Be a good corporate citizen."

Owner of Kuumba Made: "Follow your passion. Go for it."

President of LeCroy & Milligan: "Find mentors early on. You can't wait until you're president to get help. Believe in the abundance. It will come to you if you trust it will - and you do have to work really hard for it.

Danae Lynn Goodman fills one ounce bottles of Black Coconut Fragrance Oil at Kuumba Made, a body botanical manufacturing business, 410 E. Fort Lowell, on Wednesday, June 5, 2013 in Tucson, AZ. The company ships more than 300,000 of the 1 ounce bottles a year.