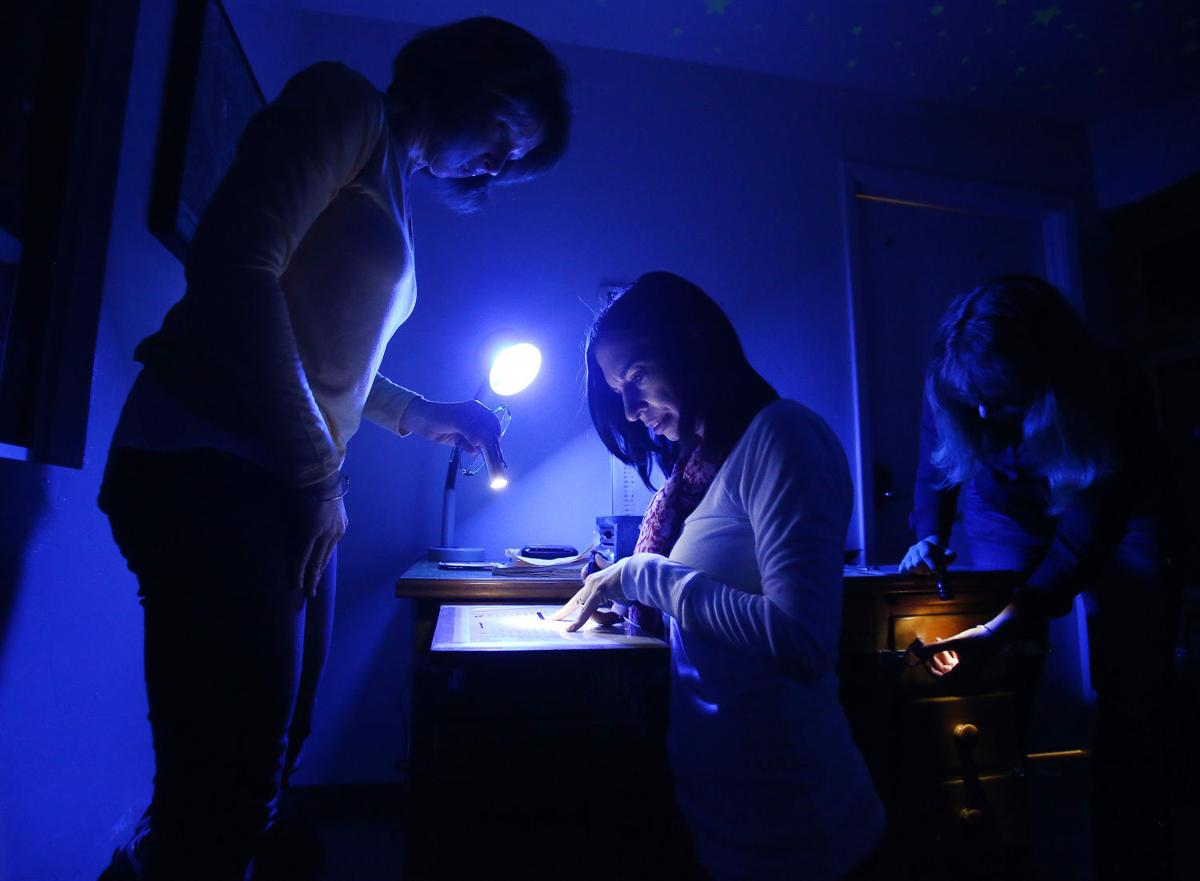 Loren Carruth, left, and Nikki Sonnleitner try to decipher a clue in the “Area 51” escape room at Escape Room Tucson, 3542 N Geronimo Ave. Teams of 2-15 use clues inside a room to crack a series of puzzles and hints, find the key and get out. 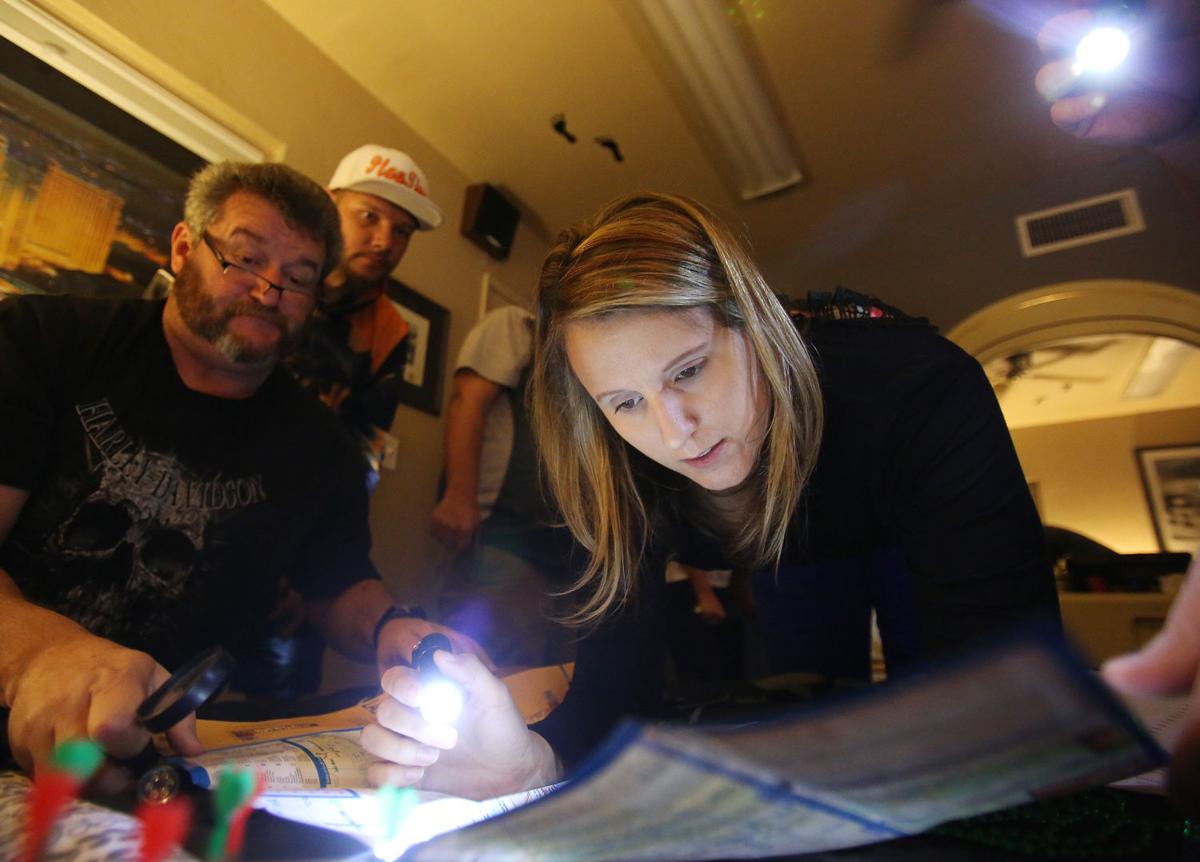 Kimi Gilbertson tries to decipher a clue on a road map with her family, from left, James Aiken and Darrell Foxhoven, in the “Hangover” escape room at Escape Room Tucson, 3542 N Geronimo Ave. 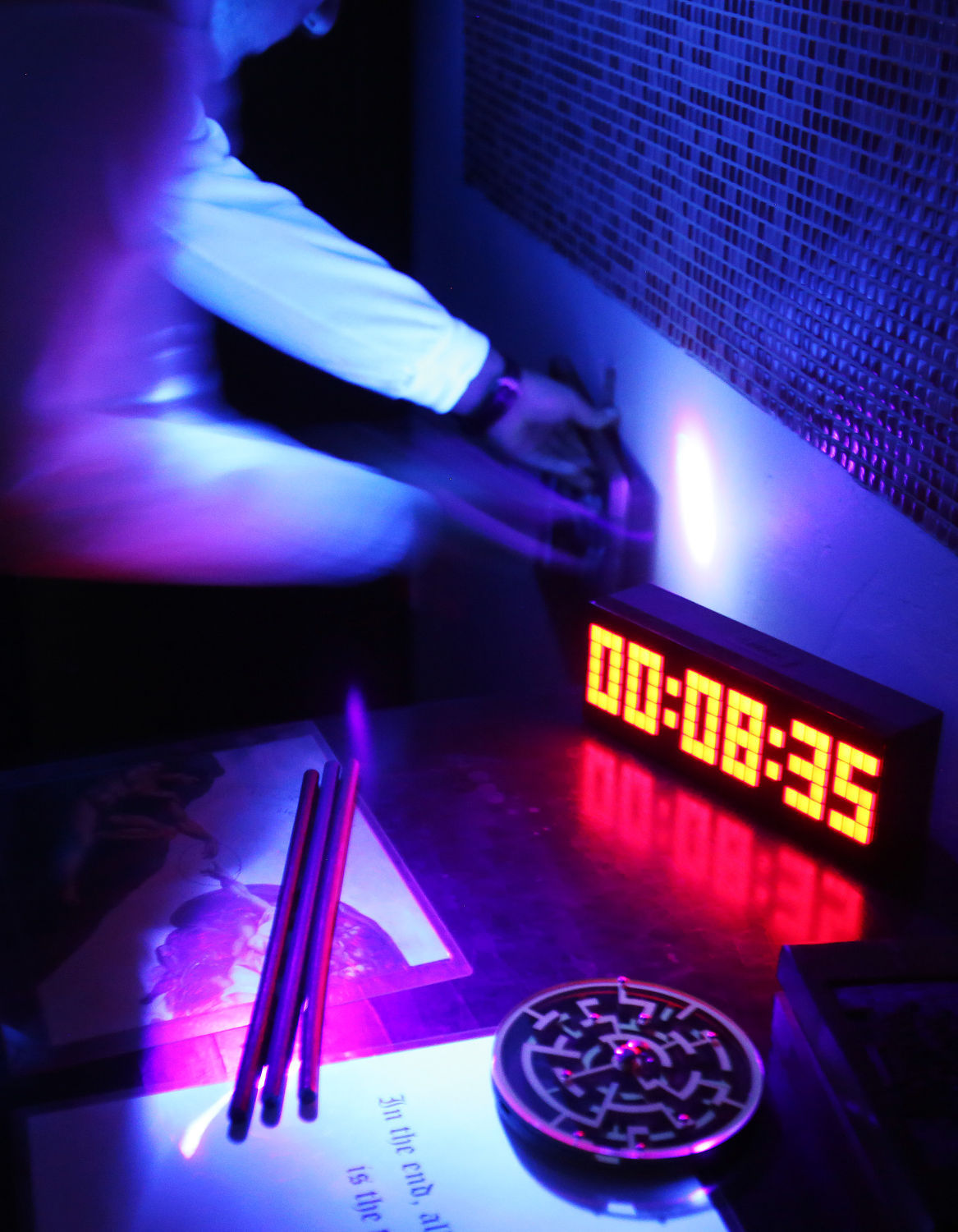 A participant in “DaVinci’s Office” races the clock to figure out the clues at Escape Room Tucson. 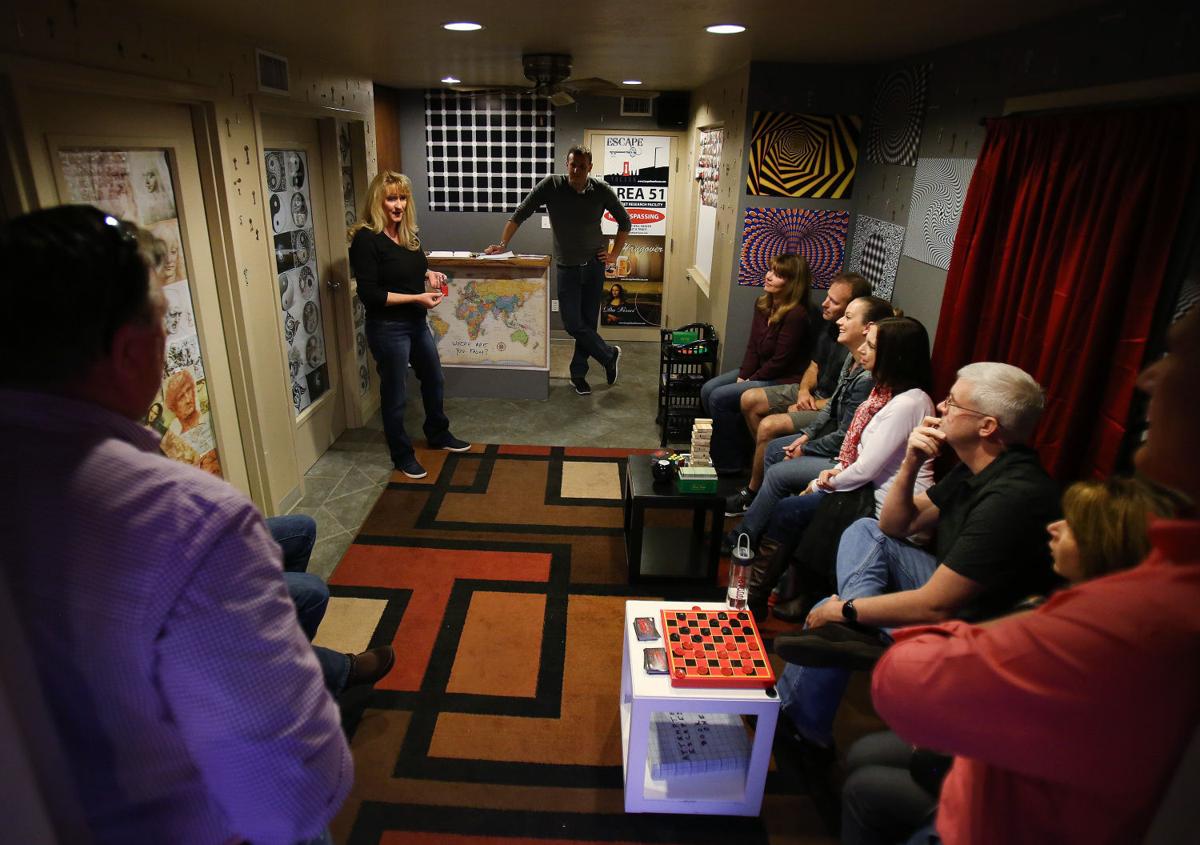 The room is dark, and as the timer by the wall counts down to zero, it feels like it’s getting darker. It’s definitely getting hotter, right? Your team’s resolve teeters on the edge. It would be so easy to give up. So easy to just walk away and laugh about it later.

But in the clutch, you all pull together. What did that clue say? What did those numbers mean? Why didn’t you see it before? You crack the code. You open the lock. You beat the room.

Is there such a thing as puzzle-solver’s high?

“You are put into this room and there are clues and puzzles and codes and things that you need to figure out,” said Nicolette Cusick of Will You Escape?. “You’re solving a murder, you’re foiling a terrorist attack or you’re defusing a bomb. There are all kinds of different themes.”

Cusick went through an escape room in Nashville and decided she wanted to bring the experience to Tucson. She opened Will You Escape? almost a year ago and has been busy since.

AJ Hughes, owner of Escape Room Tucson, said the name of the game doesn’t just refer to trying to get out of a puzzle room.

“You get to escape from the world for one hour. You’re totally immersed into fun — no cell phones, no responsibilities, nothing. You’re just focused on playing,” she said.

Hughes, who opened her business last August, said she was on vacation when she met several people from other countries who were traveling around the world doing escape rooms.

“I thought, ‘There might be something to this,’” she said.

Escape rooms, which first came to the United States in 2012, originated in Japan in about 2010 and quickly spread. According to Escape Room Directory there are more than 3,000 rooms across more than 615 cities in 63 countries.

Brad Gilbertson was looking for something unique to do for his birthday. He and his family visited Escape Room Tucson last weekend.

“When you look at the time, the time gets you, then you start panicking and really rushing,” he said. “Working as a team was the hardest part but everyone played a role.”

He would definitely be back, he said.

Participants are asked to arrive early so they can listen to tips, do’s and don’ts, best ways to approach the puzzles and a warning or two about difficulty.

“We explain to them beforehand that escape rooms are hard,” said Michelle Dixon, co-owner of Great Escape Tucson. “We try to tell them up front not to feel bad if they don’t pass; it’ll just give you experience for the next room that you do.”

Owners said that once participants are inside the room they try to interact with them as little as possible, but all offer a set number of clues during the game in case players get really stuck.

Difficulty also varies between available scenarios, so players can take it easy on themselves or face a strong challenge. Still, more people run out of time before they solve the final puzzle than those that make it out, owners said, but that’s part of the game.

“We’re in a day and age that for participation you get a trophy, but that’s not always the case in real life,” Hughes said. “Sometimes people are disappointed, but sometimes it makes them more curious to come back and try it again.”

Cusick said there’s a balance, so that even if you don’t solve the room, you still have fun.

“I’ve done escape rooms before where you don’t escape and you’re feeling dumb the entire time. I don’t like that. I just want everybody to have a good time,” she said. “It’s all about the design of the room.”

All of the scenarios in the escape rooms in Tucson were created by their owners, which isn’t easy, they said. The process can take several months.

Ideally you have to design a room that different group sizes can solve, that is challenging enough to take at least 50 minutes to crack and that doesn’t bottleneck and discourage players for too long, owners said.

Patrick Casey, who recently visited Great Escape Tucson as part of a teambuilding exercise, said he would recommend it to any group, even if it was a little intense.

“At one point I just sat down on the floor and told them to keep going before getting back to it,” he said. “It was a lot of fun and you got to work together.”

Working as a team is critical inside escape rooms, owners said, where there is nowhere to hide and groups must balance out their members’ personalities.

“Kids do a lot better than adults. Adults overcomplicate everything, try to make things too difficult,” she said.

Dixon opened Great Escape Tucson with her best friend Teresa Watterson in October. At first business was slow, she said, but once they offered a Groupon promotion in December, they’ve been booked solid.

Hughes at Escape Room Tucson and Cusick at Will You Escape? said they have relied on word of mouth and social media to promote their businesses, which attract locals and visitors during evening hours and corporate clients during the day.

Cusick quit her day job in sales in October and is currently in Colorado, where she is opening a second location, and Hughes said she is already considering moving to a larger building to satisfy demand.

All have plans to swap out existing room scenarios to keep the experience fresh and attract repeat customers.

So far, all three seem to be doing well, and as long as people love playing games there’s room for all of them in Tucson, Hughes said.

“I don’t view it as competition; I think we complement each other. We all have different experiences; all of us have different themes,” she said. “It’s good that we can be in an industry that works well with each other.”

Dates and times vary. Call or visit the websites to buy tickets or schedule an event.

Ron Bar-Tor, one of the game masters at Escape Room Tucson, said he can tell within the first few minutes if a group is going to get out of a room or not. “All of the rooms are built on communication and teamwork,” he said. He offered a few tips to make it easier for new players:

* Devise a strategy and stick to it.

* Communicate. Talk to each other.

* Don’t try to force a solution on a problem.

New downtown store also wants to be a place where a variety of people can monetize their talents in the new economy.

Teams race the clock while trying to decipher the clues and escape several themed rooms.

Players of Amtgard, a battle game with role-playing elements, have fun in the Shire of Obsidian Gate, aka Tucson, every Sunday.

Loren Carruth, left, and Nikki Sonnleitner try to decipher a clue in the “Area 51” escape room at Escape Room Tucson, 3542 N Geronimo Ave. Teams of 2-15 use clues inside a room to crack a series of puzzles and hints, find the key and get out.

Kimi Gilbertson tries to decipher a clue on a road map with her family, from left, James Aiken and Darrell Foxhoven, in the “Hangover” escape room at Escape Room Tucson, 3542 N Geronimo Ave.

A participant in “DaVinci’s Office” races the clock to figure out the clues at Escape Room Tucson.