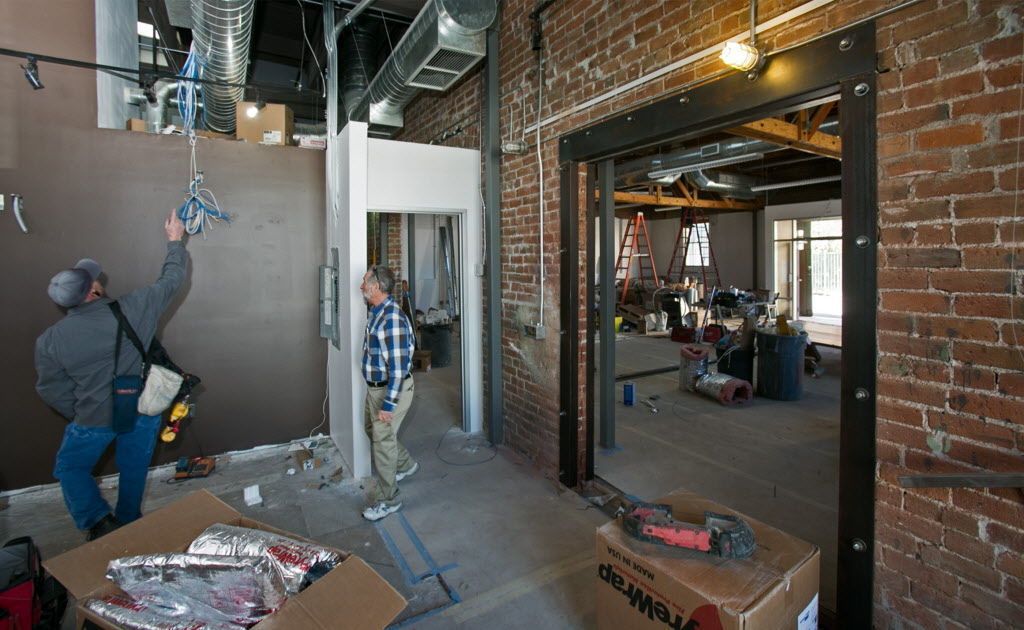 Chef Janos Wilder, right, gets an update on the communication lines running through his new event space, The Carriage House, 146 E. Broadway. The venue will be used for private parties, cooking classes and other activities. 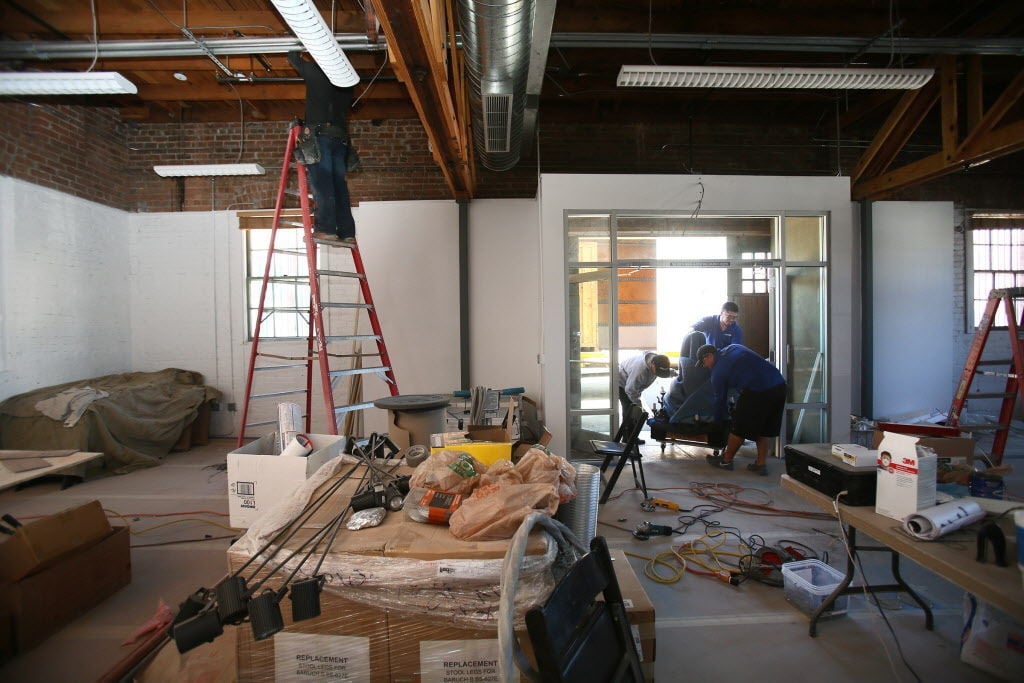 The Carriage House hosts cooking classes and serves as an events center. 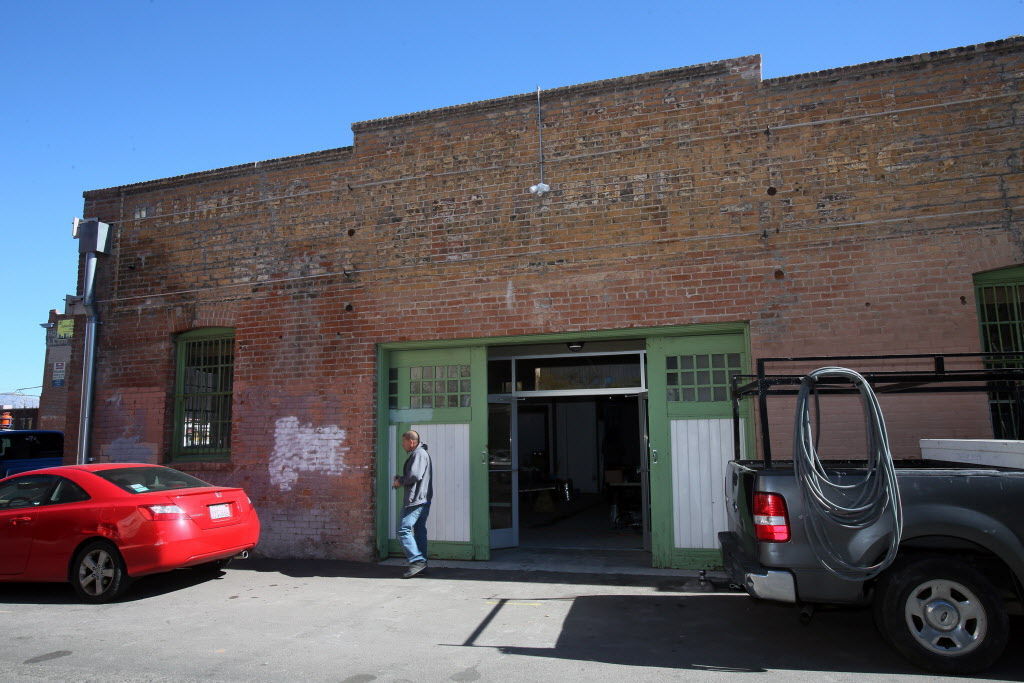 Two new event spaces are opening downtown over the next two months, both building upon established restaurants and offering their clients menus prepared by their well-known chefs.

Located at 146 E. Broadway, The Carriage House is Janos Wilder‘s latest venture, and is literally steps away from Downtown Kitchen + Cocktails, the restaurant he opened in 2010.

The award-winning chef said he had been looking for the perfect space to open his new business almost as soon as the restaurant opened.

“There’s a need for more beautiful space of this sort downtown,” he said.

The Carriage House will not only offer room for private events, it will also host cooking classes by Wilder and other local chefs, mixology classes, pop up dinners and other public functions.

Visually, the space features brick walls, high ceilings, sky lights and will be decorated with original local art. A roster of about 60 part-time staff will handle a variety of duties during events.

While Wilder and his staff have developed a series of menus people can choose from for their events, special requests are welcomed, he said.

“The most fun we have is when they say, ‘Let’s customize the menu,’ so we’ll be doing a lot of that.”

There will be no charge for renting the space, Wilder said, because what he is offering for private events is the food and service, which can be tailored to a variety of budgets.

The Carriage House will officially launch Feb. 20 and will be available for private events soon after. The first cooking class, taught by Wilder, is scheduled for Feb. 27.

Set to open in March next to Agustín Kitchen at Mercado San Agustín, 100 S. Avenida del Convento, is The Cabinet Room.

The space holds up to 50 people but larger parties can be accommodated because the doors open into the Mercado courtyard and tables can be set up outside, said Sally Kane, partner and operating manager at Agustín Kitchen.

The different room configurations available mean the space can be used by a variety of groups.

“It could be something like a Rotary Club with a slideshow, and we’ll have equipment for that, to a much more formal event like a sixtieth anniversary party,” Kane said.

Pricing is still being determined but will vary depending on the service level required.

Coming on board in October following the departure of executive chef Ryan Clark, Kane, who is also the co-owner of The Coronet, said she and chef Erika Bostick-Esham have started to make some changes at Agustín Kitchen.

These changes, which will be enjoyed by The Cabinet Room, include charcuterie, pates and cheeses to go with a renovated wine list. There will be a series of menu options for private events, but they are just a starting point, Kane said.

The look of The Cabinet Room will be very simple, she said. She may be putting in a colonial chandelier that hung in her father’s prominent former restaurant here, The Tack Room, and she had just purchased a moveable bar made of carved wood with a granite top.

“The space is a blank slate,” Kane said. “It’s got the picturesque views of the courtyard through the windows, which will act as a large part of the ambiance, and the space, I’m sure, will grow and develop as we grow and develop with it.”

For more information about The Cabinet Room call 398-5382.

To learn more about cooking classes and events at The Carriage House or to reserve a space, see downtownkitchen.com/carriage-house or call 615-6100.

Owner of The Coronet taking over Agustín Kitchen

Tucson gets national props as a dining destination

National publications tout Tucson as foodie destination on the rise.

Chef Janos Wilder promotes Tucson's designation by UNESCO as a City of Gastronomy.

Coronet restaurant 'tells a story, inviting you in'

A Q&A with the co-owner of café in historic Coronado Hotel.

End of the line--All Souls Procession

Marchers in Sunday's procession reach the terminus along West Congress Street near the Mercado development.

Chef Janos Wilder, right, gets an update on the communication lines running through his new event space, The Carriage House, 146 E. Broadway. The venue will be used for private parties, cooking classes and other activities.

The Carriage House hosts cooking classes and serves as an events center. 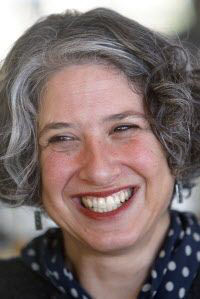