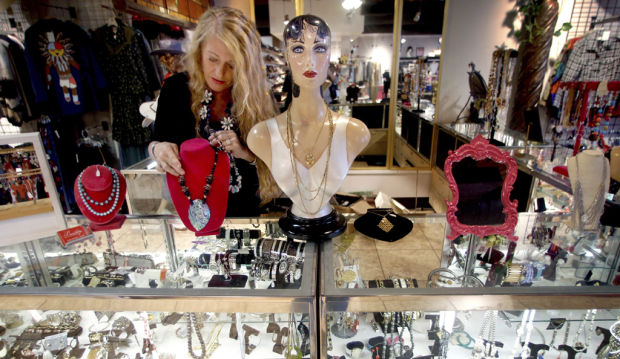 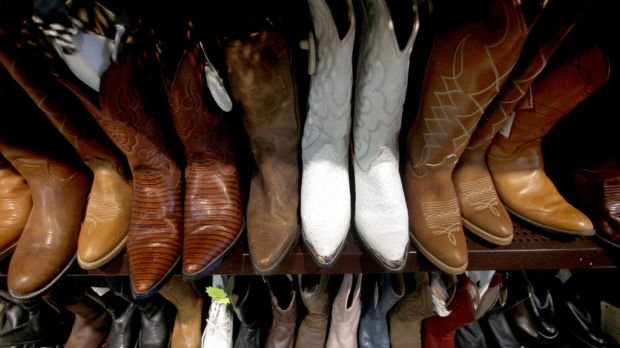 Some of the hundreds of cowgirl boots up for sale at the new location of Persnickety’s Boutique, a high-end resale boutique.

Persnickety’s Boutique, a high-end resale shop whose offerings range from cowgirl boots to evening gowns, has opened in a new location after being closed for three months.

“The other store was so crammed full of stuff, it was hard to shop,” said Monty Wallace, who co-owns the store with his wife, Debi. The couple decided they either needed to go bigger or sell the business when the lease at 6447 N. Oracle Road ended.

Debi Wallace’s passion for her work became a deciding factor. “I love it,” she said. “I love meeting people. And I just love fashion.”

So, the couple went bigger. When they found a location, they packed everything into storage, and began working on renovating the new store. “During the time that we closed the other store, until we got this store opened, we only took one day off,” Monty Wallace said.

New tile and light fixtures had to be installed. The whole building was basically gutted and turned into a large shopping space. About $130,000 was spent on renovations.

Persnickety’s sells gently used higher-end brands such as Chico’s, Gucci and Coach at discount prices. For example, Coach purses run from $29 to $129 in the store. A $60 Chico’s top would be about $12.95. “The reason we’ve been here 20 years is we have really good deals,” Wallace said. New items are sold at about half the retail price.

The store’s Western section includes a large collection of boots. “We kind of have a weird niche,” Monty Wallace said. “We have over 600 pair of new and used cowgirl boots. Mostly used ... we get people from all over looking at boots.”

Persnickety’s has a large selection of jewelry as well, Debi Wallace said. “We have a little bit of everything — from sterling silver to costume to 14 karat gold.”

Once the store’s merchandise counter opens — in about a week — customers can start bringing gently used name-brand items in to sell to the store. If the customer spends that money in-store, they get an additional 15 percent off.

Monty Wallace said competition is getting tougher because the popularity of resale is climbing in a sluggish economy.

“People can’t afford to spend the money they used to on nice things,” he said. “In our store, they come in and dress the way they used to dress for a third of the price or less. That’s the model of the business.”

Contact the store by phone at 742-4408 or online at www.persnicketysaz.com.

A grand opening sidewalk sale is scheduled to run November 11 through 16 with discounts of 75 percent off. Different items will be on sale every day.

Some of the hundreds of cowgirl boots up for sale at the new location of Persnickety’s Boutique, a high-end resale boutique.