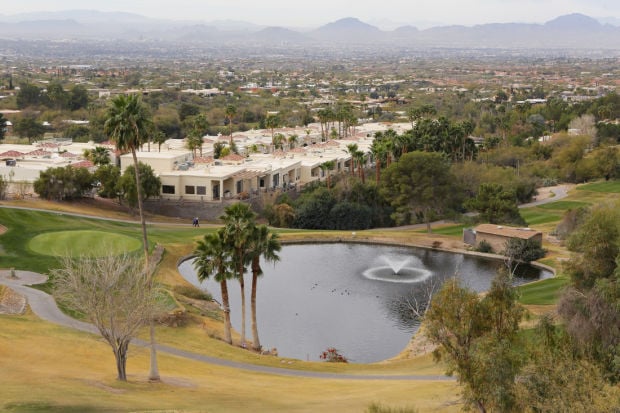 Pedestrians make their way along the sidewalk adjacent to the ninth green at Skyline Country Club, 5200 N. St Andrew’s Drive, in the Foothills north of Tucson. The club was built more than 50 years ago.

Walkers make their way along the sidewalk adjacent to the ninth green at Skyline Country Club, 5200 N. St Andrews Dr in Tucson, AZ. Beyond is one of the the surrounding neighborhoods. Skyline Country Club has fallen on hard financial times, and country club leaders are seeking support from non-members who live in the gated community surrounding the country club. Photo taken Monday, February 24, 2014. Photo by Ron Medvescek / Arizona Daily Star.﻿ 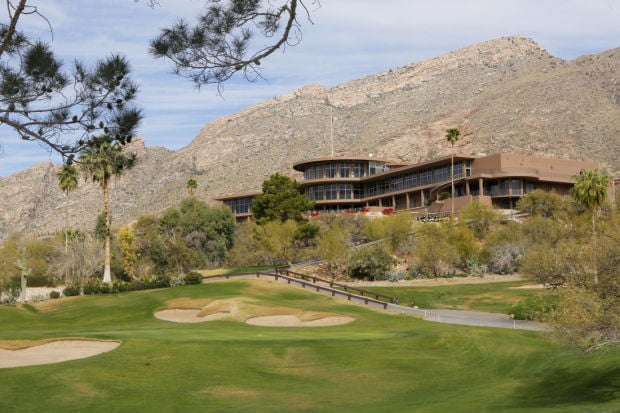 The clubhouse at Skyline Country Club is an imposing, impressive structure. Voters on the bailout plan were warned that a chain-link fence could go up around the clubhouse, sending property values plummeting.

The country club defaulted on its $3.5 million loan with Northern Trust bank last year, after losing more than one-quarter of its members since 2006, the documents show. The club has hired a third-party manager, Arnold Palmer Golf Management, to turn things around.

But the management company required the financial support of homeowners in the gated community as a precondition of its contract. Last year, club leaders organized a series of town-hall meetings, and a door-to-door and email information campaign, to persuade homeowners — whether they are country club members or not — to help them pay for the contract. An estimated 45 percent of homeowners are club members.

In December, homeowners approved the proposal to raise homeowners association annual fees for the next 25 years and to use the revenue to hire Arnold Palmer Golf Management.

“We wanted to bring in world-class management,” said country club board member and Estates homeowner Joan Sweeney﻿﻿. “A country club is a very complicated business. You have a golf course, you have fitness, you have dining — there are so many moving parts. It’s very, very difficult for clubs to be self-managed in this modern world.”

A separate voluntary fundraising campaign raised enough money to reach a settlement agreement with Northern Trust. The settlement was finalized Feb. 14, Sweeney said. She declined to provide details on the settlement amount.

Country club general manager Lonnie Lister﻿﻿ declined to comment on the situation and referred all questions to Sweeney. Lister has been general manager since late 2012.

Skyline Country Club likely would have been foreclosed on without the approval of the proposal to increase homeowners association fees, according to emails from supporters of the proposal.

The emails and a September 2013 PowerPoint presentation — provided anonymously to the Arizona Daily Star — warned homeowners that Estates property values would take a big hit if the country club closed.

About 80 percent of homeowners voted on the proposal, and 86 percent of those voted in favor, said Pam Bass﻿﻿, immediate past president of the Skyline Country Club Estates homeowners association.

In exchange for the higher fees, homeowners who aren’t country club members get access to some of the country club’s perks, like monthly dinners and — after two years — one day a month of free tennis. After three years, residents get one free round of golf each month.

Still, some residents had misgivings.

“It does appear to be a little unfair,” said country club member and homeowner Ralph Richard﻿﻿, 83, who has lived in Skyline Country Club Estates for 10 years. Richard, who voted against the proposal, said he understands the concerns of nonmembers who feel like they’re being asked to bail out a private club.

“There’s a significant number of people out there that are not members of the club, and they’re really not interested in the involvement it takes to get the club back upright again,” he said. Richard said he also wasn’t clear on how Arnold Palmer plans to fix the country club.

But longtime resident and club member Robert Morken﻿﻿ said the proposal benefits both members and homeowners.

“Most people that live here realize the importance of having a healthy golf club, if you’re in a community that’s focused on golf and called Skyline Country Club” Estates, he said.

Skyline Country Club’s financial problems were related to the economic recession, Sweeney said. Around 2007, the club refinanced its debt with Northern Trust and then went on to expand its banquet facilities, renovate and update its fitness facilities and make other improvements, she said. When the recession hit, membership began to decline, cutting into revenues, she said.

Country club leaders declined to provide the latest membership or revenue figures, or comment on the figures in the PowerPoint.

Under the agreement with Arnold Palmer Golf Management, the country club will lease its assets and operations to APGM, which will have full control of the club, Sweeney said.

“They have a stellar track record of turning clubs around,” she said.

Doug Howe﻿﻿, partner with Arnold Palmer Golf Management, said a campaign to boost membership, plus create more family-centered offerings, will be crucial to improving the club. Tucsonans have more than 40 options to play golf in the area, so the country club has to offer more than that, he said.

“More people are into fitness, they’re into eating healthier, they’re into swimming. You have to provide more than just golf to attract the whole family, and that’s really our goal,” Howe said. “The future is extremely bright for Skyline Country Club, and we’re excited to be a part of it.”

The 25-year contract — which pays APGM $164,731 in the first year, rising to nearly $600,000 in Year 3 — required that homeowners’ annual fees increase by 20 percent each year for three years and remain at the heightened level for the following 22 years.

But Estates homeowner and club member Terry Evers﻿﻿, 63, said the fee increase could burden some residents who are no longer working. Evers, who voted against the proposal, said it would have been a better investment to turn the ailing club and golf course into an open green space.

“I just don’t see that golf courses are making it anywhere around the country,” she said. “If they don’t turn golf membership around, what happens then? Are they going to come back for more money?”

Estimates showed a park conversion would have been cost-prohibitive, Sweeney said.

“We own 80 acres. It would have cost the residents more than what it would cost to keep the club open and operating,” she said.

On top of that, the loss of the clubhouse, an iconic building, would have been a loss to the greater Tucson community, Sweeney said. Built in 1962, the club was for years a gathering place for celebrities such as Frank Sinatra and Mickey Mantle, she said.

“There’s just nothing like it in the Southwest,” she said.

Some Estates residents say high-pressure tactics played on residents’ fears in the months leading up to the vote.

Nearly 1,500 U.S. golf courses have closed since 2001, and 70 percent of them have not been repurposed, warns an information packet provided to homeowners along with their ballot and instructions on how to vote on the proposed agreement with Arnold Palmer Golf Management.

Arnold Palmer Golf Management’s research shows that home values declined by 20 percent to 30 percent in neighborhoods where a club and golf course have closed, the packet said.

Sweeney said club board members asked a local Realtor from outside the country club community to email residents with her take on Estates property values.

“Do not let your beautiful green neighborhood perish,” wrote Robin Sue Kaiserman﻿﻿, vice president with Long Realty in Tucson, in an email to homeowners. “I advise you from a business standpoint to vote yes on all ballot items. Save Skyline Country Club, save Skyline Country Club Estates and save your own property values,” Kaiserman wrote.

Evers — the country club member who voted against the proposal — says she doubts property values would have been permanently hurt. Golf isn’t the main reason people buy homes in Skyline, she said.

“They come to Skyline because of the location, the 24-hour guard gate, the natural setting and beauty of the place, and its proximity to town is wonderful,” she said.

Estates homeowner Pamela Barr﻿﻿, who is not a country club member, said she voted in favor of the proposal.

An informational meeting on the proposal “was not heavy-handed at all,” she said. “They’re trying to give the neighborhood access to the country club, so we can see how it would benefit us even more.”

Sweeney said the campaign wasn’t meant to pressure homeowners but to fully disclose the effects of closure.

“I don’t call that high-pressure — I call that good information. When you’re going to vote on something that impacts a community, you need to have all the facts on the table,” she said.

Gov. Doug Ducey has signed one HOA bill into law. One awaits his signature.

Pedestrians make their way along the sidewalk adjacent to the ninth green at Skyline Country Club, 5200 N. St Andrew’s Drive, in the Foothills north of Tucson. The club was built more than 50 years ago.

Walkers make their way along the sidewalk adjacent to the ninth green at Skyline Country Club, 5200 N. St Andrews Dr in Tucson, AZ. Beyond is one of the the surrounding neighborhoods. Skyline Country Club has fallen on hard financial times, and country club leaders are seeking support from non-members who live in the gated community surrounding the country club. Photo taken Monday, February 24, 2014. Photo by Ron Medvescek / Arizona Daily Star.﻿

The clubhouse at Skyline Country Club is an imposing, impressive structure. Voters on the bailout plan were warned that a chain-link fence could go up around the clubhouse, sending property values plummeting.