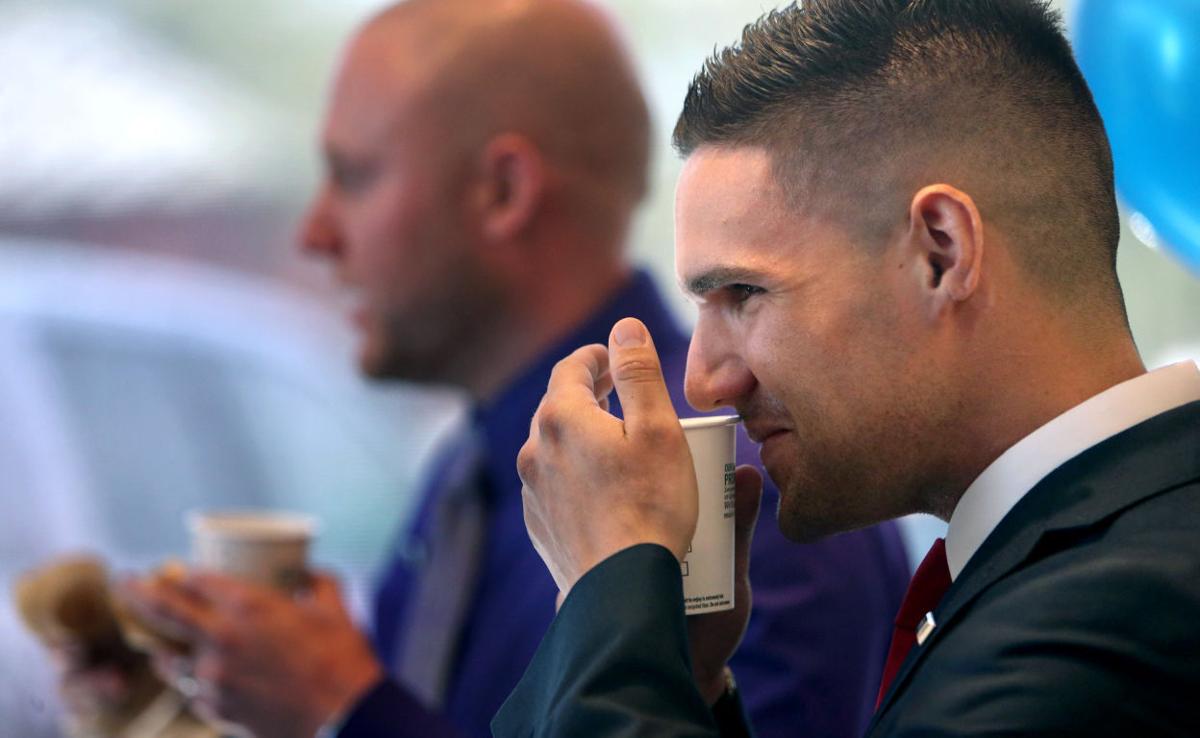 Barista Aaron Johnsen, an Army reservist, takes in the aroma of a cup of coffee, part of a Starbucks tradition, during a dedication ceremony for Tucson’s first “military family store.” 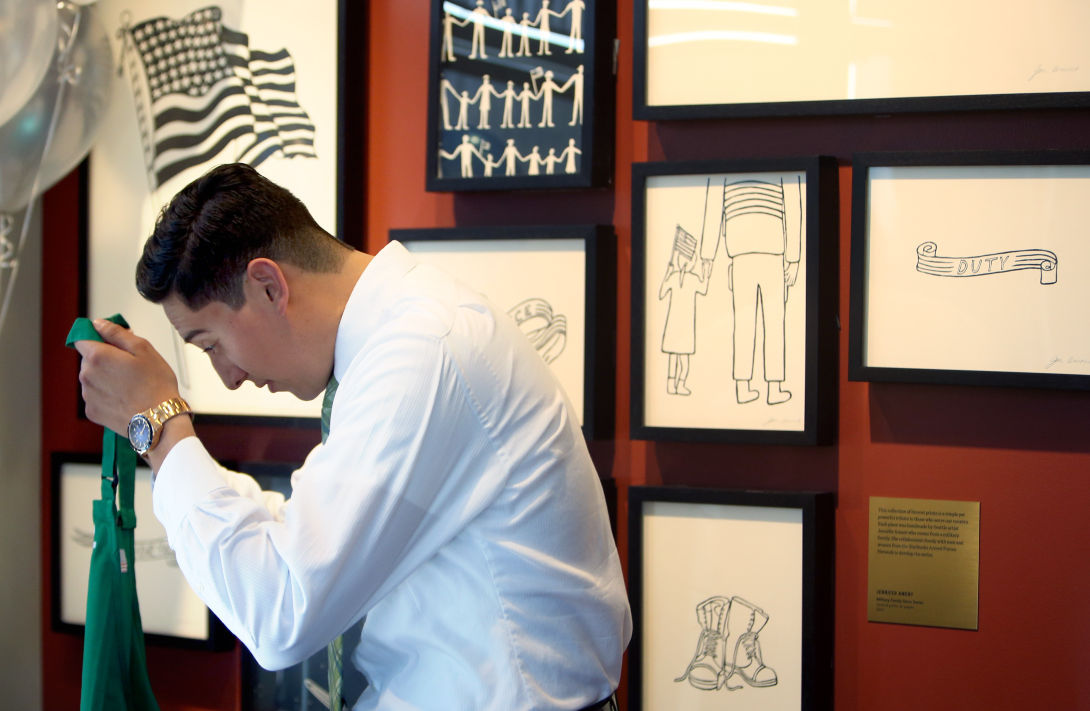 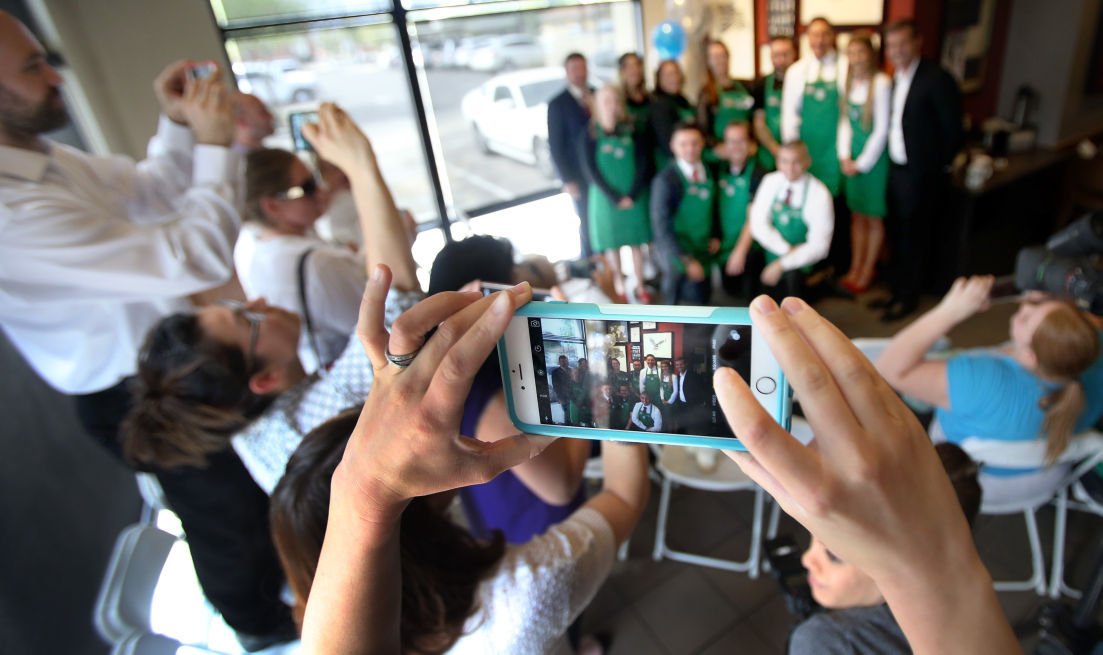 Family and friends take photos of Starbucks employees sporting special aprons at a ceremony dedicating the location to the local military community.

In between menu items touting latte macchiatos and spicy sandwiches, a sign hanging in a local Starbucks tells customers that the store is now part of the Davis-Monthan community.

Starbucks dedicated Tucson’s first “military family store” to the Air Force base during a ceremony Wednesday afternoon at the store on the corner of Campbell and Broadway. The store, one of 20 such Starbucks across the country, focuses on hiring veterans and military spouses.

Starbucks employee Tara Santos’ husband was in the Marine Corps for four years, and the company has helped her keep her job through the process.

“I’ve been moving from different states with my husband as he transitioned out of the military and I’ve been able to transfer my job with Starbucks and move,” she said.

The stores are a “great opportunity to bring together the friends and family of military veterans,” Santos said, noting veterans and their loved ones need places outside of the military community or base where they feel welcomed.

The store features artwork inspired by the Air Force, such as a flying bald eagle. The veterans and military spouses who work at the store wear aprons emblazoned with a U.S. flag.

“They’re very understanding of what goes along with a military commitment,” said Aaron Johnsen, a barista at the store and an Army reservist.

Johnsen frequently has to leave for training as part of his duties with the 335th Signal Command, a cyber warfare unit based in Phoenix, he said.

Starbucks often pays him during his training periods and doesn’t dock him when he has to leave on short notice, he said.

Danny Guevara served in the Army for five years and has been a manager of the store for six months.

“I came to Starbucks to pursue something outside of (the military), to go to school, and I fell in love with it,” Guevara said.

Base has room for growth and a bright future, she says.

Military spouses have an unemployment rate of up to 18 percent.

About 70 service members and veterans showed up for a job fair hosted by Pima Community College Wednesday morning. Video by Curt Prendergast/A…

Toby Van Skike was wounded while serving in the U.S. Army during the Vietnam War. He never forgot the nurse who cared for him at the 71st Evac…

Barista Aaron Johnsen, an Army reservist, takes in the aroma of a cup of coffee, part of a Starbucks tradition, during a dedication ceremony for Tucson’s first “military family store.”

Family and friends take photos of Starbucks employees sporting special aprons at a ceremony dedicating the location to the local military community.