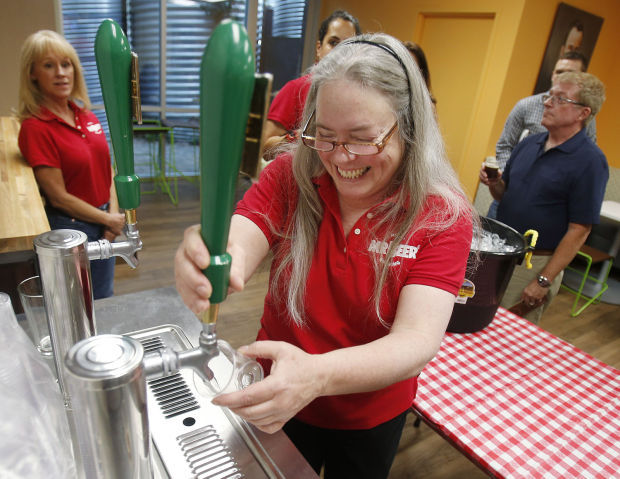 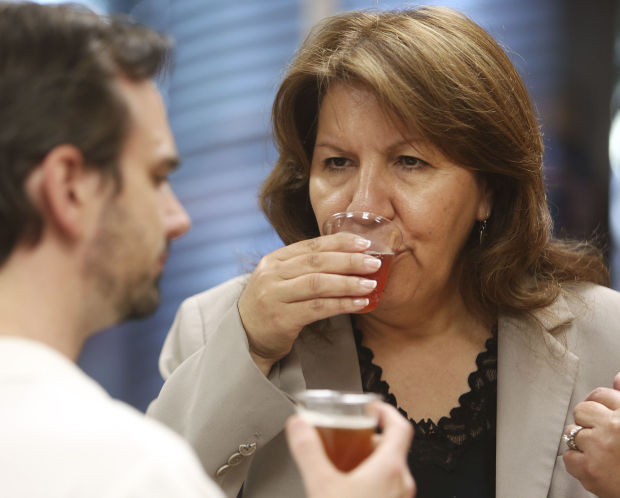 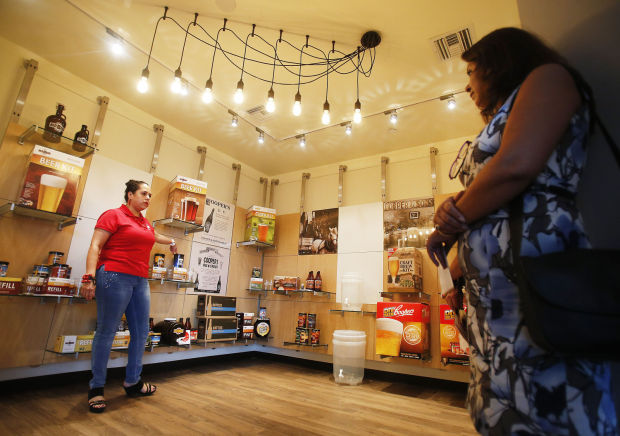 Customer service representative Judy Ramos shows off the showroom of home brew items for sale to Ana Brooke with the Tucson Hispanic Chamber of Commerce during an open house at the new headquarters for the home brewing company Mr. Beer, 3366 N. Dodge Blvd., on Thursday, Aug. 21, 2014.

A Tucson home-brewing kit maker has been expanding like a head of foam since its acquisition by Australian brewing giant Coopers Brewery in 2012.

Coopers DIY LLC, which does business as Mr. Beer, toasted its expanded local headquarters during an invite-only open house Thursday evening at the facility, at 3366 N. Dodge Blvd.

The new location gives the company room to grow and add some shipping to a local operation that up to now has consisted of administrative offices, said Rick Zich, president of Mr. Beer.

That bigger space was needed, as the company grew its local staff to 20 workers from 14 before the 2012 acquisition by Coopers, he said.

Zich said the acquisition was a boon both to Mr. Beer, which has been selling small beer-making kits to the North American market since its inception in the mid-1990s, and to Coopers, a major global supplier of malt extracts for brewing and food flavoring and the biggest Australian-owned brewery.

Mr. Beer was founded in 1993 in Dallas and was moved to Tucson in 1999 when local businessman Michael Bernstein, part owner in Internet and networking providers Simply Bits and Nextrio, bought the company with a partner.

“It was just a real beneficial fit for both companies — they got into the North American marketplace, and we got into a worldwide marketplace we were just dabbling in,” said Zich, who was chief financial officer of Mr. Beer owner Catalina Products before the sale to Coopers.

Since the merger, Mr. Beer has switched to Cooper malt extracts, which are made with Austrialian barley, and expanded its offerings. Sold online at www.mrbeer.com and in stores including Target, Kmart, Total Wine & More, Bevmo and some Walmarts, Mr. Beer kits generally are aimed at novice homebrewers and make 2-gallon batches with kits including small food-grade plastic kegs or bottles.

Mr. Beer’s main warehouse is in Wisconsin, partly because of the cooler weather and proximity to Mr. Beer’s major markets in the East, Zich said, adding that about 250,000 Mr. Beer kits were shipped last year.

But Zich said the company recently finished a warehouse area at the Tucson facility that will allow the company to serve Western retail markets more efficiently with Mr. Beer, Mr. Root Beer and DIY Beer products.

“We definitely want to be more out in the community here, and maybe offer some tastings as well, but there are some laws you need to abide by,” he said.

Customer service representative Judy Ramos shows off the showroom of home brew items for sale to Ana Brooke with the Tucson Hispanic Chamber of Commerce during an open house at the new headquarters for the home brewing company Mr. Beer, 3366 N. Dodge Blvd., on Thursday, Aug. 21, 2014.