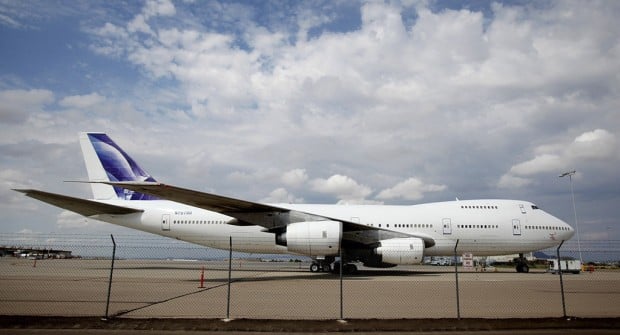 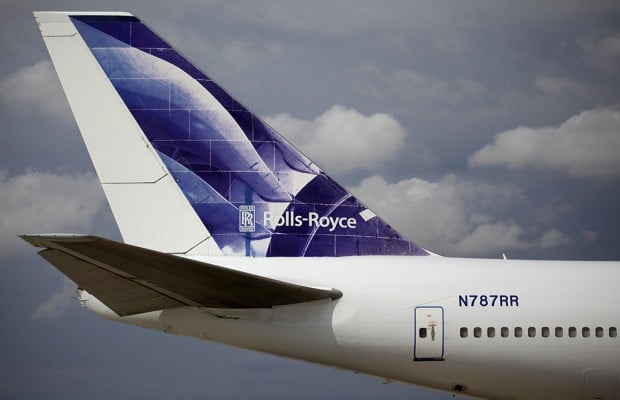 An airplane with Rolls-Royce on its tail is an unusual sight here.

It's not every day you see a Boeing 747 jumbo jet in Tucson, much less a Rolls-Royce.

Yet there it is at Tucson International Airport, a gleaming white 747 with its tail painted in the livery of aircraft engine maker Rolls-Royce PLC.

The modified 747 isn't taking on any jet-setting passengers, though.

The plane is Rolls-Royce's "flying test bed," here as part of a project with Raytheon Technical Services to test a jet engine designed for the Boeing 787 Dreamliner, the aircraft maker's fuel-efficient, next-generation plane.

London-based Rolls-Royce is testing its Trent 1000 engine with Raytheon at TIA, officials of Rolls-Royce and Raytheon confirmed.

The Trent 1000 is one of two engines Boeing offers on the 787; the other is the General Electric GEnx. Rolls also makes a version called the Trent XWB for the Airbus A350 XWB, rival to the Boeing 787.

The Trent 1000 powered the Boeing 787 on its maiden flight in 2009 and on its first commercial flight last October, from Narita, Japan, to Hong Kong via All Nippon Airways.

Last week at the Farnborough International Airshow near London, Rolls-Royce unveiled the Trent 1000-TEN, an advanced version incorporating technology from the Trent XWB.

Rolls says the Trent 1000-TEN (Thrust, Efficiency and New technology) will boost fuel economy by up to 3 percent compared with the Trent 1000s in service today. Built mostly with lightweight composite materials, the 787 burns about 20 percent less fuel than the similar-sized Boeing 767.

Rolls-Royce spokeswoman Ginny Person confirmed the Trent 1000 test work is being performed at TIA and said further details about the program may be released in the near future.

"We're going to be doing some testing, and we should have an official flight test in the upcoming months," Cleary said.

To test the engine, it's installed on the jumbo jet's wing in place of one of its four regular engines, despite the Trent's larger size.

Such test-bed planes are typically stuffed with all kinds of electronics to gather and process test data.

"They're able to kind of trick the engine into thinking that it's on a 787," Cleary said, adding that a Trent 1000 test engine hasn't yet arrived.

A TIA official said the airport attracted Rolls' engine-testing program because it had facilities immediately available that met the company's requirements, including apron parking and ease of access.

News of Rolls-Royce's local engine-testing program comes after the company said last month it was opening a facility in Guaymas, Sonora. Rolls-Royce is setting up shop in a Guaymas industrial park owned by Tucson-based The Offshore Group to develop a supply hub for commercial jets and military aircraft around the globe.

Rolls-Royce's engine-testing project isn't the only Dreamliner-related work going on in Tucson.

Tucson-based Securaplane Technologies, which was acquired last year by Meggitt PLC, has been supplying a wireless emergency lighting system for the 787.

More recently, the company has begun supplying Boeing with a "start power unit" - a kind of power inverter used to start the 787's auxiliary power unit (onboard power supply system) - as well as a charging system for the Dreamliner's main lithium battery.

Sargent Aerospace and Defense in Marana also is supplying some components for the Boeing 787.

Tucson International Airport was also the site of aircraft testing more than 50 years ago - partly thanks to the Old Pueblo's summer heat.

In July 1959, a new Boeing 707 owned by American Airlines spent four days in Tucson for testing of its air-conditioning equipment. Made from 1958 to 1979, the Boeing 707 dominated passenger air travel in the 1960s.

An airplane with Rolls-Royce on its tail is an unusual sight here.