US inflation slips from 40-year peak but remains high 8.5% 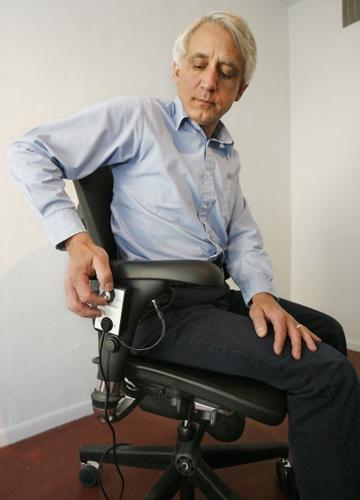 Tarek Makansi demonstrates the Temperfect office chair that has tiny semiconductor chips that act as tiny heat pumps. Users can switch from heating to cooling and set their comfort level with a dial thermostat. 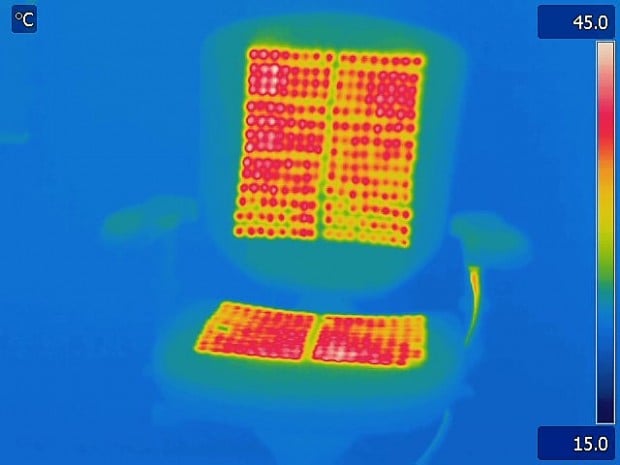 If you're reading this while working in an office, chances are pretty good that you feel too hot … or too cold.

A Tucson company has an answer, with an office chair that can heat or cool your backside with an array of tiny semiconductor chips that act as tiny heat pumps.

The company has plans to incorporate its electronic climate-control system on mattresses, automotive seats and hospital beds, Makansi said.

"We would really like to be the supplier of the component technology to add heating and cooling to surfaces," said Makansi, just back from showing off the chair at the Greenbuild 2012 environmental expo on San Francisco last week.

Founded in 2010, Tempronics is trying to commercialize its thermoelectric system technology, which by exploiting heat conversion on the microscopic level has the potential to create a whole new category of solid-state devices for cooling, heat conversion and power generation.

The company, which is backed by venture and angel capital, rolled out its Temperfect office chair in May and has sold several dozen at $1,150 each through dealers and direct via its website, tempronics.com, Makansi said.

The chair features a grid of thermoelectric chips and special conductive wiring. A controller allows users to switch from heating to cooling and to set their comfort level with a dial thermostat.

During a tryout, a Temperfect chair performed as advertised, nicely chilling when set to cool, and transitioning to heating within a few seconds of being switched. Adjusting the thermostat quickly turned the chair from toasty to lukewarm.

The company says the chair can keep its occupants at an ideal temperature, improving comfort and productivity while saving on building heating and cooling costs.

The plug-in chair uses 70 watts at its maximum cooling setting, 50 watts on high heat. A laptop charger-adapter powers the current product, though a battery-operated version is in the works, Makansi said.

The company says the chair doesn't cost much more than some high-end office chairs without the climate-control functionality. And it can quickly pay for itself by increasing productivity, eliminating the need for new thermostats, and reducing heating and cooling load especially on weekends and off hours.

A human-subject study by the Center for the Built Environment at the University of California-Berkeley showed the Temperfect chair can keep users comfortable when the room is between 61 and 84 degrees Fahrenheit.

At those thermostat settings, the chair could save more than 30 percent on buildingwide heating and cooling costs, said the study, which was commissioned by Tempronics.

That could add up to real savings, since many commercial buildings are overcooled and overheated, said David Lehrer, communications director and researcher at the Center for the Built Environment.

"We're spending a lot of money to make people too cold," Lehrer said, adding that studies have shown that overheated workers may slow down measurably on certain tasks.

While the chair offers benefits for cubicle creatures, it's just the start for Tempronics, Makansi said.

The office chairs - which Tempronics makes at a maquiladora in Agua Prieta, Sonora - are a demonstration vehicle for the company, which hopes to have its technology incorporated in chairs and other products manufactured by others, Makansi said.

The company is in talks with office-chair makers on producing the Tempronics model or building the feature into other branded chairs, Makansi said, declining to reveal the chair makers involved.

The company is pursuing that strategy in other areas.

Tempronics is under contract to develop its technology for mattresses and automotive seats, he said. He declined to identify the companies involved in those efforts, except to say they are on the Forbes Global 2000 list of the top public companies in the world.

Tempronics also is pitching the technology to integrate into hospital beds and wheelchairs, to alleviate the costly and deadly problem of bedsores.

Complications from bedsores, also known as pressure ulcers, kill an estimated 60,000 people annually at a cost estimated $12 billion annually to treat, Makansi said. Studies show that heat and perspiration are major factors in developing bed sores, and Tempronics' system could reduce both, he said.

But Tempronics is more interested in supplying the technology incorporated into manufactured products - think "Intel Inside" - rather than becoming a mass manufacturer.

In 2010, Tempronics announced a $2.7 million venture financing round led by the San Francisco-based venture firm Nth Power, which specializes in the energy sector, and including local "angel" investors.

To take the company to the next level, Tempronics is working to raise another $4 million to $5 million in a new venture-funding round, Makanski said.

How inflation is impacting the way people spend their money

How inflation is impacting the way people spend their money

Tarek Makansi demonstrates the Temperfect office chair that has tiny semiconductor chips that act as tiny heat pumps. Users can switch from heating to cooling and set their comfort level with a dial thermostat.