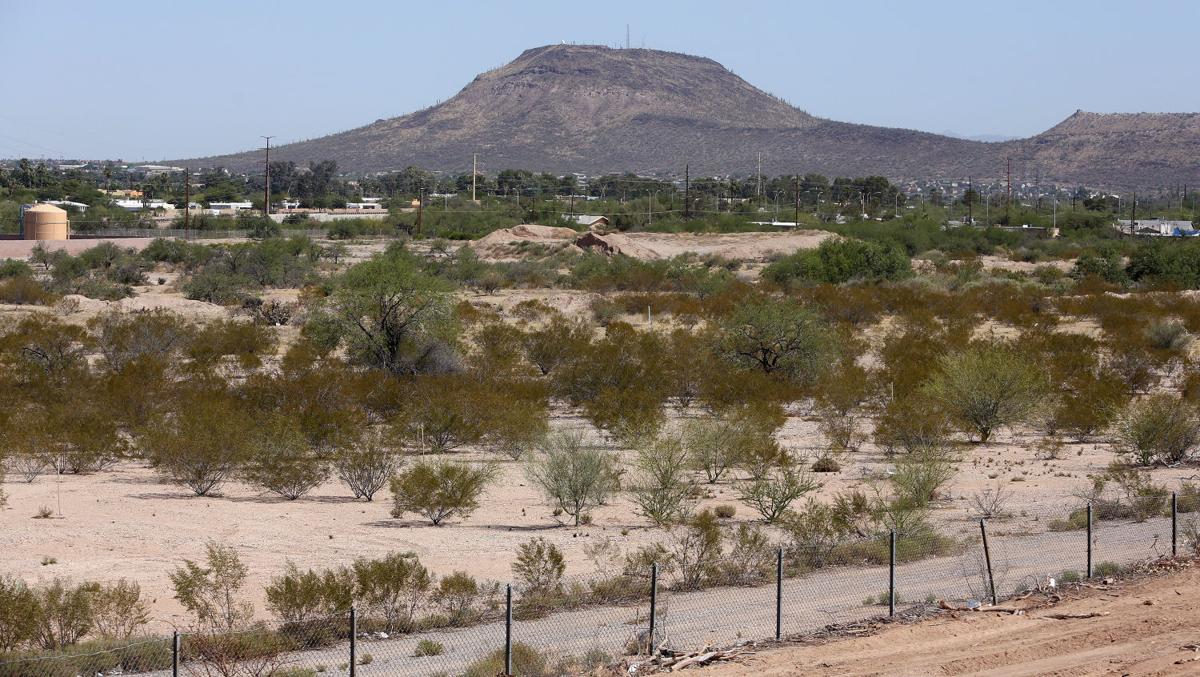 The site, on the west side of Interstate 19, is owned by the city of Tucson and used as a Tucson Water facilities yard. 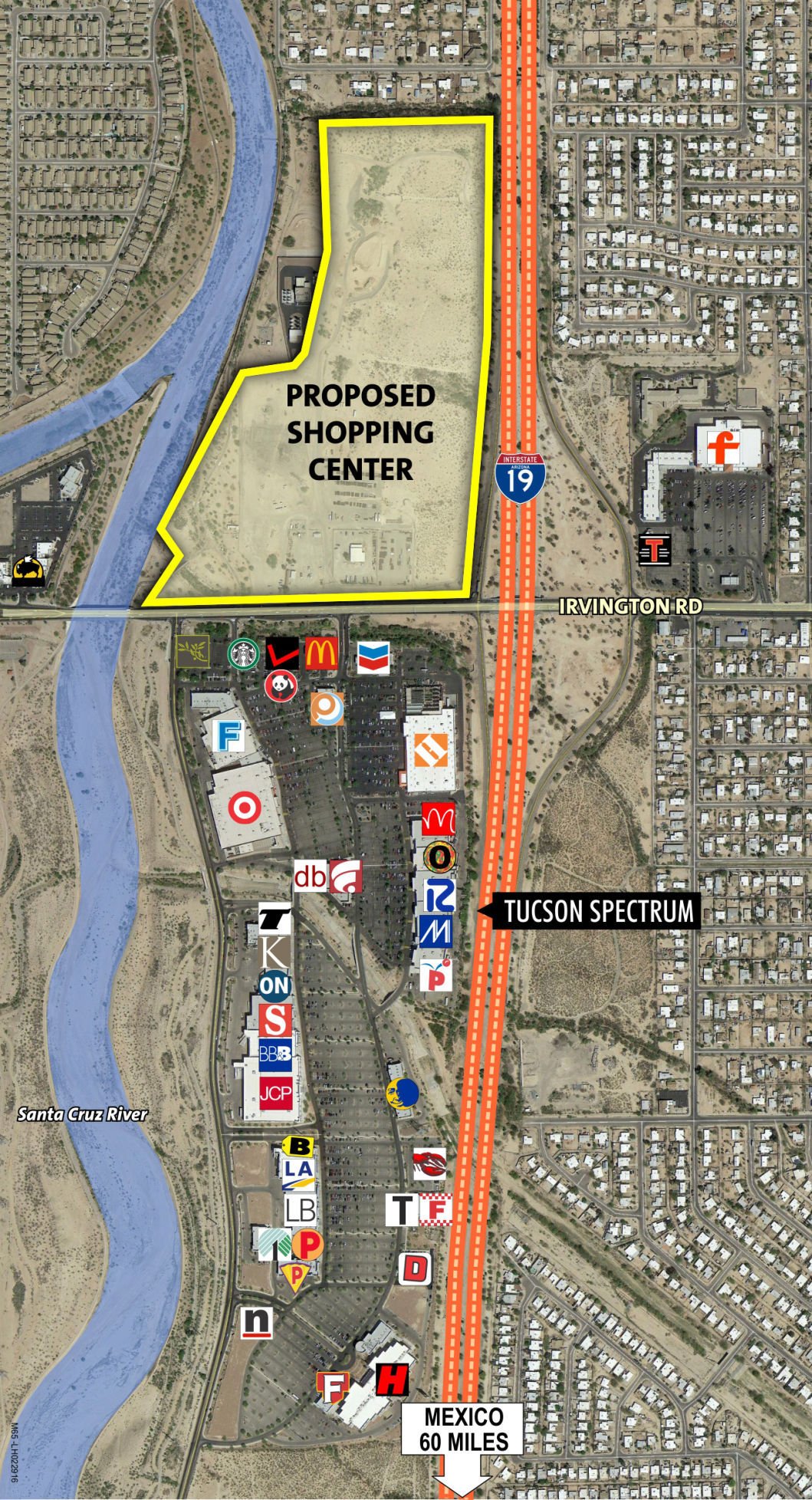 A new shopping center is proposed for the property at the northwest corner of Irvington Road and I-19.

Plans for a major shopping center and on-site hotel on the city’s southwest side are underway.

Bourn Cos. is planning the outdoor center on Irvington Road, west of Interstate 19, and is in negotiations with several retailers, restaurants and hotel chains.

The 58-acre site will be developed in phases, with about 220,000 square feet of shopping space to come online by fall of 2017, said developer Alan Tanner of Bourn.

Anchor tenants will be on the west side of the center, facing I-19.

Restaurants and retailers will dot the east and south sides, facing the interstate and Irvington Road.

The site is owned by the city of Tucson and used by Tucson Water as a facilities yard.

The City Council voted unanimously last month to rezone the parcel from residential to commercial.

A required land study is being done before the sale of the land to Bourn can close. Developers hope to buy the land at the end of the month. A sale price has not been determined.

The center’s southern neighbor, the successful Tucson Spectrum, sits on 122 acres and has more than 1 million square feet of retail space. Phase 1 was developed in 2001 and Phase 2 in 2008. Phase 1 of the property sits closest to Irvington Road and is anchored by Target and Home Depot. Phase 2 is anchored by Harkins Theatres and JC Penney.

The city placed a restriction on property that will house the new shopping center, which prohibited retail development there until March 2017 as an incentive for developers to build out Tucson Spectrum.

“When there’s need you get creative,” said City Councilwoman Regina Romero. “We often get criticized for selling land, but it’s not just any land, it’s an opportunity beyond one-time revenue for the city. This will help bring sales taxes and jobs and other investment in the area.”

She said Bourn sat down with the city staff and neighbors to hear about the needs and wants.

“It’s very cool because, in the end, we’re getting a good product,” Romero said. “It’s a great opportunity for the city of Tucson.”

Developers want the new center to build on the success of Spectrum.

An alternative to a big-box grocery store is also under consideration, at the request of residents.

“We want to complement what exists across the street and give shoppers a deeper selection,” Tanner said.

To ease traffic concerns, Bourn will widen Irvington Road and add two westbound lanes from I-19: one right-turn-only lane into the shopping center and one pass-through lane.

The Arizona Department of Transportation is also adding a third right-turn lane off of I-19 onto westbound Irvington Road.

The yet-to-be-named center will have multiple entrances and align with the traffic light at Calle Santa Cruz for access to both shopping centers.

“We’re excited to be developing an infill project with strong infrastructure around it,” Tanner said.

More than 100,000 vehicles travel that intersection every day, data from the Pima Association of Governments show.

The median age of residents in that area is 29.7 — versus 34.3, the median age in metro Tucson, according to a CBRE market overview.

Bourn was attracted to the location after conducting a study on the southwest-side trade area.

Some retailers expressed concerns that incomes in the surrounding neighborhoods were lower than in the rest of the city, Tanner said.

The success of Spectrum proved the underserved part of the city would patronize local retail sites.

“It’s dramatically under-retailed,” said Tanner. “Retailers do better because there are less choices.”

And, many retailers report their best performing Arizona stores are in the Spectrum Mall.

There are about 325,000 residents in the area around Spectrum Mall, similar to the population around Tucson Mall and Park Place.

A chain hotel, perhaps more than one, will be part of the development in a nod to the Mexican shoppers who, state tourism officials say, spend more than $1 billion a year on hotels, restaurants and shopping in Arizona.

It would be the only I-19 hotel option. Many visitors from Mexico now stay at the airport hotels or in the casinos on the city’s southwest side.

“Spectrum has done a very good job of targeting the Mexican visitors,” Tanner said, noting that it’s the first major shopping center visitors see when arriving in Tucson from the south. “We have the opportunity to get them first and get them last.”

“The proximity of this 1.1 million-square-foot regional power center along Interstate 19 allows it to pull from quite a distance with a short drive time, including the outlying communities such as Green Valley, Sahuarita, and as far away as neighboring Mexico,” she said.

“Most, if not all (of the retailers), have bilingual staff and some even have dual-language signage on the inside of the stores to make it comfortable for the Mexican nationals to come and enjoy their shopping and dining experience and spend money,” McClure said. “Those businesses who have decided to be in the Tucson Spectrum enjoy some of the strongest sales in their chains in Tucson and Arizona. It’s a great story.”

Commercial real-estate market heats up in first half of 2016

Business owner took a leap at the worst possible time

Your guide to raspados and Mexican sweet treats

It's summer in Tucson! Get your Mangoyadas straight from your Macedonias.

Tucson's far east side getting movie theater with dining option

The site will feature IMAX films, Dolby Atmos sound and more than 20 VIP lounges and auditoriums.

But an economist isn't certain that will mean a bustling Christmas for the state's retailers.

Construction taking place from south side to Marana.

The site, on the west side of Interstate 19, is owned by the city of Tucson and used as a Tucson Water facilities yard.

A new shopping center is proposed for the property at the northwest corner of Irvington Road and I-19.