Maloney’s, background left, and O’Malleys are popular Fourth Avenue bars being investigated by the state’s liquor department for violent incidents this year. 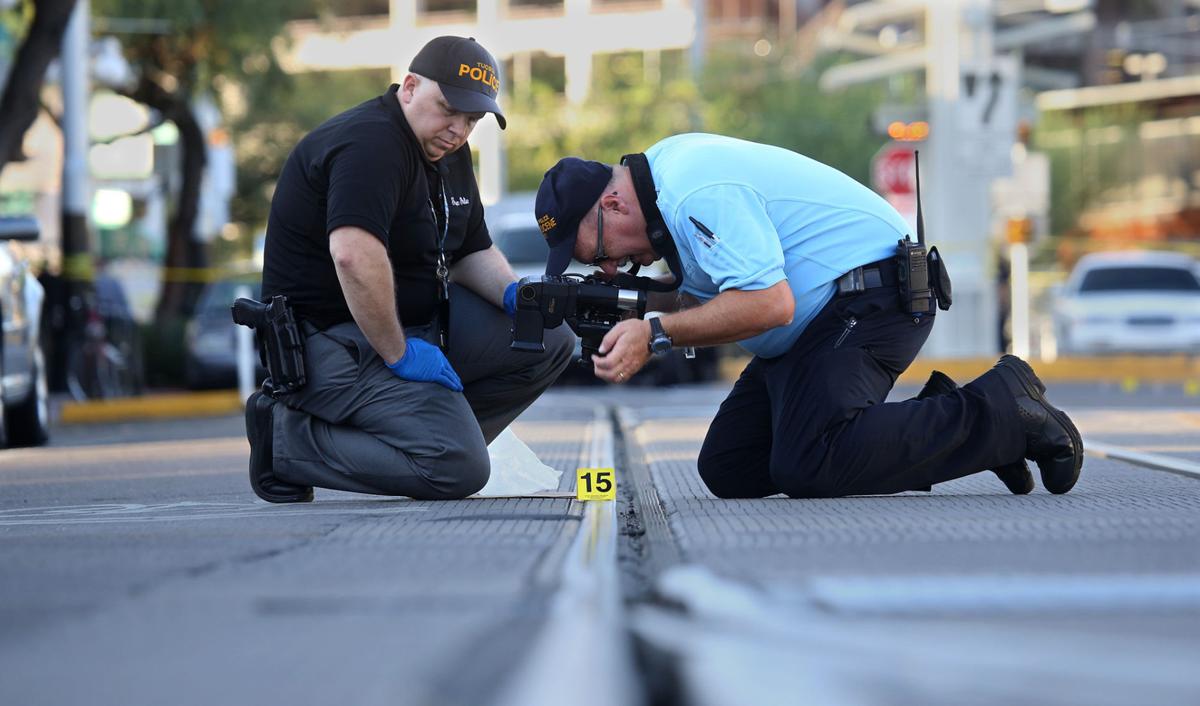 Police investigators collected evidence after a fatal drive-by shooting in front of Maloney’s in August. 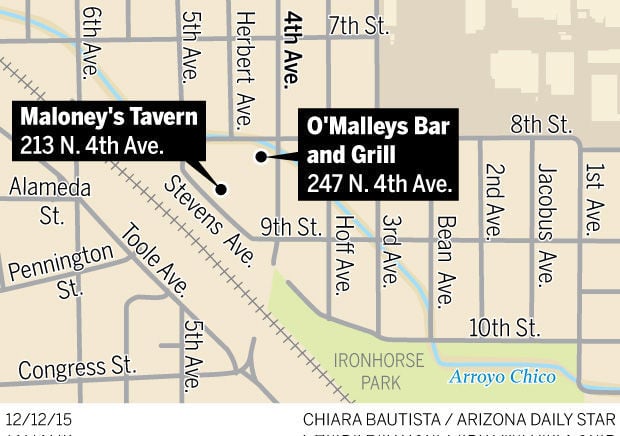 Two popular and longstanding North Fourth Avenue bars are being investigated by the state’s liquor department for violent incidents this year, including a homicide, a Star investigation revealed.

Police reports show that between February and August, a homicide, an aggravated assault and a robbery took place at Maloney’s Tavern, 213 N. Fourth Ave.

All seven of the incidents took place or started inside of the bar, police reports show.

State liquor law says that liquor license holders are required to report acts of violence that occur on the property or adjoining locations, such as the parking lot or surrounding streets, to the State of Arizona Department of Liquor law enforcement.

When contacted by the Star, department spokeswoman Lee Hill said there were no open investigations or violations for either of the bars in 2015. The Star provided the department with the police case report numbers to verify that the incidents had been reported.

If the department determines that any of the incidents violated liquor law, the affiliated bar is in danger of losing its liquor license, depending on the seriousness of the violation. In addition, if any of the incidents are ruled violations, the license holder will face repercussions for violating the mandated reporting law, Hill said.

It’s unclear from police records if the calls to law enforcement after the incidents originated from the bar or any employees, but in at least one of the incidents, police note that no calls were made to 911 dispatch from the bar. During some of the assaults that occurred on site, employees witnessed the altercations but didn’t report them until questioned by police, records show.

When contacted by the Star through email for comment on the incidents and why they weren’t reported to the appropriate agencies, an unidentified representative from Maloney’s sent the following reply:

“In response to the statement made in your email, our Tucson location has not had any ‘aggravated assaults’ or Acts of Violence take place this year in our leased premise.”

The representative did not respond to a request to identify himself, nor did the representative respond when provided information about the homicide and assaults that occurred on the premises.

The Star reached out to O’Malleys’ owners and its liquor license holder, Brian Cummings, for over two weeks via phone calls, email and certified mail but received no response.

On Aug. 19, 25-year-old Rogelio Zarate died from gunshot wounds suffered in a drive-by shooting in front of Maloney’s. Zarate was left at St. Mary’s Hospital and pronounced dead shortly after.

When police went to the bar after reports of the shooting, witnesses said they saw shots fired out of a pickup truck speeding down Fourth Avenue, according to police reports.

Shortly after the shooting, an SUV drove into the Maloney’s parking lot, several men exited and began to pick up shell casings, witnesses told police.

A Maloney’s security guard told police he’d seen three men having an altercation in the parking lot around closing time, which became heated. As he was approaching the group, the man who had been confronted walked off toward his truck, according to police reports.

The security guard recognized the man from an incident earlier in the week and told police that when he approached him at his truck to ask him to leave, the man told him he was going to sit in his truck and listen to his music to calm down, then leave.

After the guard went back inside, he learned about the shooting that involved the man with whom he had just spoken. He told police he could identify two of the three men involved, police reports say.

No suspects have been located.

In May, an O’Malleys customer was struck in the head repeatedly with a bottle while on the dance floor, police records show. Security escorted her out of the bar — along with her assailant — and told her to seek medical attention. The incident was not reported to police by anyone affiliated with O’Malleys.

A few months before that assault, another woman was struck in the head with a bottle while inside O’Malleys. Instead of calling an ambulance or 911, a security guard told her she needed to go to the hospital since she was bleeding profusely.

After interviewing the victim in the hospital, police followed up and verified that no calls were made to 911 dispatch from the bar.

When police spoke to staff at Maloney’s following an incident that occurred in July, they were told that the bar’s video surveillance wasn’t working. An employee who identified himself as a manager told police that the front door camera was out of order and it’s too dark inside the bar for the cameras to record, the police report said.

In addition to violent crimes, the bars have had contact with the police for other types of incidents, such as underage drinking and over serving customers.

“O’Malleys and Maloney’s definitely have an increased call load as compared to other bars in the area,” said Lt. Corey Doggett, a downtown commander with the Tucson Police Department. “A lot has to do with the parking lot in front and the bar’s location.”

There are no laws requiring Tucson bar owners to report violent incidents to police, Doggett said.

The department of liquor tracks violations, but there’s no set number of violations that result in a license revocation. It could be one serious citation or multiple minor violations.

Bars can also receive violations for nonviolent complaints, such as underage drinking, over serving patrons and illegal drinking games, according to the department’s website.

In addition to more police contact, Maloney’s and O’Malleys also have more violations with the department of liquor than other bars on Fourth Avenue.

Since 2002, O’Malleys has had 10 violations with the Liquor Licenses and Control Department, including allowing disorderly patrons to remain on the premises, failure to protect the safety of patrons and, most notably, repeated acts of violence in 2011, according to the department’s database.

Maloney’s has had 10 violations since 1999, including one for failing to protect the safety of patrons.

The number of violations issued by the state at the following bars since they've been operating.

Note: Not all bars have been in operation for the same number of years.

Man stabbed self in neck in previous incident.

It could take 45 days or longer for liquor department to make a decision.

Manager said it's a result of strict corporate rules about documenting incidents.

Bumsted's to close Sunday; Lindy's on 4th moving in

Bumsted's owner says they were "forced out" after failed attempts to renegotiate lease.

Pregnant woman was among those killed in collision.

The victim declined to press charges against the suspect, who he said was a stranger.

Maloney’s, background left, and O’Malleys are popular Fourth Avenue bars being investigated by the state’s liquor department for violent incidents this year.

Police investigators collected evidence after a fatal drive-by shooting in front of Maloney’s in August.