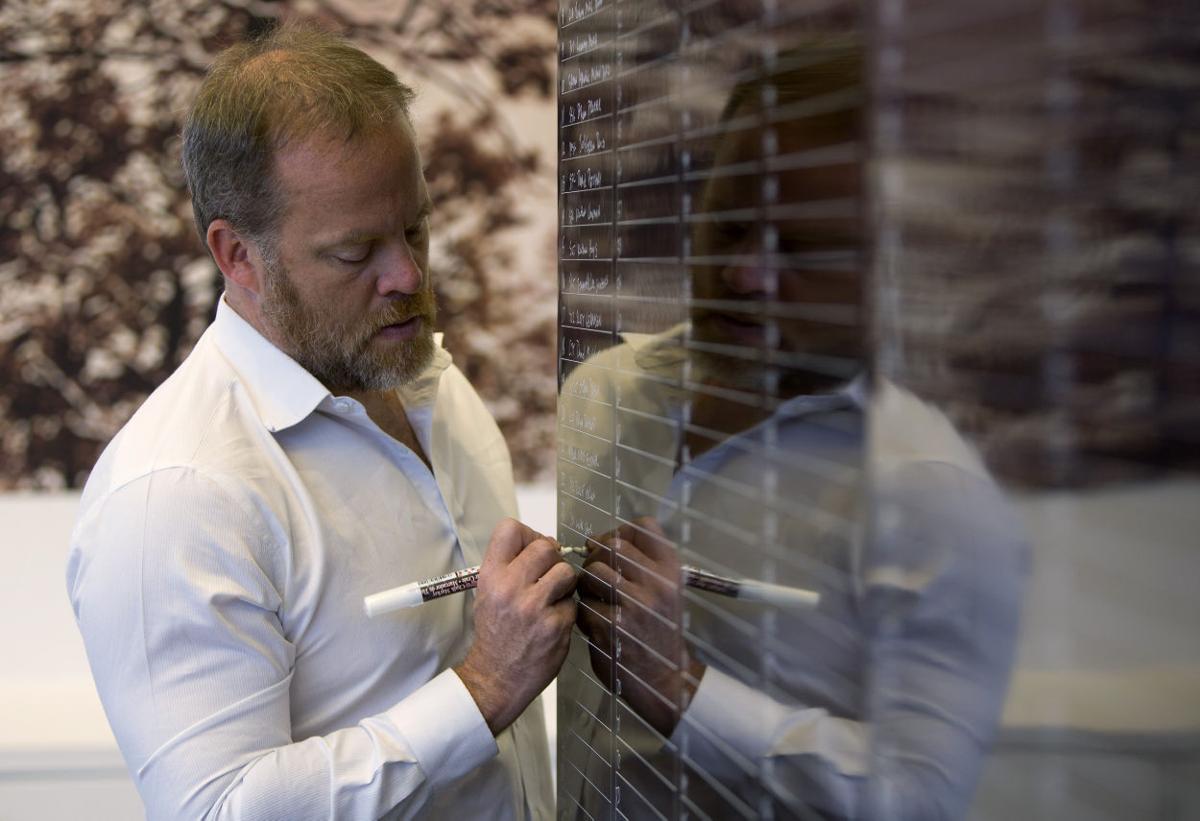 Afghanistan war vet Ron White writes from memory the names of the soldiers who died during the war in Afghanistan onto a wall at the USAA headquarters May 25 in Phoenix. He travels the country with the wall, starting with an empty slate each time.

Afghanistan veteran Ron White has memorized the names of 2,300 Americans who died in Afghanistan. On Wednesday, Wed. May 25, 2016, he wrote them all down on a wall at USAA headquarters in Phoenix. White travels the country writing around 2,300 names and ranks of fallen soldiers in the order they died, all from memory.

By Kaila White The Arizona Republic

PHOENIX — For more than 10 hours on May 25, Ron White stood writing names from memory on a wall in Phoenix.

And they weren’t just any names: In each slot, White scrawled the rank, first name and last name of every American man and woman killed in Afghanistan during Operation Enduring Freedom — in chronological order of their death.

White’s only aid: a capacious memory honed over months and years of training and study.

In observance of Memorial Day, USAA, the financial-services company that caters to military personnel, invited White to write his Afghanistan Memory Wall near a cafeteria Wednesday on its north Phoenix campus.

White is a memory expert and veteran who came up with the idea for the wall after vising the Vietnam Veterans Memorial in Washington, D.C., in 2012. He has written it more than 20 times across the country.

Hundreds, if not thousands, of the 3,600 USAA employees on campus visited throughout the day to see the wall, although the event was closed to the public. This is the first time it has been created in Arizona.

Employees stood quietly, scanning to take in the breadth of the names. Some cried; others talked about friends and family who have served.

Many stopped to visit the one name on the wall they knew: Spc. Pat Tillman, the former Arizona State University and Arizona Cardinals football star who was killed by friendly fire while serving in Afghanistan. He was No. 127 on the wall.

The people behind the names

Among those moved by the wall was Darryl Walker, a retired U.S. Air Force major. He is the patriarch of a “gold star” family, the common term for people who have lost a family member in war.

His oldest son, A.J., was 20 when he told Walker he wanted to serve. It was 2005, deep into the war on terror. Walker asked him to reconsider, but after a few weeks A.J. still felt it was time to do his part.

Spc. Aaron J. Walker, 23, was killed Sept. 18, 2007, in Baghdad, Iraq. Though his son’s name isn’t on the wall, Walker said he appreciates the memorial for “acknowledging the sacrifice of those who don’t have a voice.”

“The biggest word for our family is that we had to redefine ‘normal,’ ” Walker said, tearing up. “You always have that missing seat at your table, that missing piece of your family.

“The families of the folks up there have experienced the same thing we have experienced,” he said. “To acknowledge what those folks are doing for us, day in, day out, past and future, it keeps us all connected as Americans.”

He said he understands that Memorial Day is as much a time to have fun and celebrate the arrival of warm weather as it is to remember those who have died serving our country. He and his wife plan to have fun with their two children and four grandkids.

“It’s because of what these men and women have done for us by laying down their lives that we have that freedom to have fun,” he said, “but just take a moment and recognize and honor the sacrifice of those who made it possible for us to enjoy those freedoms.”

Using a powerful mind to memorialize

He picked Afghanistan because he served in the U.S. Navy Reserve from 2002 to 2010 and was deployed to Afghanistan in 2007. If he had included the more than 4,400 killed in Iraq, the wall would be about 66 percent bigger.

Initially, it took 10 months to memorize the more than 7,000 words involved, he said. Now, every time he writes the wall, he studies for weeks beforehand.

He memorizes by creating images for each name and rank and placing those images within a visualization of different parts of his house in Forth Worth, Texas.

Once he has the unique image, he places it in one of 2,300 locations he has determined in his house. For example, location 1,100 may be on a cushion of his couch. So to remember the names, he simply walks through his own home in his mind and sees the images he placed in order.

The wall project is mentally taxing, he said, but its meaning has grown each time.

“It’s maybe more meaningful because I’ve met more of the families; I know more of the stories” than when he started, he said. “When I write the names I feel like I know some of them now.

“I just do it to keep their memory alive. It’s my way of saying, ‘You’re not forgotten.’ ”

Anyone looking to help White continue writing the wall across the country can donate to him at SupportTheWall.com on-line.

Elijah Hartley-Johnson does not remember much about his godfather.

Afghanistan war vet Ron White writes from memory the names of the soldiers who died during the war in Afghanistan onto a wall at the USAA headquarters May 25 in Phoenix. He travels the country with the wall, starting with an empty slate each time.

Afghanistan veteran Ron White has memorized the names of 2,300 Americans who died in Afghanistan. On Wednesday, Wed. May 25, 2016, he wrote them all down on a wall at USAA headquarters in Phoenix. White travels the country writing around 2,300 names and ranks of fallen soldiers in the order they died, all from memory.