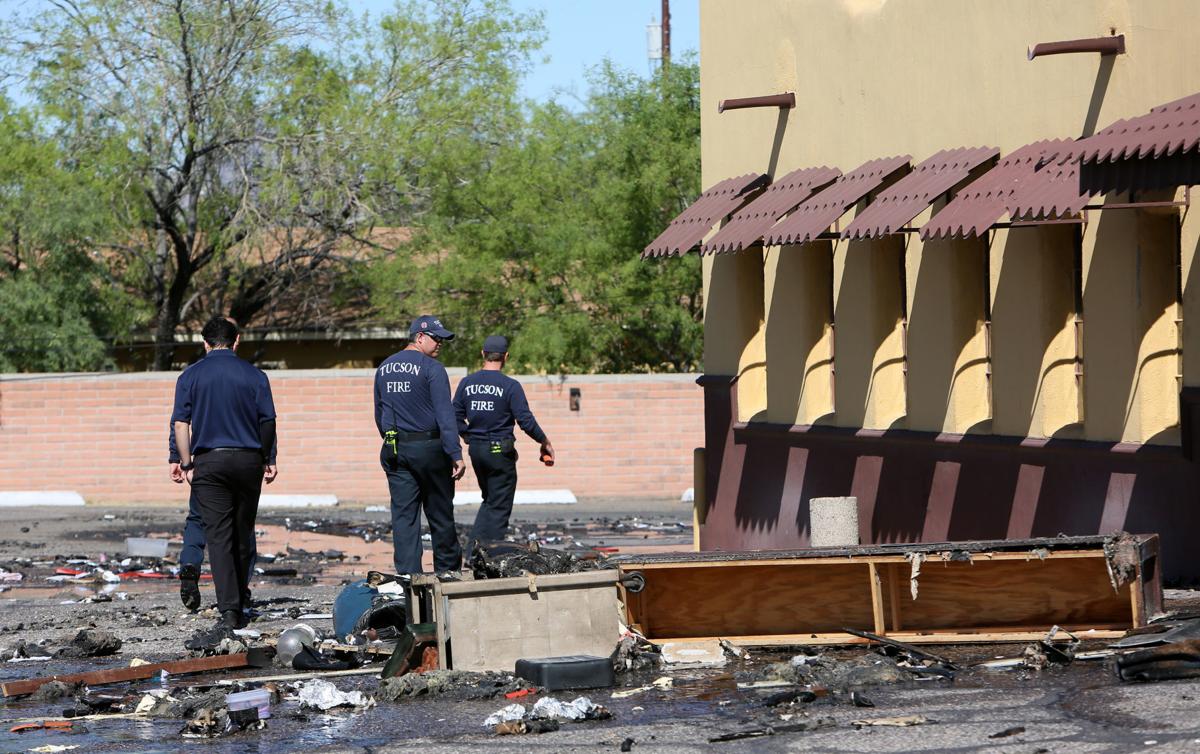 The crew of Tucson Fire Ladder 10 walks through the debris in the parking lot on Saturday after the fire at Micha’s Mexican Restaurant in South Tucson. The fire started late Friday. 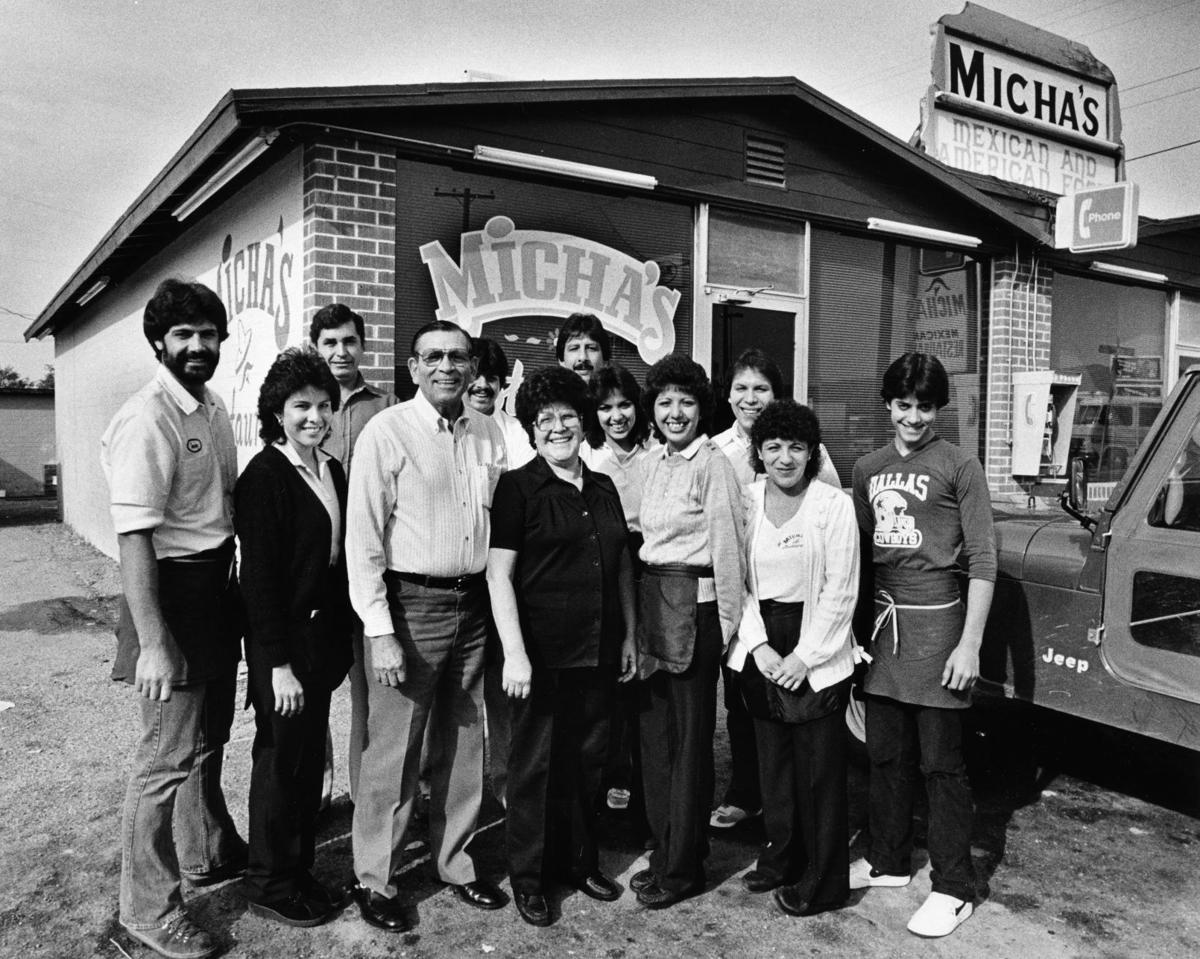 Gilbert and Artemisa “Micha” Mariscal, front, founders of Micha’s restaurant, in front of the original restaurant in South Tucson with family members and workers in 1983. 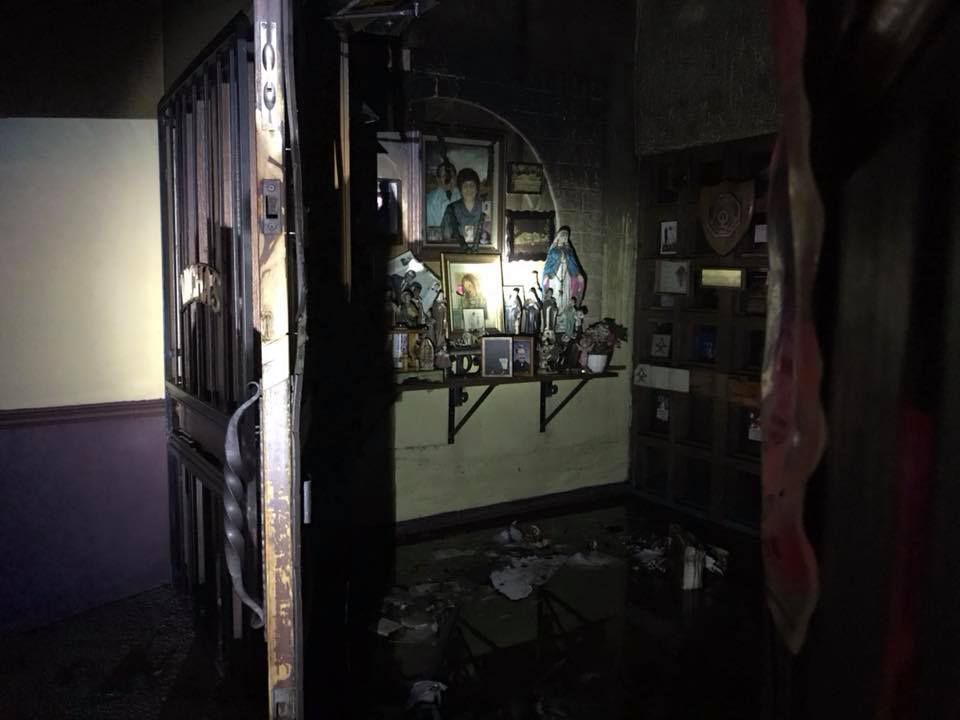 A shrine to the owners and family of Micha’s escaped damage from Friday night’s fire that destroyed the 40-plus-year-old South Tucson restaurant.

When the smoke had settled and the reality set in, Micha’s Mexican Restaurant’s owners and family members saw a glimmer of hope in the restaurant’s remnants.

The shrine that for years greeted diners at the entryway of the South Tucson restaurant, 2908 S. Fourth Ave., was unscathed. No water or smoke had touched the painting of founders Gilbert and Artemisa Mariscal, or the photographs of their son, Richard, and other long-gone employees and family members that made up the shrine.

“I thought that was beautiful,” said Richard Mariscal’s namesake, son Richard, who no longer works for the family business. “The roof fell in on one side, but the outside structure stayed up.” Family members on Monday said they would rebuild the 42-year-old restaurant, but it’s anyone’s guess when.

Most of the details still needed to be ironed out, said Lorraine Mariscal, who runs the restaurant with Deborah Martinez.

“It’s not safe to go inside,” she said in between back-to-back phone calls Monday as she pieced together how to begin the process. “I know we’re going to rebuild.”

South Tucson Fire Department investigators have ruled the fire’s cause as undetermined, although they believe it started near the grill or oven.

“There wasn’t anything that we noticed that was out of the ordinary,” said South Tucson Fire Capt. Andy Luna. “Everything looked normal, like a closed restaurant.”

Luna said when firefighters came on the scene just after 10 p.m. Friday night, all they saw was smoke coming from the building.

It wasn’t until they got inside that they discovered fire in the kitchen and that part of the roof had collapsed.

“At that point, everybody realized, ‘Oh my goodness. This historic building, the family,’ “ said Luna, who grew up in South Tucson. “It was pretty horrific.”

Luna said the loss of Micha’s was still dominating conversations around town on Monday.

Micha’s was the first restaurant when you turned onto the avenue, which is lined with longtime family-owned Mexican restaurants.

Luna said his department’s investigation is complete. Building inspectors will examine the extent of the damage once they determine the structure is safe, and when they are done, insurance investigators will take over.

Tucson Fire Department spokesman Capt. Andy Skaggs said firefighters saw smoke and flames inside Red's Smokehouse and Taproom, 943 E. University Blvd., when they arrived at 12:30 a.m. It took 24 firefighters 14 minutes to douse the fire, which was mostly confined to a smoker in the kitchen, Skaggs said.

Owner Ramiro Scavo, who opened Red's in fall 2015, could not be reached for comment. In a note posted on the restaurant's Facebook page, he said, "We will need to temporarily close the doors while we make sure the grounds meet the high levels of safety that we expect in our space."

"We will be back soon. Thank you all for your continued support," the post stated.

Scavo had a second University Boulevard restaurant, Pasco Kitchen & Lounge at 820 E. University, which he closed in late December. Pasco had been open six years.

Let us remember some Tucsonans who died in 2013

Before ringing in the new year, and keeping in mind that no gathering of names can possibly be complete, we’d like to take a few minutes to re…

A palm tree may seem like a harmless symbol of sunshine, but getting tangled up in one can be deadly.

Cleanup begins at Micha's; construction work to follow next month

Owner says it could be October before South Fourth Avenue anchor reopens.

The crew of Tucson Fire Ladder 10 walks through the debris in the parking lot on Saturday after the fire at Micha’s Mexican Restaurant in South Tucson. The fire started late Friday.

Gilbert and Artemisa “Micha” Mariscal, front, founders of Micha’s restaurant, in front of the original restaurant in South Tucson with family members and workers in 1983.

A shrine to the owners and family of Micha’s escaped damage from Friday night’s fire that destroyed the 40-plus-year-old South Tucson restaurant.