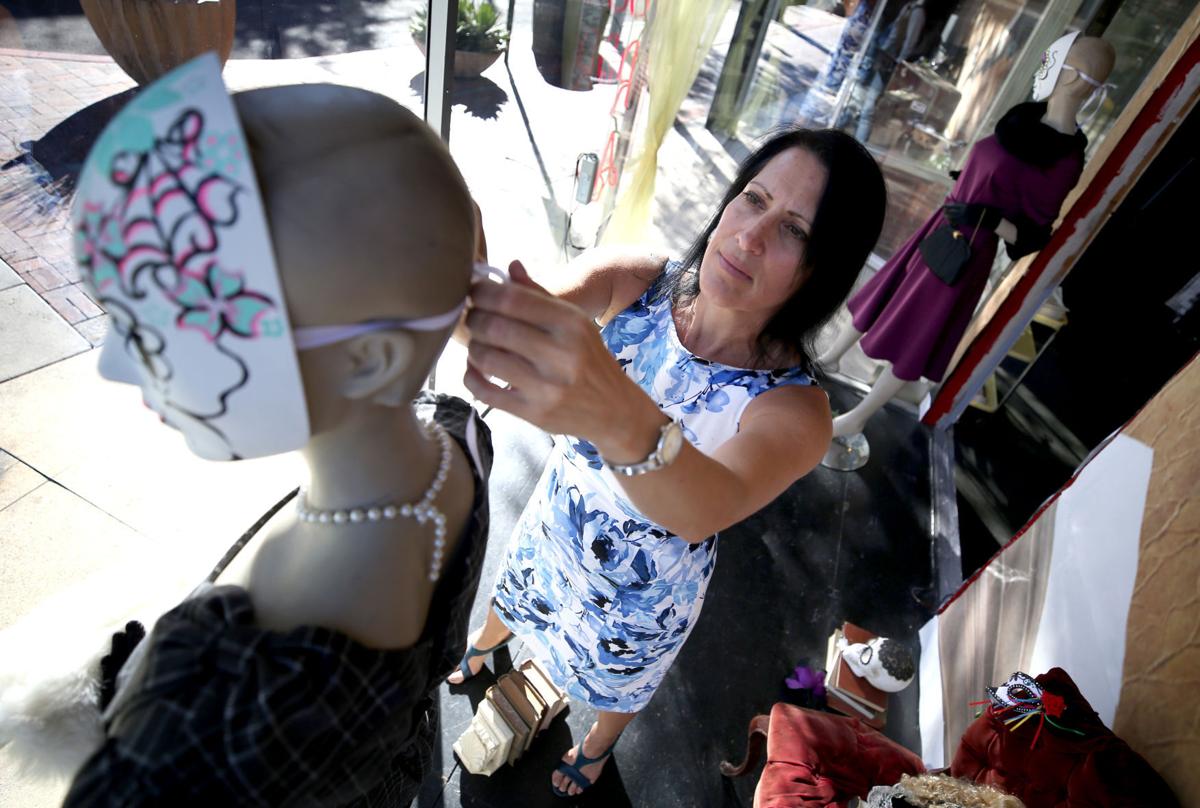 Margo Susco, who is closing her Hydra clothing store, says she’s “a big believer that small mom and pops” can help downtown. 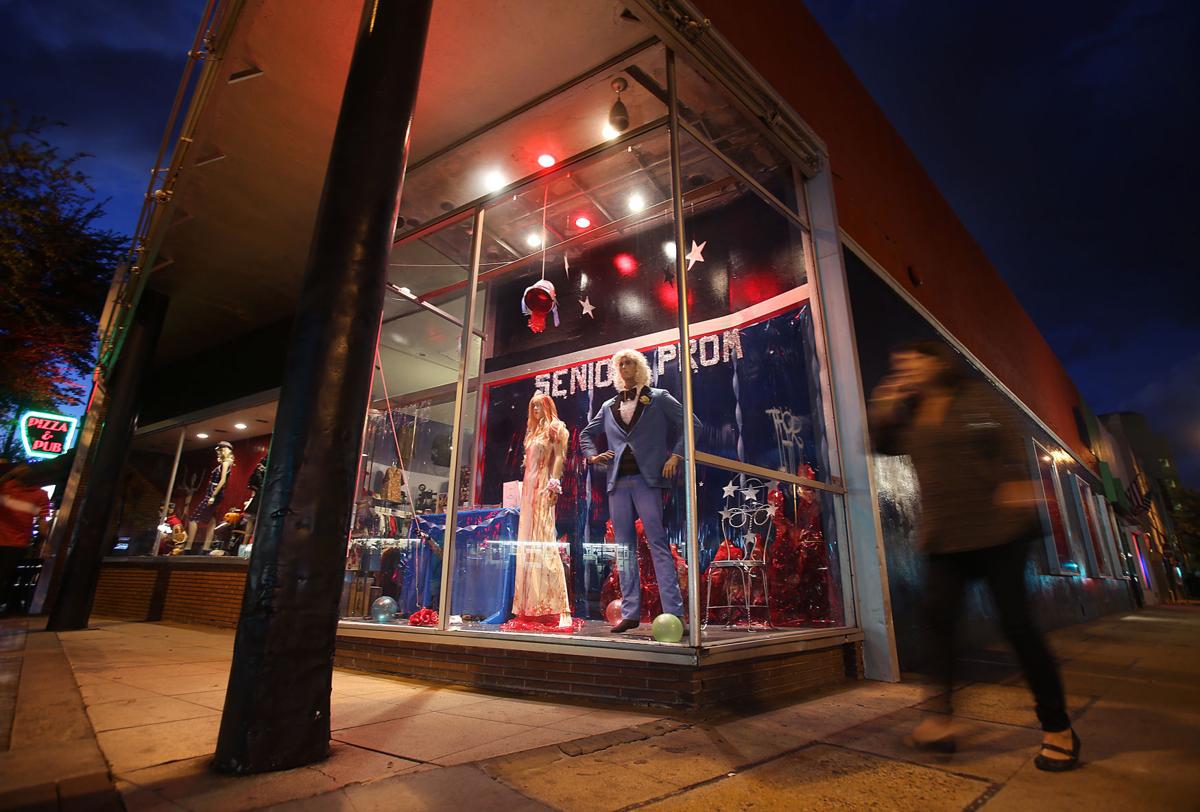 “It’s hard to leave downtown at a time when it’s doing so well,” says Margo Susco, who opened Hydra in 1994. 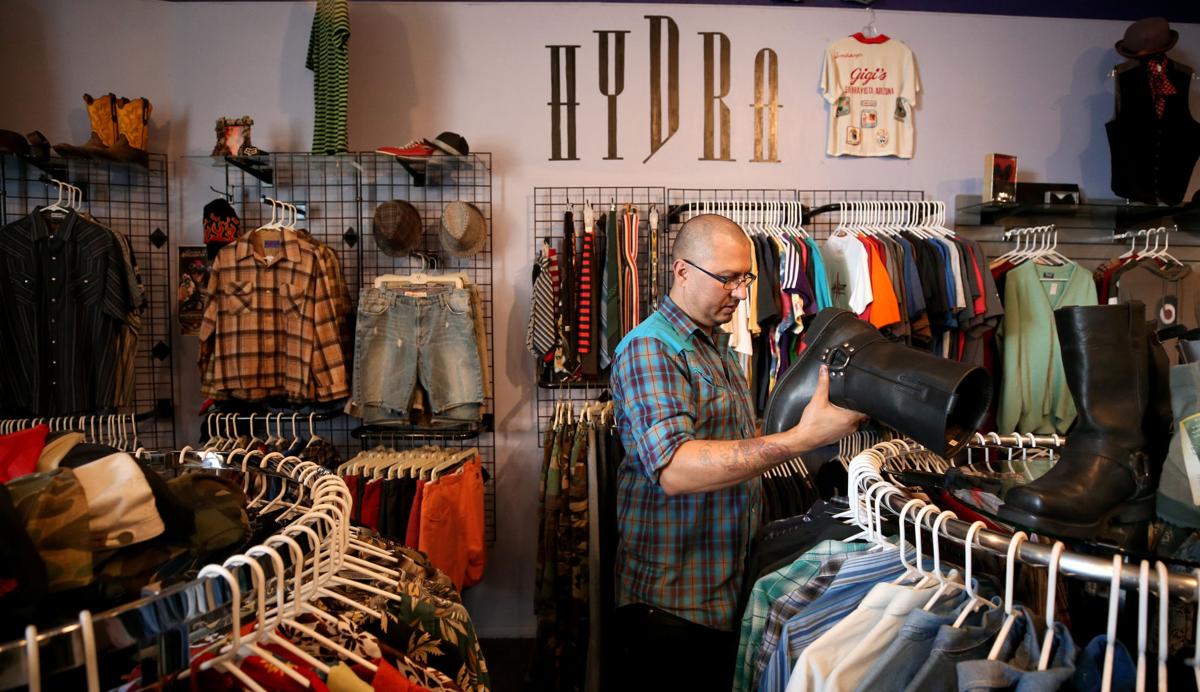 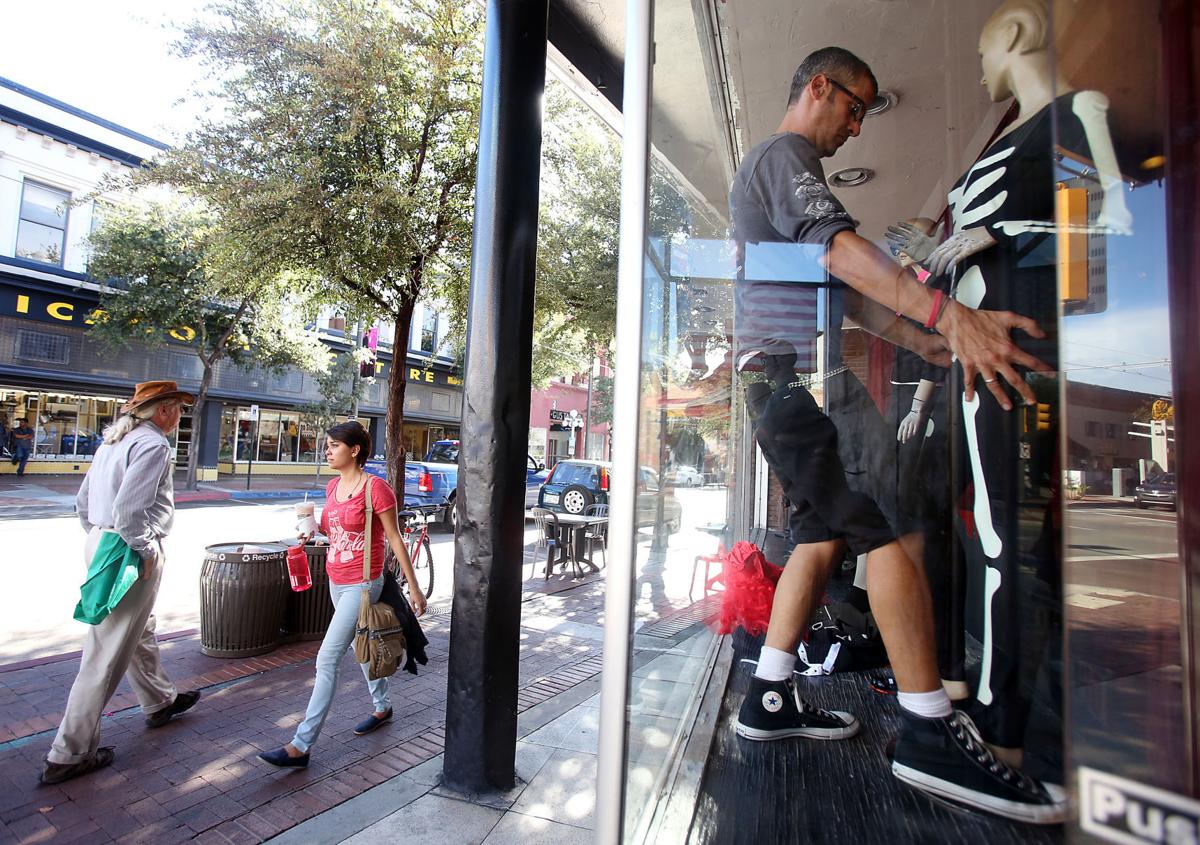 The Chicago Store, left, across the street from Hydra and its co-owner, Joe Susco, might be the site for more than one retail outlet. 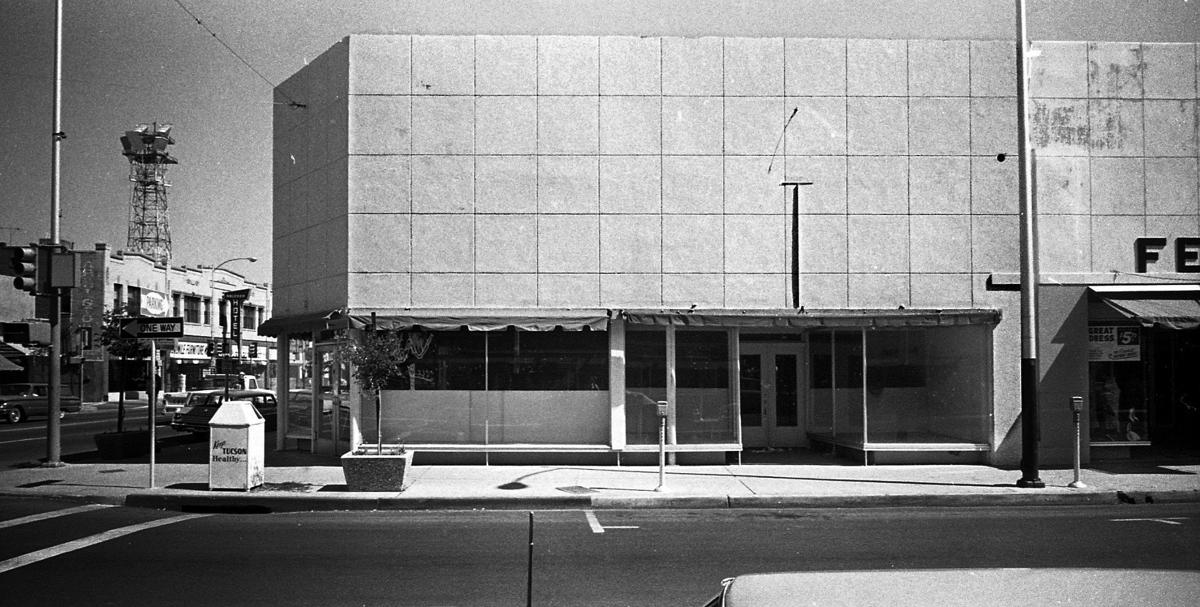 The empty Dave Bloom and Sons store was reflective of the hard times many downtown businesses were experiencing in the mid-1960s. But downtown Tucson is now bustling. 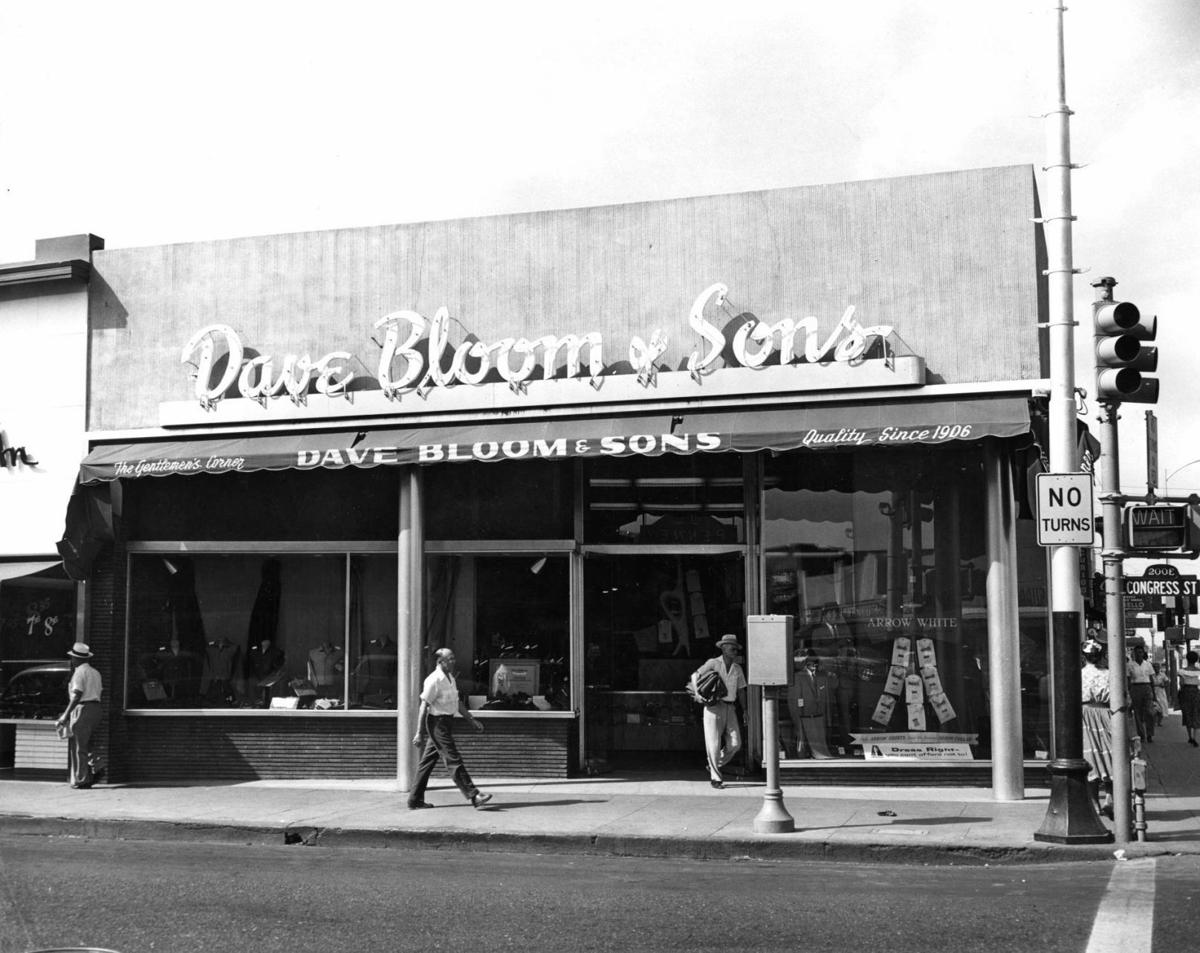 Dave Bloom and Sons men’s clothing was at the northwest corner Sixth Avenue and Congress in 1956. The company moved there in 1931. Hydra has been there since 1994.

As residential projects in downtown Tucson move forward at varying phases of development, some national retailers are sitting on the fence, waiting to see if the population emerges before committing to move in.

With the pending departure of Hydra, the prominent corner of Sixth and Congress streets will have two major vacancies. The former Chicago Store, which was bought by local investors last year, is still empty.

The challenge has been deciding between taking a risk with a local retailer who is experimenting with a concept or waiting for the head count to rise and landing a national chain, said Marcel Dabdoub, a major downtown investor and co-owner of the Chicago Store building.

“It’s really not a linear process,” he said. “We have some retailers that want to make the move … thinking this is a good time because there’s availability now and there may not be later.

“Others think there’s not enough of a customer base yet to make the move.”

After CVS changed its mind about occupying the Chicago Store building, Dabdoub and his partners are considering parceling the building among multiple tenants.

“If one tenant takes the whole building, it will have to be well-established and willing to stay there for the long term,” he said. “If we parcel it up, we can move tenants in and out while they perfect their business model.”

Online retail trends will continue to have an impact on how much of a footprint retailers want to have in brick and mortar, Dabdoub said.

As Hydra owner Margo Susco prepares to leave the retail scene, she said she believes she is leaving at a defining moment for downtown.

“It’s hard to leave downtown at a time when it’s doing so well,” she said. “I’m personally a big believer that small mom and pops can work well with national retailers in a downtown setting.”

After opening in 1994, Susco endured the downturn years and construction of the streetcar by nurturing faithful customers who sought her out.

“I’m very proud of the role we had downtown,” she said. “I never had kids, but this is like having a daughter and now I can hand her off to someone who is good.

“That’s how I feel leaving downtown.”

As new retail is recruited for downtown, Susco thinks local shops will be critical.

“We’re the ones on the front line, cleaning the sidewalk, talking to tourists,” she said. “We still believe in old-fashioned hard work and customer service.”

Hydra closes Dec. 31 as Susco prepares for retirement and plans to continue volunteering in the Tucson community. The boutique will be open Mondays through Saturdays from 11 a.m. to 7 p.m. and noon to 6 p.m. on Sundays.

“Over time, as the critical mass happens, Tucson will see more of the national concepts wanting to be in the area,” she said. “When that occurs, it will be viewed as a ‘seal of approval’ that Tucson has hit the mark.”

As for other retail, they need to see a “critical mass of 24/7 population.”

“The general rule of thumb with grocers is that a grocer needs to have 10,000 residents within its defined trade area to justify a store,” McClure said.

Landlords also need to be creative to lure retailers.

“There is a health ratio of rent to sales, and if a retailer can’t get the sales, the issue of rent is not achievable,” she said.

“What we are seeing elsewhere in emerging downtowns is ground-floor retail being given the ability to pay a percentage of sales to a threshold that would get the retailer its health ratio, then a base rent kicks in. If the sales aren’t there, the base rent doesn’t kick in.”

“Investors are looking for body counts, and it’s going to catalyze some new retailers,” he said.

He pointed to the new hotels in the pipeline and the development of City Park — a Don Bourn entertainment, food and retail project at 40 E. Broadway — as positive signs of investor confidence in downtown.

“I’m not concerned about it at all,” Kozachik said. “It’s not as though the place is turning into a ghost town.”

Wildcats cling to 'next man up' philosophy after another suspension, win over NAU

UA says Phelps' violation was not related to the federal investigation.

Video: Tucson family makes piñatas of all shapes and sizes

The Pinata Factory in Tucson has been making custom piñatas for eight years. Video by: Mamta Popat / Arizona Daily Star 2017

These occupations pay top dollar, don’t require a college degree, and are expected to grow in size over the next decade.

Joe Susco, co-owner of Hydra, is behind the elaborate window displays for the clothing store at Congress St. and 6th Ave. in downtown Tucson. 2015

Southern Arizona Urgent Care to open its ninth site on Campbell and Sixth.

The Oracle Road property was formerly a mall.

Customers can pick up mascara with their Big Gulp and hot dog.

Shoes, apparel and other merchandise are marked down 10 to 30 percent.

The store is home to classic toys, books and "a million crazy things."

Investor bringing back '60s feel at south-side motel in Tucson

The Silverbell Inn will be rebranded Hotel McCoy.

Sun Link is extending the hours of the streetcar for those planning late-night celebrations of New Year’s Eve.

Those familiar with the plans say it will be built on county-owned property that is now a parking lot.

Sears at Tucson's Park Place mall will close this summer

Margo Susco, who is closing her Hydra clothing store, says she’s “a big believer that small mom and pops” can help downtown.

“It’s hard to leave downtown at a time when it’s doing so well,” says Margo Susco, who opened Hydra in 1994.

The Chicago Store, left, across the street from Hydra and its co-owner, Joe Susco, might be the site for more than one retail outlet.

The empty Dave Bloom and Sons store was reflective of the hard times many downtown businesses were experiencing in the mid-1960s. But downtown Tucson is now bustling.

Dave Bloom and Sons men’s clothing was at the northwest corner Sixth Avenue and Congress in 1956. The company moved there in 1931. Hydra has been there since 1994.