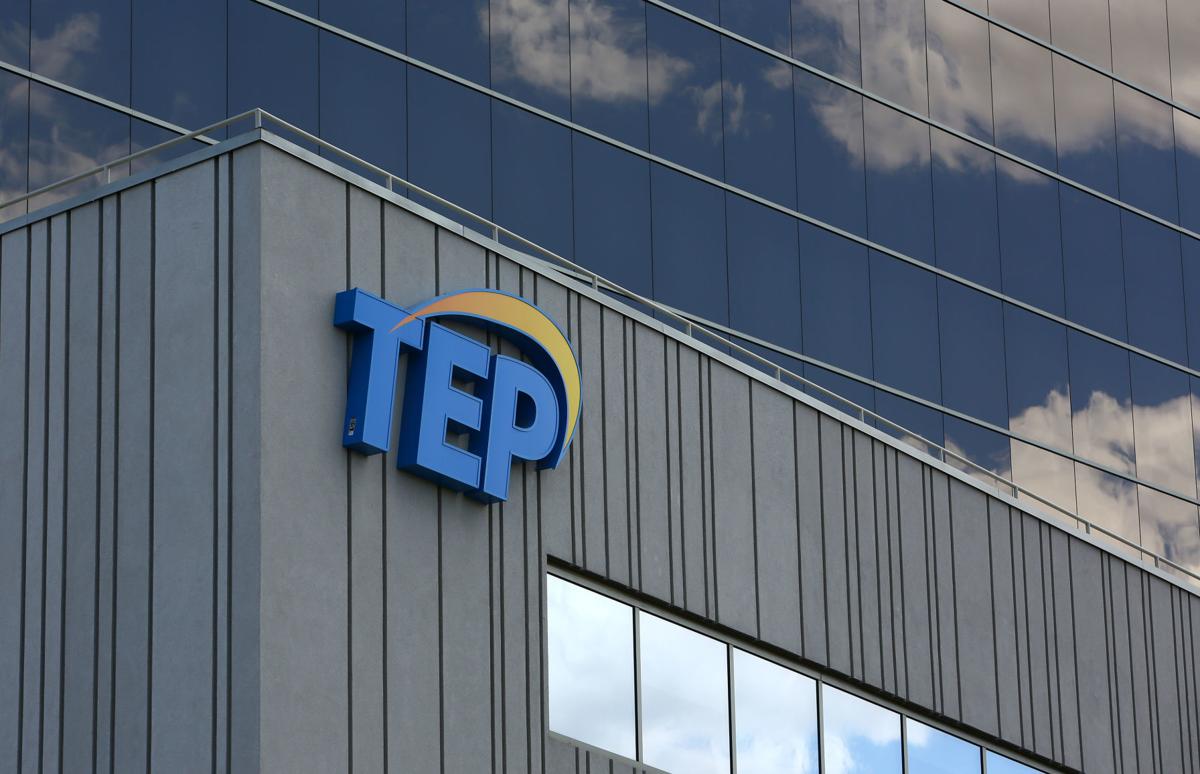 The new rate planning tool replaces a “lifestyle calculator” that suggested plans based on answers to queries on how and when electricity was used. 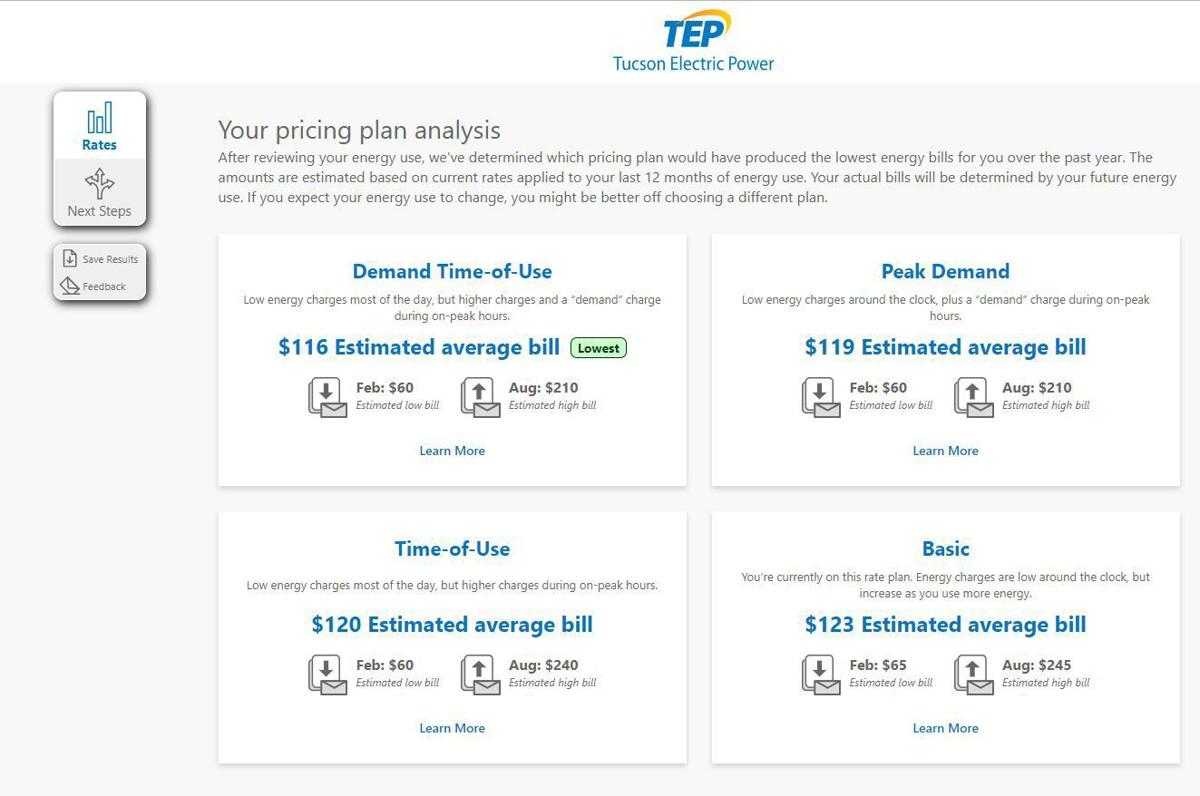 With Tucson Electric Power Co. seeking higher rates by next spring, now might be the time to consider switching rate plans.

And TEP is offering help with a new, online “Pricing Planner” tool, to allow TEP customers to evaluate whether changing rate plans could help them save money on their power bills.

Rolled out in late September, the tool pulls each customer’s usage and billing history and uses that data to generate projected monthly costs for each of TEP’s four available rate plans.

TEP currently offers four types of residential rate plans (not including some legacy rates related to special programs that are no longer available to new customers):

All of the rate plans also add charges for energy transmission and delivery, along with taxes and special surcharges to offset variable fuel costs and pay for renewable-energy and energy efficiency programs.

TEP customers may switch rate plans only once in any 12-month period.

The new online rate planning tool replaces an online “lifestyle calculator” that suggested rate plans based on responses to queries on how and when they use electricity, rather than on actual usage data.

Because it’s based on real-world data, the new Pricing Planner can show potential savings on other plans.

But the tool may not capture all potential savings when customers change their behaviors to take full advantage of off-peak pricing, TEP spokesman Joe Barrios said.

“It’s based on your actual usage data, it compares what you would pay without making any changes,” Barrio said. “But if you have any flexibility and you can lower your peak usage in the middle of the day, — say you can run your dishwasher at night during off-peak hours — then you can save even more than that initial report you received.”

As part of a new rate case filed with the Arizona Corporation Commission in April, TEP has requested an overall rate increase of about 8%, increasing the average home bill by an estimated $7.61, starting next May.

The company isn’t proposing any new home rate plans, though the rates within the existing plan structures may change.

Hearings on TEP’s rate case are scheduled to begin in mid-January.

TEP has long offered a basic home rate, including a basic monthly charge and energy charges based on usage, along with TOU plans.

The utility began offering the peak demand and hybrid demand TOU rates for the first time as part of its last rate case in 2017.

The time-of-use and demand rate plans are designed to shift some usage away from peak demand periods, like summer afternoons.

Utilities have been encouraged by state regulators to drive more customers to such plans, to help minimize the need to build new power plants or buy costly wholesale power to handle peak demand.

“Peak usage is increasing, even though overall usage has remained about the same over the past couple of years, so the service we have to deliver to customers during peak hours has increased,” Barrios said. “Time-of-use plans are designed to help to reduce that peak usage, that’s one of the benefits.”

The state’s biggest utility, Arizona Public Service Co., now requires new customers to sign up for a time-of-use or demand rate and keep it for at least 90 days before switching to a flat-rate basic plan.

Since TEP’s last rate case, a TOU rate plan is the “default” plan for new TEP customers but it remains optional, so they may still set up initial service on the basic rate plan, Barrios said.

But TEP remains behind the curve on signing customers onto TOU and demand plans.

Nationally, about 4% of residential utility ratepayers were signed up for time-based rate plans in 2017, according to a study by the Rocky Mountain Institute.

Consumer advocates agree that customers can save substantially on TOU or demand rates but say educating consumers about those rates remains a challenge.

Consumers must be especially wary of demand rates, since not paying attention and drawing a lot of power at once can result in a high demand charge.

APS has been offering both TOU and demand rates since the 1980s, and as of 2017, nearly 40% of APS home customers were on TOU rates and about 11% were on demand rates, according to regulatory filings.

But the Phoenix-based utility has been criticized for failing to properly explain demand rates.

During an examination of APS rates prompted by a complaint that the utility underestimated the bill impact of its last rate increase, it was found that about 50% of APS customers were not on the most economical rate plan for them.

Barrios said TEP’s Pricing Planner is part of a larger effort to educate customers about their new options.

“When we rolled this out, we got plenty of questions from customers who didn’t understand what a demand rate was,” he said.

Saving on your TEP bill

To use TEP's Price Planner (existing customers), sign in and go to tep.com/compare-pricing-plans

Payment plans will be offered to about 7,500 TEP customers who must catch up on their bills.

Navopache and Mohave electric cooperatives say Arizona Corporation Commission's ban was unlawful. They want it overturned or waived for them.

But TEP says it has no plans to leave the Utility Air Regulatory Group, which has worked against new clean-air rules and is subject of a congressional probe.

A downtown hotel built in 1947 has tripled in size and is now open for guests — both visitors and locals.

The six story hotel has a water slide, arcade and a poolside bar.

PHOENIX — The state’s jobless rate dropped a tenth of a point last month.

The new rate planning tool replaces a “lifestyle calculator” that suggested plans based on answers to queries on how and when electricity was used.