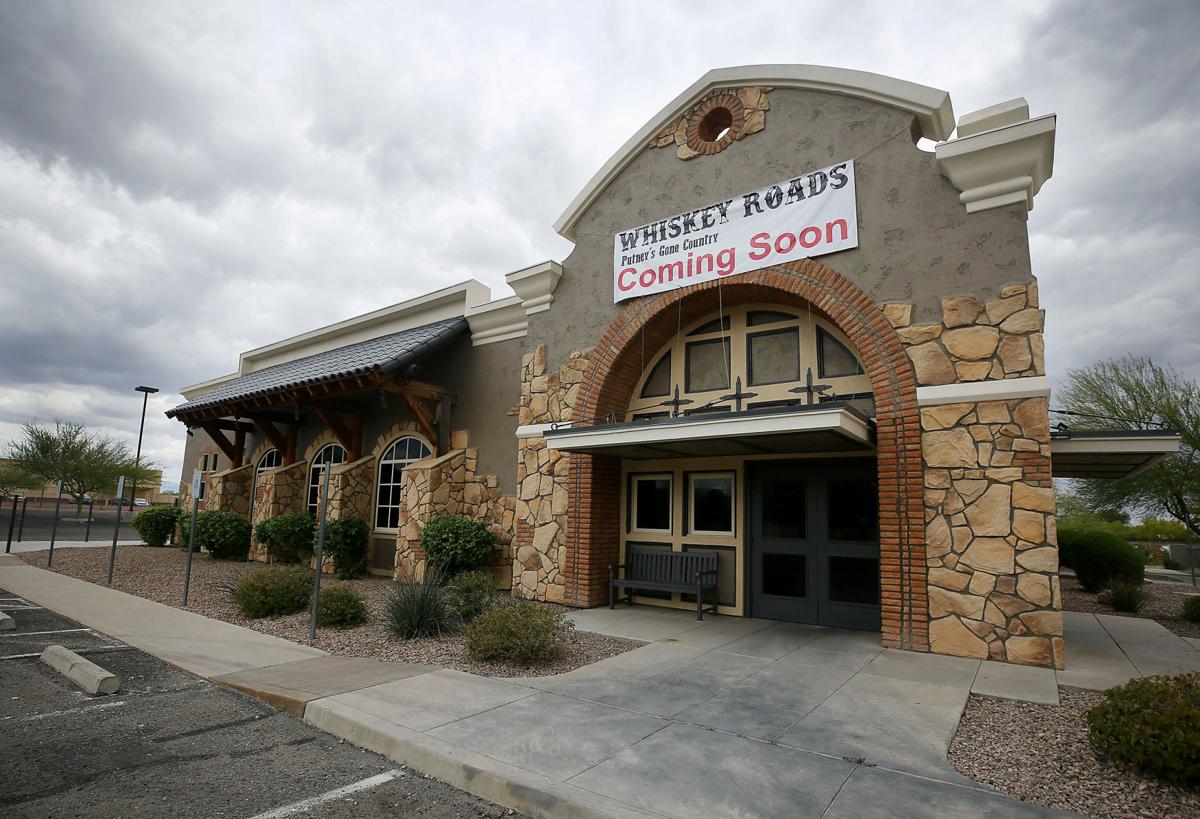 The recently closed Romano’s Macaroni Grill at 2265 W. Ina Road is set to be reopened as Whiskey Roads, a country nightclub, in mid-July. It will be the first country nightclub on Tucson’s northwest side since 2002.

During the day, tables will cover the Whiskey Roads dance floor for lunch and dinner. At night, co-owner Fernando Gomez hopes it will be “the biggest, baddest dance floor in Tucson.”

The owners of Putney’s Sports Bar expect to spend upwards of $700,000 to renovate the former Romano’s Macaroni Grill at 2265 W. Ina Road, across from the beleaguered Foothills Mall. Romano’s closed Dec. 31.

In mid-July, they will open Whiskey Roads in the building that for decades housed Romano’s Macaroni Grill at 2265 W. Ina Road, across from the beleaguered Foothills Mall. Romano’s closed Dec. 31 and the owners of Putney’s began looking at the space not long afterward.

Fernando Gomez and his Putney’s partners Greg Wexler and Josh Arvizu initially toyed with the idea of opening a breakfast restaurant, but decided what Tucson really needed was a country night club, Gomez said.

The Maverick on East Tanque Verde Road is the city’s lone country nightclub after the short-lived Denim & Diamonds closed in summer 2017.

Gomez said the partners will spend as much as $700,000 renovating the 8,000-square-foot Ina Road building including adding a patio, stage and dance floor.

“We want to have the biggest, baddest dance floor in Tucson,” he said Wednesday afternoon as he and his partners showed off the dance floor to Tucson country singer Caiden Brewer and Duhamel Wayne Cassell, aka DJ Du, who is curating the entertainment for Whiskey Roads.

In addition to Cassell DJing at the club, he will coordinate with local bands to perform there. Cassell was the house DJ at the long-closed Cactus Moon back in the 1990s and early 2000s before he embarked several years ago on a Nashville career touring with Jason Aldean and performing with big names including Old Dominion, Jake Owen and Florida Georgia Line.

Whiskey Roads will have a split personality. By day, tables will cover the dance floor as the restaurant serves a menu of salads, burgers and sandwiches for lunch and an expanded menu including steaks and seafood for dinner. Lunch prices will run $10 to $15; dinner will top out at $24 for steak, Gomez said.

“It’s a country-western bar with great food with a twist,” he said, noting his 23-year cooking career with stops at several Tucson resorts including the Ritz- Carlton Dove Mountain before he joined Putney’s in summer 2016.

Gomez initially joined Putney’s as the executive chef months before it opened in September 2016. He became a partner in the business that fall after the death of Michael Jacobson, who was a key player in renovating and rethinking Putney’s after he and Wexler bought the landmark bar. The monthslong renovation of the bar included nearly gutting the space, stripping the floors down to bare concrete, replacing all the kitchen equipment and creating an open kitchen and installing windows that look out onto a 100-seat patio facing North Oracle Road. They renamed the business Putney’s PitStop Sports Bar & Grill, but regulars still refer to it simply as Putney’s.

Although Tucson boasts several country-music themed bars , this will be the first country nightclub on Tucson’s northwest side since the New West/Gotham closed in summer 2002, a year after it was besieged by controversy surrounding a deadly shooting in the club in 2001. The only other true country nightclub offering regular live entertainment and dancing is the Maverick, which has been a cornerstone of Tucson’s country music scene for more than five decades.

Putting a new face on Putney's in northwest Tucson

Caiden Brewer, a former football standout at Mountain View High School, has been performing at Tucson clubs and bars for more than a year. He’…

One year in, Brewer looks at statewide, regional tour

Tucson singer-songwriter recruits a band to join him on the next chapter of his musical journey.

Showcase goes behind the song to find the story

Tucson songwriters to share their inspiration and art at Rialto concert.

March 1 event at The Maverick focuses on songwriters.

Duhamel Cassell was on stage working the turntables, getting the crowd of 4,000 pumped up on that Wisconsin summer night in 2012, when someone…

The move will enable the barbecue restaurant to increase production, offer more seating.

This will be the fourth location for the popular neighborhood restaurant/bar.

Hawaiian doughnuts fly off the racks of Tucson's newest shop

The number of people entering the workforce in Arizona, whether as first-time workers or people moving here, is much stronger than the rest of the country, an official says.

A brewery with a dog park is coming to midtown Tucson

MotoSonora Brewing Co. hopes to open this year with rotating beers on tap.

Tucson's Famous Dave's could be model for chain nationwide

The barbecue restaurant is expected to reopen May 6 in midtown as a fast-casual counter service eatery.

Restaurant will specialize in Turkish and Mediterranean cuisines.

The recently closed Romano’s Macaroni Grill at 2265 W. Ina Road is set to be reopened as Whiskey Roads, a country nightclub, in mid-July. It will be the first country nightclub on Tucson’s northwest side since 2002.

During the day, tables will cover the Whiskey Roads dance floor for lunch and dinner. At night, co-owner Fernando Gomez hopes it will be “the biggest, baddest dance floor in Tucson.”

The owners of Putney’s Sports Bar expect to spend upwards of $700,000 to renovate the former Romano’s Macaroni Grill at 2265 W. Ina Road, across from the beleaguered Foothills Mall. Romano’s closed Dec. 31.