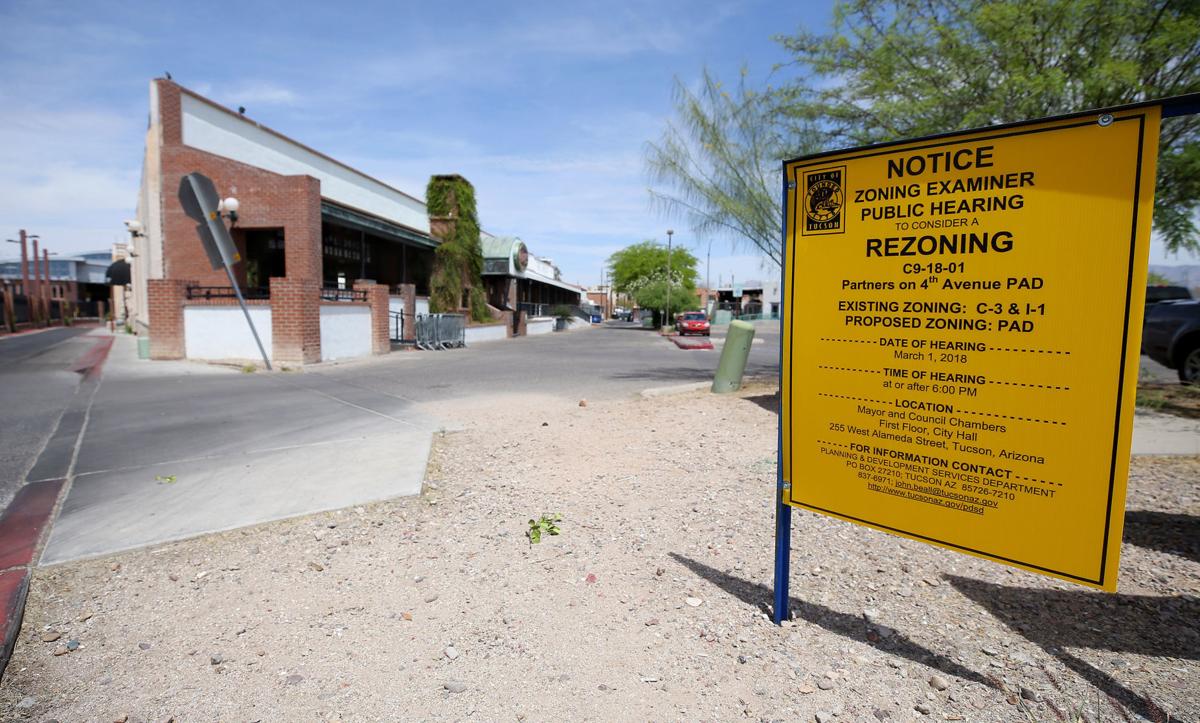 A sign at the entrance to Maloney’s Tavern, 213 N. Fourth Ave., announces a rezoning hearing. Developers are planning to build an apartment complex on the south end of North Fourth Avenue, which would displace the bar. 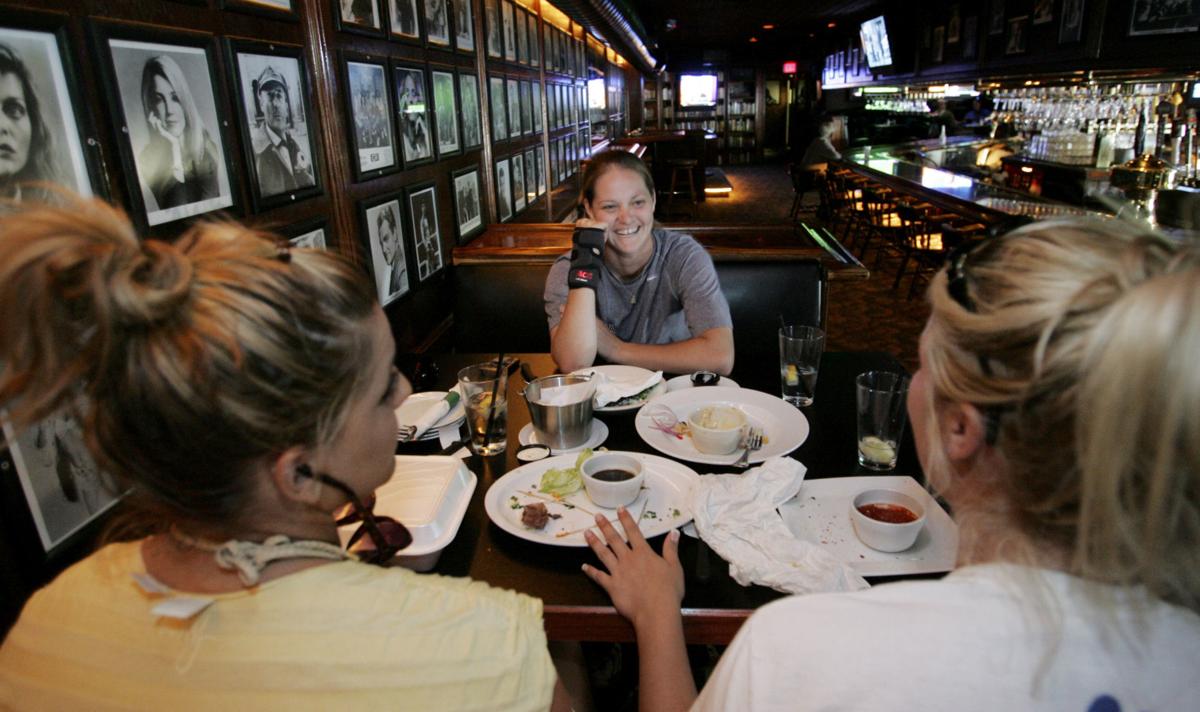 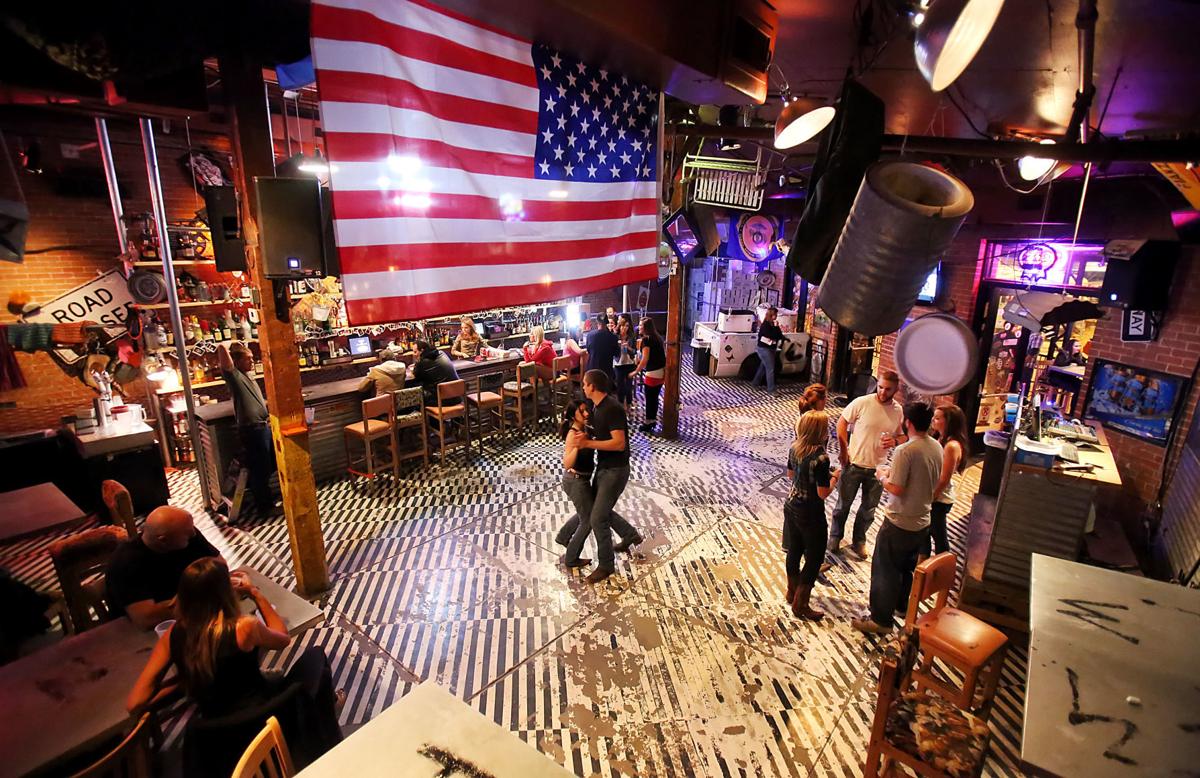 The Wreck, 213 N. Fourth Ave., next to Maloney’s, would also be replaced by a proposed apartment complex. Apartment foe Arlene Leaf says it is “totally inappropriate.”

Distraught over more plans to add tall buildings on North Fourth Avenue, some residents and area merchants hope city leaders will quash the latest proposed development — an apartment complex that will take the place of Maloney’s Tavern.

The mixed-use project would include market-rate apartments and ground-level retail, which would specifically exclude — among other things — gun shops, pawn shops, marijuana dispensaries or drive-through services, records filed with the city show.

Partners on Fourth will appear before the Tucson City Council Tuesday, April 17, hoping to get the zoning and regulatory approval for the southwest corner of Fourth Avenue and Eighth Street, bordered by Stevens Avenue on the west.

Their concept plan, filed with the city, shows the west side of the site, along Stevens Avenue, would have two buildings of a minimum 110 feet and maximum 160 feet in height.

A shorter building to the east would be a minimum of 80 feet and maximum of 110 feet in height, neighbored by a 50-foot building and a 30-foot building, the shortest of which would sit on Fourth Avenue.

“We have a lot of concerns, especially when it comes to parking and making sure the retail remains local and is in character with the rest of Fourth Avenue,” said Fred Ronstadt, executive director of the Fourth Avenue Merchants Association. “Some people see it as a great thing that more people will be down in the area to patronize their businesses; others are concerned about the gentrification of the area.”

He said the association does not have an official position on the proposed development.

“We’re advocating for local retail and mitigating the lost parking,” Ronstadt said. “We have, especially at night, challenges with parking.”

Partners on Fourth would not be the developers of the project, but would sell to a developer once all the necessary entitlements are in place. The number of units and stories will depend on the future developer’s choice of ceiling heights for the apartments.

The city of Tucson Office of Integrated Planning Historic Preservation Office has granted permission for the two existing structures to be demolished “in the interest of infill development,” city records show.

This latest proposal comes on the heels of another apartment complex project on Fourth Avenue.

Developer EdR, based in Memphis, Tennessee, is planning to build a multilevel apartment complex on the avenue, between Sixth and Seventh streets, called The Union on Sixth.

The property is mostly occupied by The Flycatcher bar and music venue.

The complex would be market-rate apartments with about 250 units with 1-, 2- and 3-bedroom floor plans.

Arlene Leaf, owner of Tucson Thrift, 319 N. Fourth Ave., has had her store there for 38 years and is one of the organizers of the “Save Fourth Avenue” movement.

“Totally inappropriate to scale for Fourth Avenue,” she said of both projects. “The big buildings belong downtown with the other big buildings.”

In a recent letter-writing campaign she helped organize, half of the people who wrote letters objecting to the buildings were out-of-town visitors.

Merchants are also concerned that the apartment units will primarily be rented by college kids.

“We’d like people living here who shop in our stores and are active in our community,” Leaf said. “Students are not, they’re separate and none of us believe the developments will be filled with young professionals.”

City Councilman Steve Kozachik, who represents Fourth Avenue, said the city’s responsibility is to consider the increased traffic and noise collectively when it comes to these developments.

The Union on Sixth, for example, is being developed by the owners of The District student housing on Fifth Avenue, and Kozachik said they could offer some public parking in their parking structure.

Also, owners of undeveloped land could turn it into public parking lots.

“We don’t have the money or real estate to build a four or five-story structure to take care of parking on Fourth Avenue,” he said. “No one is going to be the magic bullet.”

Developers are negotiating the purchase of two sites.

TUCSON — A July 3 trial has been set for a U.S. Customs and Border Protection officer in Southern Arizona accused of falsely claiming he was b…

The Republican-controlled Arizona Legislature is moving to ensure that ailing Sen. John McCain's seat isn't on the November ballot if he leaves office

A sign at the entrance to Maloney’s Tavern, 213 N. Fourth Ave., announces a rezoning hearing. Developers are planning to build an apartment complex on the south end of North Fourth Avenue, which would displace the bar.

The Wreck, 213 N. Fourth Ave., next to Maloney’s, would also be replaced by a proposed apartment complex. Apartment foe Arlene Leaf says it is “totally inappropriate.”