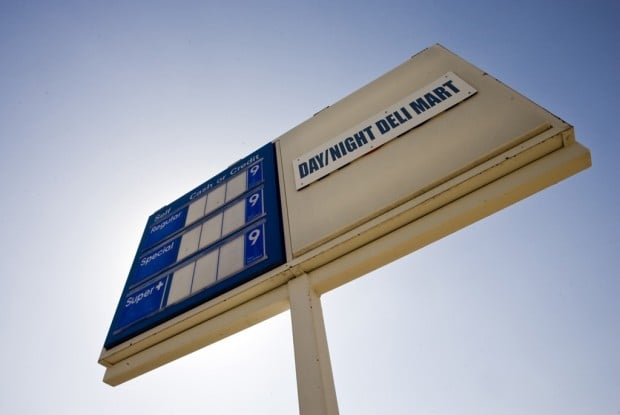 At empty sign at Day/Night Deli Mart at Orange Grove and La Cholla, which was covered with graffiti, has been repainted. 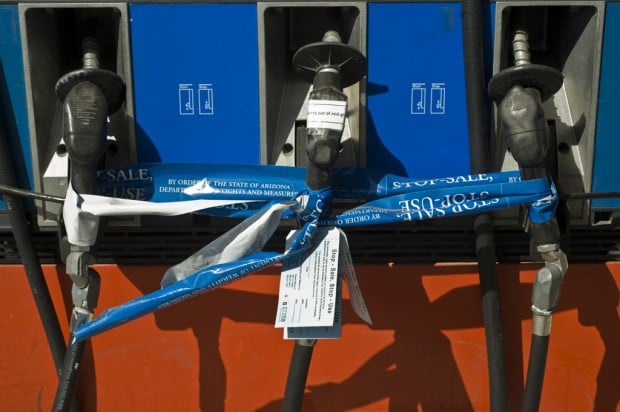 Quik Mart is in escrow to buy the closed Day/Night Deli Mart, where pumps are still tied up, at West Orange Grove and North La Cholla roads. 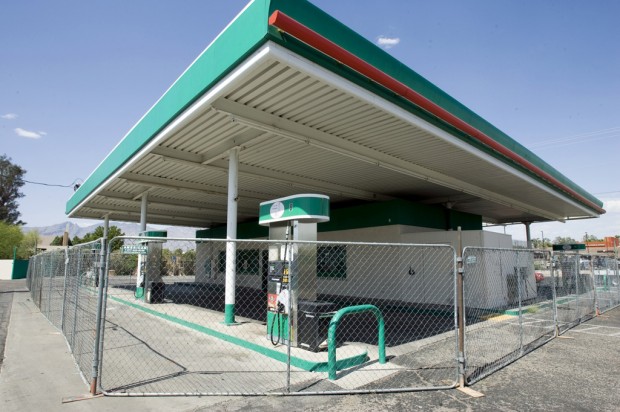 "Property values in gas stations have dropped tremendously, because there's so many of them on the market," says Tom Cooley, who closed his C & T Oil gas station in April. 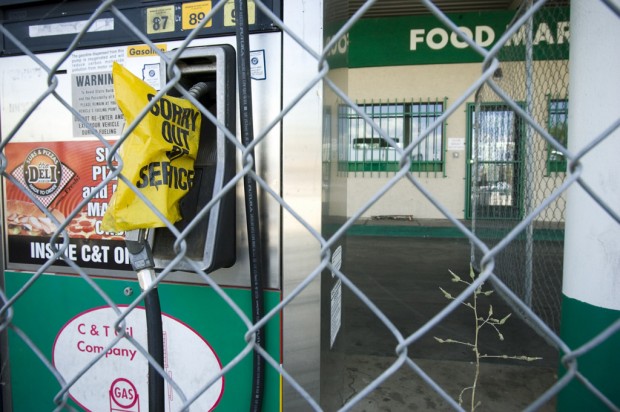 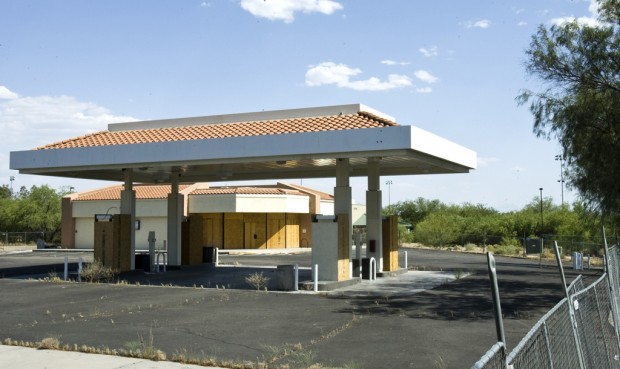 This Valero gas station, which occupies a very large lot at River Road and North First Avenue, is one of the many stations closed around town. 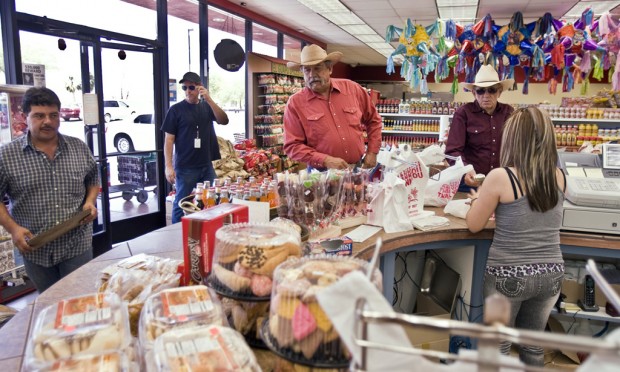 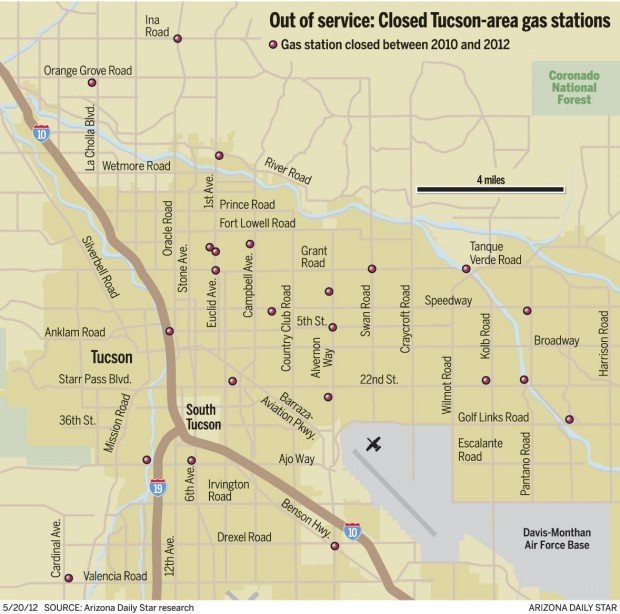 Chain-link fences are going up, signs ending in "9/10" are coming down, and pumps are being sealed - or removed altogether.

Across Tucson, the service-station industry is going through a shake-out. About two dozen gas stations have closed since the beginning of 2010, many of them independent shops with local owners.

Owners cited a variety of factors, but perhaps the most direct one is the arrival of the conquistadores from Oklahoma, QuikTrip. The Tulsa-based company opened its first Tucson-area store in January 2010 and has put up 12 more since. Another three are under construction.

"They're not building a station in order to capture new market," said Robert Mahlstede, who was president of a local company that owned 17 Catalina Mart stations before selling them last year. "They're clearly and totally coming in to take share away from someone else."

"We're coming in with a new prototype. We never stand still. We're always looking for a way to better or enhance ourselves," Mike Thornbrugh said.

But QuikTrip's arrival likely accelerated a process already under way. Independent stations were having trouble competing with discount-priced fuel at some chains and supermarkets, some of which have even sold gas at a loss to bring customers into their stores and spending there, said Jesse Lugo, a former gas-station owner in Tucson who worked as a lobbyist for independent dealers.

Now neighbors are faced with an eyesore that could last years. Some stations, like an old Exxon at the corner of East Broadway and Camino Seco, remain fenced-off and unused after six years or more.

Others, like the Gas City at West Ajo Way just west of Interstate 19, are converted relatively quickly. It took a couple of years, but on March 13 the old service station re-opened as an El Herradero meat market.

"It's just so competitive," Cooley said. "People like Fry's will sell it (gasoline) at about my cost on fuel. They'll give 10 cents a gallon off, and you can't compete with 'em. Circle K is building like crazy, and so is QuikTrip."

But that's not the only issue for small owner-operators, Cooley said. Credit-card companies charge the retailer about 2.5 percent of the value of each purchase made with the card, he said. That eats into already-narrow profit margins.

Then there's the land. Like commercial property across Tucson, the C&T site has lost much of its value, restricting Cooley's options.

"Property values in gas stations have dropped tremendously, because there's so many of them on the market," he said.

In part because of that decline in property values, it's become harder for independent operators to get financing, Lugo said. The same way homeowners have lost the equity they might have once tapped for a loan, many commercial-property owners also owe more than their properties are worth.

Another factor, Mahlstede said, is the desire of oil refiners to keep their refineries running at high capacity. The difference between running a refinery at 98 percent of capacity and 92 percent can be the difference between making big profits and just breaking even, he said. The stations Mahlstede ran were sold in June to Western Refining of El Paso.

"Western's not necessarily doing it to make any money at the gas station. They're just keeping their refinery going," he said.

That allows them to keep gasoline prices lower at the pump than independent retailers could.

Even the high price of gas isn't good for retailers, said Troy Little, president of the Tucson-based chain Quik Mart, which operates 26 stores in the area.

"When there's $4 per gallon fuel, people don't have disposable income they did at $2 per gallon fuel," he said. "They won't come in to get that soda and a bag of Fritos."

When an owner closes a station, the most desirable outcome is that it will be sold to another gas-station operator, said Michael Green, a Phoenix real-estate broker who runs MJG Gas Station Specialists.

"The preferred way for the owner is to sell it as a gas station, because in doing so he's going to sell his gas-station business," Green said.

That's happening in the case of the Day/Night Deli Mart at the corner of West Orange Grove and North La Cholla roads. Quik Mart is in escrow to buy that store and turn it into the chain's 27th location, Little said.

But that won't be the case with some of the recently closed stations. Tucson still is oversupplied with service stations, Mahlstede said, and, based on the number of gallons each station sells, each new QuikTrip may end up displacing four of the old-fashioned, smaller stations.

So, some stations will have to be converted to new uses. Perhaps the main obstacle is the underground tanks where stations store their fuel. Environmental evaluations must be done to show that the tanks aren't leaking, and, after a year of a station's closure, the tanks must be removed and the holes filled in.

At Cooley's station on Alvernon and Fifth, the cost of removing the tanks would likely be $30,000 or so, he said.

In the meantime, neighbors of closed stations such as Chuck Mitchell have to simply bear the aggravation of the vacated lots. Mitchell owns the House of Hubcaps at 2745 N. First Ave. Next door is a lot that Circle K recently left in favor of a large new station a few blocks up the street at First and Fort Lowell. Across the street is the graffiti-covered shell of the Quick Pic #2.

"It degrades the area," Mitchell said, leaving the impression that it is "unsafe and going downhill."

Mitchell used to buy gas at the cross-street neighbor to support him, but now he usually goes up the street to a clean station that opened April 26 between his store and the new Circle K: It's a QuikTrip.

How a Tucson ranch cowboy'd up during the COVID-19 pandemic

When COVID-19 got tough, the owners of White Stallion Ranch stayed in the saddle and adapted to the new environment.

California investors buy complex near University of Arizona for $8M

How Much Cash Should You Keep In The Bank?

Bank accounts can make paying bills and managing spending easier. And a savings account provides a convenient place to keep cash you may need to tap in an emergency. But how much money should you keep in checking and savings? Is it possible to have too much cash in the bank? Finding the right balance […]

What is Bitcoin and how does it work?

Understanding the ins and outs can be tricky—let’s take a closer look at how Bitcoin works as well as more of this week's best money advice from experts.

Tucson-based Sion is developing long-endurance batteries for drones and working with major automakers to test its battery tech for electric cars.

What Is Bitcoin And How Does It Work?

Not only is Bitcoin the first cryptocurrency, but it’s also the best known of the more than 5,000 cryptocurrencies in existence today. Financial media eagerly covers each new dramatic high and stomach churning decline, making Bitcoin an inescapable part of the landscape. While the wild volatility might produce great headlines, it hardly makes Bitcoin the […]

At empty sign at Day/Night Deli Mart at Orange Grove and La Cholla, which was covered with graffiti, has been repainted.

Quik Mart is in escrow to buy the closed Day/Night Deli Mart, where pumps are still tied up, at West Orange Grove and North La Cholla roads.

"Property values in gas stations have dropped tremendously, because there's so many of them on the market," says Tom Cooley, who closed his C & T Oil gas station in April.

This Valero gas station, which occupies a very large lot at River Road and North First Avenue, is one of the many stations closed around town.