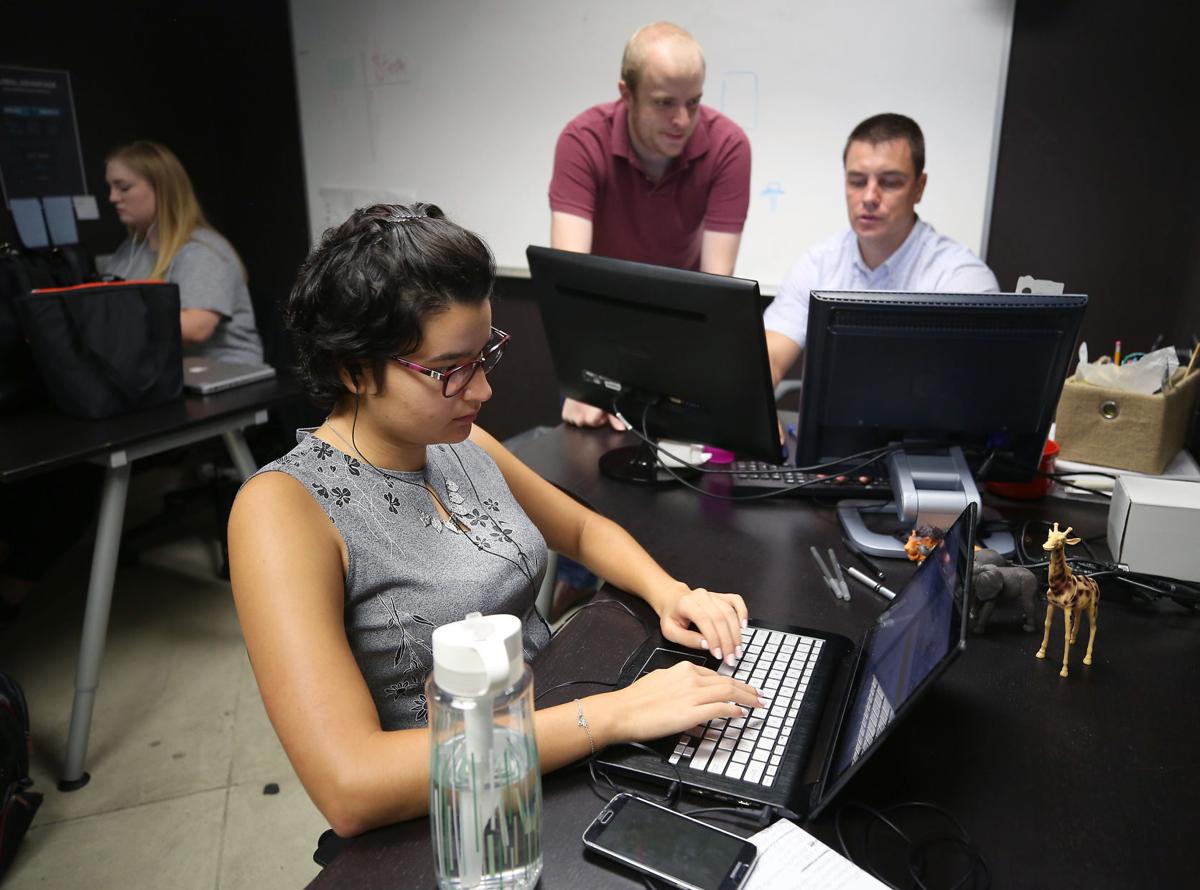 Amanda Marburger, front, a junior marketing strategist for Nuanced Media, works out of the CoLab Workspace with her co-workers. CoLab is part of Startup Tucson, which has lost its funding due to federal cuts. 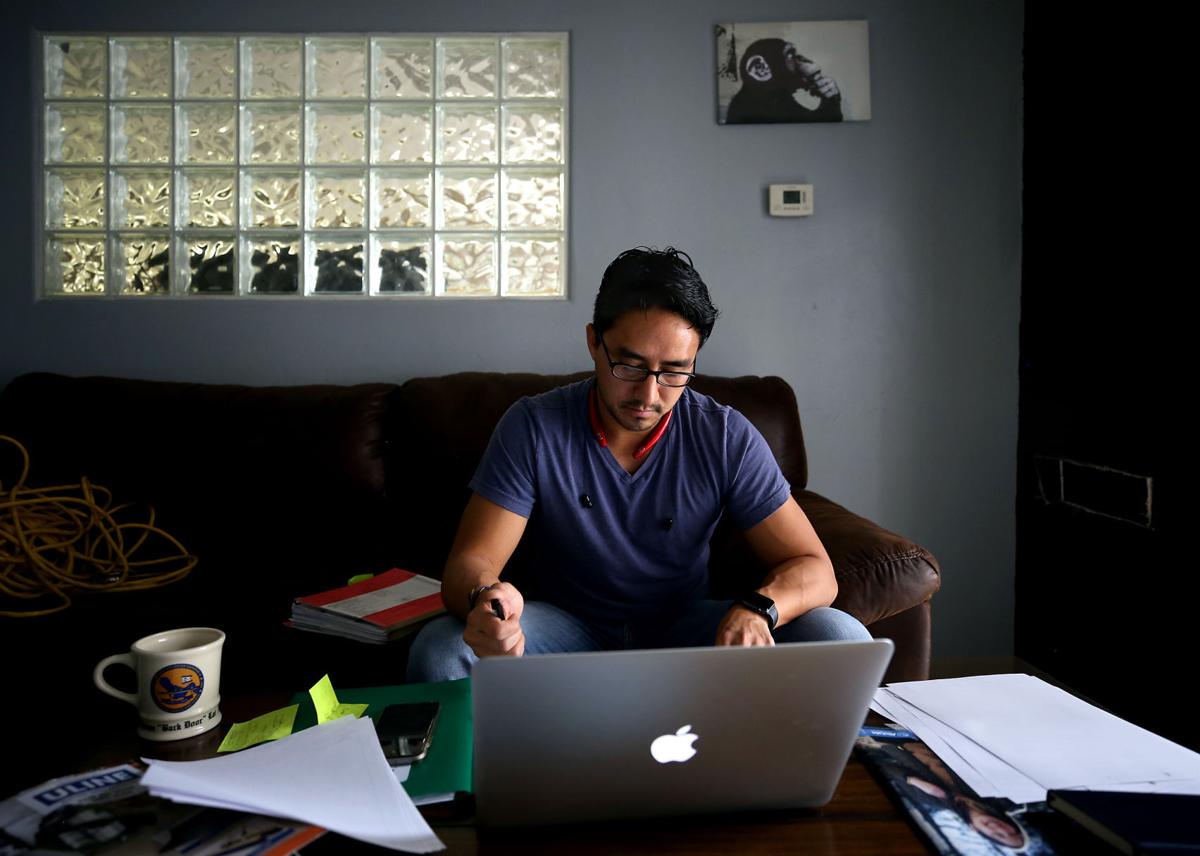 Adrian Lai, chief executive officer of Biz Eatz, works out of the CoLab Workspace located at 17 E. Pennington Street on August 1, 2017. Lai started working on his idea full-time in April. Thryve ScaleUp, a program run by Startup Tucson, has lost its funding due to cuts in the U.S. Small Business Administration.

Tucson’s main business startup group is retooling after losing more than half of its budget due to federal budget cuts.

In June, Startup Tucson was told that it would not get the last two years of funding from a five-year, $1.44 million contract under the U.S. Small Business Administration’s “ScaleUp America” program, which funded business education and training to help companies grow rapidly and create jobs.

The SBA informed all 15 awardees nationwide that the ScaleUp program was being discontinued due to a change in priorities from the Trump administration, Startup Tucson said.

The nonprofit group had used the annual funding of about $300,000 from the program to fund Thryve ScaleUp, an 11-week program that enrolled 10 to 15 growth-minded entrepreneurs in three groups per year to learn Silicon Valley-style growth techniques to build and grow their startups or high-potential established businesses.

Despite the funding halt, Justin Williams, founder and CEO of Startup Tucson, said the program was a “huge success” for the local business community and the 70-plus companies that participated so far.

With less than two years to apply their lessons, Thryve alumni companies have averaged a 54 percent increase in revenue, or a total of more than $6 million. They also increased hiring 47 percent, adding 73 new full- and part-time jobs overall, the group said.

But Startup Tucson will march on, with plans to continue Thryve ScaleUp as a fee-based service and trying to amp up sponsorships and fundraising, he said.

“This year, we’re going to be reaching out and generating a wider base of support — we need to replace $300,000 a year,” Williams said.

Startup Tucson makes its budget from sponsorships and earned revenue — things like ticket sales to events and enrollment in self-funded programs.

The group, which is a 501c(3) federal tax-exempt organization, also gets roughly $50,000 annually from the city of Tucson, as well as money and in-kind support from the Southern Arizona Leadership Council and other community groups.

“We’re responsible for building our own revenue, and there are organizations that believe in what we’re doing,” Williams said.

Though program changes for 2018 will be announced by October, Williams said Startup Tucson is looking to add a shorter, more-intensive entrepreneurship program, “Thryve Sprints,” which will include weekend-long intensive training sessions and focused one-week topic-based sessions.

Startup Tucson grew out of the national Startup Weekend movement in 2011, gathering entrepreneurs together for a weekend of mentoring and business pitches, narrowing down business ideas to a final pitch contest.

But the Tucson group ended its affiliation with the national Startup Weekend organization to offer Thryve Weekend, which allows all participants to develop their ideas to the end of the event, rather than just those voted to the finals by their peers.

“I wanted to build an event that allowed anyone who comes to get all the way through the event — you don’t get booted out,” Williams said.

“It’s a little more of a serious economic development event, it was intended to be such and it turned out exactly like that.”

Though details are still being finalized, the group may hold three or five Thryve Weekends a year, he said.

The new program, Thryve Sprints, already was in development before the SBA defunding announcement, as the result of a strategic program review launched in January.

Startup Tucson is looking for ways to serve more entrepreneurs, Williams said, noting that its mentoring approach can work for businesses at any stage of development.

“We’ve always had this goal that we wanted to deliver the content we’re doing to many more businesses — not as a revenue model but as a mission,” Williams said. “This mindset, this Silicon Valley, high-growth, customer-focused business mindset, is transformative.”

Since its founding in 2012, Startup Tucson has become a center of entrepreneurship in the Old Pueblo.

In 2014, Startup Tucson absorbed the former Gangplank Tucson co-working space, now CoLab Workspace, and became the home to IdeaFunding, a 20-year-old program that teaches entrepreneurs how to find capital to grow their companies.

In 2015, Startup Tucson held its first Tenwest Festival, a weeklong series of events focusing on innovation in arts, technology, communities and entrepreneurship, including Idea- Finding. This year’s Tenwest Festival is scheduled for Oct. 14-22, at various sites around town.

“I’ve been really encouraged buy the traction and the momentum that is building around Thryve and Startup Tucson,” said Hecker, a founder of IdeaFunding and a Startup Tucson mentor and supporter. “We’ve been making progress toward a knowledge-based economy, and it would be damaging if we lose that momentum.”

Hecker said it’s important that Tucson has a place to help homegrown businesses and he hopes Startup Tucson will get the support to continue and grow its programs.

“Our economy should not be based upon not just attraction but creation and retention of jobs, and this is a good investment,” he said.

For more information about Startup Tucson, Thryve and other programs, go to startuptucson.org

They pitch products developed over four weeks for a shot at $5,000.

After innovation pitch contest win, Trusting Connections has a shot a national award.

Local supporters must pony up $3 million in revenue guarantees.

Amanda Marburger, front, a junior marketing strategist for Nuanced Media, works out of the CoLab Workspace with her co-workers. CoLab is part of Startup Tucson, which has lost its funding due to federal cuts.

Adrian Lai, chief executive officer of Biz Eatz, works out of the CoLab Workspace located at 17 E. Pennington Street on August 1, 2017. Lai started working on his idea full-time in April. Thryve ScaleUp, a program run by Startup Tucson, has lost its funding due to cuts in the U.S. Small Business Administration. 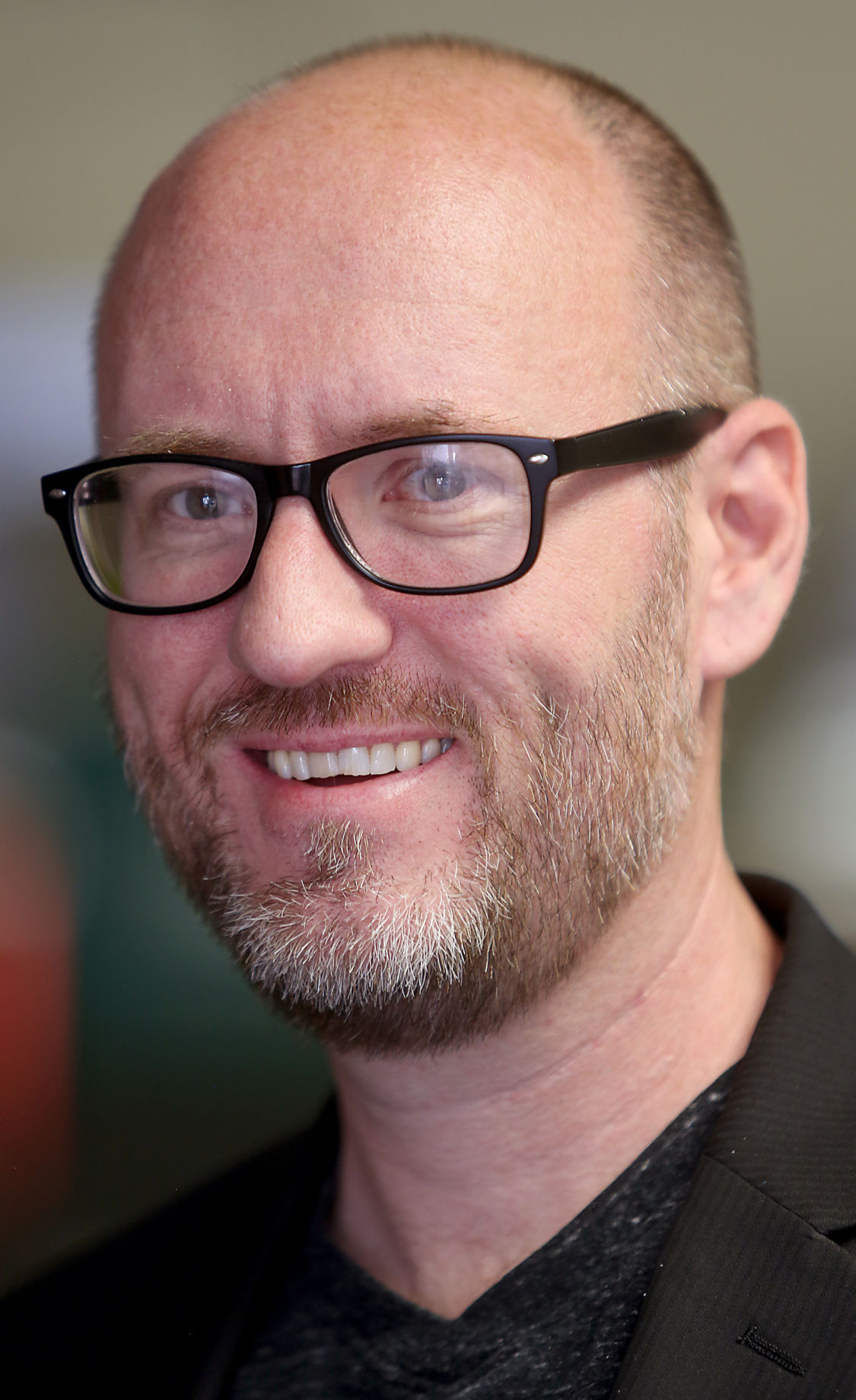