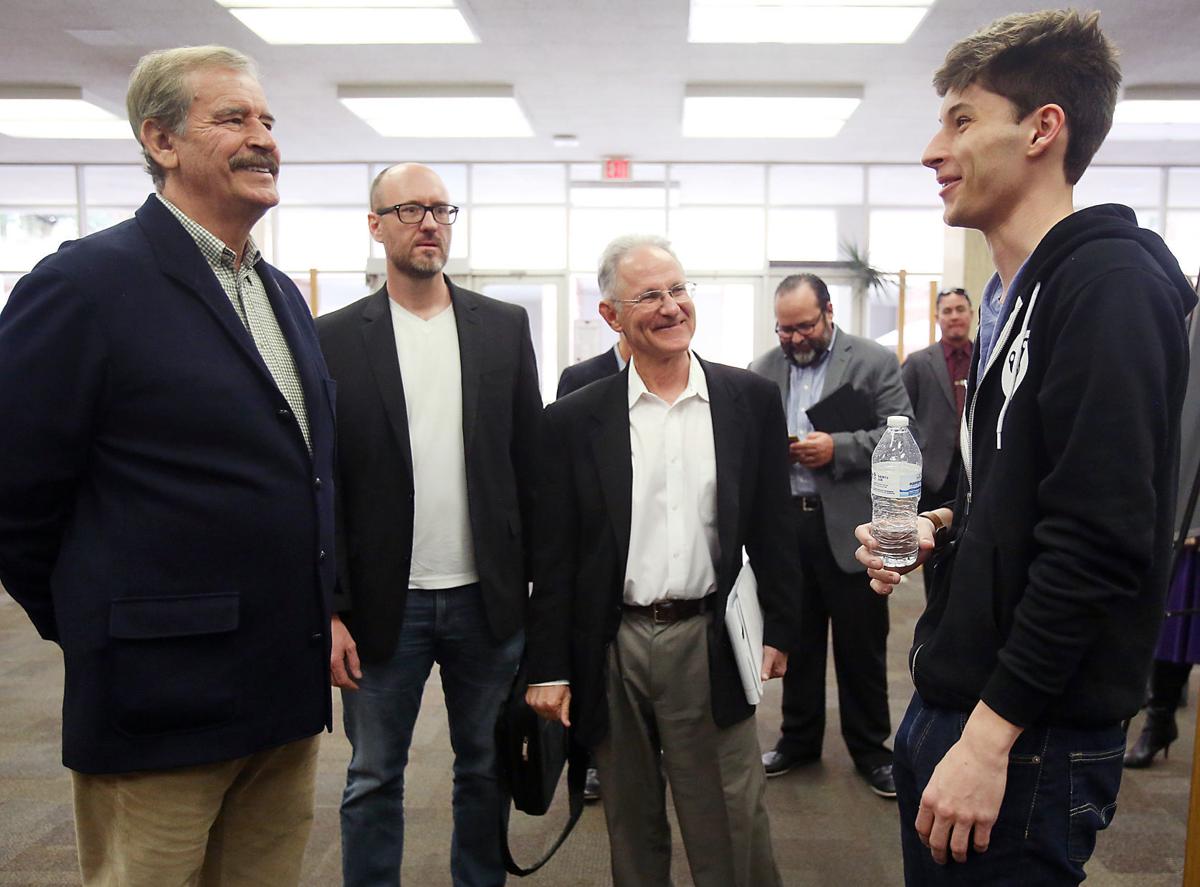 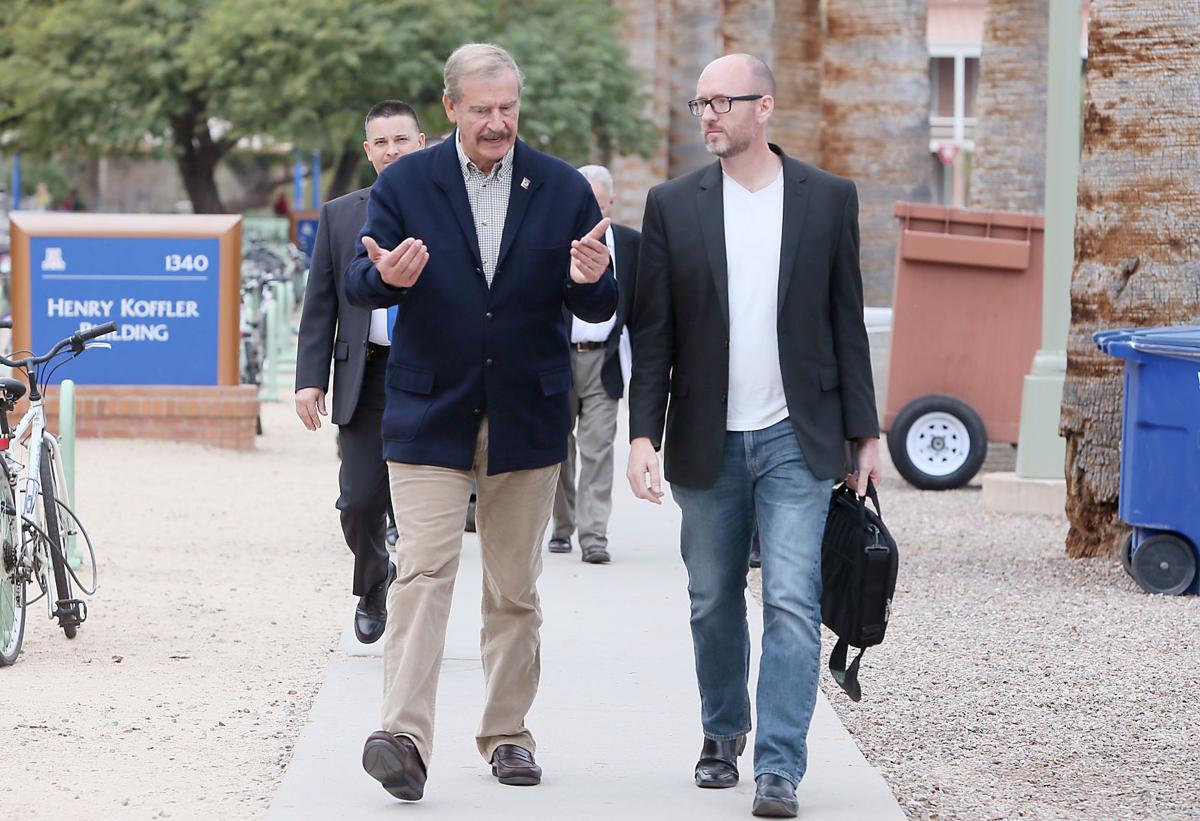 Former Mexican President Vicente Fox, left, talks with Justin Williams, director of Innovate UA, as they walk across the University of Arizona campus on Friday January 13, 2017. Fox was in Tucson to finalize his partnership with Startup Tucson.

In a whirlwind visit to Tucson, former Mexican President Vicente Fox signed an agreement to partner with the city on a project to incubate startup businesses and replicate a community college program south of the border.

The partnership was first proposed to Fox during a visit in Guanajuato, Mexico, in October, in which Tucson Mayor Jonathan Rothschild and Startup Tucson CEO Justin Williams led a delegation to ask for his assistance and extend an invitation to visit.

On Friday, Fox made good on the promise to visit and spent about 25 hours in town, touring Pima Community College, the University of Arizona, Visit Tucson and the spaceport, and he met with some startup tech companies in the area.

“I foresee Mexican companies setting up in Tucson and the city being a trampoline to the rest of the world,” Fox said during an interview before flying home Friday afternoon. “Tucson will be the platform to launch startups from Mexico who will come here to incubate and learn how to enter the world market.”

The aim of the pilot program is to identify Mexican companies poised to grow and export and mentor them in Tucson for up to two years on how to enter the global market.

The benefit to Tucson is it becomes the U.S. headquarters for these companies, and the benefit to Mexican businesses is the access to the experience of entrepreneurs who have come up through Startup Tucson.

Fox, who was Mexico’s president from 2000 to 2006, said it was a first-of-its kind partnership between the two countries.

He also plans to launch a two-year community college program at his foundation Centro Fox, with the guidance of PCC.

“This is a movement of hope,” he said. “We want to return optimism to the country.”

Fox lauded the mayor for his efforts to push the partnership.

“I’ve never met a mayor so involved on a personal level,” he said. “I am returning home very pleased and full of hope now that I’ve seen the many people who will be navigating this effort.”

The first step in the Startup Tucson Thrive Latin America program will be to identify potential entrepreneurs in Mexico and host a pitch event to select those who will come to Tucson for incubation.

The event will be held at Centro Fox in Guanajuato.

Now that the partnership is official, Tucson organizers will get to work on the logistics of hosting the Mexican entrepreneurs, Williams said.

“It was everything I hoped for,” he said of the visit with Fox, “it really was.”

The creation of a binational venture accelerator program will bring much attention to Tucson, Williams said.

“It’s unique because it gives us the opportunity to grow U.S. jobs,” he said. “This will get people’s attention and increase our ability to be more competitive.”

During the visit, Williams said, it became obvious that Fox shares Tucson’s desire to promote the similarities in the two regions.

“He genuinely believes in it,” he said. “This is an emotional investment for him, and I was happy to see that.”

Mexico does not have a community college system, which Fox said can serve a larger population and students who cannot afford university tuition.

“I was extremely pleased by President Fox’s visit to Tucson, and we accomplished the goals that we had hoped we would accomplish,” Rothschild said. “We set the foundation for staying the course of excellent international business relations with Arizona and Mexico.”

Since leaving public office, Fox and his wife, Martha, have dedicated their efforts to the Centro Fox foundation and supporting efforts to create educational and entrepreneurial opportunities for disadvantaged youth in southern Mexico.

“This is what we do,” he said. “We want to construct bridges, not create distance between our two countries.”

Fox was impressed with the relationship Tucson has fostered in northern Mexico.

“I want to duplicate that relationship in southern Mexico,” he said. “We are friends, we are neighbors, we are partners.”

A vocal critic of the U.S. president-elect, Fox deliberately avoided the topic during his visit in order, he said, to focus on the positive Startup Tucson-Centro Fox partnership.

During a visit to the UA campus, he met with several students from Mexico who spoke to him about their work in robotics and medical technology projects.

“Good for you for uplifting the Mexican flag,” Fox told them.

One of the students, Antonio Dias de Leon, was giddy after the visit.

“It was an honor,” he said. “He is a public figure that was the face of our country. Meeting him was impressive.”

The visit to Tucson was not his first to the city, but Fox said it had been many years.

“I was very surprised by the growth, especially downtown,” Fox, 75, said. “I look forward to returning on a regular basis now that this partnership has been formalized.

“But, next time I want to stay longer.”

‘Modernize’ NAFTA, Mexico’s new ambassador to US says in Tucson

Restoring a guest-worker system could address concerns about illegal immigration.

Suspiros Pastelerías, based in Hermosillo, Sonora, has 263 shops throughout Mexico.

We've collected a few front pages from newspapers.com to give you a look at some January 14 papers in history. With a subscription to newspape…

Change in leadership comes as the city struggles to pay its bills.

What happens to cars after Barrett-Jackson? Many stay in Arizona

The mayor wasn't hurt. His city-owned Prius was later found, but the carjacker remained at large.

For most, it is their sole source of income.

Mexican officials promote the preservation and modernization of treaty.

Mesa sets its eyes on e-commerce with Mexico

The Arizona city is working to increase direct trade with Mexico.

Former Mexican President Vicente Fox, left, talks with Justin Williams, director of Innovate UA, as they walk across the University of Arizona campus on Friday January 13, 2017. Fox was in Tucson to finalize his partnership with Startup Tucson.