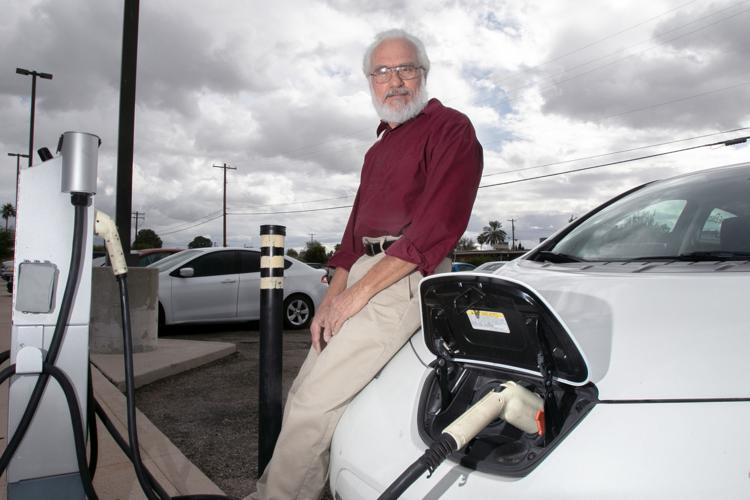 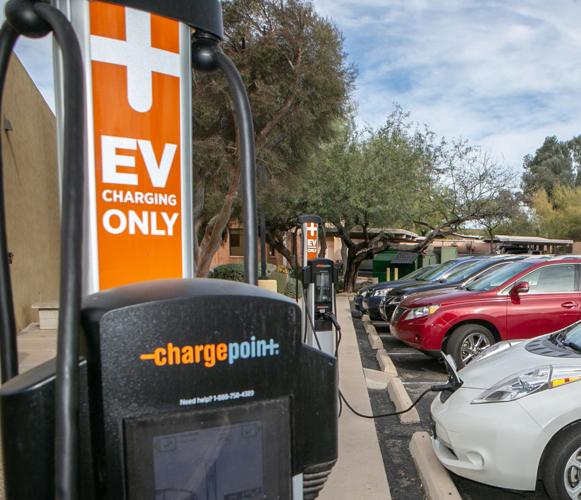 The AAA Arizona office on North Oracle Road offers electric-vehicle charging. The stations proposed by the group may resemble these existing spaces. 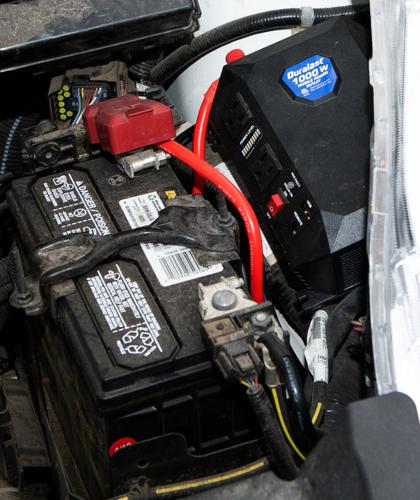 In a move that would make owning electric cars more affordable and convenient for Tucsonans, Tucson Electric Power Co. is proposing to spend $10 million on electric-vehicle incentives and charging stations.

Responding to a request from state regulators, TEP has proposed spending more than $2 million on new incentives to install home charging systems, and investing $8 million on public charging station infrastructure.

TEP has proposed an incentive of up to $500 for electric-vehicle (EV) owners to install home charging systems and a $100 incentive for homebuilders for each new home they pre-wire for EV charging.

The utility also plans to issue a new incentive rate plan for ratepayers to charge their EVs at home during off-peak periods, according to a proposal TEP filed with the Arizona Corporation Commission.

The ACC is working on a statewide EV policy that could be discussed at its next regular open meeting on Dec. 17 as part of a larger effort to modernize Arizona’s energy policies to advance cleaner power technologies.

Besides the mandate from regulators, TEP is looking to better serve its customers as EV sales increase and automakers roll out new electric models, a spokesman for the utility said.

“We’re trying to look at this from the customer’s perspective, and as interest increases, we want to make it as convenient as possible, because that certainly has been an issue of whether people buy an EV or not,” TEP’s Joe Barrios said.

TEP has offered a 5 percent discount during off-peak hours under a time-of-use rate for several years, but only about 100 customers use the rate, Barrios said.

The utility expects to file formal rates after the Corporation Commission’s approval of its overall EV plan, Barrios said.

While details are still pending, Barrios said the EV time-of-use plan would likely include discounts on off-peak hours, such as midmorning to midafternoon when most customers are at work, or overnight.

“It wouldn’t necessarily be overnight, it could be when solar production is high to take advantage of that, because that usually comes earlier in the day,” he said, adding that making better use of solar power can help reduce peak power demands.

“If it helps reduce costs, that’s beneficial to all customers, even if you don’t have an EV,” Barrios said.

TEP’s plans for investment in public EV charging systems focuses on installations at workplaces, apartments, in neighborhoods, and on university campuses, including supporting the electrification of commercial fleets.

Details are not yet finalized, but the program could include TEP-owned chargers, third-party chargers or a combination of both, Barrios said.

Regulators have asked for EV proposals from TEP as well as from Arizona Public Service Co., the largest state-regulated utility, as well as from the state’s electric cooperatives.

APS has filed a proposal to start a $1.1 million pilot program to own and operate its own EV charging stations.

“Anything along the lines of incentives that could happen, I would like,” said Dave Gebert, president of the roughly 40-member Tucson Electric Vehicle Association and the owner of a 2015 Nissan Leaf plug-in EV.

“I’m on the fence on that — in 10 years, is TEP a competitor I want to see in the market, with their deep pockets and their regulated monopoly?” Gebert said. “Right now, I’d like to see everybody in the market, to make it easier for people to have EVs, but what is this going to lead to?”

Robert Bulechek, a Tucson energy-efficiency consultant and Leaf owner, said he’s in favor of incentives to drive EV adoption, citing the benefits of zero tailpipe emissions as Tucson has marked several high-ozone days in the past year.

Bulechek, who wired his own 240-volt charging system at home, said the proposed incentive to install home charging systems – 75 percent of the cost up to $500 – will cover much of the cost for homeowners with main electrical circuit boxes in or near their garages, though for others the cost of running a new circuit could be closer to $2,000.

“It’s nice to be able to make those retrofits,” said Bulechek. “I think they got lots of this right.”

Regulators have signaled they will examine the charger ownership issue closely.

Though they can’t comment on pending cases, Commission members Bob Burns and Justin Olson have filed letters asking for more information about the utilities’ plans.

TEP’s plan would use energy-efficiency funding supported by existing bill surcharges to pay for $450,000 in administration costs for the charging-system program and $300,000 for systems to manage public chargers.

TEP has proposed using energy-efficiency funding for initial parts of the $8 million in investment in charging infrastructure.

But the Corporation Commission staff opposes that idea and wants TEP to recover its costs later in a full rate case, like it normally would for power plants or other infrastructure.

Arizona is among a growing number of states that are looking to set new EV policies, after California set aggressive rules to adopt zero-emission vehicles including EVs more than a decade ago.

If anything, Arizona is a little late to the party, said Katherine Stainken, Prescott-based policy director for Plug In America, a nonprofit group that promotes EVs.

Stainken said power companies are looking at EVs as a source of future revenue growth as demand continues to be stagnant after falling in the Great Recession.

“With all the energy-efficiency (advancements), there’s just less demand, and they have all these substations and transmission lines they still need to maintain,” she said.

The role utilities play in rolling out EV charging stations has been the subject of much debate, Stainken said.

“That is a conversation that is taking place at commissions across the country,” she said. “We clearly see this is a collaborative effort by a lot of different people, and without the utilities it won’t go far.”

TEP also has proposed spending $95,000 to support the Regional Electric Vehicle Program, known as REV West, a consortium of Western states including Arizona that have pledged to develop a system of EV chargers along major travel corridors.

Bulechek said more education is needed to make people aware of the financial benefits of EVs.

Though prices for EVs start at about $30,000 for a new Leaf to $75,000 for the high-end Tesla models, Bulechek noted that the average new-car price is now about $35,000, and maintenance costs are much lower without a gas engine.

According to the U.S. Department of Energy the cost of charging an EV ranges from about one-half to as little as one-third of the cost of fueling a gas car, depending on local electric rates and gas prices.

At the end of 2017, there were 13,901 electric cars registered in Arizona, including about 7,600 battery-only cars and 6,300 gas-electric hybrids that can be plugged in to charge, according to the Alliance of Auto Manufacturers. Local data was not immediately available.

That represents only about two-tenths of 1 percent of the nearly 6 million registered vehicles in Arizona, but that is likely to grow as electric vehicle sales rose 31 percent from 2016 to 2017, according to data from the Auto Alliance.

The Tucson Hispanic Chamber of Commerce has a new leader

President and CEO Lea Marquez Peterson decided not to return to the chamber after her loss in the race for the U.S. House in Congressional District 2.

Tucson economic growth expected to be strong through 2019

But after some of the biggest job gains in decade, the local economy may slow down by 2020, University of Arizona economists say.

But the Arizona Corporation Commission didn't get around to voting on a Tucson Electric Power energy-efficiency plan that includes electric vehicle incentives.

Effective ban on natural gas plants is extended to August.

The AAA Arizona office on North Oracle Road offers electric-vehicle charging. The stations proposed by the group may resemble these existing spaces.