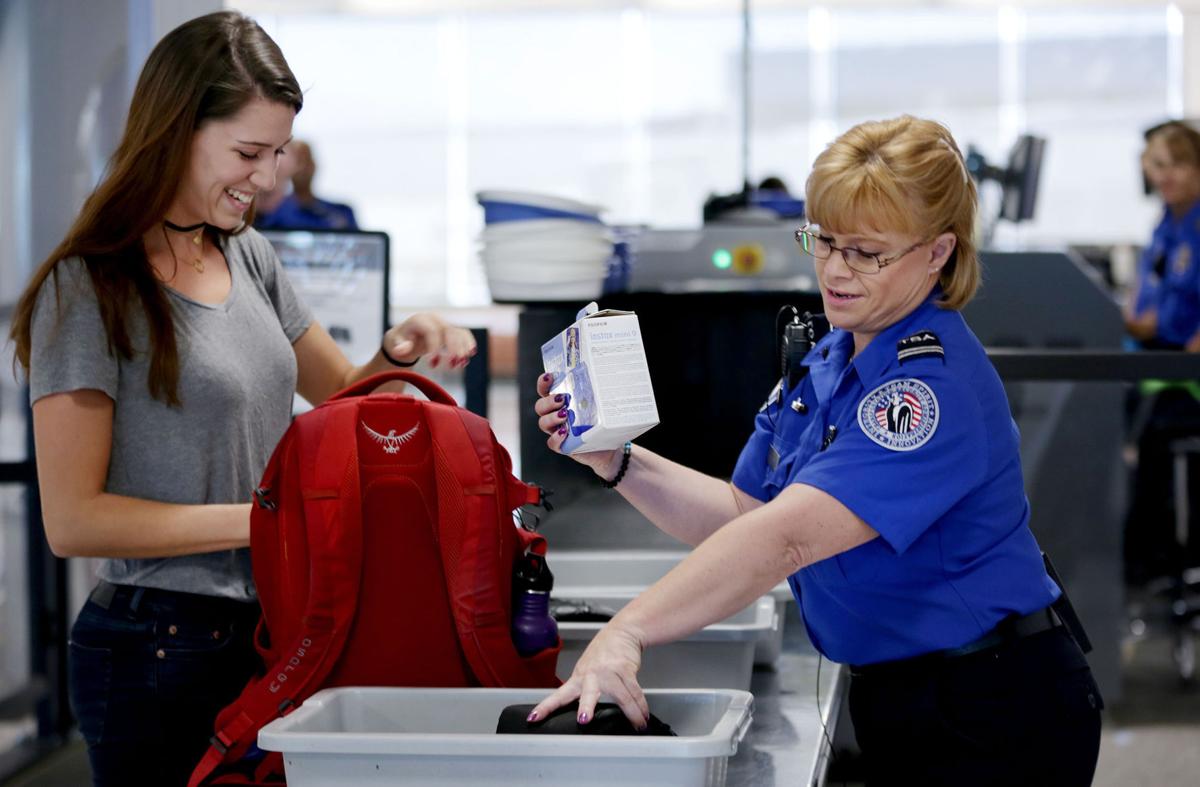 Michelle Ankrum, a Transportation Security Administration lead officer, sets a passenger’s Fujifilm instant camera and another camera into a bin for screening at the “A” terminal security checkpoint at Tucson International Airport. 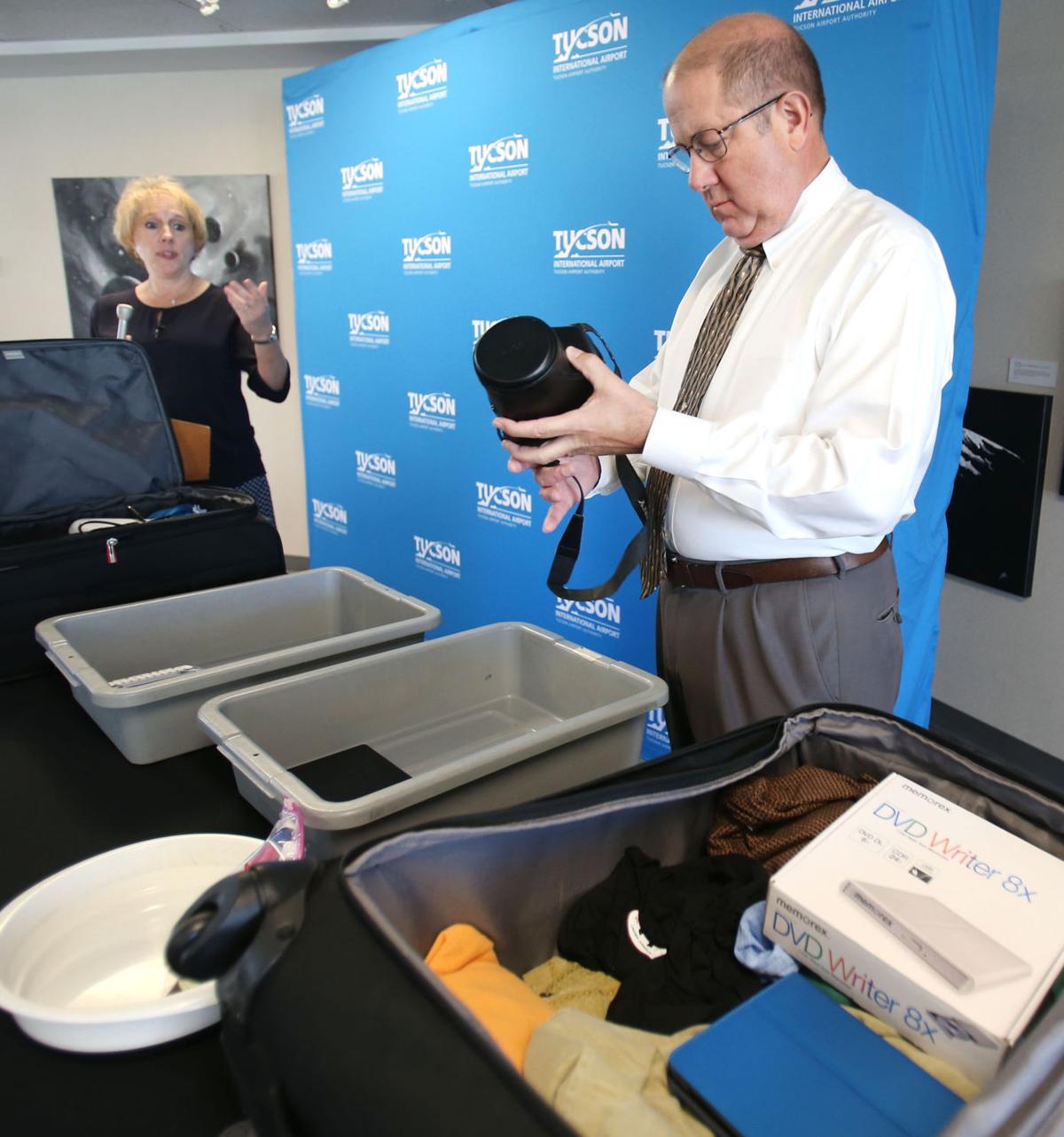 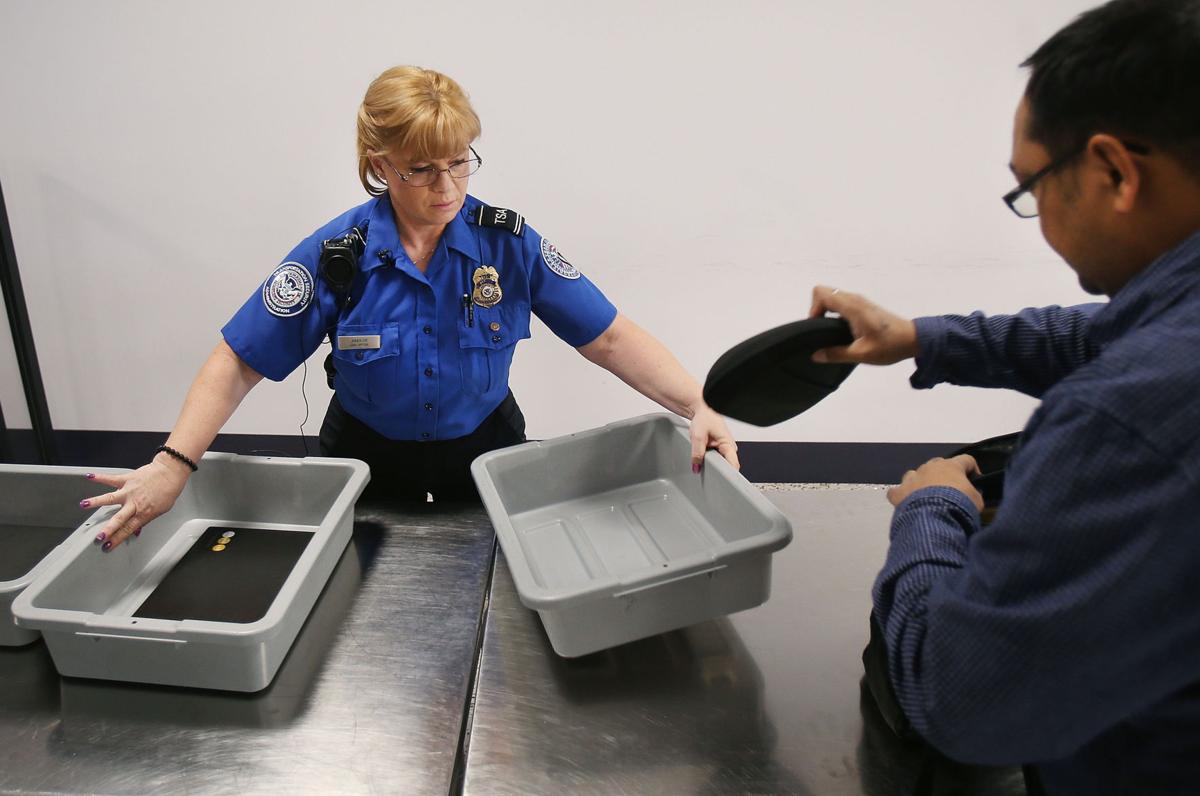 Michelle Ankrum, left, a Transportation Security Administration lead officer, helps a passenger load his electronic devices into bins for screening at the “A” terminal security checkpoint at Tucson International Airport on Oct. 24, 2017, in Tucson, Ariz. New Transportation Security Administration screening procedures dictates all electronic devices larger than a cell phone must be placed in x-ray bins.

Travelers leaving Tucson International Airport now have a little more work to do in order to navigate quickly through security checkpoints after new policies mainly aimed at electronic devices went into effect at TIA on Tuesday.

The changes by the U.S. Transportation Security Administration — notably including a new requirement that tablet PCs and most electronic devices bigger than a cellphone be placed in X-ray screening bins — arrived in Tucson after an 18-month pilot program at 10 airports, including Phoenix Sky Harbor International.

The new rules, which don’t change what items passenger are allowed to take on planes, already are in place at most Arizona airports and will be rolled out nationwide in the coming months, the TSA said.

The enhanced security procedures don’t apply to passengers enrolled in TSA’s PreCheck program, which offers special, expedited screening for travelers who have gone through background checks and paid a fee, when PreCheck lanes are open.

The new rules help screeners get an accurate X-ray view of electronic items to thwart an evolving terrorist threat, TSA spokeswoman Lorie Dankers said during a demonstration at the airport on Tuesday.

“Intelligence indicates that terrorist groups continue to target commercial aviation, and we know they are aggressively pursuing innovative methods to disrupt the aviation system by finding ways to smuggle explosives in various consumer items, with a focus on electronics,” Dankers said.

“These changes will raise the baseline aviation security across the United States,” she said, noting that the new rules represent the first major change to the screening process in more than a decade.

The biggest change, she noted, is that all electronic devices bigger than a cellphone, or about 4 inches by 6 inches, must be placed separately in bins with nothing on top or beneath them, though more than one such device can be placed in the same bin side by side.

The new procedure — which has been used for laptop computers for years — now also applies to iPads or other tablet computers, e-book readers, portable speakers, game consoles and most items larger than a phone with electronic circuitry, especially devices with removable or rechargeable batteries.

There is no current requirement that passengers be able to power up their devices as part of the screening process, Dankers said.

Electronics generally must be placed in bins out of their bags or cases, though they can be kept in so-called “checkpoint friendly” cases, like thin e-reader covers or sleeves with no exterior pockets , she said.

Electronic devices still allowed in carry-on bags, such as power cords, should be neatly packed with cords coiled and fastened so X-ray screeners can easily see them and avoid a hands-on bag check, Dankers said.

The TSA is also now requiring passengers to put liquids such as soaps — limited to 3 ounces each and bagged in a quart-size resealable clear bag under the TSA’s so-called 3-1-1 rule — in single screening bowls or bins rather than keeping them in carry-on bags.

The new procedures increased security screening times during the pilot program, but once TSA officers and passengers became accustomed to them, delays became negligible, Dankers said.

“Any increase in wait time goes away over time,” she said.

Screening officers initially will be stationed at the beginning of the screening area, instructing passengers on how to comply with the new rules, she noted.

The best way for passengers to avoid delays is to pack smart, with electronics you’ll need to pull out on top, Dankers said.

“A prepared passenger is going to have a more successful trip through security,” she said.

Go to https://www.tsa.gov/travel/security-screening/whatcanibring/all for more information.

Positions to be filled include medical professionals, administrative staff.

Crews are working on fixing the problem.

American Airlines to offer nonstop between Tucson and Charlotte, N.C.

Michelle Ankrum, a Transportation Security Administration lead officer, sets a passenger’s Fujifilm instant camera and another camera into a bin for screening at the “A” terminal security checkpoint at Tucson International Airport.

Michelle Ankrum, left, a Transportation Security Administration lead officer, helps a passenger load his electronic devices into bins for screening at the “A” terminal security checkpoint at Tucson International Airport on Oct. 24, 2017, in Tucson, Ariz. New Transportation Security Administration screening procedures dictates all electronic devices larger than a cell phone must be placed in x-ray bins.