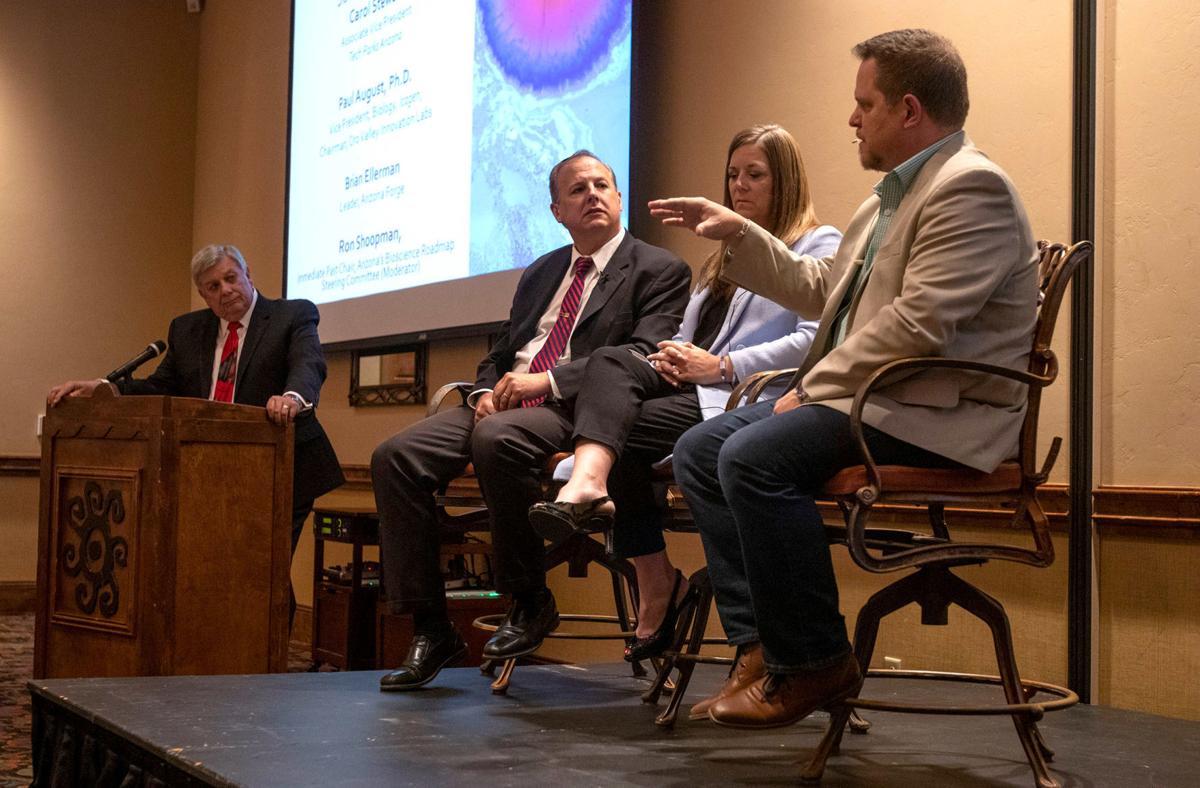 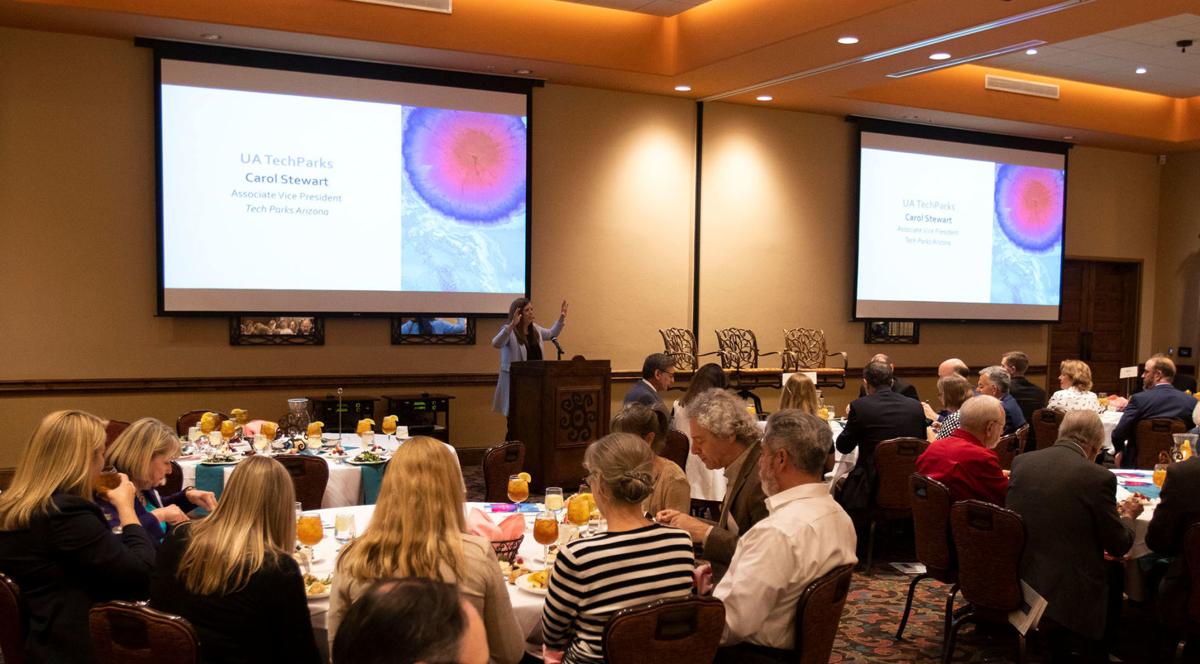 Participants in the Tucson science community gather for the Arizona Biosciences Roadmap luncheon. Backed by the Flinn Foundation, the meeting is meant to bring various bio-scientific fields together to discuss ways to improve quality of life in Arizona.

There was plenty of talk about the recent progress Arizona is making to build an entrepreneurial ecosystem for bioscience companies — with some fresh faces leading the charge, at the Tucson edition of Arizona’s Bioscience Roadmap annual luncheon Wednesday.

Sponsored by the Flinn Foundation, a Phoenix-based nonprofit, Arizona’s Bioscience Roadmap is a plan hatched in 2002 to grow the bioscience industry in Arizona. The initial 10-year plan was updated to stretch into 2025.

The roadmap focuses on specific ways to grow the bioscience industry in Arizona, including increasing private investment and access to venture capital, fostering entrepreneurship, partnering with the state’s universities and building a base of talent.

Though state employment in bioscience rose 58 percent from 2002 to 2016 and gains have been made in university-based bio startups, patents and licensing, Roadmap studies have found challenges, including a chronic lack of venture capital and limited resources for bio startups.

That is starting to change in Tucson, said speakers including Carol Stewart, who was named associate vice president of Tech Parks Arizona in January.

Stewart came from a rich background in university technology commercialization at the University of Waterloo in Ontario, Canada, a major engineering school that in the 1990s helped incubate Research In Motion Ltd., which developed the Blackberry as one of the first internet-connected smartphones.

The Waterloo incubator spawned another billion-dollar company, the instant-messaging app firm Kik Interactive, and the school now has seven student startup incubators with 800 to 1,000 startups in development at any given time, Stewart said.

She said the Tucson area has a lot going for it, with top-level support from the Board of Regents and UA President Robert Robbins and new efforts to build startup resources.

Effective startup environments are built up over time, but the UA and Tucson can make some moves to accelerate the process, she said.

“We obviously have a lot of amazing things that are bubbling up right now,” Stewart said. “There is an organic process to how those ecosystems grow, but I think we can leapfrog it by about five years if we really pay attention and we really get organized and we collaborate.”

During a panel discussion on business incubators, Stewart said when she was considering the UA Tech Park job she found Tucson has some valuable startup assets.

“It’s all the groundwork for a really exciting time for Tucson — all the right ingredients are here. I think we need to collaborate and be very purposeful as we move forward,” Stewart said.

But Ellerman said more collaboration and leadership is needed, and he hopes Arizona Forge, which is expected to open in the Roy Place building downtown later this year, will help bridge the gaps.

“We’re trying to build a support system, from idea to market and all the steps in between,” Ellerman said.

Another panelist was Paul August, a vice president at the drug-development technology company Icagen Inc. in Oro Valley and chairman of Oro Valley Innovation Labs, an incubator expected to break ground at Innovation Park later this year.

The new incubator will provide support and room for entrepreneurial scientists at places like Icagen and neighbor Roche Tissue Diagnostics to grow startups, noting that the Arizona Center for Innovation at the UA Tech Park on Tucson’s southeast side is too far.

“One of the critical things about starting a company is, it’s not only to have that lab space, but to also have that proximity,” August said.

He noted that Boston, a main bioscience hub, has more than 35 bioscience incubators in the area, including some seeded by local cities.

August said the Oro Valley incubator is still about $75,000 short of its $315,000 fundraising goal to start construction on its Innovation Park building, but he’s optimistic it will be raised this year.

If Tucson is to become a leader in the bioscience or tech business development in general, it also needs more raw material — students and faculty with marketable inventions.

“It’s a funnel — you need the masses at the top to have the winners at the bottom, and right now, we need to create that mass,” Stewart said.

The head of the Flinn Foundation said she feels the momentum for startup collaboration is growing in Tucson.

“It takes a community, and I think that’s what you have here in Tucson, a real community to propel that bioscience ecosystem,” said Tammy McLeod, president and CEO of the Flinn Foundation.

Mark Slater, who was named the new chair of the Arizona’s Bioscience Roadmap Steering Committee in February, said the 100-plus member committee is planning to take a more hands-on approach to its effort.

“The progress over the last decade has been truly astounding,” he said, adding that new, focused efforts are needed to keep the momentum going.

The contradiction at the heart of Gov. Doug Ducey's Mexico policy was bound to cave in on itself eventually.

As recently as a few years ago, if you were reading headlines that boasted of new technologies, start-ups or tech job growth, chances were that a traditional coastal enclave like San Francisco, Seattle or Boston could take credit.

Participants in the Tucson science community gather for the Arizona Biosciences Roadmap luncheon. Backed by the Flinn Foundation, the meeting is meant to bring various bio-scientific fields together to discuss ways to improve quality of life in Arizona.