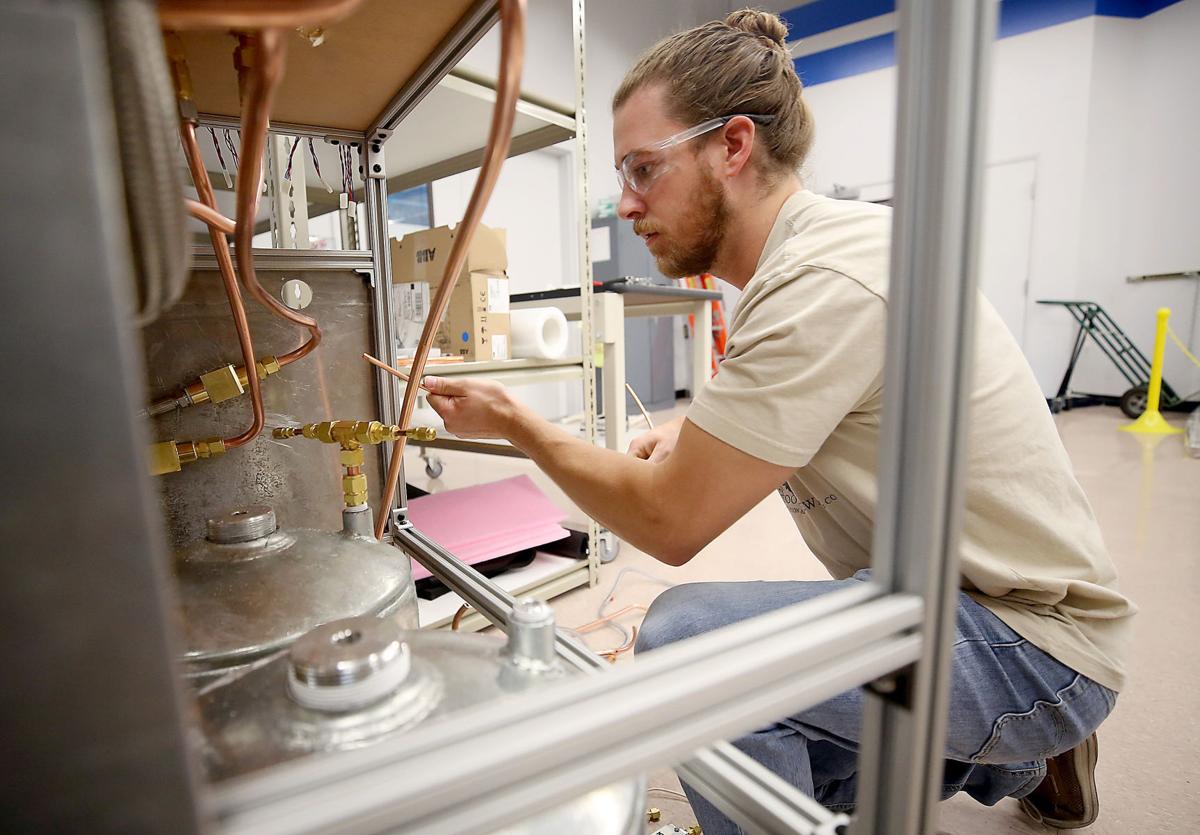 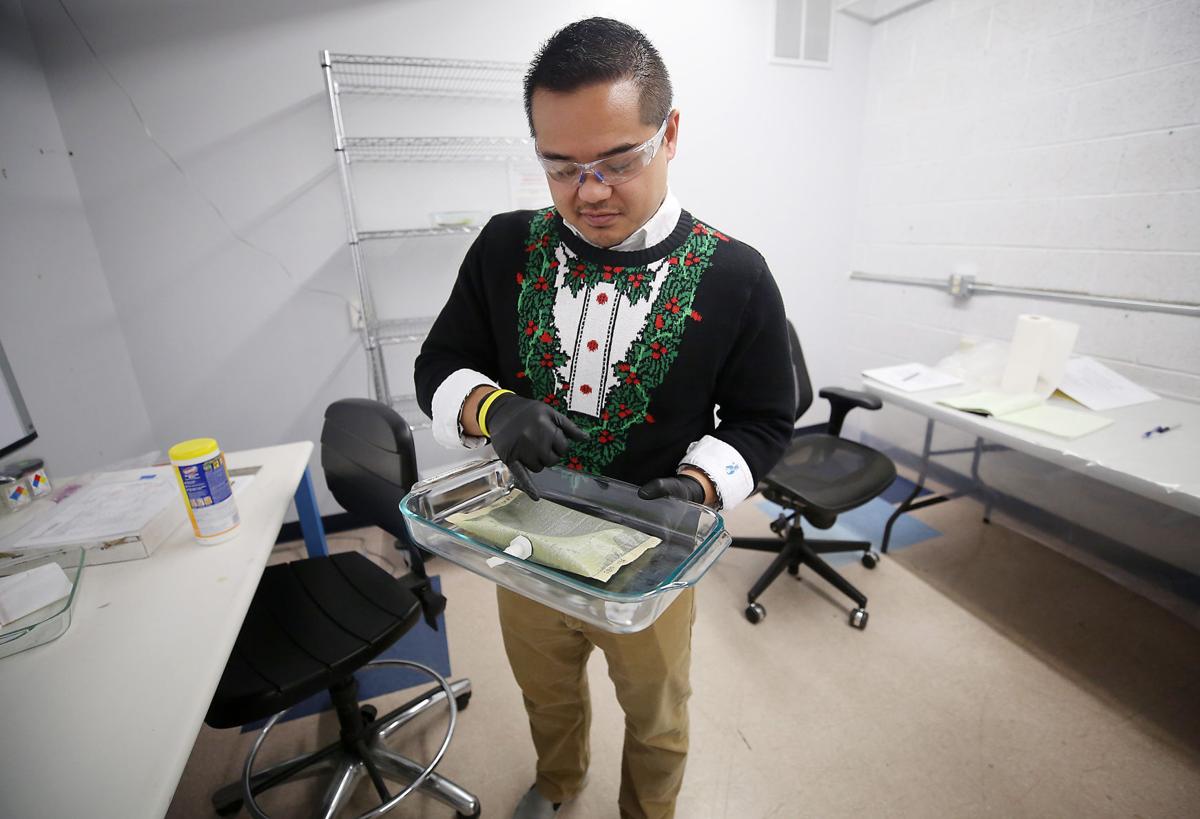 Patrick Pasadilla shows a simulated space urine sample. Paragon has worked on life-support systems for the Orion manned craft being developed by NASA. 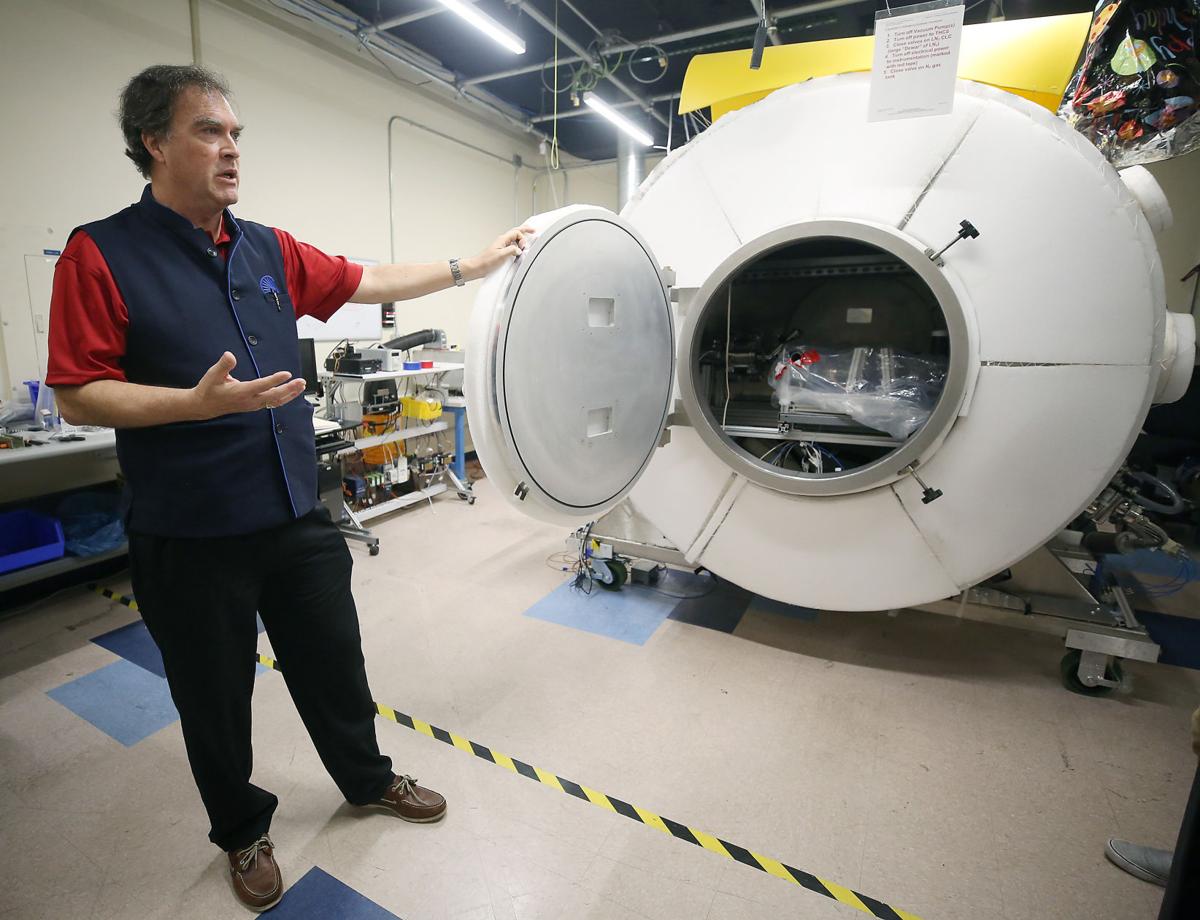 While new technologies and a wave of private spaceflight ventures have created a so-called “New Space” industry, one Tucson company is going strong more than two decades after starting out in the space business.

Tucson-based Paragon Space Development, a maker of life-support and thermal control systems for spacecraft, is not only thriving as a resurgent NASA looks to resume human space exploration, but it’s looking to ride the swelling wave of private space development as well.

“I joke that we’re the grandfather of New Space in Tucson,” said Grant Anderson, Paragon’s co-founder, president and CEO.

Private contractors have helped NASA launch space vehicles since the agency’s inception, but the new commercial space industry really began to blossom about a decade ago, when NASA began encouraging private launch providers.

Since then, space-launch firms like Elon Musk’s SpaceX have launched numerous payloads to supply the International Space Station and to put commercial and government satellites into orbit.

More recently, startups like Tucson-based Vector have been working to perfect small rockets to place micro-satellites into orbit to meet a huge unmet demand for such launch services.

Paragon itself fostered what could be considered a New Space company, though its vehicles don’t quite reach space.

In 2013, Paragon co-founders Jane Poynter and Taber MacCallum spun off startup World View Enterprises , which developed a system of steerable, balloons that can ascend to the stratosphere for tourism flights and as an lower-cost alternative to geostationary satellites for commercial applications like Earth imaging.

The new space ventures provide new opportunities to Paragon, which since its founding in 1993 has established itself as a key provider for life-support, environmental and thermal control systems for NASA, the U.S. military and major contractors including Boeing, Lockheed Martin and Raytheon.

The company’s first project for NASA was an aquatic ecosystem — essentially a fish tank — that went up on the space shuttle in 1996 and later flew on the Russian space station Mir and the International Space Station.

Paragon later became a key partner of Lockheed Martin, providing life-support systems for projects including the Orion manned spacecraft, which has been in development since the early 2000s and scheduled for its first manned flight by 2021.

Continuing its work on numerous NASA and defense programs, and the company is on a trajectory of growth after inking several key developments in 2017:

In May, Paragon announced a teaming agreement with aerospace giant Honeywell under which the two companies will design, build, test and deploy environmental control and life-support systems for future human NASA and commercial programs.

Also in July, the Navy awarded Paragon a small-business research contract to develop systems to control heat on batteries that power electric propulsion and weapons systems.

In September, Paragon announced it was partnering with Stinger Ghaffarian Technologies — one of NASA’s biggest engineering services contractors — on a NASA multitask contract that funds on-demand engineering work for the International Space Station. The contract is worth up to $500 million over five years, spread over many tasks and contractors.

GROWTH, IN ALL WAYS

Anderson said Paragon — which landed on the Inc. 5000 list of the nation’s fastest-growing companies in 2013 — has revenues in the $5 million to $10 million range and grew revenues by 20 percent this year. He expects similar growth in 2018.

While focusing on its core life environmental, life-support and thermal control businesses, Paragon has stepped into non-space industries, including developing a hazardous-materials dive suit for the Navy for use in contaminated waters and an air-purification system for emergency refuge chambers in underground mines.

The World View spinoff reflects Paragon’s strategy to focus deeply on a core array of technologies, and to spin off other developmental ventures, Anderson said.

“We’re probably the most focused, unfocused company you can get,” he said.

World View was essentially incubated at Paragon and the companies still work together, Anderson said. Poynter and MacCallum still have ownership stakes in Paragon, which is closely held by 11 co-founders and investors.

Paragon was the lead contractor and developer of a special pressurized spacesuit worn by Google executive Alan Eustace on a record-setting human high-altitude flight in 2014, with World View providing the flight systems and later acquiring the technology.

While World View has flown off on its own, Paragon is busy developing, fabricating, testing and assembling an array of systems at its 26,000-square-foot headquarters on Tucson’s south side, featuring dry and wet laboratories, a vacuum test chamber, a full machine shop and a clean room.

The company employs about 50 people, more or less depending on contract work, and its payroll includes several University of Arizona engineering graduates, Anderson said.

Anderson said Paragon is constantly trying to adapt the latest technologies to its systems, showing off a “cold plate” the company is developing as part of the Navy battery-cooling project, an intricate latticed structure made with advanced 3-D printing.

Another example is the company’s patented adaptation of a technology to fuse metal, known as friction stir welding, to bond thin extrusions into highly efficient aluminum radiator panels for spacecraft.

In November, Paragon was awarded the Innovator of the Year for small companies in the Governor’s Celebration of Innovation for its XRad radiator system.

In September, Paragon won a Copper Cactus Nextrio Award for Innovation from the Tucson Metro Chamber for its work on a water-purification system expected to fly to the International Space Station in 2019, under a $5 million NASA contract awarded in 2016.

Paragon says its patented technology can extract more than 99 percent of contaminants from urine that is already treated and recycled on the space station, a significant leap from the current system that will save NASA significant transport and waste costs.

Beyond Paragon’s current contract work, Anderson said the teaming agreement with Honeywell could lead to big things in the future.

In announcing the agreement, a Honeywell executive said the partnership comes at an opportune time of renewed interest in developing a deep-space habitat needed to reach the moon and Mars, citing the extended reach of unmanned spacecraft.

“Unmanned achievements are now giving way to long-distance and long-duration human missions,” said said Marty Sheber, Honeywell vice president for space. “The technology developed by Honeywell and Paragon will give humans the opportunity to explore space for longer periods than ever before.”

Anderson said the agreement, which allows either company to act as subcontractor to the other as it makes sense, will enable the companies to provide integrated systems to NASA .

“We are competing against other billion-dollar companies — we need the 800-pound gorilla in the room,” he said.

Contract for International Space Station work could be worth up to $500 million.

Paragon Space Development and SunDanzer Refrigeration have teamed up on the project.

The new investment will help fund development of the company's rockets to launch small satellites into space.

Patrick Pasadilla shows a simulated space urine sample. Paragon has worked on life-support systems for the Orion manned craft being developed by NASA.