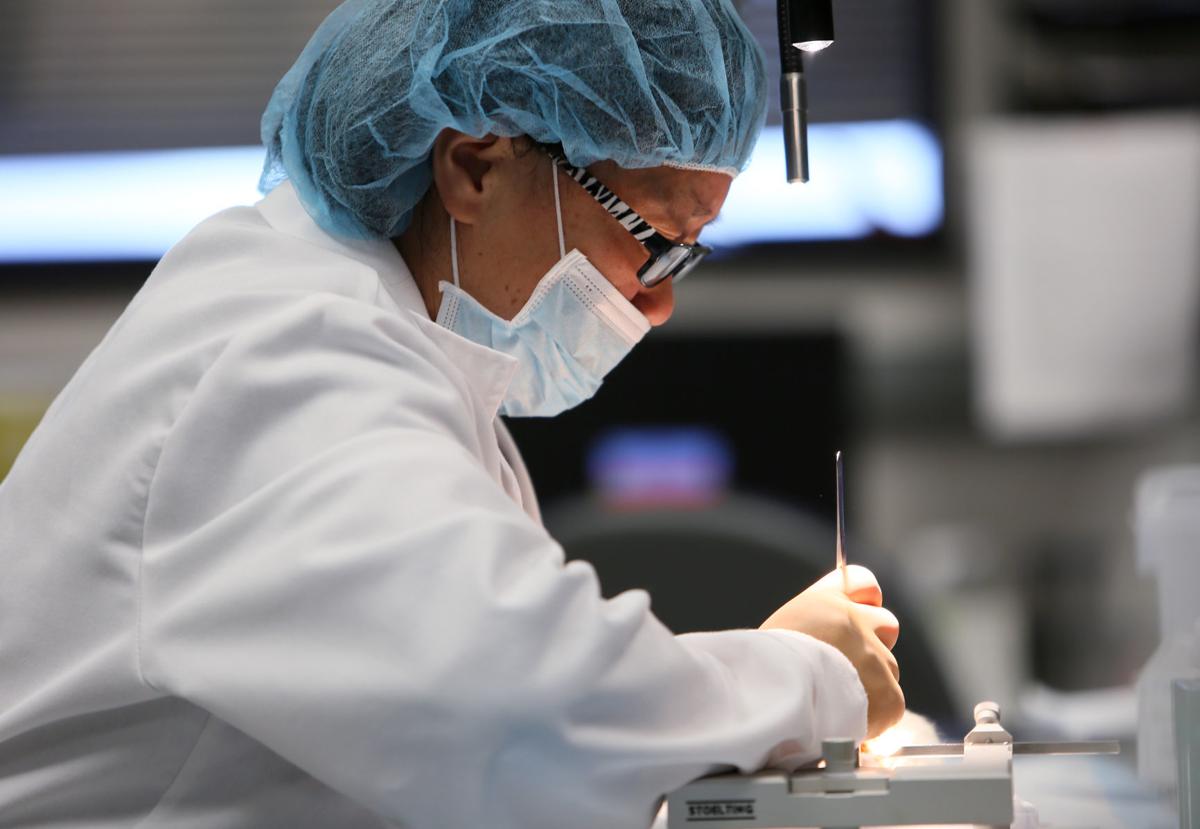 A worker at Regulonix, a drug startup commercializing a new kind of non-opioid painkiller and one of UAVenture Capital’s first investments. 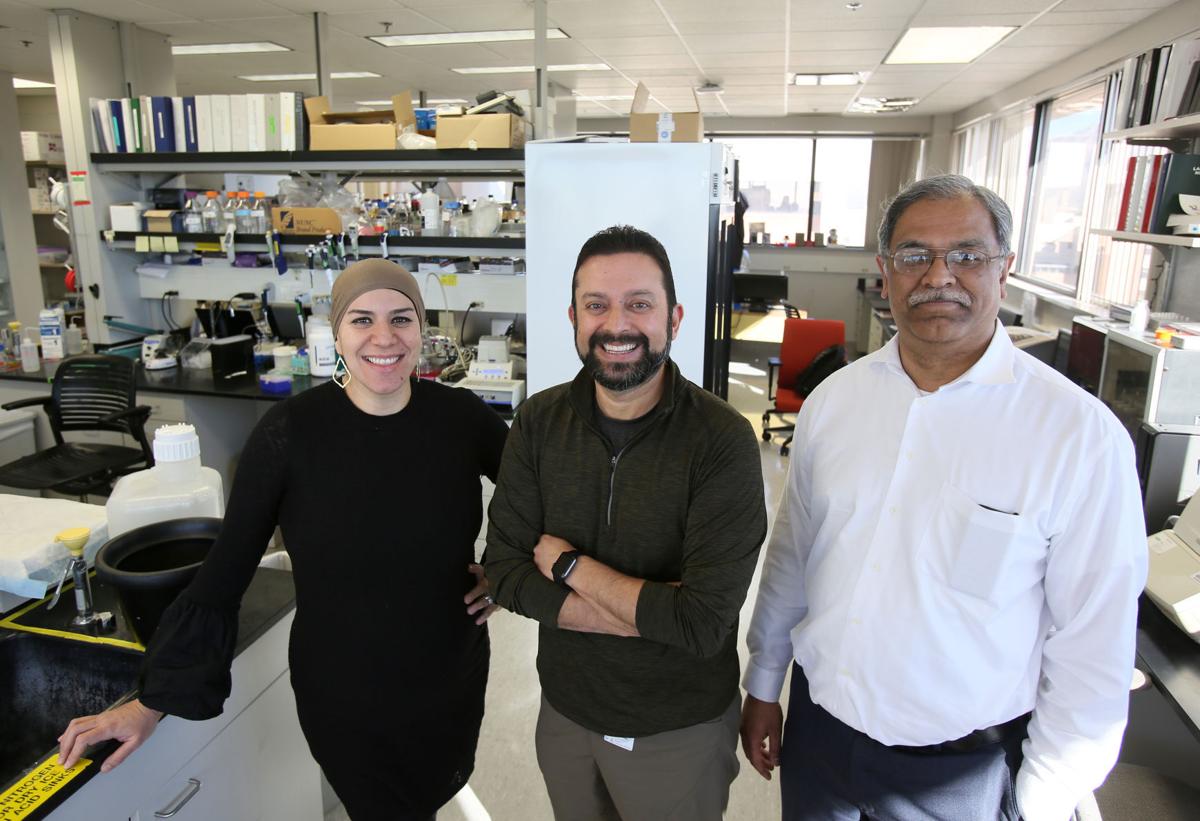 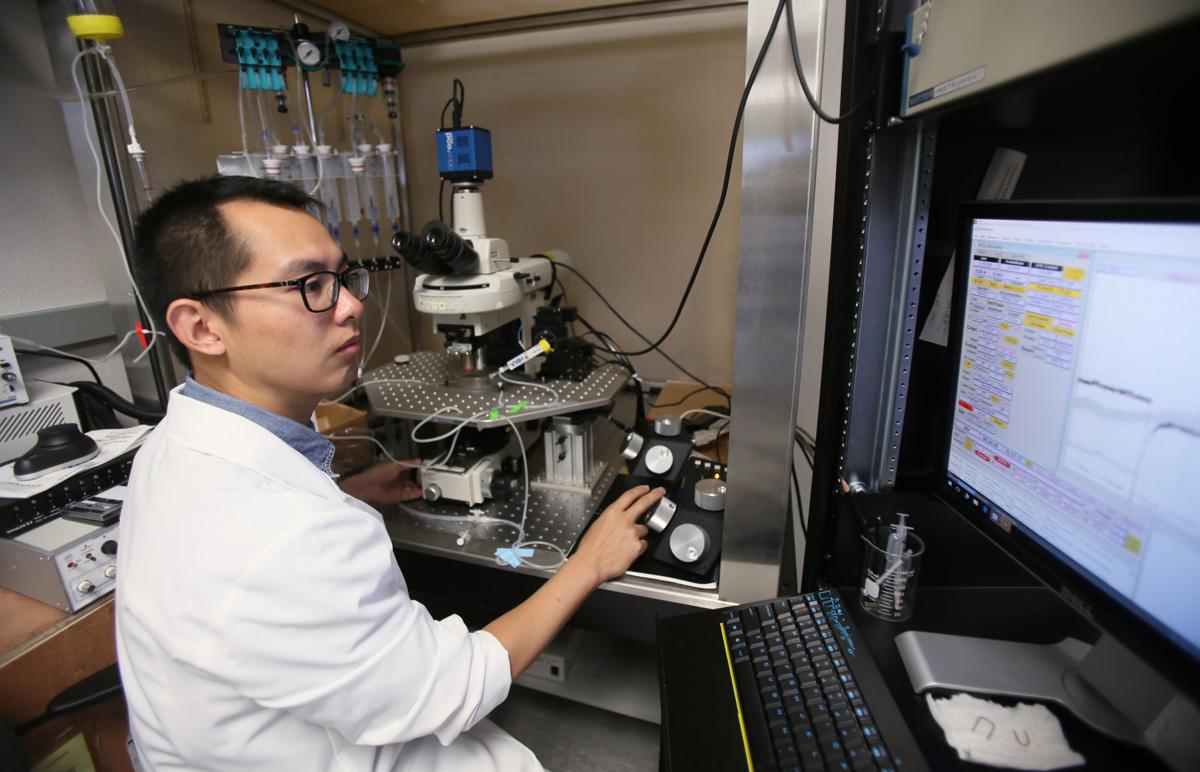 Jie Yu, a visiting assistant professor, prepares for slice electrophysiology of spinal cords for Regulonix, which is one of three UA technology spinoffs to receive investments recently.

Tech Launch Arizona has upped the University of Arizona’s technology commercialization game since it was launched about five years ago.

But how has that translated to local economic impact, a secondary, yet important goal of university tech transfer?

Since Tech Launch Arizona (TLA) began operations in the 2013 fiscal year, the UA has advanced in every measure of technology commercialization – things like invention disclosures, patents and licensed startups.

And while no detailed economic-impact study has been done, Tech Launch recently compiled some data on startups that provide some clues, short of a full-blown, economic-impact analysis, said Joann MacMaster, Tech Launch’s director of business development.

According to the internal study, since Tech Launch Arizona began operations in the 2013 fiscal year through the 2017 fiscal year ended June 30:

MacMaster said the results show TLA is on track.

“For us, it’s a really good understanding of where we are and how our startups are performing, and it kind of sets the stage,” MacMaster said, adding that plans are to conduct the startup analysis every year and publish an annual report.

The startup and other data also could be used to create a detailed economic-impact analysis, which would require a more sophisticated analysis to gauge things like indirect impacts, she said.

MacMaster said the startup results are promising but stand to rise as the pipeline grows.

“I’d like to be able to show the impact our startups are having not just in terms of jobs and revenue, but how many products are in the market,” MacMaster said. “We’re still a relatively young organization, so it will take a while for those startup numbers to take off.”

While the UA hasn’t done a detailed comparison of startup impact compared with other schools, MacMaster said her experience as former chief of a statewide business incubator program tells her TLA is on the right track.

“If you look at how incubators and accelerators do at developing companies, and keeping in mind we’re a pre-incubation process, the number of companies that are still in existence and the amount of revenue they generated last year is pretty significant,” she said.

Even so, the startup numbers don’t tell the whole story because the UA focuses much of its efforts on licensing UA technologies to existing companies, said Doug Hockstad, TLA’s assistant vice president of technology transfer.

“Ninety percent of what we do doesn’t involve licensing to startups, and we don’t have the economic impact of those,” he said.

Like most university technology-transfer agencies, Tech Launch Arizona is not profitable or self-sustaining, though that’s not the main goal.

Tech Launch has an annual budget of about $6 million and is funded by a portion of state sales-tax money earmarked for technology development at the state universities, UA-administered research grants, invention licensing fees and royalties and university allocations of state funds and other sources.

License revenue grew about 30 percent in fiscal year 2017, to $2.7 million, while the school showed across-the-board increases in startup companies, license agreements and other measures.

“We don’t look at revenues,” Hockstad said. “The real goal is to make sure that you’re having an impact, and getting the results of the research out in the commercial world, beyond the academic world.”

To create more startups to push UA faculty inventions into the marketplace, Tech Launch Arizona has boosted its “asset development” program, in which the UA funds research to ready them for market.

“The goal is to advance the technologies and make them attractive for a license,” MacMaster said.

A good example is the 2016 UA drug startup Regulonix, which is developing a new class of non-opioid painkillers and licensed the technology from the UA.

Through multiple asset-development awards totaling $130,000, Regulonix was able to gather more data that helped the company win a $300,000 grant from the National Institutes of Health, Rajesh Khanna said.

“It’s a sort of steppingstone, letting us leverage those funds to raise larger funds,” he said.

Khanna said he patented a different pain-drug technology and started a related drug-development company while in his prior position at Indiana University-Indianapolis, before accepting a position at the UA in 2014.

While that technology and company failed to gain traction, Khanna credited the team assigned to the company at Tech Launch Arizona with guiding Regulonix every step of the way with regular business meetings, sponsoring trips to technology showcases and setting up promising connections with “Big Pharma” companies.

“They are always there, working to help us get that connection,” he said, citing pharma industry veteran and TLA mentor-in-residence Mike Sember as a key advisor.

Khanna said that animal testing has shown that the drug candidates are more effective than morphine, nonaddictive and nontoxic at high doses.

The company is in talks with investor groups and is looking to raise money for initial human clinical trials in the next two to three years, Khanna said.

“It is a very timely technology — we hear about opioid abuse in the news every single day, and this is a passion for them,” MacMaster said. “They’re still in the very early stages but we’re really excited to see where they take the technology.”

Meanwhile, Tech Launch is not only working with 15 startups from fiscal 2017, but it has already logged 10 new startups this fiscal year through the end of December, towards an initial goal of 16 this fiscal year.

“Overall, our numbers are trending up, and startups in particular are way high,” Hockstad said.

Eller’s McGuire Center for Entrepreneurship is launching a remote campus this fall.

A worker at Regulonix, a drug startup commercializing a new kind of non-opioid painkiller and one of UAVenture Capital’s first investments.

Jie Yu, a visiting assistant professor, prepares for slice electrophysiology of spinal cords for Regulonix, which is one of three UA technology spinoffs to receive investments recently.