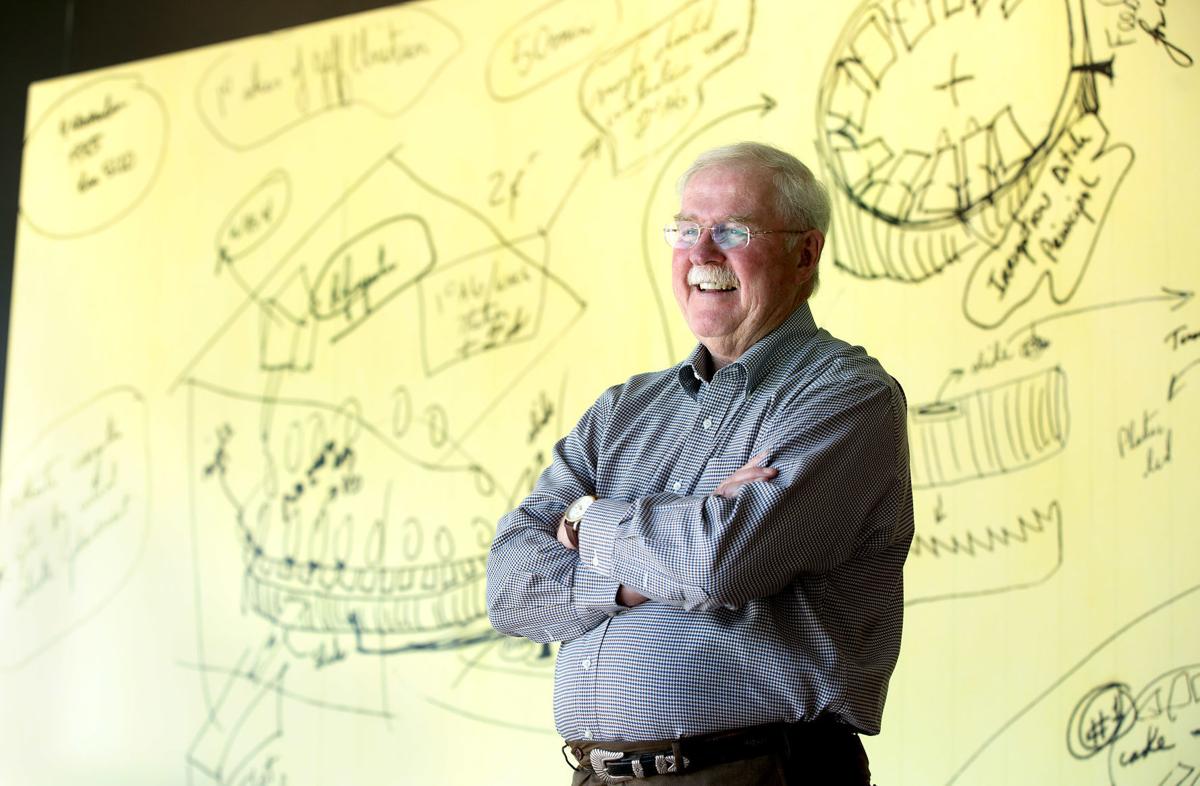 Dr. Thomas Grogan, 74, founder of Ventana Medical Systems, says writing a book has “been a great experience. The amazing part of writing a memoir is you relive what happened.” Grogan retired from the University of Arizona about nine years ago. 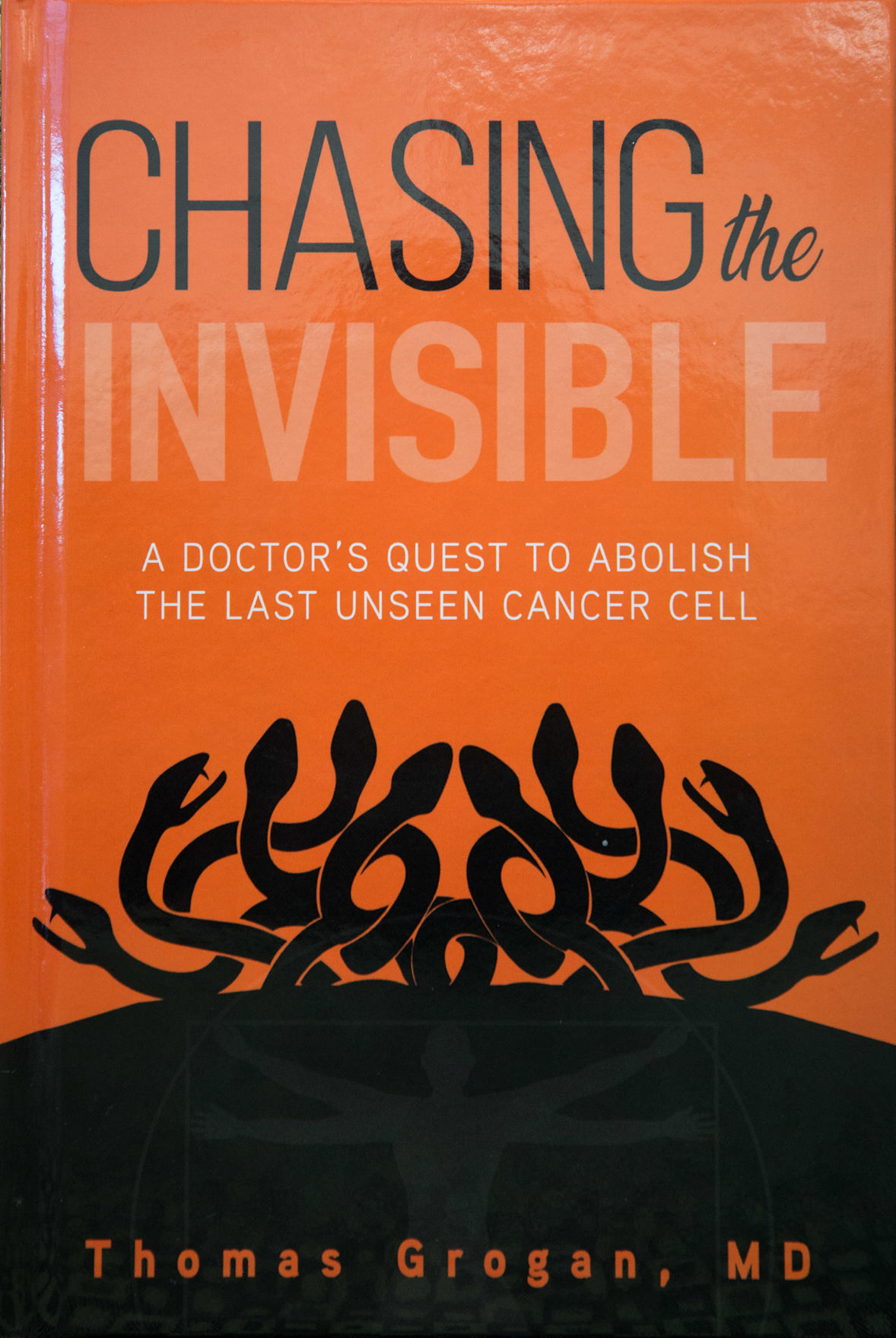 Thomas Grogan says, “I had my own talents, but my success had to do with the ability to create alliances.”

If you’ve been in Tucson long, you may have heard the story of how Ventana Medical Systems was founded here more than 30 years ago by a University of Arizona pathologist who invented an automated instrument to deliver fast diagnostics for cancer.

And you may have also heard what seemed to be the end of the story: How Ventana grew into a multi-billion-dollar public company and was acquired by Swiss drug giant Roche for $3.4 billion in 2008.

Grogan’s new book, “Chasing the Invisible: A Doctor’s Quest to Abolish the Last Unseen Cancer Cell” is a remarkable story, a loving memoir with elements of a spy thriller, a medical whodunit and a compelling business story.

Grogan, 74, who retired from the UA about nine years ago and stepped down in 2017 from active duty at what is now Roche Tissue Diagnostics, said he may have learned as much about himself as he did about book publishing during the writing process.

“It’s been a great experience. The amazing part of writing a memoir is you relive what happened,” Grogan said. “And my story is one part personal, one part diagnostic medicine, one part technology, one part entrepreneurship and one part big pharma and Roche.”

But getting the book published wasn’t easy, said Grogan, who noted that his work was rejected by a dozen traditional publishers.

He finally reached a deal with Virginia-based Koehler Books to print the book under a co-publishing deal.

The initial critique from Koehler’s editor was decidedly mixed.

“The editor said, ‘Okay, it’s interesting, it’s well-written — but it’s a lousy memoir because you don’t talk about yourself,’” Grogan said.

At one point in his draft, the editor demanded Grogan explain a passage noting that he had grown up “living in dangerous places in dangerous times.”

“Finally I admitted to him, if I tell that part of the story I have to say something I was raised in the family to never talk about — that my father was a CIA officer in the Middle East and Africa,” Grogan said.

With his mother’s blessing, Grogan detailed his family’s life on the Mediterranean island of Cyprus in the early 1950s, when Cypriots rebelled against the last vestiges of British rule as Greece and Turkey began fighting for control.

Grogan recounted how his mother fearlessly drove the family car through an angry mob of Cypriots to deliver him and his brother to a Christmas pageant rehearsal at church.

“There’s this whole episode where we’re attacked by a mob, and my mom says, Get down! And hits the accelerator,” he said.

Grogan’s book starts with a scene about five years ago, when his 90-year-old mother asks him for advice after doctors discovered a cancerous tumor in her skull they believed may have been a recurrence of earlier breast cancer and suggested she consider hospice care.

She decided to get further tests and instead of metastatic breast cancer, the tumor was identified as a large B-cell lymphoma.

“Well, I don’t see giving up yet,” she says. “After all, they haven’t done a biopsy and we don’t know the nature of the beast yet.”

After testing with Ventana instruments and treatment with a Roche drug, Grogan’s mother recovered and remains disease-free today, Grogan said.

Grogan relates his inspiring meeting with a Libyan doctor who treated Gadhafi’s sister and later won funding for Ventana instruments from late dictator.

He also tells the story of how during a fishing trip to Alaska he met a native Inuit woman with cancer.

Grogan helped her understand the importance of testing to get the right treatment, and after her successful treatment, the need to keep the “invisible” disease from recurring — using the analogy of how mosquitoes return every summer.

The book also describes Ventana’s diagnostic technology in detail, but in terms most laymen can understand.

Grogan’s story of how he started Ventana seems to parallel his own life, overcoming obstacles, fighting the unseen, never giving up.

He relates how, after filing for a business license to start Ventana in 1985, a UA lawyer told him he could already be a felon because state law prohibited state employees from forming private businesses while on the state payroll.

That law was changed to accommodate Ventana and has led to the formation of countless faculty startups.

Grogan details how he was rejected by 35 investor groups before finding investors to bankroll Ventana’s development, how the company went public and at one point losses had piled up to nearly $50 million, and how convincing the famed Cleveland Clinic to adopt the company’s instruments helped the company break into the market.

He details how Roche’s advances were initially viewed with skepticism but what began as a hostile takeover put the company on a path to global acceptance as a standard of cancer diagnostics.

Despite his editor’s best efforts to get Grogan to talk about himself, he spends much of the book praising the efforts of colleagues, including his UA pathology department head, the late Dr. Jack Layton, for encouraging his work; key investor John Patience for his unwavering support; and his UA lab team and fellow pathologists for their hands-on work to develop and perfect the game-changing diagnostics.

Grogan does acknowledge he has one talent.

“I had my own talents, but my success had to do with the ability to create alliances,” Grogan, said, describing how he lured top talent with the promise of transforming medicine.

“Because it’s like the story I tell about the Inuit woman — there’s a strength you gain when you know what you’re dealing with.”

“Chasing the Invisible" by Dr. Thomas Grogan is available for pre-order on Amazon.com or at tgroganmd.com. It is slated for release in December.

Dr. Thomas Grogan, 74, founder of Ventana Medical Systems, says writing a book has “been a great experience. The amazing part of writing a memoir is you relive what happened.” Grogan retired from the University of Arizona about nine years ago.

Thomas Grogan says, “I had my own talents, but my success had to do with the ability to create alliances.”