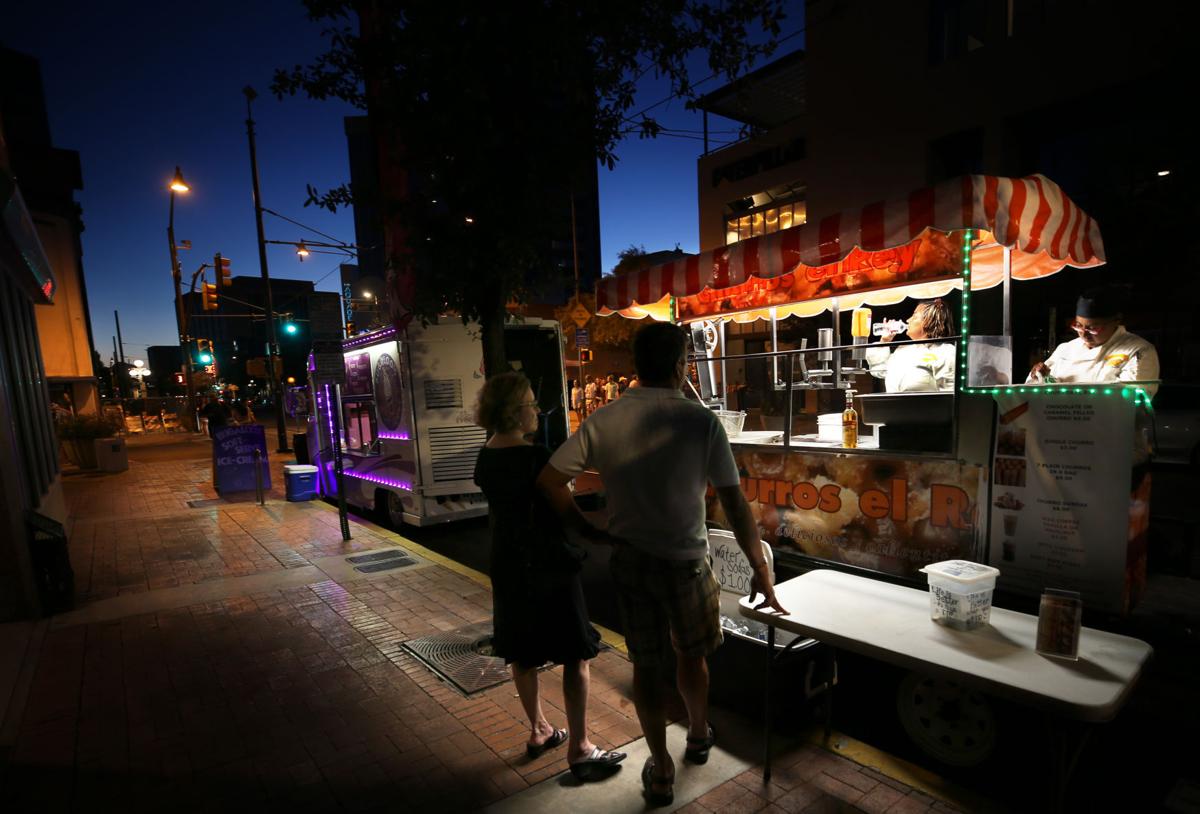 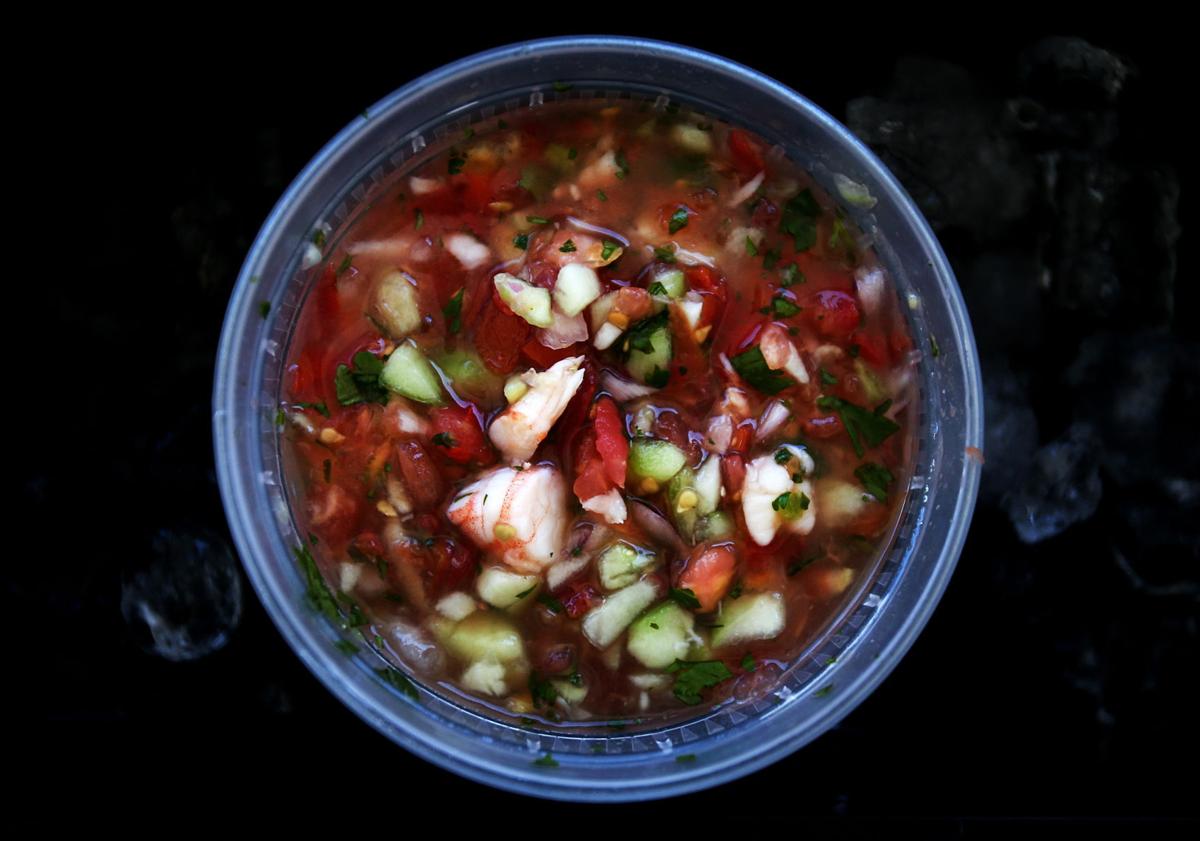 Queen Ceviche, famous for shrimp ceviche, will put hibiscus in a starring role of a specialty margarita at “Tucson 23.”. 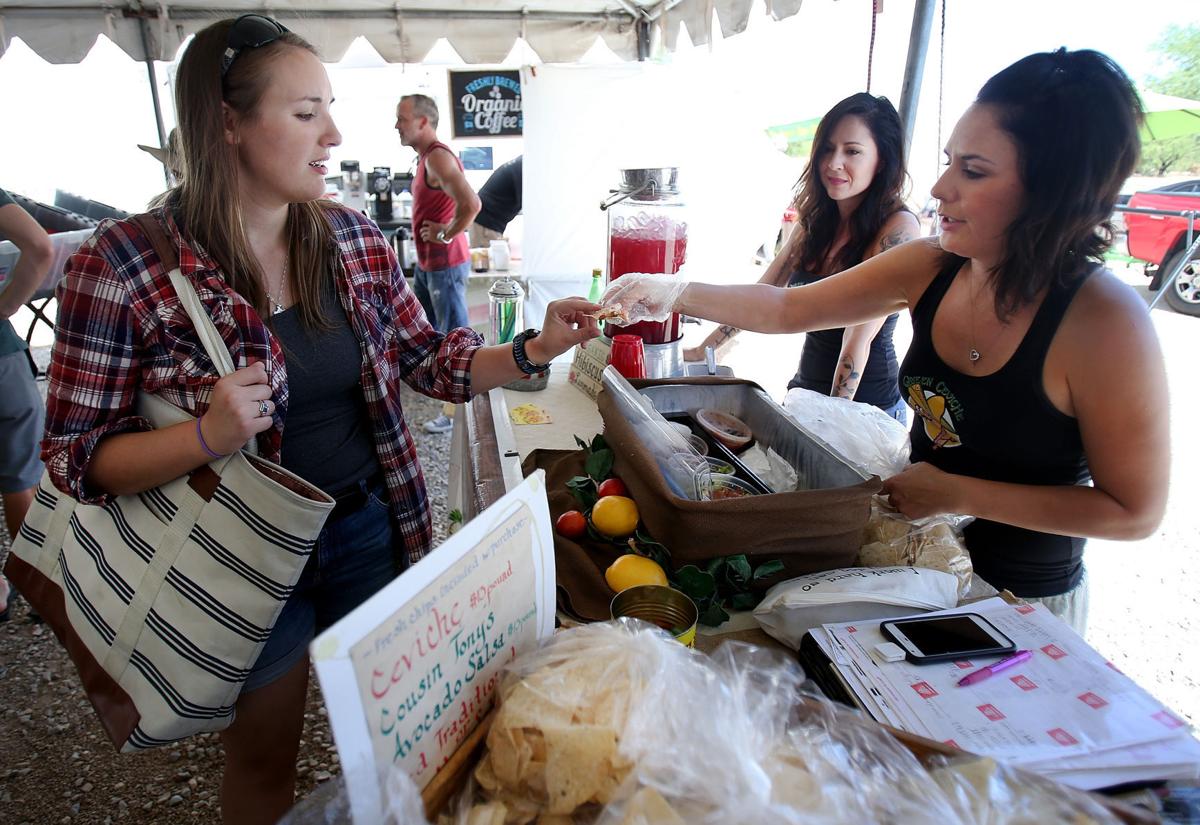 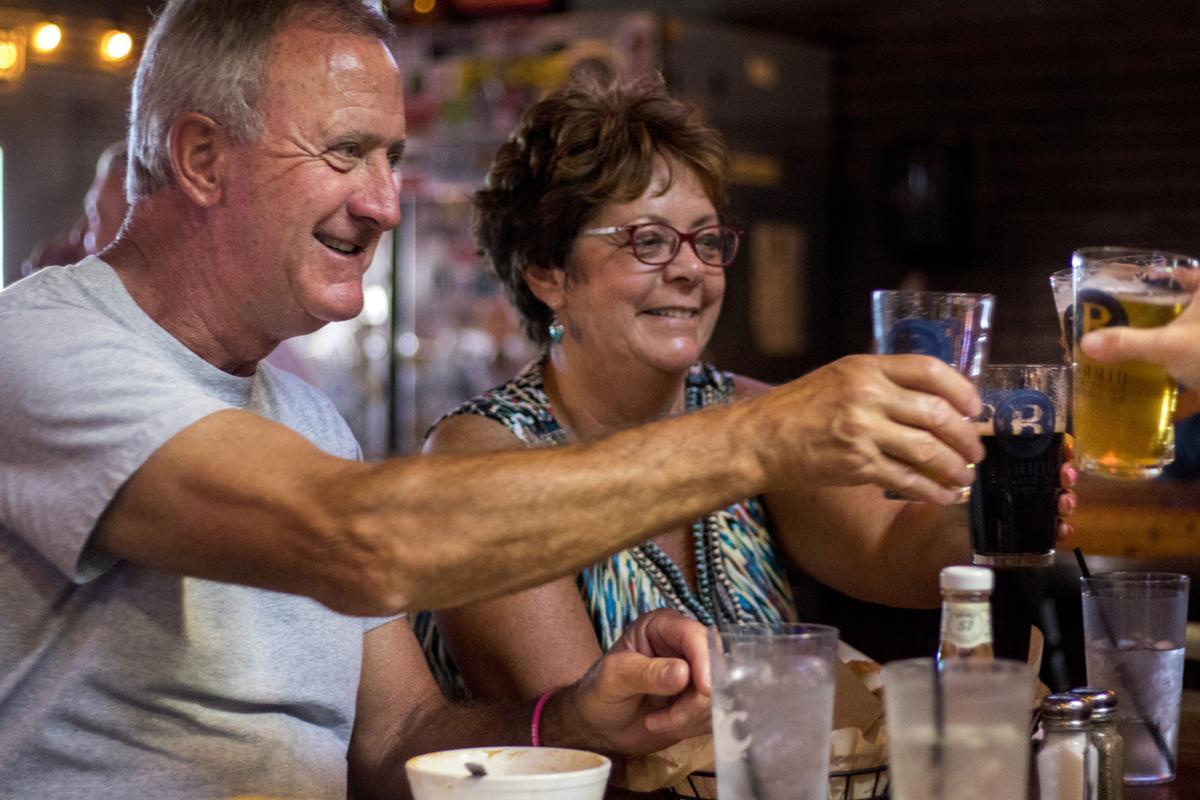 Rosemarie and Warren Bickford enjoy drinks at Barrio Brewing Company, which will be one of many vendors spotlighting drinks at the “Tucson 23 Mexican Food Festival.” 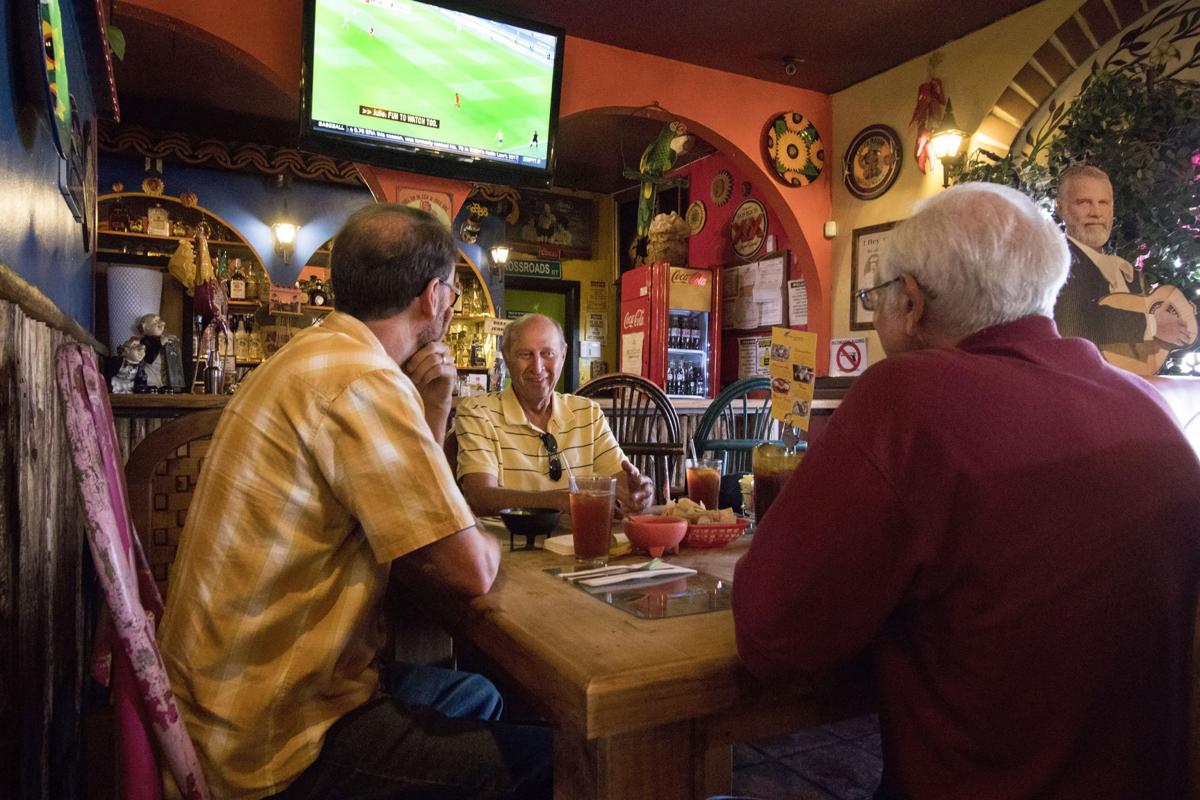 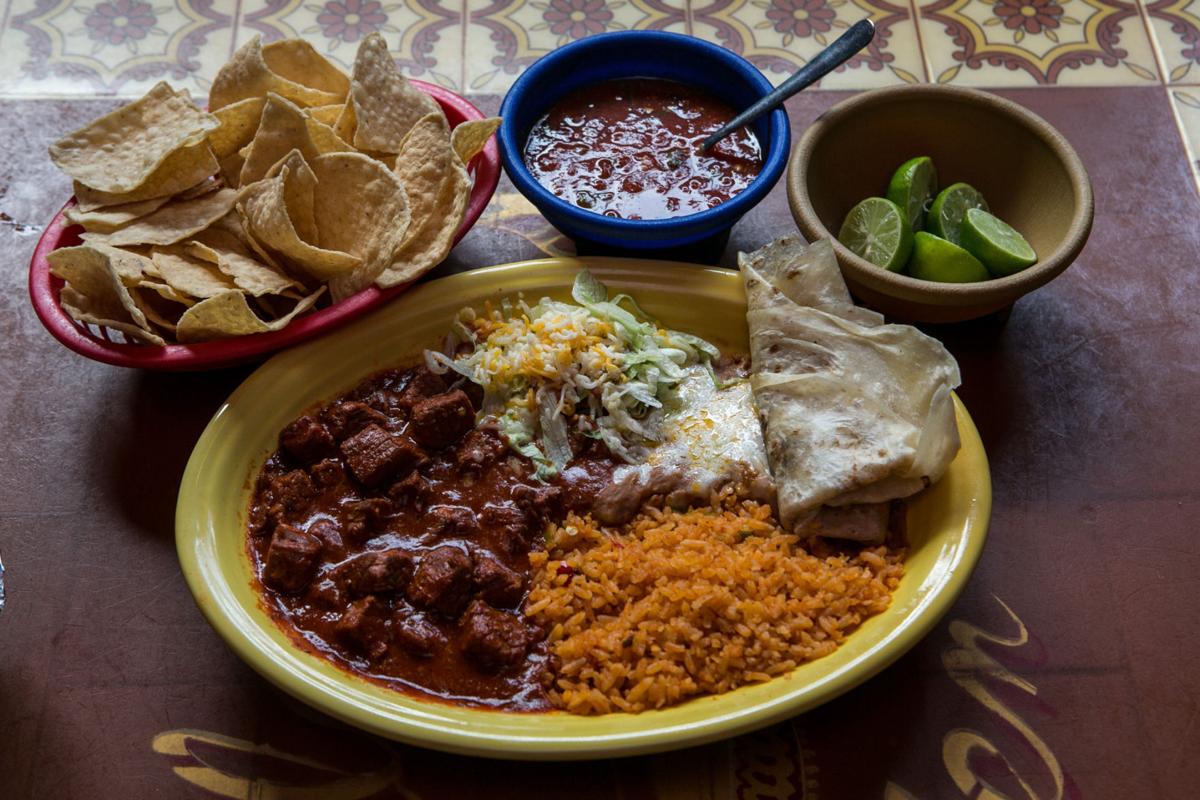 Crossroads Restaurant Drive In, which makes a red chile beef plate, has been in business since 1936. 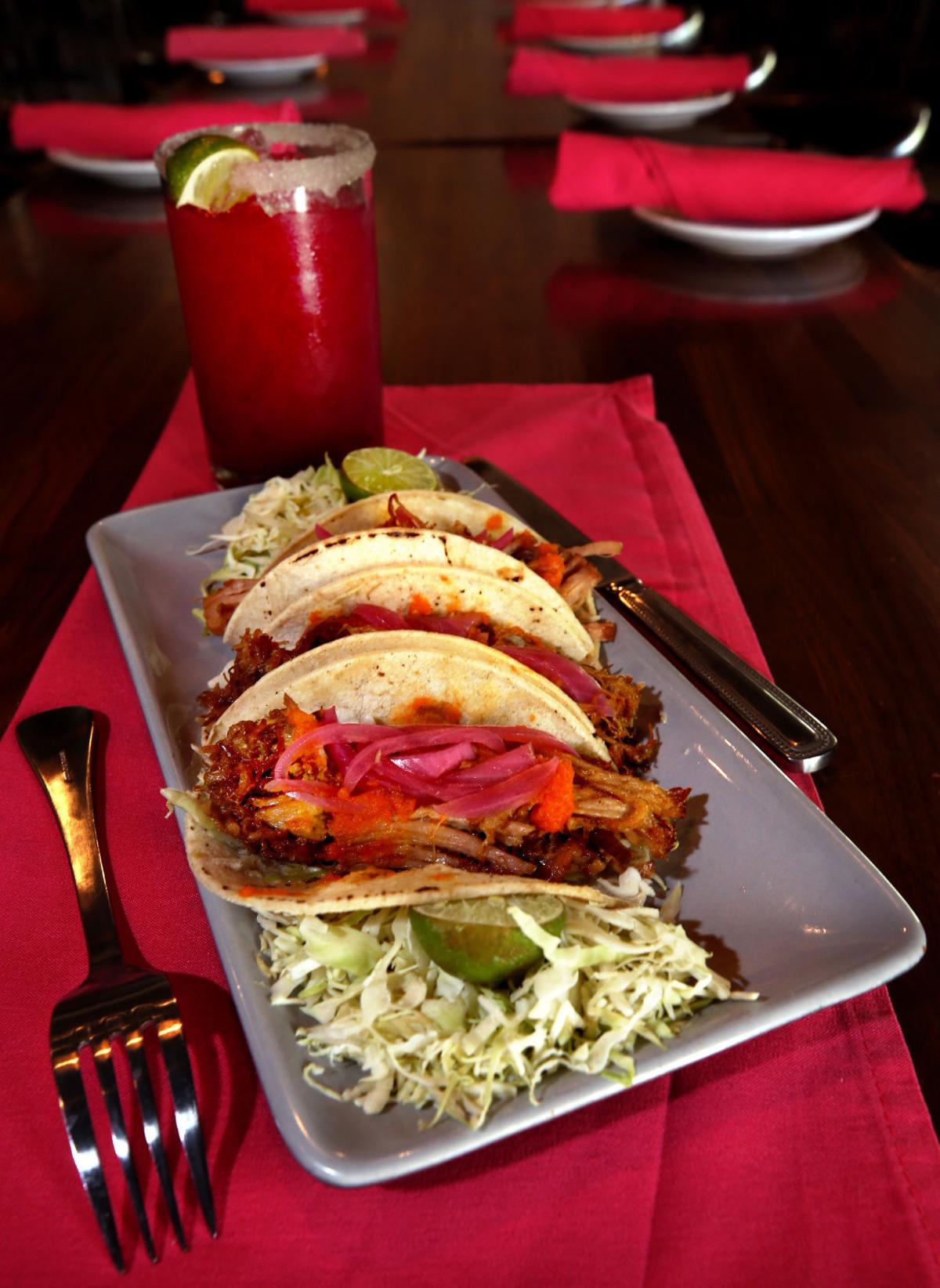 The carnitas tacos — shredded pork, habanero salsa and pickled onions — are just one of the delicious items at Reforma. 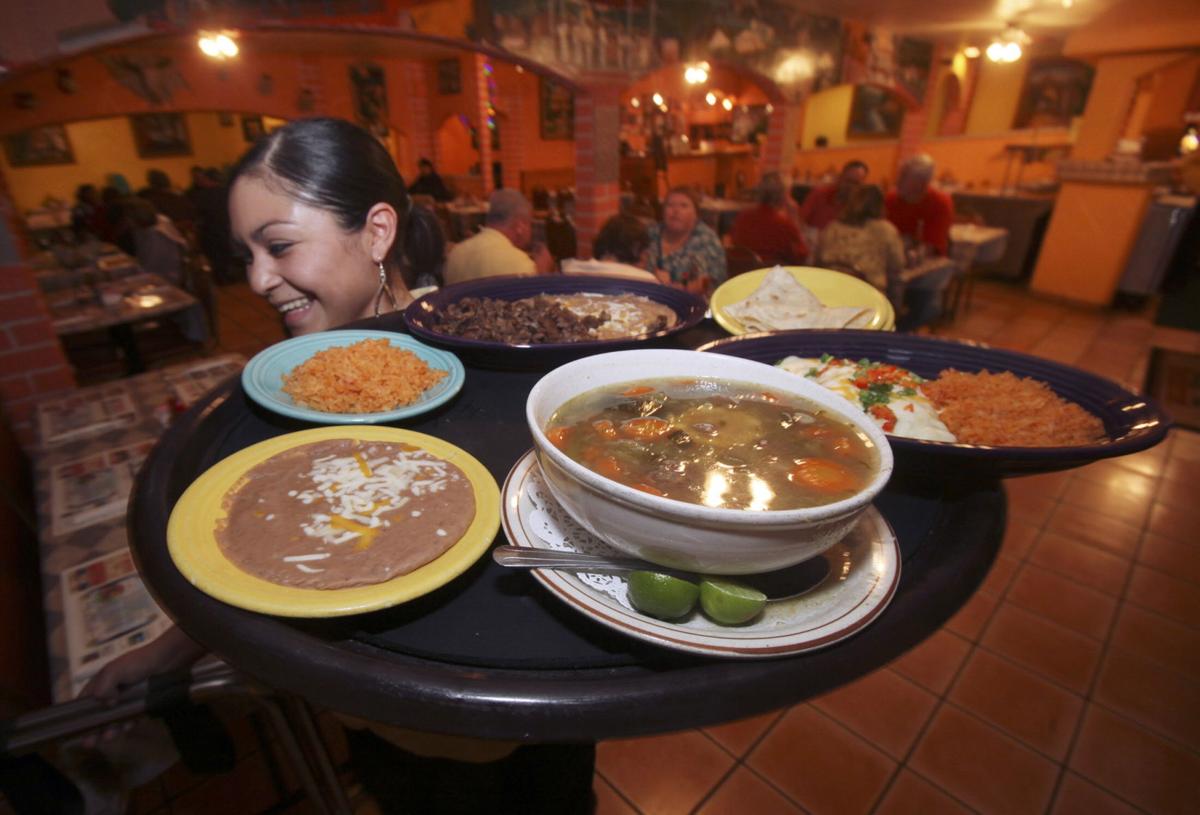 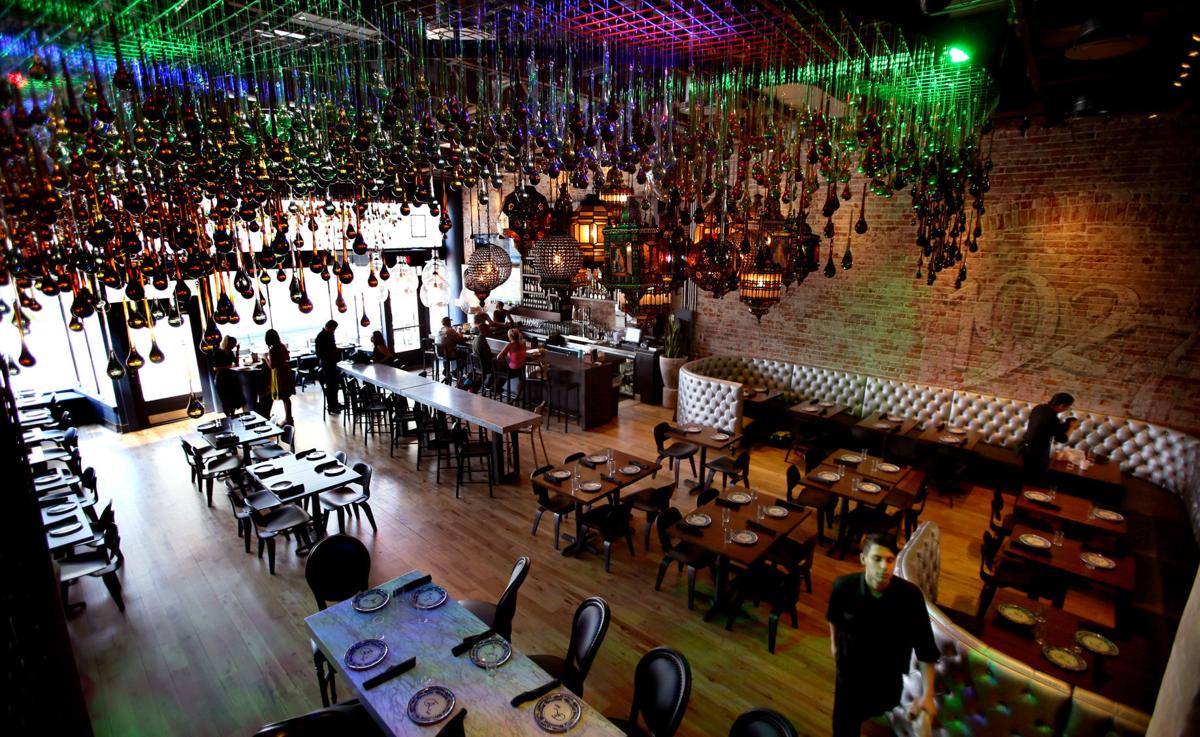 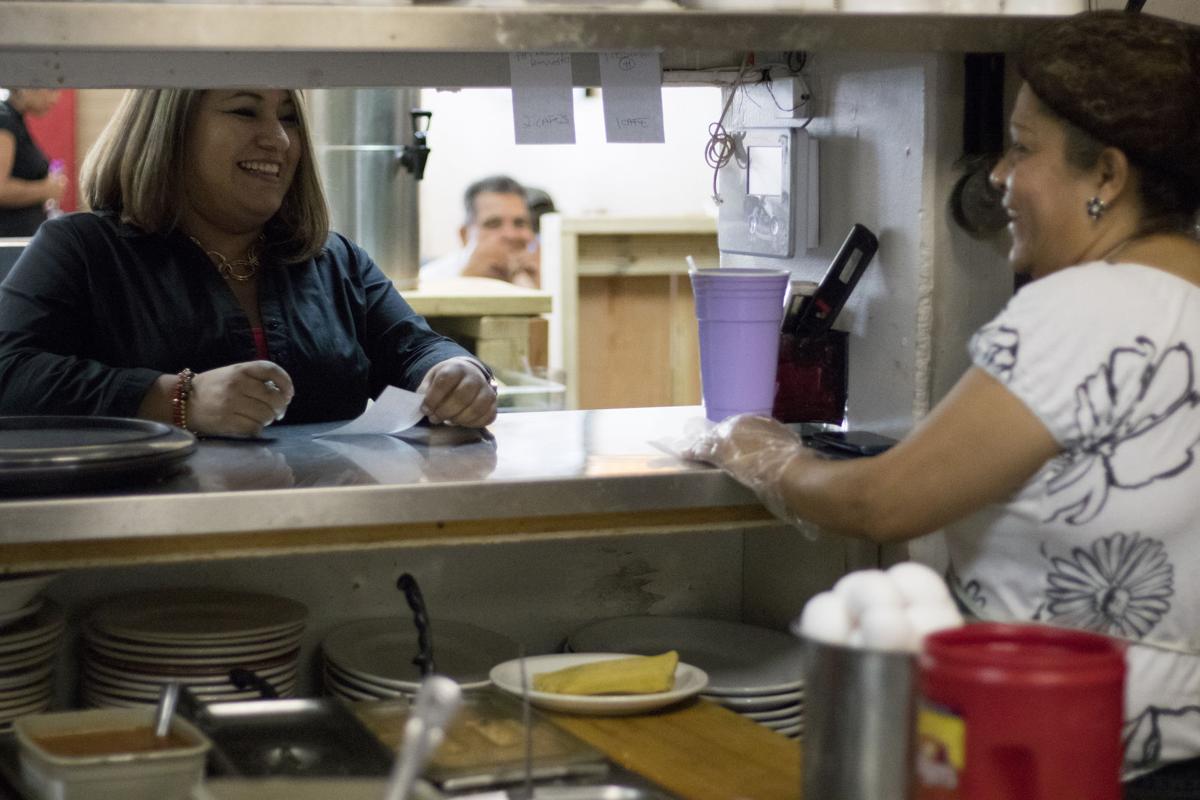 Southern Arizona Arts and Cultural Alliance, and Visit Tucson have teamed up with more than 30 Mexican restaurants for the second annual “Tucson 23 Mexican Food Festival” — celebrating the “Best Mexican Food North of the Border” at the JW Marriott Starr Pass on Saturday, June 17.

Tickets for the event sold out Tuesday.

“If you lived on the northwest side you may not be aware of the volume of these restaurants and the sheer talent of these restaurants,” said Cait Huble, SAACA’s communications director. “We want to educate people on the availability of the Mexican food and all the culture and tradition that goes into the dishes being served.”

Many of the restaurants participating in the “Tucson 23” festival, including South Tucson’s Crossroads, downtown’s iconic El Charro Cafe and Tucson southside fave Estrella Bakery, are culinary cornerstones of the so-called “Best 23 Miles of Mexican Food in America.” Between them, they have more than two centuries of history to draw from.

Relative newcomers at this year’s festival include Elvira’s On Congress, 256 E. Congress St., sister of Elvira’s Restaurant in Tubac; and Reforma, 4310 N. Campbell Ave. at East River Road, which draws its culinary influences from central Mexico.

The participating restaurants lie within the so-called “Best 23 Miles of Mexican Food in America,” a 23-square-mile swath encompassing Tucson’s cultural and culinary corridors that heavily draw influence from our neighbors in Sonora, Mexico.

Those boundaries loosely encompass downtown and lower midtown, and the south side and specks of the east side. It also cuts through the city of South Tucson, home to generational Mexican restaurants that have been around 50, 60 years and longer.

“Tucson 23” was launched last summer to celebrate Tucson’s designation by UNESCO as the United States’ first-ever World City of Gastronomy, shining a light on Tucson’s unique culinary and cultural history.

Tickets: $49, which includes food and drink samples. Available through saaca.thundertix.com

The restaurants and the bites

The following restaurants are expected to provide samples during "The Tucson 23":

The second annual "Tucson 23 — Mexican Food Festival" will include performances by Mariachi Mexteca, face-painting for the kids and artist demonstrations.

• Quench: Day of the Dead Beer from Mexico.

Best Mexican food in the world

Just before last year's inaugural "Tucson 23 Mexican Food Festival," the Tucson City Council put in writing its commitment to the notion that Tucson is home to the best Mexican food north of the border.

The council approved an ordinance designating a 23-square-mile area neighboring South Tucson and including swaths of the south and west sides, downtown and central Tucson, attaching a list of more than 50 generational restaurants that proved the lawmakers' point.

But Ray Flores, whose family owns El Charro Cafe and the related Sir Veza's Taco Garage and Charro Steak, said that wasn't the first time we heard the label "Best Mexican Food" attached to Tucson. In fact, he says his father Ray Sr. was one of the first to publicly use that reference.

Ray Jr. recalled that his dad reportedly told the noted Los Angeles Times writer and columnist Charles Hillinger that his hometown had the best Mexican food in the entire world.

"Sometime back in the '80s my father, being the kind of crazy dude he is, made a claim that Tucson was the Mexican food capital of the world," Flores said.

Hillenger came to Tucson to investigate the claim and wrote a story that ran in the LA Times and was syndicated to hundreds of newspapers around the globe including in Hong Kong, Flores said.

"That launched this thing that we were the Mexican food capital of the world," Flores said.

Tucson's Mexican food roots stretch back to Sonora, Mexico, brought here by immigrants and kept alive by the generations that followed. They infused their bold and colorful cuisine and their rich culture to help create a diverse culinary experience that continues to grow and prosper well beyond our borders.

Best Mexican food in the world? The Floreses, who lay claim to having the oldest continually operated Mexican restaurant in America at their flagship El Charro Cafe, are unwavering.

Part of the goal of Saturday's "Tucson 23" festival is to showcase Tucson's cultural and culinary blend and celebrate the contribution of Mexico that goes beyond the food to the quintessential mariachi music and vibrant visual arts. But mostly, the festival's goal is to introduce Tucson to itself through its taste buds.

Feliz Zaborsky had worked in Tucson restaurants for years when she and her sister decided to do something different.

"We thought we'd do salsas and sell them at farmers markets," she said of how their boutique Queen Ceviche salsa and ceviche business came to be. "But we wanted to do something different."

So the salsa business morphed into ceviche, the Latin-inspired seafood dish where fresh fish is cured in citrus juices.

Several times a week, they set up a stand at area farmers markets between Sierra Vista and Tucson, including Heirloom Farmers Market at Rillito Park and the Rincon Valley Farmers & Artisans Market on Old Spanish Trail, to sell directly to the public. They also are expanding into Showlow markets, and are regulars to area festivals including last month's Willcox Wine Country Festival and wine events in Sonoita.

The sisters, whose family has a long history of owning restaurants in Tucson and their father's native Chicago, use local and organic products; the hibiscus syrup is from flowers they source from the Co-Op while the chipotle flakes they use in their chipotle salsa comes from Native Seed Search.

The hibiscus drinks became so popular that the sisters are now bottling and selling the syrup.

At Saturday's "Tucson 23" festival, the sisters are casting the hibiscus in a starring role of a specialty margarita.

Three things about Reforma, which draws its influence from central Mexico, that make us drool:

• Margarita Monday: All day, every Monday, you can sample Reforma's tasty array of house margaritas for $6 a pop. There's the house margarita with Sauza Silver, a blood orange take with Milagra silver and blood oranges; the tamarindo margarita infused with tamarind; and the mysterious fresh muddle margarita of the day bartender's choice.

• Happy hour: From 3 to 6 p.m. daily, get discounted beer and cocktails. And make it a meal with two for $5 tacos. We're not talking ground-beef-and-cheese tacos, either. Check this out for tasty takes: the Ropa Vieja de Pollo with chicken, sweet peppers and radish; Hongos y Rajas vegetarian with mushrooms, poblano chiles and fire-roasted salsa; and a pork taco with the pork braised in orange and cinnamon.

• Side dishes/appetizers: The menu dances from the usual — nachos, quesadillas, a tangy cheese dip — to the truly inventive — ahi tuna tartare tostada, Mexican street corn bowl with charred corn and a shrimp and octopus ceviche.

Crossroads has literally been at the crossroads of South Tucson's dynamic and bustling South Fourth Avenue restaurant corridor since the beginning.

Long before drive-in restaurants were ubiquitous, there was Crossroads, anchoring the corner of South Fourth and East 36th Street since 1936. In the early days, the restaurant boasted just a few tables inside; most preferred fresco dining, a trend that carried on for decades in cold and hot weather.

Today, Crossroads is looked upon as the patriarch of all that followed on South Fourth, which is packed with more iconic Mexican restaurants side-by-side than any other area of Tucson. The draw: A simple menu of authentic, traditional fare from tostadas and enchiladas to chimichangas and tortas. Diners consistently rave about Crossroads, especially the house carne seca. One Yelp reviewer from Benson proudly proclaimed in 2015 that Crossroads is "hands down best Mexican food in Tucson.

"This is the type of Mexican food I have been waiting to find in Tucson,' Danny B. of Tucson wrote.

Here's why we love the idea of Churros El Rey: They are literally across the street from the Arizona Daily Star on Tucson's south side. We can walk. And even if the mercury shoots up north of 100, we're gold; it's a short jaunt and a sweet payoff when we plop down a few bucks for crispy, chewy, sugar and cinnamon-dusted churro bites. Heck on a particularly tough day we're splurging. We're getting them topped with a scoop of ice cream. Take that you old hot sun!

You can get them filled with chocolate, cream or fruit, or drizzled with caramel or chocolate.

El Churro is open from 5 to 10 p.m. Mondays through Saturdays, perfect timing for that after-dinner sweet hit, or maybe that instead-of-dinner sugar splurge.

Those tamales anchor a menu that includes dishes that patriarch and restaurant namesake, Perfecto, has been preparing most of his life. Perfecto spent decades cooking in his native Nogales, Sonora, before moving the family to the U.S. in the 1990s.

The house specialty: Green corn tamales. A colleague described them as light and fluffly, with a hint of sweet balanced out by a slight bitter that enhances every nuance of the fresh corn.

Diners pack the restaurant on Sundays when Perfecto's puts those tamales on its Sunday buffet table. The buffet is served from 11 a.m. to 3 p.m. Sundays.

Some notable stops in Tucson's 23 miles of Mexican food.

Perfecto León's children buy him a restaurant to say thanks.

Fired Pie turns 4 and we get $4 pizzas

Celebrate 23 miles that show the variety of Tucson's Mexican food

Event expands from a day to a week, including special offers from participating restaurants.

Queen Ceviche, famous for shrimp ceviche, will put hibiscus in a starring role of a specialty margarita at “Tucson 23.”.

Rosemarie and Warren Bickford enjoy drinks at Barrio Brewing Company, which will be one of many vendors spotlighting drinks at the “Tucson 23 Mexican Food Festival.”

Crossroads Restaurant Drive In, which makes a red chile beef plate, has been in business since 1936.

The carnitas tacos — shredded pork, habanero salsa and pickled onions — are just one of the delicious items at Reforma.