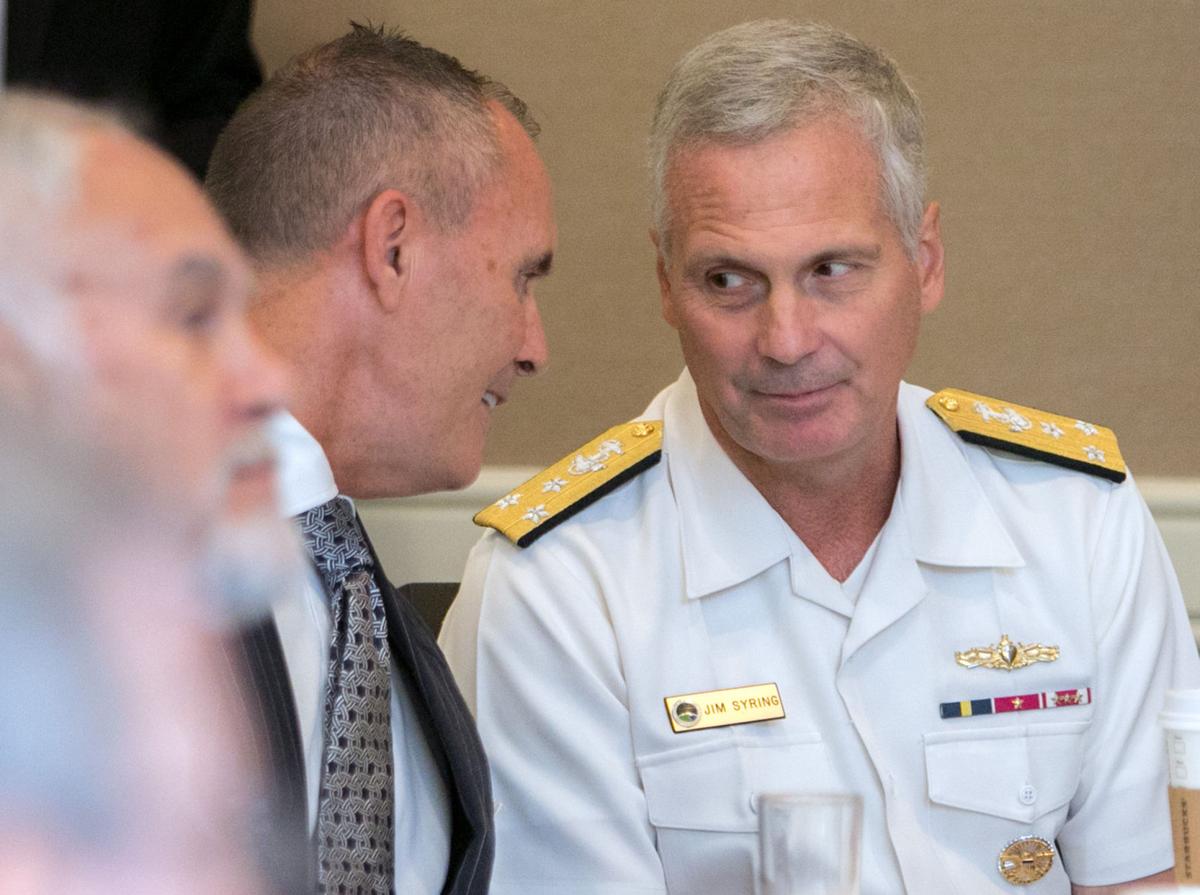 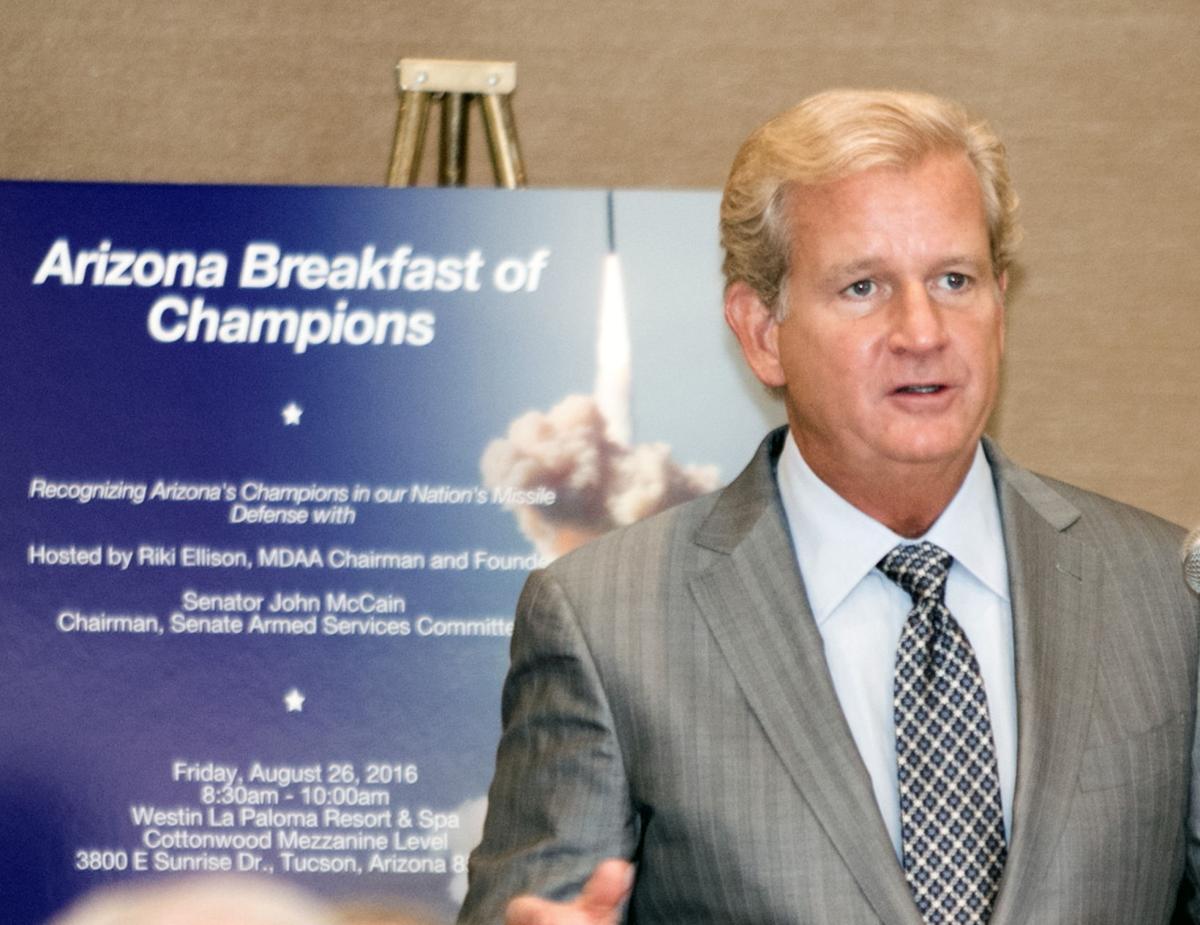 Taylor Lawrence, president of Raytheon Missile Systems, said in August that the company is growing here and considering an expansion.

The nation is counting on Tucson-based Raytheon Missile Systems as it builds out a missile shield designed to protect allies as well as America, the chief of the Missile Defense Agency said Friday during a visit to Tucson.

Syring said Raytheon’s Standard Missile-3 has formed the backbone of the U.S. missile shield for Europe and Japan.

Raytheon has produced hundreds of SM-3 Block IA missiles and is in initial production of the more capable SM-3 Block IB, for the Aegis Ballistic Missile Defense system. U.S. and Japanese ships carry the system, and a land-based version in Romania went into operation in May.

Another version, the SM-6, was designed as an advance, long-range ship-defense weapon but has also been tested against ballistic missile and moving maritime targets.

Syring said the SM-6 will be tested in an intercept flight in December.

“That missile will be the foundation of our arsenal for decades to come,” said Syring, adding that he expects its capabilities to grow.

The MDA plans to test a faster and larger version of the SM-3, the SM-3 Block IIA, in October with development partner Japan.

“This is a huge demonstration for us and the first intercept test” of the Block IIA, he said at a event hosted by the Missile Defense Advocacy Alliance at the Westin La Paloma Resort & Spa.

Raytheon Missile Systems President Taylor Lawrence said demand for the missile killers is growing, as the latest version of the SM-3, the Block IB, is moving toward full-rate production and SM-6 production is expected to increase.

That, together with expected production of U.S. versions of missile interceptors stemming from Raytheon’s partnership with Israel’s Rafael, means Raytheon is looking to grow, Lawrence said.

“We are growing again, and we’ve been hiring again here in Tucson, we’re hoping to continue to grow,” he said in an interview.

Lawrence said he is lobbying lawmakers, including Sen. John McCain, to give the MDA the authority to enter into multi-year contracts. The Pentagon now can award contracts on an annual basis with options for later years.

The MDA has so far not sought multi-year contract authority, a spokesman said.

“If we can get a big multi-year (contract) — and this is for core requirements — it’s to basically buy the most efficient way what the war fighter needs” Lawrence said, noting that the company could buy common components like propulsion systems in larger lots.

“If we could get that done, we could really plan a very logical expansion and do it in a way that makes a lot of sense.”

But all that growth may not come in Tucson. Development work and assembly of sensors and other SM-3 and SM-6 components takes place in Tucson, but final assembly takes place at its plant in Huntsville, Alabama.

“We’re going to grow and what I’ve emphasized to local leaders (is) I want to grow here, but I’m going to look at all the opportunities for the best place to grow.”

McCain, chairman of the Senate Armed Services Committee, said missile defense is vital to the nation’s security, citing four Iranian missile tests in the year since the nuclear non-proliferation deal with the U.S., and recent missile tests by North Korea, including a test launch by a submarine on Wednesday.

“The buffoonery of the (North Korean) leadership is notorious, but make no mistake, sooner or later we will have to confront the reality of a North Korea with the capability to strike U.S. forces and its allies with nuclear weapons.”

McCain noted that the MDA is fully funded in the current version of the National Defense Authorization Act, still pending in Congress.

During Friday’s “Breakfast of Champions” event, the Missile Defense Advocacy Alliance honored five Raytheon employees, along with others involved in missile defense.

Tucson-based Raytheon Missile Systems is adapting some of its missile-assembly plant to production of small satellites for the U.S. military.

Will potentially save the Pentagon and taxpayers millions of dollars, Tucson-based Raytheon Missiles Systems says.

A Raytheon Standard Missile-3 misses its mark but an SM-2 ship-defense missile destroyed a cruise-missile target.

The recent intercept by a Standard Missile-6 fired from a Navy cruiser is the longest in naval history, according to Raytheon.

Raytheon's Standard Missile-6 Dual 1 can counter air threats including aircraft and cruise missiles or destroy ballistic missiles in the final stages of flight.

The test keeps longer-range interceptor on track for deployment by 2018.

Taylor Lawrence, president of Raytheon Missile Systems, said in August that the company is growing here and considering an expansion.