The Hub At Tucson II, the shorter building in the foreground, is the newest high-rise for students near the UA campus. 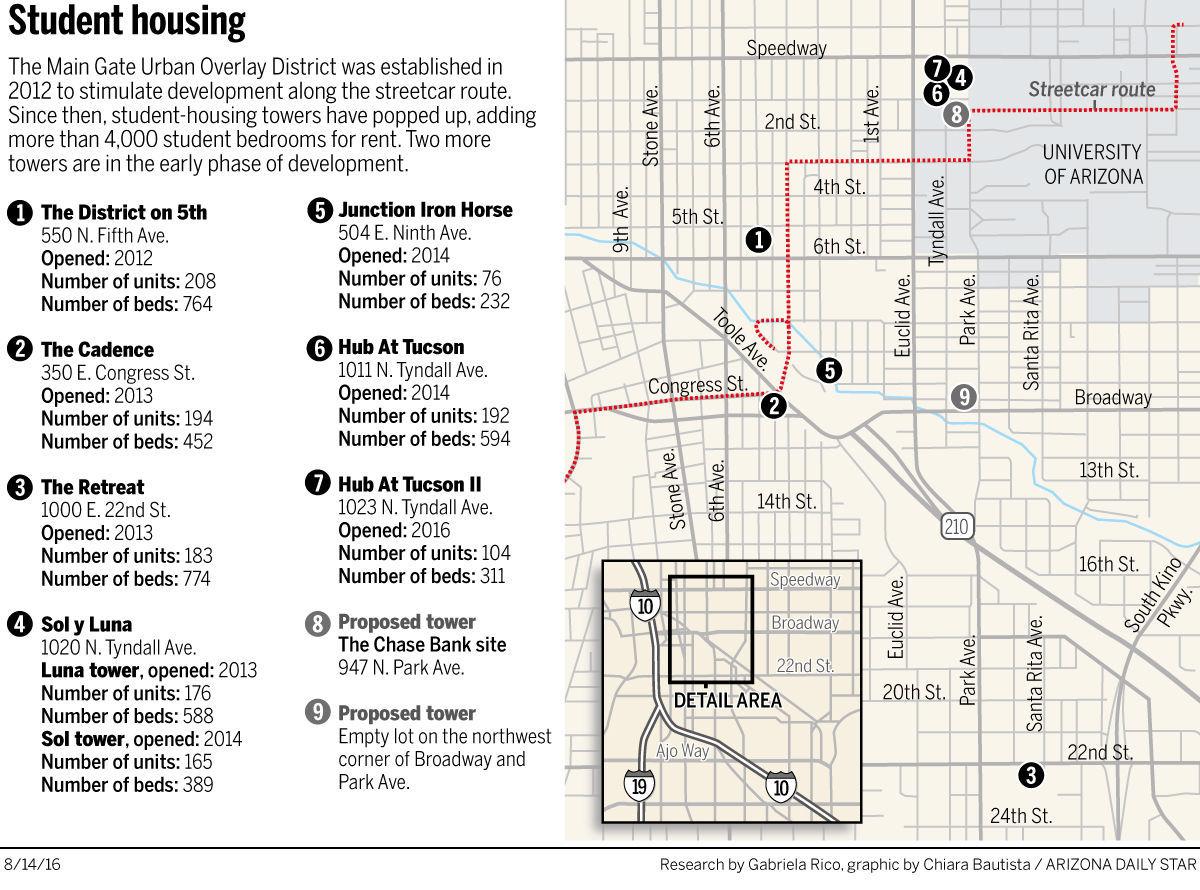 Developers are negotiating the purchase of two sites for new towers: the Chase Bank property at 947 N. Park Ave., just south of Speedway, and an empty lot on the northwest corner of Broadway and Park Avenue.

A newly completed complex, Hub At Tucson II, opens this school year and sits next to other towers between Park and Tyndall avenues on the south side of Speedway.

The units are leasing as fast as they’re being built — a trend that’s being seen nationwide in college cities.

“Nationally, student housing is booming,” said Bert Kempfert, senior vice president of investment properties and multifamily developments for CBRE. “In the first quarter of 2016, there was a record $2.6 billion in capital poured into this sector.”

Growing enrollment, coupled with state cuts to university funding, made the availability of space for students a matter for private developers, since universities could not afford to build student housing.

“Student housing tends to be recession-proof since, when times get tough, many people opt to return to school,” Kempfert said. “Coupled with that is the fact that there are more people of college age now than ever before in history.”

Locally, enrollment at the University of Arizona has grown by 2 percent a year in the past decade, up to more than 43,000 last school year.

The university has 23 residence halls and one graduate apartment complex with a total of 6,612 beds.

The addition of more than 9,500 beds developed by the private sector still leaves a lot of students looking for housing.

“The university’s own Office of Institutional Research and Planning projects enrollment to increase to 46,160 students by 2018, which would create unprecedented pent-up demand for student housing in Tucson,” Kempfert said.

The lure of the towers has already had an impact on neighborhoods surrounding the university, as students leave older rental houses for the location and amenities of the towers.

Perks at the towers include things such as on-site salons, rooftop pools and party buses that rotate between the properties and North Fourth Avenue/ downtown nightlife.

The exodus from surrounding neighborhoods has been so significant that the city and county are promoting a campaign to encourage landlords to sell their rental homes and return the area to homeowners.

The first student-specific complex to be built in Tucson with one bathroom per bedroom was Northpointe Student Apartments, on Wetmore Road near Limberlost Drive, in 1998.

At the time, that was the closest a developer could get to campus because of height restrictions in the city’s core.

Developers chose spots such as Stone Avenue, north of Grant, and Starr Pass, west of Interstate 10.

When the Main Gate Urban Overlay District was established in 2012, in order to stimulate development along the route of the modern streetcar, the game changed.

“One of the first to take advantage was The District on 5th,” said Mike Chapman, senior vice president of NAI Horizon, a multifamily and student-housing specialist.

The complex, on Sixth Street one block west of Fourth Avenue, opened in 2012. Since then, more than 4,000 student-housing beds have become available in Tucson.

Chapman, who does absorption studies of student housing in the fall and spring, found vacancy rates as low as 6 percent in the fall. The market-rate apartment vacancy is about 6.8 percent.

“This year it appears the towers are generally just about leased up,” Chapman said. “Away from the periphery, the student complexes are 75 to 80 percent preleased. That’s a very respectful percentage.”

There are now a total of 22 privately owned student-housing projects in Tucson that are “purpose-built” and rent by the room.

Rents average about $600 per bed and units have up to six bedrooms, each with its own bathroom. Student housing rents in the spring of this year were about $1.62 a square foot. The average rent in the Tucson conventional apartment market was 91 cents per square foot at the end of the second quarter.

Is Tucson prepared to absorb more?

“I think we’re close to being oversaturated in student housing,” said Hank Amos, president of Tucson Realty & Trust Co. “I think there’s room for somebody to fill another one, but somewhere along the food chain someone is going to feel the pain.”

He said the newer towers, with their proximity to campus and high-end amenities, will have an impact on the older properties farther out.

“We’ve built so much student housing and not all students can afford it,” Amos said. “I don’t know where the tipping point is.”

But Kempfert and Chapman said the market is driven by the need for such housing.

“Not even close to saturation,” Kempfert said. “Ninety-six percent occupancy and pulling students out of surrounding neighborhoods will increase property values and bring students closer to campus.”

The steady increase in enrollment at the university is fueling optimism.

“They’re smart and resourceful,” Chapman said of developers. “All the studies say there’s quite a bit of demand in the market.”

And, for surrounding neighborhoods, less interest from students to rent houses means fewer disruptive parties and fewer of the much-maligned mini-dorms.

“People are always being amazed by the draw the towers have had,” Chapman said. “I still see quite a bit of potential in the market, and everything points to continued growth.”

Re: More towers for student housing planned in Tucson. Developers are negotiating the purchase of two sites.

The Hub At Tucson II, the shorter building in the foreground, is the newest high-rise for students near the UA campus.