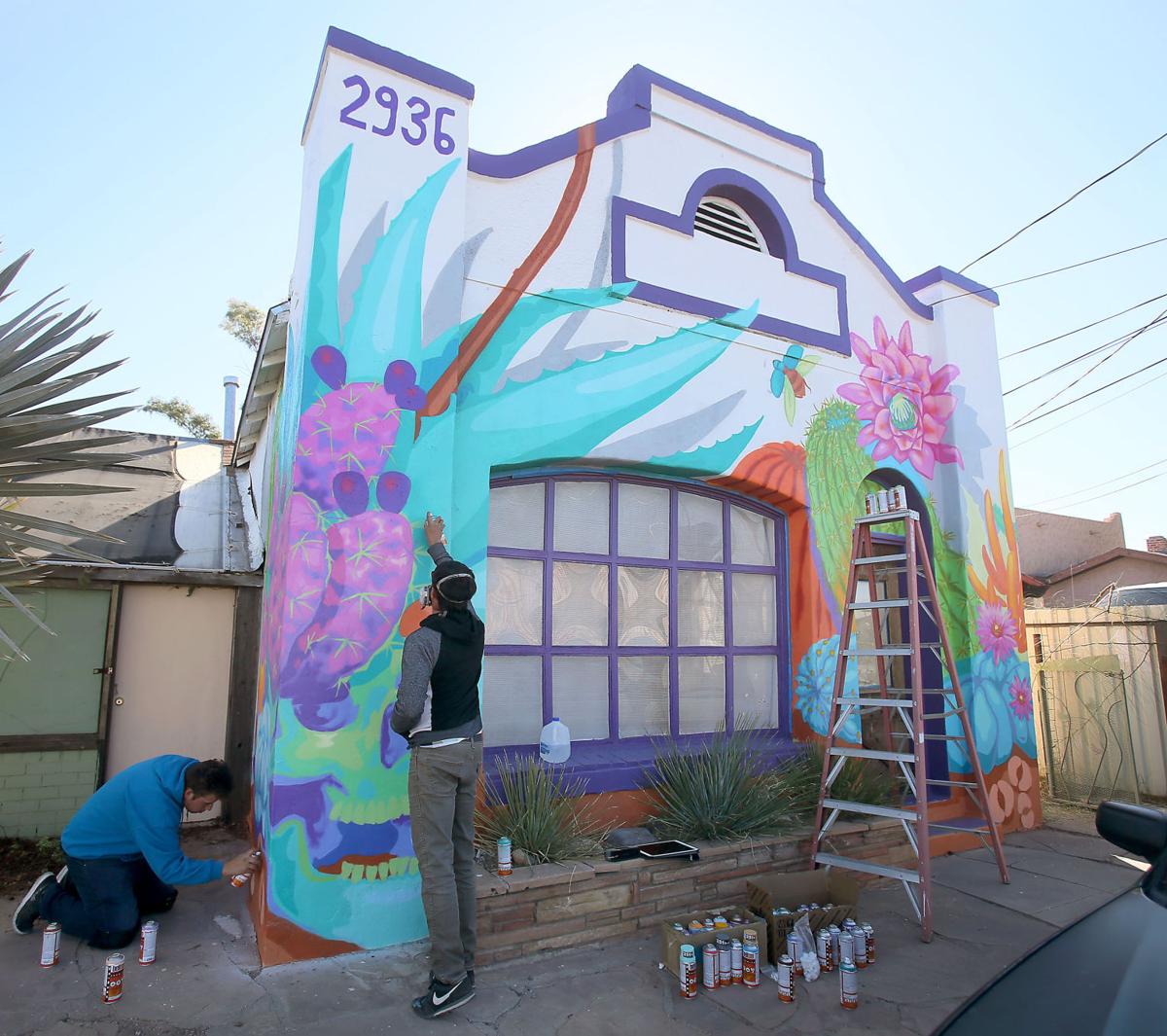 Rock Martinez, right, and his assistant Fernando Leon work on the mural for Plants for the Southwest nursery, at 50 E. Blacklidge Drive. The mural will have a formal unveiling on Saturday, and Martinez will be on hand to discuss the work. 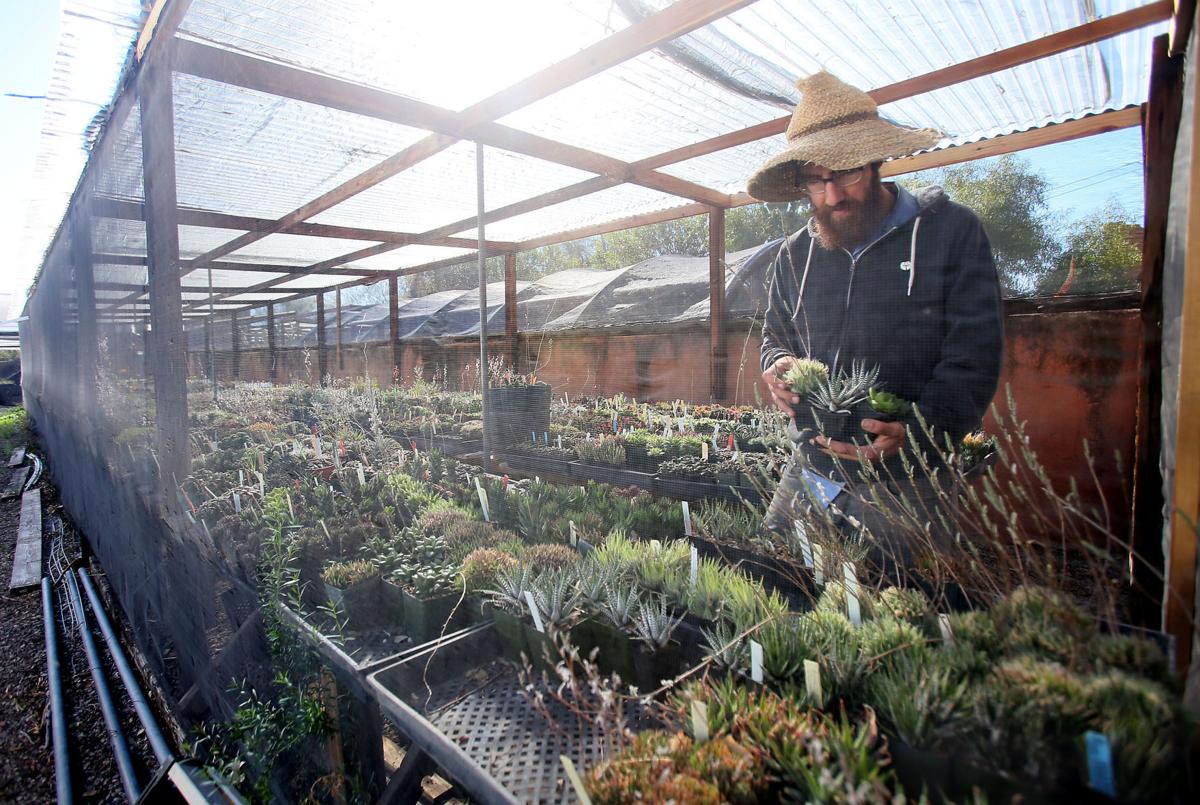 The nursery grows some common Sonoran Desert plant varieties, but most of its plants are more exotic in origin. 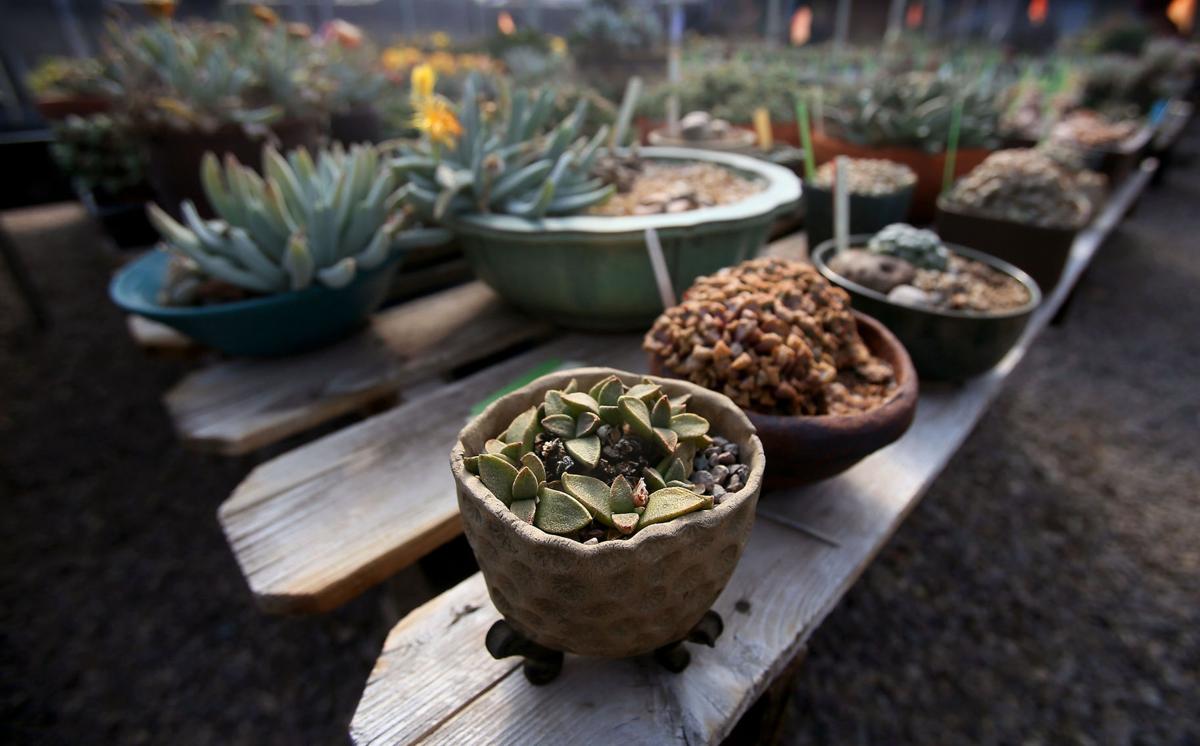 Plants for the Southwest nursery, located at 50 E. Blacklidge Drive, also sells the pottery of local artists. Many of the plants will come in pottery bowls. The nursery has been in business since 1986.

On Thursday, a guy named Rock was completing a mural on an avenue named Stone for a business that sells, among many other things, succulents known as “pebble plants” or “living stones.”

Life has been a series of coincidental pairings for Jane Evans and Gene Joseph, the wife-husband team that owns the twin businesses of Plants for the Southwest and Living Stones Nursery.

The Spanish Colonial Revival building at 2936 N. Stone Ave., now adorned with artist Rock Martinez’s latest mural, was a flower store and greenhouse when it was built in 1933. It was sold to famed Tucson florist Tom Inglis in 1933 and he sold it to Lilian Reichert in 1948, who operated it as Garden Flower Shop.

Evans became proprietor of the flower shop and its adjoining greenhouse in 1978, when she was a 24-year-old graduate of the University of Arizona School of Horticulture, working for the UA Cooperative Extension and contemplating a job in California as an editor for Sunset Garden magazine.

A mutual friend of Reichert and Evans’ parents got them together and Reichert proposed she buy the business. “I was 24 years old. I didn’t have any money. She said, ‘We’ll work something out.’” She did, and Evans operated the flower shop, while Reichert continued to live on the property.

Evans had met Joseph in school, where he also got a degree in plant sciences. He was working as a plant propagator at the Arizona-Sonora Desert Museum and had filled his tiny backyard with desert plants he had grown. When Evans moved in, she proposed that he move his plants out — to her property at Stone and Blacklidge.

That move was the beginning of Plants for the Southwest in 1984.

Both the business and the relationship grew.

By 1988, they were married. In 1990, they closed the flower shop to concentrate full time on the nursery business, which had jump-started when they had an opportunity to buy a 15,000- square-foot collection of lithops, or “living stones,” from a collector and cultivator who had recently died.

Their business now boasts what Joseph calls “the largest collection of correctly named (lithops) plants in the world.”

Lithops, natives of Namibia and southern Africa, are mimics, said Evans. They evolved to take on the coloration of the rocks where they grow. When not flowering, they are easily mistaken for rocks.

The plants sold in both businesses are propagated and grown on-site in 17,000 square feet of greenhouses and shade structures. “We pride ourselves on the fact that we grow plants from seed,” said Evans. “Our plants haven’t been yanked out of the ground.”

The nursery grows a few varieties of common Sonoran Desert plants, such as ocotillo which, Evans said, fare much better when grown from seed. The Arizona Department of Transportation recently began specifying seed-grown ocotillo for planting along the state’s highways after realizing that half of its transplanted ocotillos did not survive.

Most of the plants, however, are more exotic in origin.

“We’re a specialty nursery. We don’t sell things other people do,” Evans said.

Joseph said his most unusual plant is another African one — Welwitschia, a one-of-a-kind plant with no other species in its genus. “They live to 1,500 years and they are unrelated to anything,” said Joseph.

The nursery propagates about 25 varieties of aloe, not just the common variety. “Most people think aloes are Aloe vera,” Evans said.

Customers are surprised to encounter the Aloe dichotoma, or tree aloe, in the shade house. The shade cloth above it had to be cut out a few years back, said Joseph, when the plant began pushing against it. It is currently about 12 feet tall. It’s not for sale, but its descendants, in varying sizes, are.

When Joseph isn’t meticulously propagating plants or fixing greenhouses, he is talking to customers.

“He is so generous with his time,” said Bob Schmalzel, a field biologist who had stopped by Thursday for information. “He is an encyclopedia, but there are a lot of encyclopedias that are closed books. This guy will share and share.”

The business is well known in the local plant community and among collectors, but longtime residents are often surprised by it, Evans said. Entrance to the nursery is at 50 E. Blacklidge Street, around the corner from the former flower shop.

“I get customers all the time who say, ‘Why didn’t I know you were here?’”

The mural was conceived partly to remedy that situation.

Evans said she had admired Rock Martinez’s monumental, “Mayahuel: Goddess of Agave,” mural on the side of Benjamin Supply (the historic Tucson Warehouse and Transfer building) downtown and had thought of having him paint a mural on her building.

Then a customer walked in wearing a T-shirt designed by Martinez that she thought would make a nice Christmas present for Gene. She ordered it online and, just before Christmas, got a call from the artist himself, who apologized for not having the right color in the right size in time for Christmas.

She said she’d take a different color and mentioned wanting a mural. He delivered the shirts and checked out her building, then quickly called back with some ideas. It was completed this week and unveiled to customers on Saturday.

The mural, which frames the 84-year-old flower shop, is a colorful assemblage of oversized cacti, succulents, pollinators and, of course, some “living stones.”

Marriott name removed from hotel near University of Arizona campus

There is no charge to adopt a desert tortoise.

Daily Dish column calls winery one of "five to try" in 2017.

Its GMO label has affected funding for further research.

Joe Pagac is painting the mural at Sixth Street and Stone Avenue.

Rock Martinez, right, and his assistant Fernando Leon work on the mural for Plants for the Southwest nursery, at 50 E. Blacklidge Drive. The mural will have a formal unveiling on Saturday, and Martinez will be on hand to discuss the work.

The nursery grows some common Sonoran Desert plant varieties, but most of its plants are more exotic in origin.

Plants for the Southwest nursery, located at 50 E. Blacklidge Drive, also sells the pottery of local artists. Many of the plants will come in pottery bowls. The nursery has been in business since 1986. 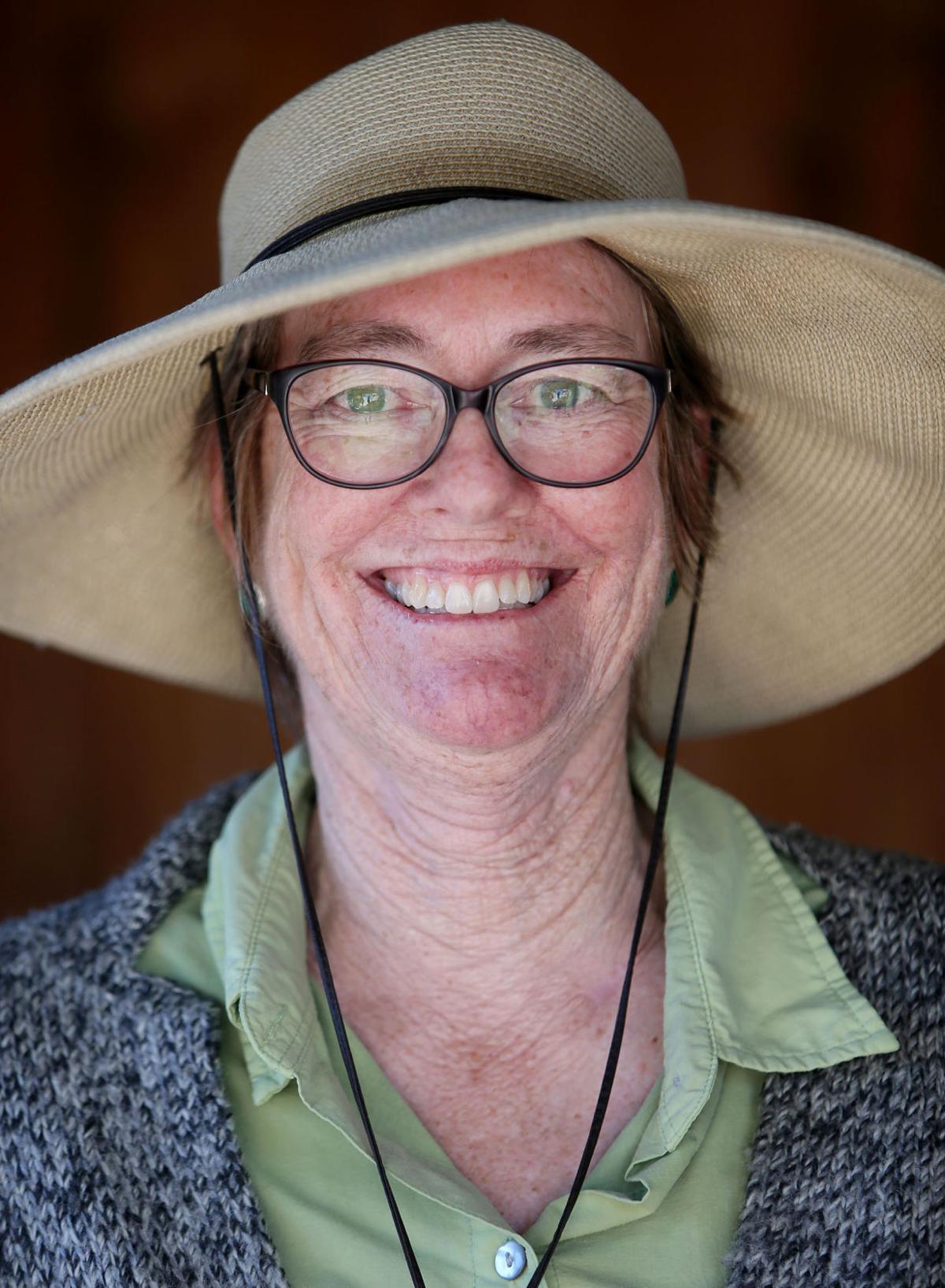 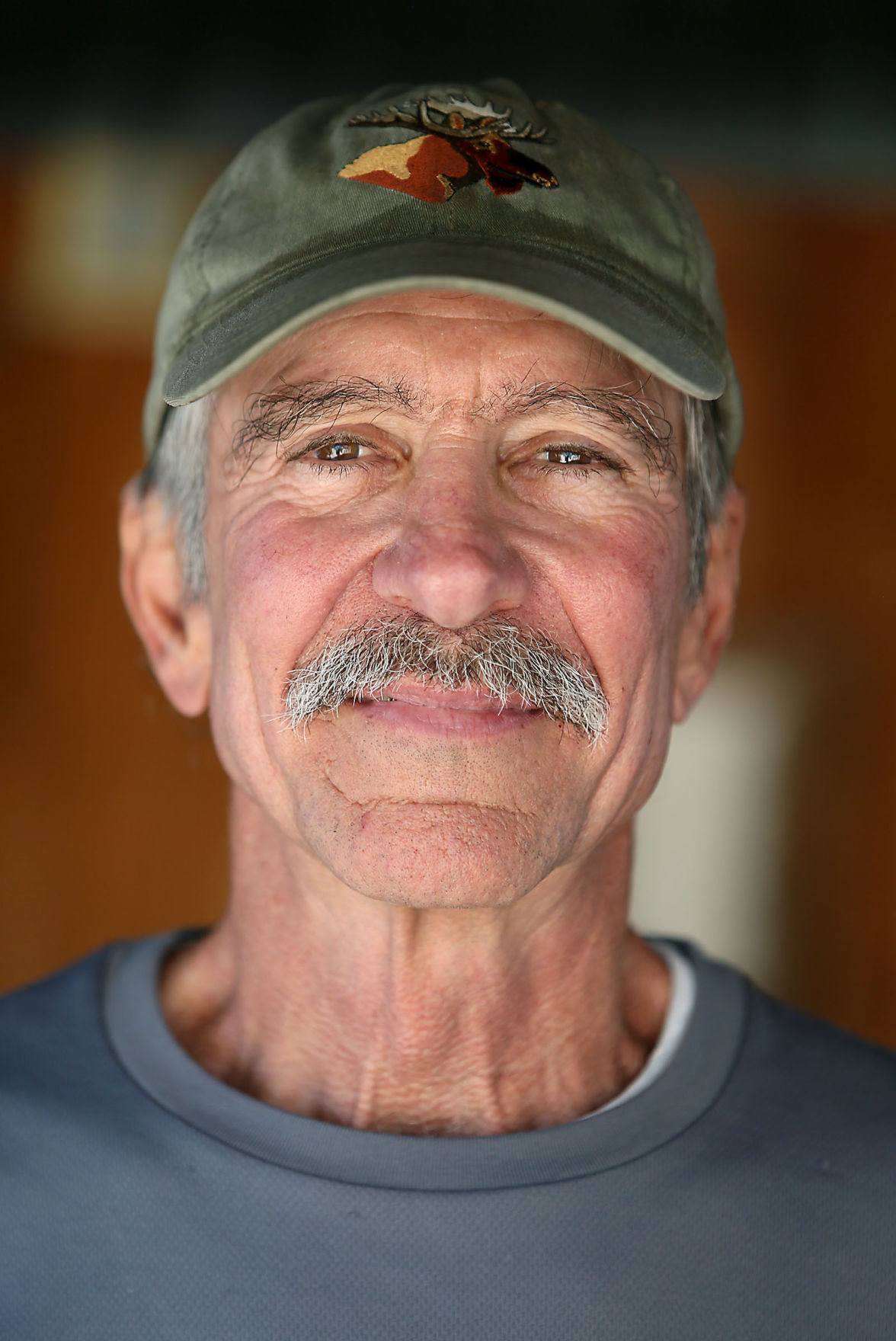