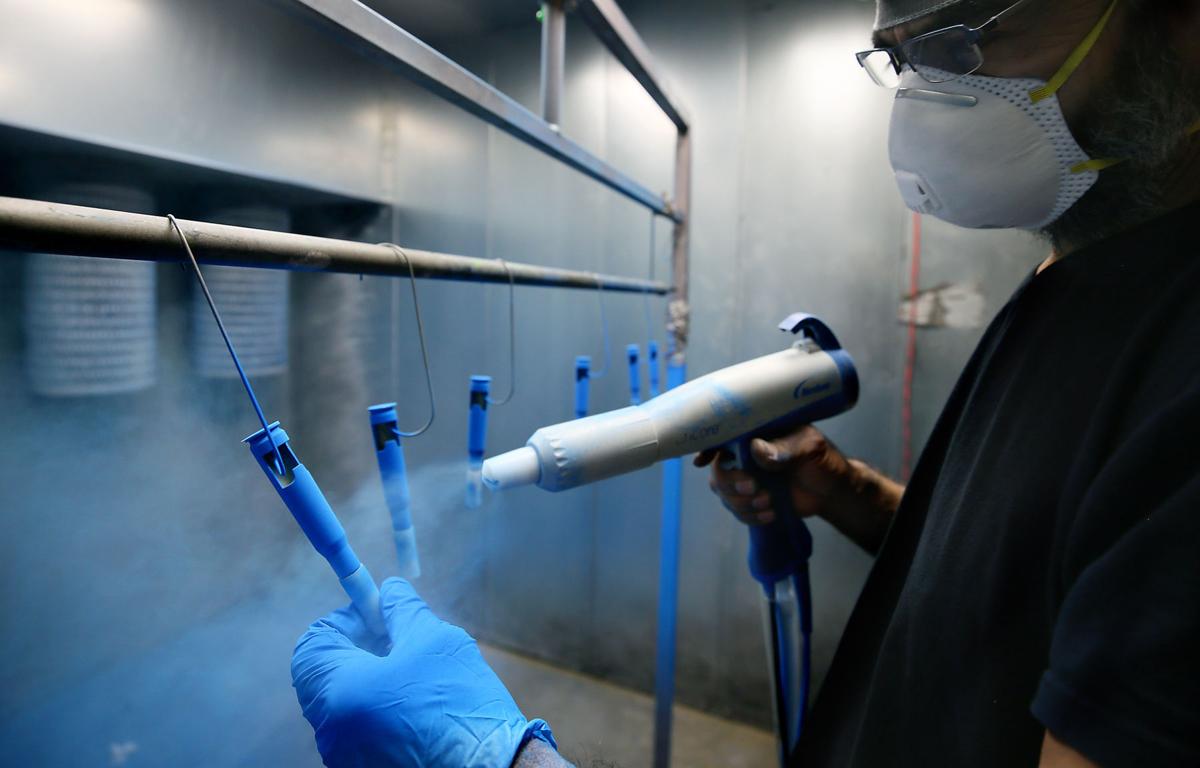 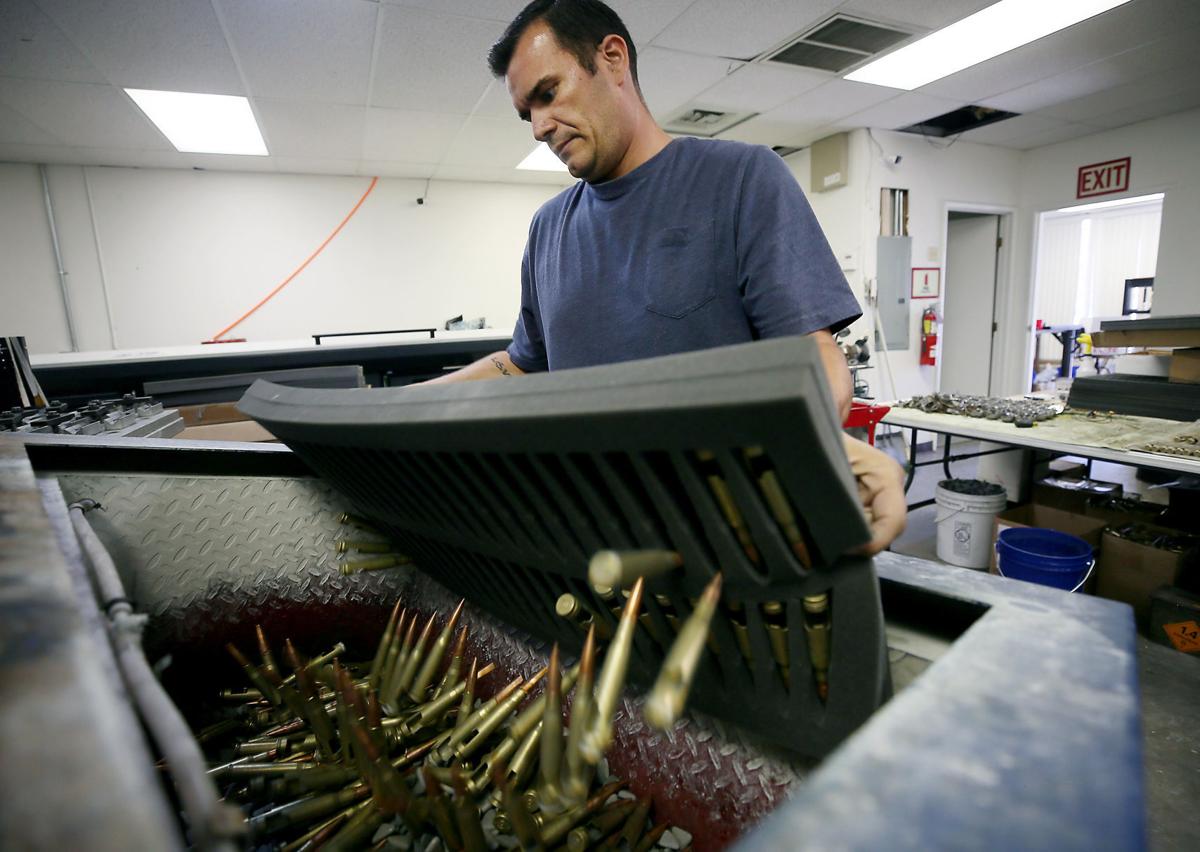 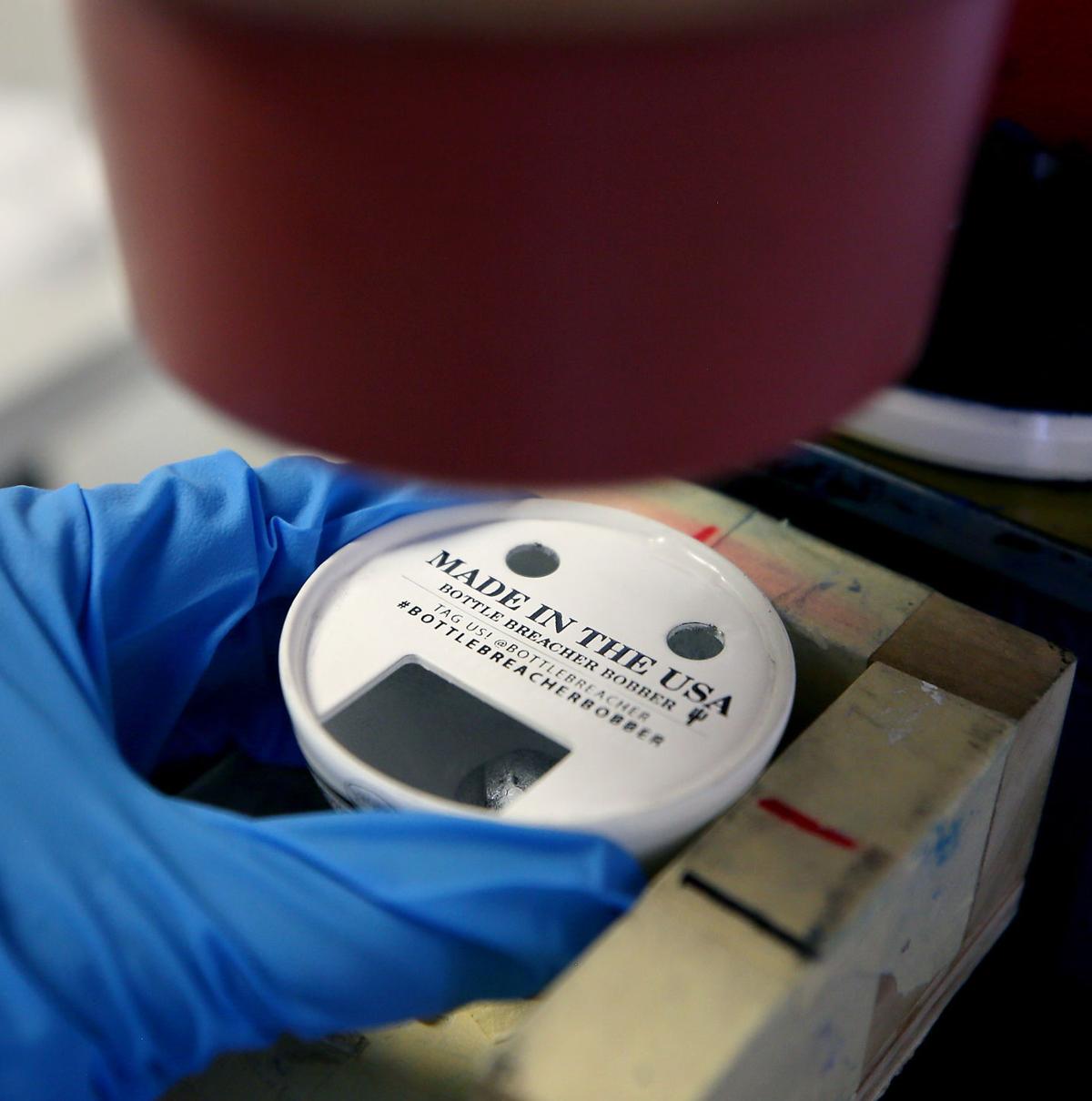 A pad printer places a stamp and logo on a Bottle Breacher product. The company’s owners were featured on the ABC show “Shark Tank” in 2014. 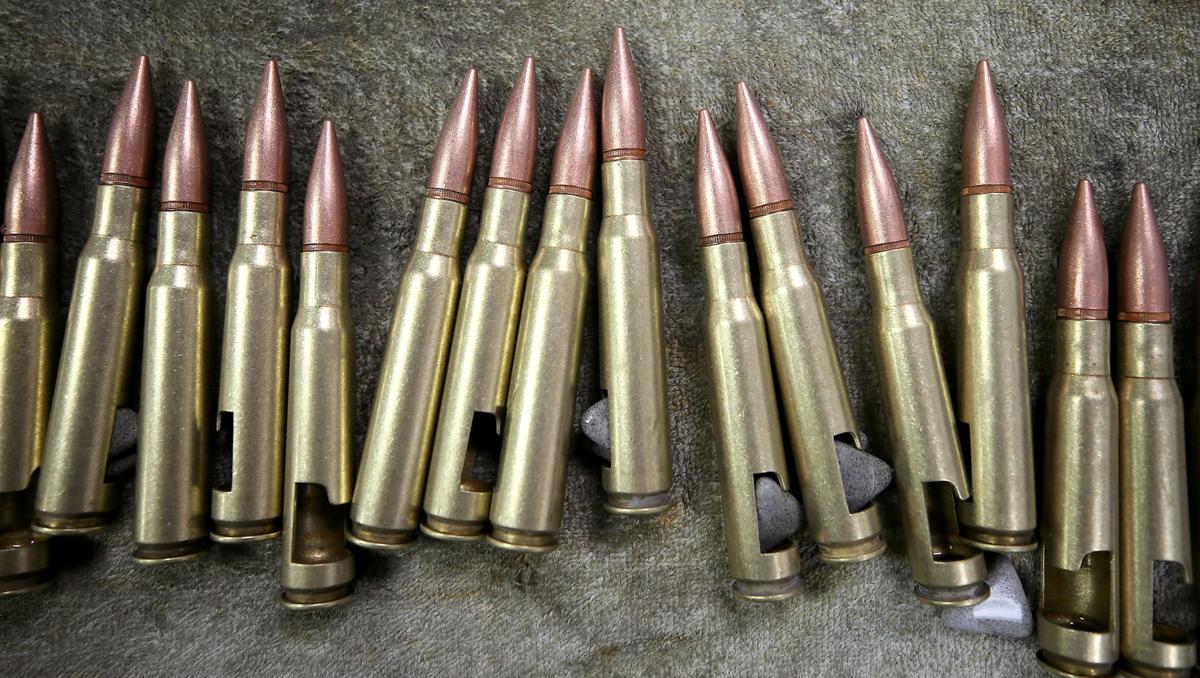 After 30 minutes in a vibratory tumbler, the .50 Caliber bottle breachers lay out to dry before they are power coated and engraved. The owners, Eli and Jen Crane were featured on ABC’s television show “Shark Tank,” in 2014. The business is located at 1870 W. Prince Road #22. Bottle Breachers are made from dummy ammunition. Monday June 12, 2017.

Each spring, the University of Arizona’s Terry J. Lundgren Center for Retailing holds its annual Global Retailing Conference, where top-level executives hear about the latest retail trends from industry luminaries like Vera Wang and Tommy Hilfiger.

Lundgren Center director Scott Hessell wanted something different, focused on retail entrepreneurship — and more conducive to shorts and flip-flops than pinstripes and pantsuits.

So on Sept. 15, the center will host its first Ideas to Doors conference, featuring a panel of retail entrepreneurs including Tucson-based Bottle Breacher, whose business selling bottle openers made of .50-caliber bullet casings took off after striking an investment deal on TV’s “Shark Tank.”

The daylong event at the Fox Theatre will feature a panel of retail entrepreneurs, including Bottle Breacher — the only Arizona-based presenter — and the founders of six other retail businesses: custom shirt-makers Proper Cloth and Taylor Stitch; excess-inventory garment seller Renewal Workshop; Oak Street Bootmakers; online womenswear boutique Shoptiques; and Lovesac, which operates a chain of stores selling a line of modular couches.

The panel will be conducted in a conversational style at the Fox, and the event is intended to have an informal feel, with casual apparel encouraged.

In that spirit, admission is free for UA faculty and students with CatCards, and public admission is a fraction of the cost of the Global Retailing Conference.

Hessell, who has been director of the Lundgren Center for two years and a UA faculty member for nine, said the 22-year old Global Retailing Conference brings together some the greatest minds in big retail, but he felt something was missing.

“When a lot of people think of retail they think of stores like Walmart or JC Penney,” he said. “But the vast majority of retail companies are small companies.”

And while whenever a business sells something to an consumer, it’s retail, that relationship can take place in a store, online or on the streets.

“What I’m trying to highlight at the conference is, there’s lots of different ways an individual can start a retail business,” said Hessell, who has consulted for numerous startups mainly in the medical sector.

Bottle Breacher, founded by ex-Navy SEAL Eli Crane and his wife, Jen, is a good example, Hessell said, recalling how when he first approached the Cranes about Ideas to Doors, they didn’t even consider their company a retail business.

In fact, Bottle Breacher is a retailer and much more.

Bottle Breacher takes raw materials including empty bullet casings and makes them into a finished product sold directly to consumers.

Eli Crane got the idea in 2009 while serving as a SEAL in San Diego, after his brother, a Marine helicopter pilot, gave him a bottle opener made from an ammo cartridge he bought in the Philippines.

The novelty item was a hit with his friends, but Eli thought he could make it better, and maybe even build a business around it, as he considered his future after more than a decade in the Navy.

“My initial goal was to get $500 in supplemental income from it,” Eli recalled.

He ran the idea by his wife, a 2005 graduate of the UA’s Eller College of Management who already was running an online inspirational print business on the craft site Etsy. She approved and began applying her online marketing skills.

The Cranes launched the business on Etsy in San Diego in 2013, while Eli was still in the service, and within six months, the couple was doing $7,500 a month in sales, with Eli cranking out openers in the garage.

After Eli separated from the Navy, the Cranes moved back to Tucson, where Eli and Jen met while she was finishing Tucson High School and he attended the UA.

Bottle Breacher got its big break when after repeated tryouts, the Cranes got on “Shark Tank” in 2014 and attracted $150,000 in investments split between sharks Kevin O’Leary and Mark Cuban, each for a 10 percent stake in the company.

The business took off from there, growing to sales of $2.5 million and a staff of more than 30 within a year in Tucson.

Along the way, the Cranes have learned some valuable and sometimes hard lessons, but they are sticking with their “Made in U.S.A.” business model, along with a practice of hiring veterans when possible and donating a portion of proceeds to veterans’ charities.

The company does all its design, manufacturing, finishing, engraving and online sales from its headquarters in a small industrial park on Tucson’s north side.

Eli says he’s been told that the bottle openers — which retail at prices starting at $20 for plain models — could be mass-produced overseas for one-quarter of the company’s current cost.

The couple learned some hard lessons about the power of marketing and the importance of branding as well.

After the “Shark Tank” appearance, the company’s website was overwhelmed and crashed. Though the Etsy site was still up and helped the company over the hump, Eli recalled getting nasty comments about the inability to fill orders and even got a text from Cuban, who was getting heat on social media over the situation.

One transformative moment came when O’Leary commented that Bottle Breacher’s logo wasn’t prominently on the product, which initially was made with logo stickers.

Eli did some research and scrounged up the money for a laser-engraving machine and started etching the company logo on its openers.

And that capability led to a whole line of custom-printed Bottle Breachers for markets such as wedding groomsmen’s gifts — still a company staple, Eli said.

The company’s Bottle Breacher opener line includes stock and custom commemorative etched, mirror-polished and powder-coated models, some with layered paint jobs where laser engraving is used to reveal colors underneath for an eye-catching effect.

Besides weddings, the openers are marketed as corporate and promotional gift items, often with military or hunting themes.

More recently, the company has expanded into openers shaped like round hand grenades, which split in half to reveal the opener slot, and it is using a similar design to make meticulously painted baseballs.

For some entrepreneurs, getting a product on the store shelves of a Walmart or other big-box retailer is seen as a path to riches.

But the Cranes aren’t sure if they would want to move into big-box retail, even if they could.

Sticking to the “Made in America” model means Bottle Breacher might never be able to hit the price points needed for mass retail, while positioning the Bottle Breacher as a premium, customizable product justifies the prices.

“I don’t know whether Walmart would ever be a good fit for us,” Eli said.

Besides its own website and Etsy, Bottle Breacher sells through Amazon.com as well as a few small retail outlets.

The UA’s Hessell said he hopes students and other attendees are inspired by the Cranes’ entrepreneurial spirit as well as the entrepreneur speakers, noting that most are sole founders of the companies.

“They each had an idea, a unique way to create value, and they did it,” he said. “More than anything, I want people to be inspired by that.”

Jen Crane said she was attracted by the conference’s informal format and likes the idea of showing students that entrepreneurship is a valid option after graduation.

“It’s come as you are, and I feel like business to a lot of people is intimidating. People think they need to work in corporate to get experience,” said Jen, who spent six years working at Wells Fargo before taking the small-business plunge.

“I feel like it will give hope to students that you can graduate and start a business out of college, and like the conference name says, you can actually take ideas to doors and make something happen quickly.”

Cost: UA students, ​staff, ​faculty ​free ​with ​CatCard ​verification; other students and faculty, $20; all others, $95 (prices increase after Sept. 8)

New technology, the human touch and doing what you love are what professionals say will make the future of retail “awesome.”

A pad printer places a stamp and logo on a Bottle Breacher product. The company’s owners were featured on the ABC show “Shark Tank” in 2014.

After 30 minutes in a vibratory tumbler, the .50 Caliber bottle breachers lay out to dry before they are power coated and engraved. The owners, Eli and Jen Crane were featured on ABC’s television show “Shark Tank,” in 2014. The business is located at 1870 W. Prince Road #22. Bottle Breachers are made from dummy ammunition. Monday June 12, 2017. 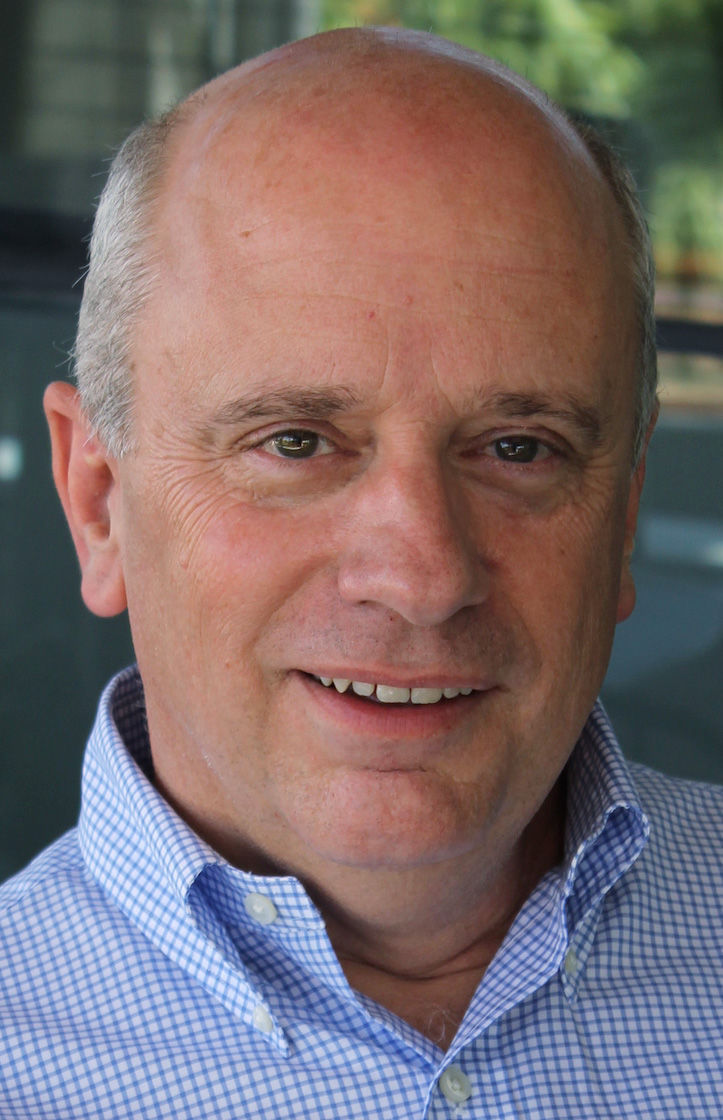 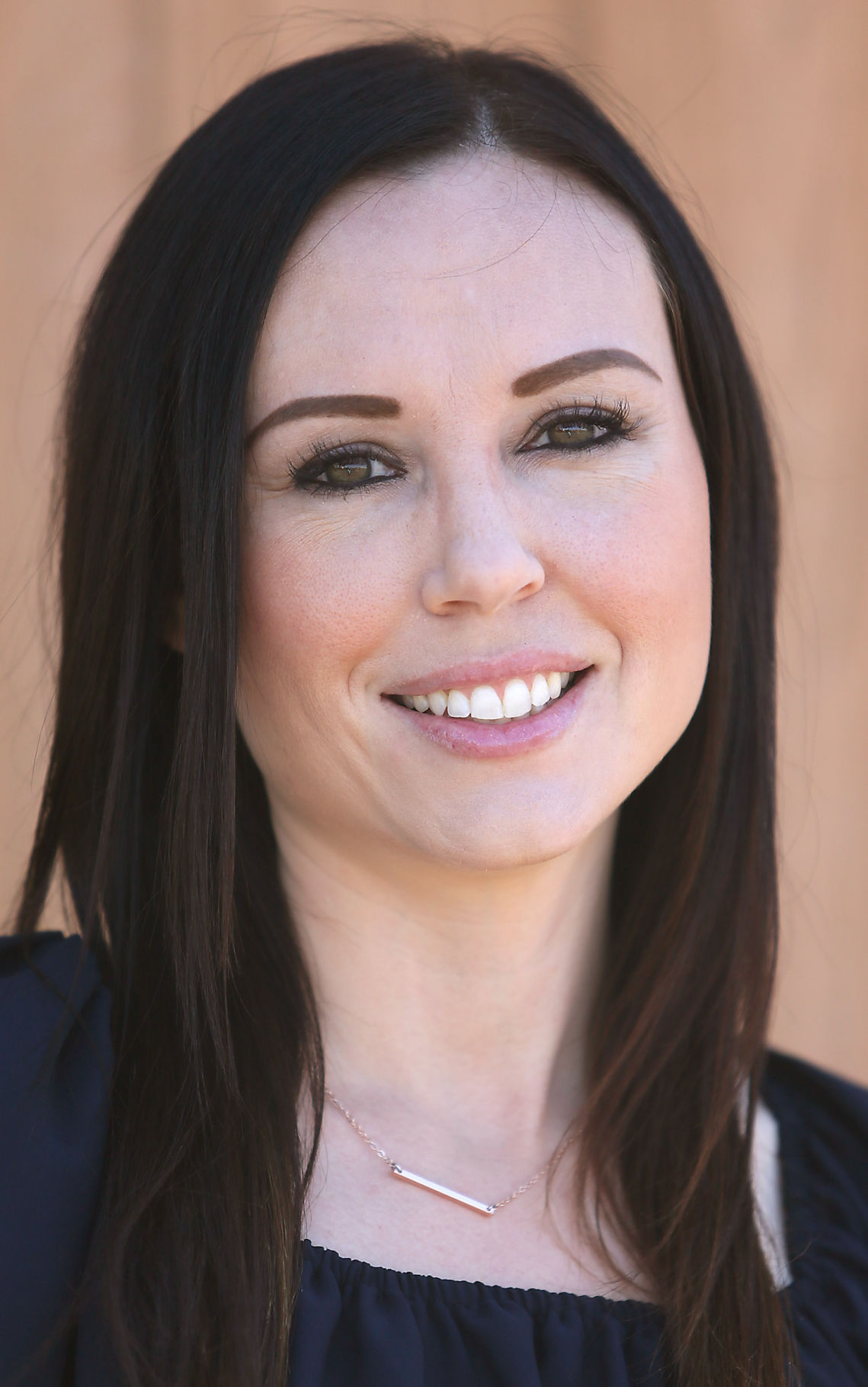 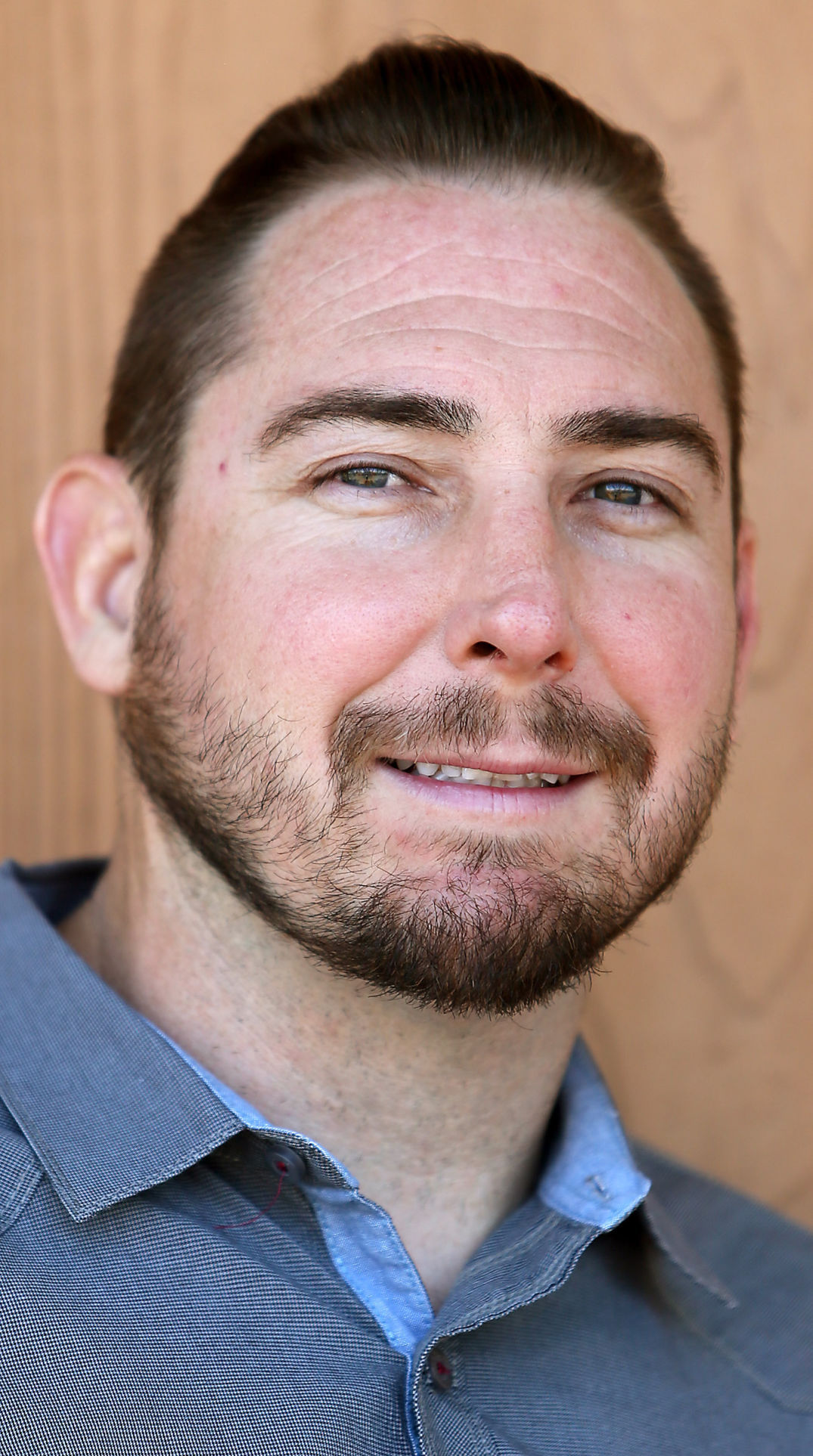