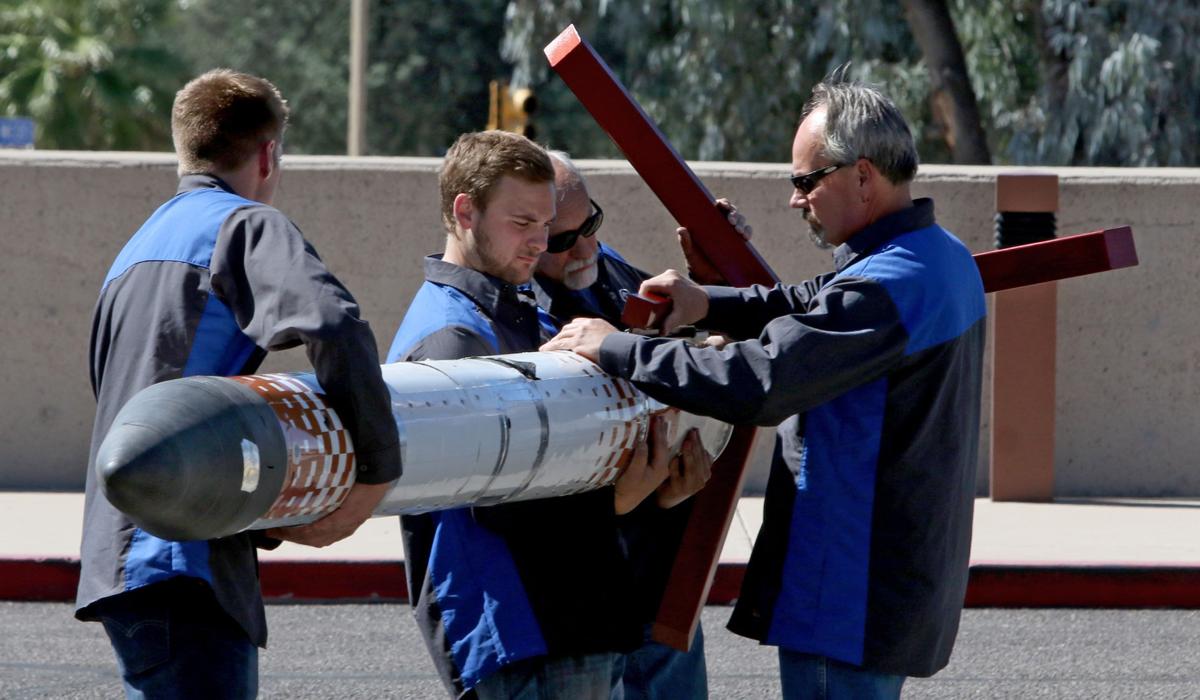 A display Vector P20 rocket is set up for the announcement that Vector Space plans to build its headquarters in Tucson. 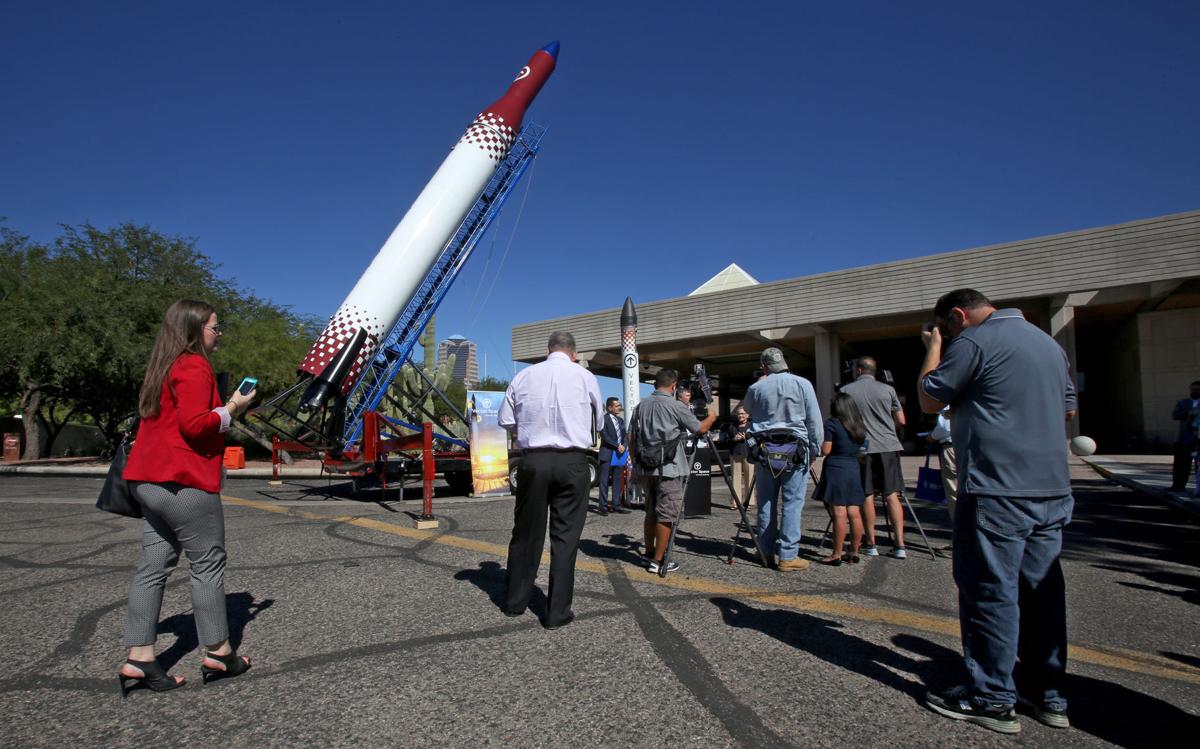 A Vector-R was on display Thursday for the official announcement that Vector Space intends to build rockets in Tucson that will carry small satellites into space.

That’s according to a presentation given Wednesday by County Administrator Chuck Huckelberry to the Title Security Agency Tucson Fall Summit.

“We expect that at least half of these jobs could be announced by the end of the year,” county Economic Development Director John Moffatt, who also presented at the summit, said in an interview Thursday.

A copy of the presentation, provided by Huckelberry, lists the industries but not the names of the companies; the number jobs each might bring and average pay.

The average annual salary for the 3,543 jobs is $79,100, higher than the $70,000 average for those expected to be hired by Vector Space Systems within the next three years.

When in active negotiation with companies considering locating in the area, county officials are often barred from naming companies or giving other specific information by nondisclosure agreements.

One potential employer, listed as an “engineering/manufacturing” business, would bring an estimated 1,975 jobs at an average salary of $110,000. That company’s announcement is among those likely before the end of the year, according to Moffatt.

Moffatt emphasized that there is no guarantee all of the deals will come through, but that they’re also “not speculative.”

“We think that we are finalists. We have a more than reasonably good chance for acquiring those jobs,” he said.

Two of the eight were efforts “initiated” by the city of Tucson, with the county “seriously engaged” in most of the remaining six, Moffatt said, adding that the likely announcements show “the benefits of a regional approach” to economic development.

In at least one of the deals, Moffatt said, the county is considering assistance comparable to that provided to the space balloon company World View, for which the county built a launch pad, headquarters and manufacturing facility at a cost of roughly $15 million. World View is expected to pay those costs back, and then some, over the course of its 20-year lease.

The World View deal has been criticized by Supervisor Ally Miller and is the subject of a lawsuit filed by the conservative Goldwater Institute, which alleges that the arrangement violates the Arizona constitution’s gift clause.

Arrangements with the other companies would be more “straightforward” and could involve workforce training and the use of Foreign Trade Zones, which can lower property tax burdens, Moffatt said.

As previously reported by the Star, biotech seed giant Monsanto and Pima County are negotiating a possible incentive package that would substantially reduce the property tax burden of a planned Monsanto greenhouse in the Avra Valley, in an expanded Foreign Trade Zone.

Vector Space Systems plans to open a Tucson headquarters and manufacturing plant to make rockets for launching small satellites into space. It could employ as many as 500 people within five years as production ramps up, said its co-founder and CEO, Jim Cantrell.

Vector plans to invest roughly $19 million during the first three years, and possibly as much as $50 million over the next 15 years, according to Pima County officials. It expects to open in 2018 at a county site south of Tucson International Airport.

Vector is interested in a “market rate” ground lease of the county-owned land, Huckelberry said.

County Administrator Chuck Huckelberry won't say much yet about what he calls "Project Corn."

Planned jobs at Vector Space, WorldView can help grow an industry hard-hit in recession but important in Arizona.

Its 155-acre purchase stirs questions about what might go there besides the seven-acre greenhouse.

Board also sets fees for Section 10 permits, which allow developers to kill vulnerable species in some areas of unincorporated Pima County.

Funding comes after economic development announcements in the area.

County gave Monsanto records to Goldwater, kept them from Star

A county spokesman calls the release to Goldwater Institute a "grievious error."

Rent will be adjusted every five years to keep up with inflation.

The rocket company is showing off its Vector-R rocket at NASA's Kennedy Space Center.

A display Vector P20 rocket is set up for the announcement that Vector Space plans to build its headquarters in Tucson.

A Vector-R was on display Thursday for the official announcement that Vector Space intends to build rockets in Tucson that will carry small satellites into space.