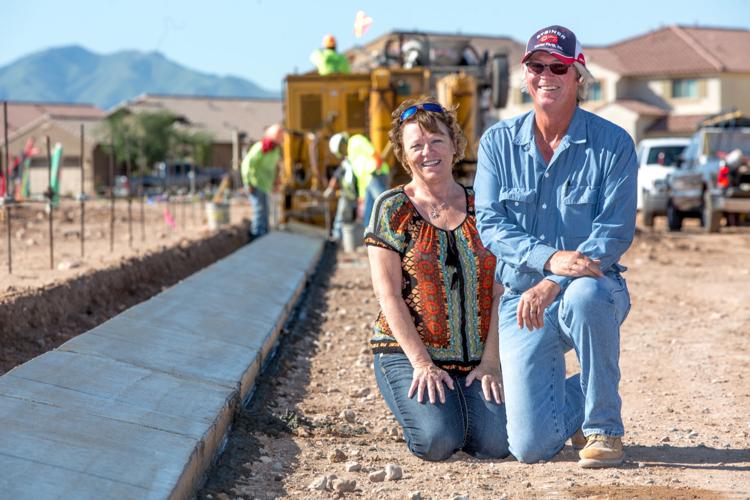 Gwen and David Howell, with Doulos Concrete Inc., got help from the Small Business Development Center in honing a business plan. They recently purchased a curb machine, expanding their business opportunities. 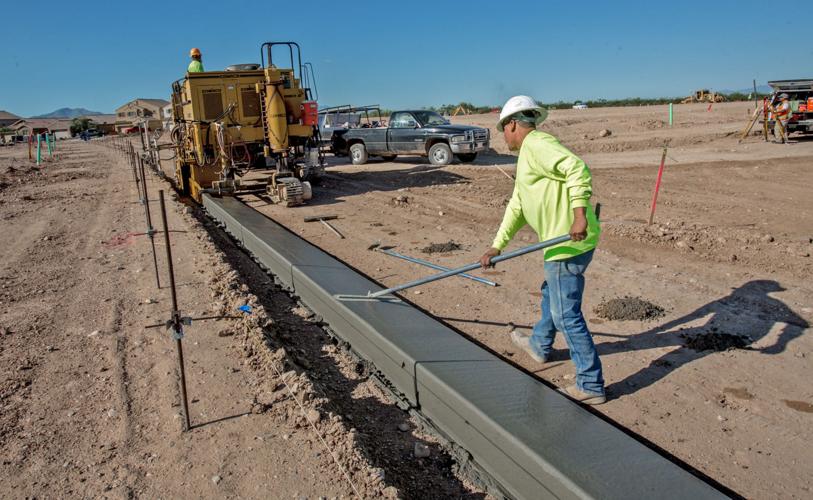 Finisher Henry Durazo, with Doulos Concrete, smooths curbing laid down in a subdivision east of Tucson. Doulos has 20 employees, and its average contract is $100,000.

A little over a year after starting operations, Doulos Concrete is going strong, thanks to help from business resources available for entrepreneurs and veterans.

The company, which handles mostly infrastructure work — including curbing and sidewalks that go into subdivisions, box culverts, scuppers and light poles — is on track to make $2.5 million in sales this year.

Although they never quite envisioned running their own business, owners Gwen and David Howell saw an opportunity they couldn’t pass up.

David Howell worked for Dodds Concrete Co. for 25 years. When owner Jed Edwin Dodds passed away in 2014, Howell offered to take over the business. Camilla Dodds, who had run the company along with her husband, agreed to sell the assets but not the name.

Howell then needed two things to get going, he said, his contractor’s license and a bunch of money.

They would essentially be continuing a business that had been in Tucson for more than 30 years, but they would still need to prove to a bank they were a worthwhile risk.

Gwen and David Howell took a course through the Women’s Business Center of Southern Arizona on how to write a business plan. Gwen Howell, who had retired from the postal service as a supervisor, had experience with communications so she wrote the plan.

“It was 100 pages long,” she said, and didn’t meet much initial success. So the Howells turned to the Small Business Development Center.

“The biggest thing I see with business plans is people put so much fluff,” said Ellen Kirton, who heads the Pima Community College SBDC. “A bank sees that and all they want to know is, what’s my risk?”

Gwen Howell is also a veteran, so it was natural for them to participate in the SBDC’s annual Veterans Conference. Held in December, the free event has vendors and resources aimed at veterans who want to become entrepreneurs.

With a streamlined business plan in hand, the Howells met a banker at the conference who was willing to work with them. They got a loan from Stearns Bank for $275,000.

While there are many misconceptions about what’s available for veterans, Kirton said, there are resources available.

Through the Pima County-run Kino Veterans’ Workforce Center, Gwen Howell was also able to take a QuickBooks class, which costs about $550, at no cost. Half of their loan fee was also waived as part of help for veterans from the Small Business Administration.

Doulos Concrete started its first job in March of last year. David Howell’s experience and his former employer’s reputation helped companies that worked with Dodds Concrete, including Desert Earth Contracting and O’Leary Construction, continue to use them.

“If it wasn’t for them, for me to go out there and start this, there’s nowhere I would be even close to the amount of work we do,” he said.

Doulos now has 20 employees and its average contract is $100,000. But being new to the ownership side of things sometimes still makes him nervous, Howell said.

“We might start a job and bill for it at the end of the month but we might not get paid for 90 days,” he said. “You’re talking 2½ months from the time you start something to the time you see a check. That’s kind of scary.”

Fortunately, he said, the partnership with his wife, who handles administration and finance while he handles the construction, makes things a lot easier.

“She’s a lot smarter than me. … She has her part of it and I don’t worry about it,” he said. “Hopefully she feels the same way.”

Gwen and David Howell, with Doulos Concrete Inc., got help from the Small Business Development Center in honing a business plan. They recently purchased a curb machine, expanding their business opportunities.

Finisher Henry Durazo, with Doulos Concrete, smooths curbing laid down in a subdivision east of Tucson. Doulos has 20 employees, and its average contract is $100,000.